Good afternoon…blustery to say the least with gusts, as of this writing to almost 40 MPH. Temperatures are warming up as well…mostly in the 70-75° range. Clouds are predominant but there are some breaks. Our cold front is still well west of KC but it’s on the move and tomorrow will be a vastly different day. Our main concern continues to be tonight as a line of storms will be forming along the front this afternoon and moving towards the region after 6PM or so. Some of those storms may be severe.

This afternoon: Mostly cloudy and windy. Also humid for late October. Highs into the mid 70s. Winds gusting to around 40 MPH at times.  An isolated shower or two not out of the question in a few areas…but nothing long lasting.

Tonight: Storms are likely along with the potential of locally heavy rains of over 1-2″ or so. Some of the storms (at the onset) may continue some strong straight line winds…but the worst of the weather will only last for under 1 hour (if not less than that). Rain winds down towards the wee hours of Sunday morning.

Sunday: Some clouds around in the morning then turning sunny, breezy and cooler with highs in the mid 60s. Winds will be lighter in the afternoon.

So far so good regarding this well advertised cold front that’s moving towards the region. The front right now is still towards the west of the KC region. The 12PM surface map has a little something for almost everyone…including a cooler air mass in the western Plains…and warmer and more humid air mass in the KC region…and a dry punch of air moving in from the deserts of the SW US across far western TX. The leading edge of that is the orange line through the TX Panhandle. 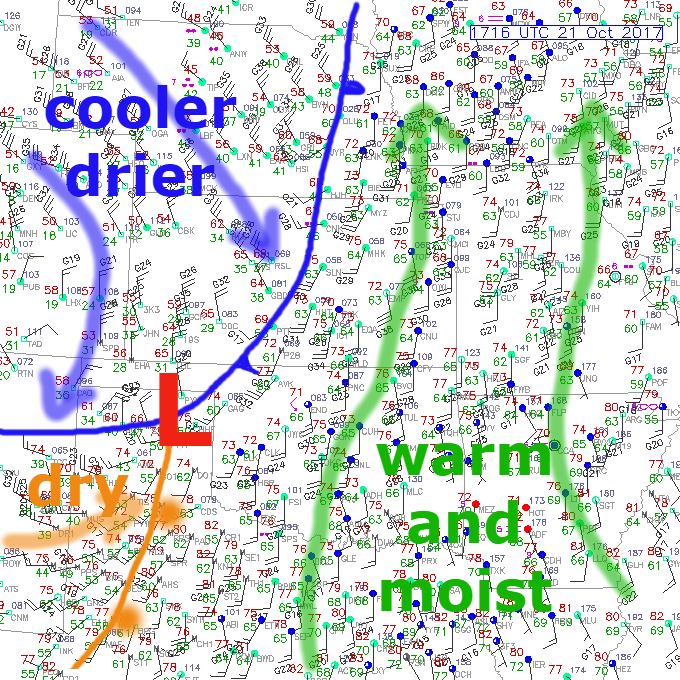 With these air masses battling each other…storms have to form given the right conditions…and what is going to set the atmosphere into even more motion is a disturbance that will be moving through the Plains this afternoon and tonight. That will help make the atmosphere more unstable later today. That should set of storms to the west of KC later this afternoon.

Once the storms form…the entire line will move towards the east while the individual cells move more towards the NE or NNE. They will will be booking at close to 45 MPH. The main concern with these storms is strong straight line winds. There has been a subtle northwards pull of the “enhanced” risk of severe storms into SW MO. Again the main threat appears to be 60-70 MPH winds with the storms. There may also be some hail within 1-2 hours of the storms formation, odds favor that might be more towards the west of KC. IF the storms produce hail closer to the state line…odds favor 1″ or less type stuff (mostly).

The latest satellite picture shows the flow of moisture…

The front itself will move through before 8-9PM in the KC metro area…there should be some leftover rains behind the front but then the rains will clear out…and we’ll have cooler weather tomorrow. The temperatures may conceivably drop rather quickly from the 70s>50s over the course of a few hours. Areas towards the SE of KC from Marshall towards Clinton and Sedalia down towards Butler and Nevada will see the storms and the front arrive a bit later tonight. The risk of severe weather may be fading however towards central MO.

Let me put in the HRRR model for a rough idea how the evening will play out…check out your location.

Still expecting a pretty sharp cold front later in the wee bringing our first chance of a widespread freeze into the region…which is about timed out to average for the KC region. 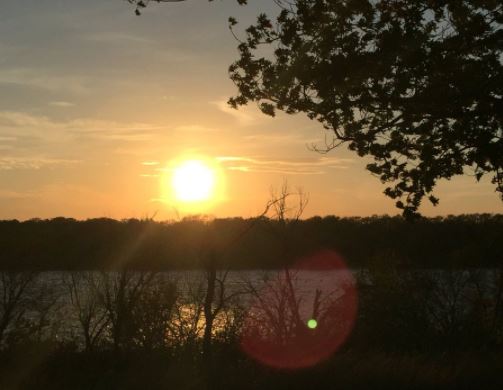