Yup..it’s time to buckle up. A very favorable snow pattern will establish itself in the region today and not change a lot for sometime…meaning we’re going to be very vulnerable to snow and with temperatures being cold…sticking snow. There are some wrinkles I’m sure over the next 10 day or so but at least from now till next weekend…we’re sort of set-up for “something”. In time we’re going to start eroding the cold air, especially above us…but that comes down the road.

When you have cold air at the surface and SW to SSW flow aloft…it’s a set-up for disturbances to ride quickly with the stronger winds above us and south of the area. Whether or not a strong storm comes out of all this well see…but we’re going to get chunks of snow today…over the weekend…and then sometime TUE>WED. By the time things are done…some may end up with almost 12″ of snow potentially or at least close to it.

Today: Winter Weather Advisory in effect. Snow winds down after 2-3 PM with pockets of snow through 5PM but the main accums will wind down after 3PM or so. Final tallies for many will be near 4-5″ with perhaps an inch or so less north of Downtown. Temperatures in the teens

Tonight: Clearing out and bitterly cold with lows near 5° (or colder) with enough clear skies.

Tomorrow: Gradual increase in clouds with more snow likely in the evening and overnight. Another 1-3+” is not out of the question. Highs in the 20s

Sunday: That snow ends with variable clouds and chilly temperatures and highs in the 20s

This is going to be a rare day for me…I’m off from work…which rarely happens when snow, of any significance, comes our way. I actually get to sit home and watch this one unfold. All the other storms, from the blizzard to the snowstorm last month, have been full work days for me. Today it’s just a matter of the blog…keeping you updated on Twitter (@fox4wx) and a post or two on FB (Joe Lauria Fox 4 Meteorologist). Give me a follow or a like there for additional more timely information, especially on Twitter.

So as I type this up at 8AM this morning…radar is lit like a Christmas tree with echoes…but the majority of what it shows is NOT reaching the ground…now this WILL change as the morning moves along…but at this moment at least it’s a study of dry air in the lower 6,000 feet or so of the atmosphere. The snow is falling above that but the dry air is evaporating the snow as it gently falls down. Every so often a flake or ice pellet will reach the ground…but the main event is still a few hours away.

Let me show you why…

Here is the sounding from the morning balloon launch from Topeka, KS. This was just received as the data is from the 6AM. 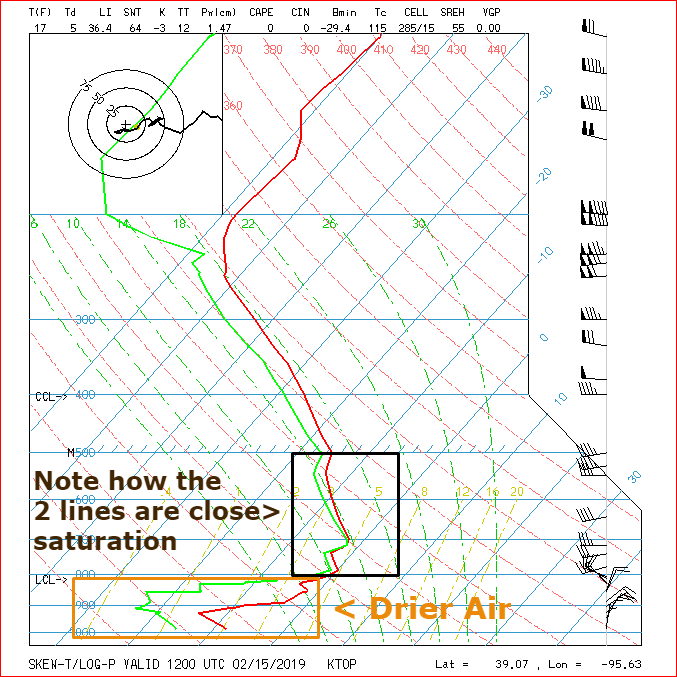 The dry air is from about 4,900 feet down towards the surface. So that needs to get saturated…and that will take some time.

You can tell the air is drier because the RED/GREEN lines are separated by a good distance. The red line is the temperature and the green line is the dew point. The farther apart they are the drier the air is…the closer together…like in the black box above the orange box, means the air is more saturated.

There is a sliver of 32.5° air at around 5,700 feet too…that might be the reason why there have been a few ice pellet reports. That won’t last too long as that area will drop below freezing in time this morning.

So there are still a few things that need to happen. We also are seeing a continued push of drier low level air. The morning weather map shows the dew points in the single digits as well.

Notice though to west of KC into central and northern KS and especially Nebraska. See the temperatures in RED and the dew points in GREEN? The more the separation of those two numbers…for example here in KC 14 over 6…the drier the surface air. To our west though look between the numbers See the * * indicators? That is light snow…3 *’s is moderate snow and if you ever see 4 *’s that’s heavy snow. The number next to the stars is the visibility

This is and was expected. Snow evaporating before the main show begins. IF this wasn’t happening we’d end up with closer to 6″ of snow…but this process will chew on that number I think.

With that said the snow that is reaching the ground west of the area…was expected to reach the ground…so the model data that I’m leaning on has done a reasonably good job with this (so far). It’s always a bit concerning (as I’ve mentioned for the last few days) that weak waves overcoming the dry low levels of the atmosphere with limited and not strong lift can underproduce. That’s why the 3″ range needs to be included in the forecast..just in case.

So let’s get into the radar…

Actually I like the trends in the last hour…saturation is occurring and at 8AM Topeka is reporting light snow. It’s just a matter of time.

Here is the latest HRRR model showing the snow moving into the area and exiting the area. This will end after about 6 or 7PM.

The 6AM run of the HRRR model shows roughly 4-5″ of snow across a good part of the KC region. 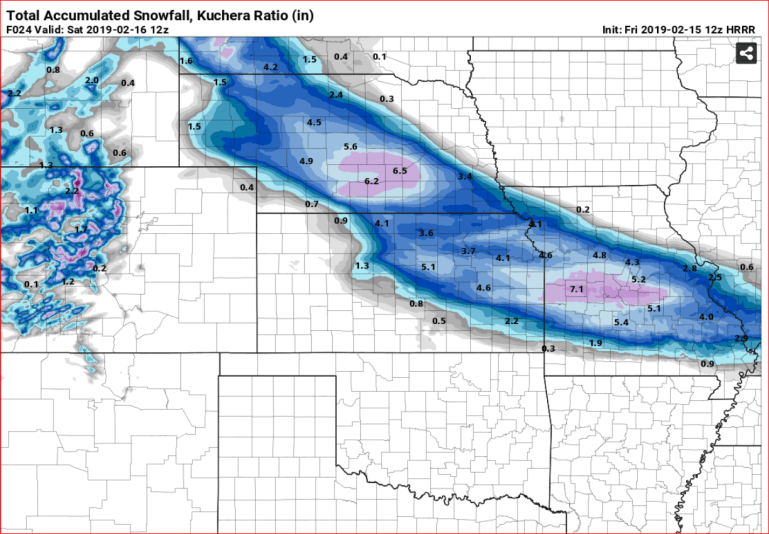 Note as well the pop in numbers towards the Lakes region and south of KC…indications of 6″+ happening down there. This is because there is some better “lift” forecast to happen down towards the south of US 50 and towards US 54

So with the majority of the snow coming through the late AM and afternoon, again with folks at work wanting to leave…this has a mess of an afternoon/rush hour in the making. Please see yesterday’s blog regarding this potential. I think the awareness is high enough…no one will be surprised so hopefully you, or those who you know are prepared and have made plans.

Most of the schools that were in session today (so many conference days were planned today anyway) are closed so that will reduce the number of people and kids/buses on the roads so that will be helpful.

As far as storm #2 goes…that is due in later tomorrow afternoon/evening and another 1-3″ is expected with that as well into early Sunday morning. The bulk of Sunday though will be OK but cold.

Then there is storm #3 which I think could be something more than what the models are indicating. As is they are showing a lower end accumulating system but I’m concerned this could be something more. The issue is if the upper wave locks into the SW part of the US…and just sends out a small fast moving ripple…or if more of the main storm out there is ejected towards the Plains. IF it’s more of the main storm…that could be a biggie.

So there is obviously a lot happening here…from strictly a meteorological standpoint it’s truly fascinating to watch. I totally get it though…I think the “when will Spring get here” crowd is increasing by the day and towards the end of next week it will be overflowing. Totally understand. I just don’t see it for quite some time to come…probably at least into the 1st week of March…the pattern just looks cold to me (mostly). The added snowcover won’t help either.

Blame it on the Groundhog! Early Spring? Ha!

In the time that it’s taken to write this…about 90 minutes…the snow has started here at the house.

Check in with Karli and Michelle for additional information and radar updates. I’ll be watching this from home.

Our feature photo comes from ‎Traci Anderson Savage‎ up in Jamesport, MO in Daviess Co. 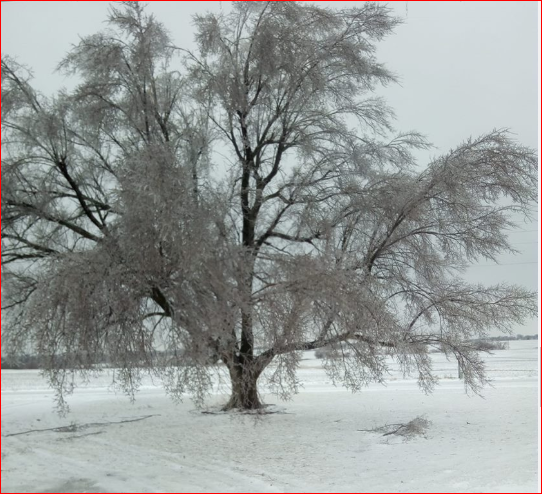