Good afternoon…another glorious and mild afternoon in the KC area as temperatures are near 80° and while the average high for today is closer to 75° when you get to late September>mid October especially, when the air is dry and the skies are sunny, you can get nice warm-ups after cool mornings. This morning we dropped to 50°…so today will be around a 30° warm-up. Not that unusual for this time of the year.

Saturday: Mostly sunny and pleasant with highs around 75°

Sunday: More or less about the same.

Monday (Chiefs): We should turn rather windy and warmer with highs 80-85°. Breezy for tailgating and milder for the actual game too.

The trick to the forecast is when does the next decent cold front come through the region? Right now odds favor Wednesday for the next more significant weather change around these parts as a Pacific cold front will move through…this should bring us at least some rain…and also cool things down towards the middle of next week…ahead of that front though we warm up…and that’s why I titled the blog “Maytober”.

A front will be moving into the Plains over the weekend…and will promptly stall in the midsection of the country on Monday. South winds ahead of the front will be cranking early next week…this will send more warmth up from the south into the area so temperatures will respond as the atmosphere get’s more “mixed” up. 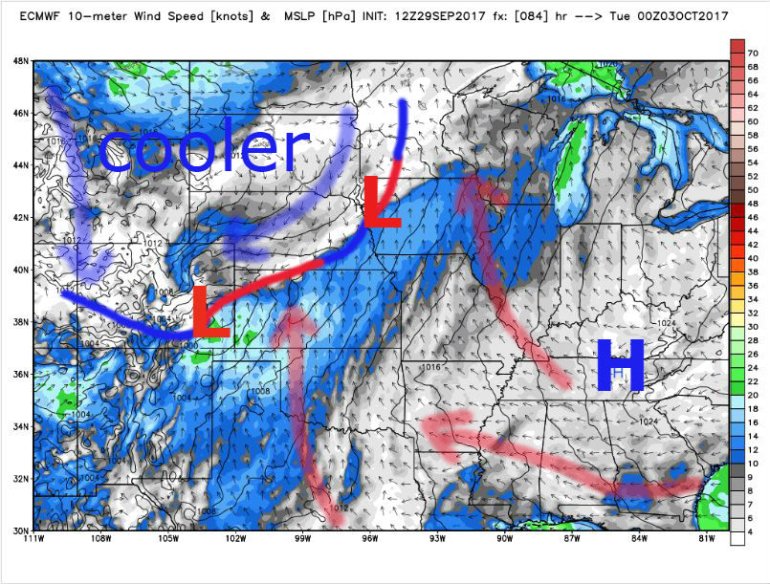 With the warmth comes higher dew points as well. You’ll notice that somewhat on Monday but should notice it more on Tuesday as dew points should get to be around 65° combined with temperatures around 85° (depending on clouds)…it will feel more like May.

Then later Tuesday into Wednesday the front should be moving towards and/or through the region…with the front hitting the moisture we should at least see some rain on radar…although the timing of the front may not work out for lots of rain coverage…we’ll see about that…but certainly behind the front it will cool down and that air flows in for Wednesday into Thursday. Here is the map for Tuesday at 7PM showing the front on the back doorstep. 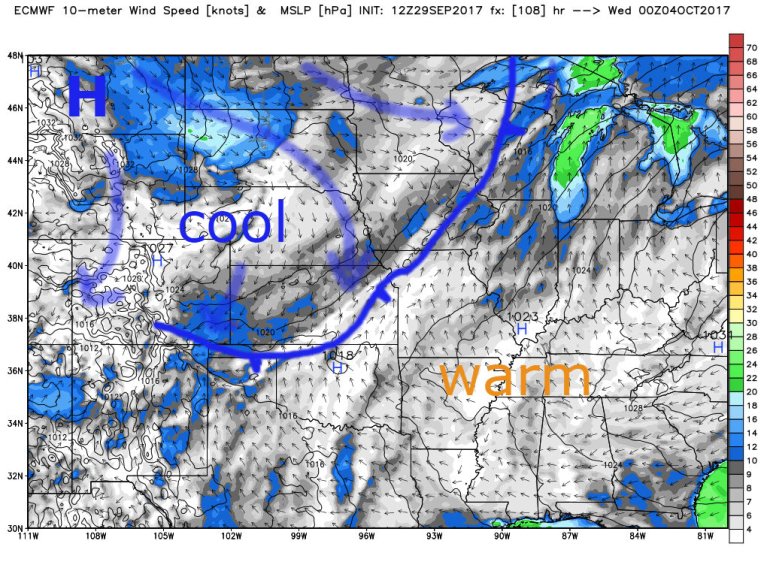 Remember air flows OUT of high pressure INTO low pressure. So that decent sized high building down the northern Rockies towards the middle of the week will allow the cool air to continue to flow out of it…

Something to watch for, and again this depends on the reality/timing of the front coming into the area…is on Wednesday there would be potential for seeing highs again in the 60s…like what we saw this past Tuesday. Then Thursday morning lows would be in the 40s. The GFS model is about 24 hours slower on this next quick transition…so it doesn’t bring the cooler air in till later Wednesday or Thursday. The strong S/SW flow aloft MAY mean the GFS might be more correct…if you split the difference…it would get here sometime on Wednesday around lunch.

Anyway sometime later Tuesday night into Thursday AM should be the next transition and I’ll time that out better over the weekend for you.

The longer term heading into October seems rather mild overall…with there be cold fronts with somewhat transient shots of cooler weather…absolutely. Will we see our 1st frost…maybe…our 1st freeze…possible but overall the month to me looks mild.

Drier than normal conditions forecast from the Southern Plains through Mid-Atlantic during October 14-27. https://t.co/GLrUcpze6h pic.twitter.com/JJtrSgeq3a

We can have some very warm and dry Octobers around these parts…in many ways from about 9/15 or so through 10/15 or so…at least to me, is the best time of the year.

Our feature photo comes from @akjimbo_51 … Thanks Jimmy! He was somewhere over Chicago at the time of the picture 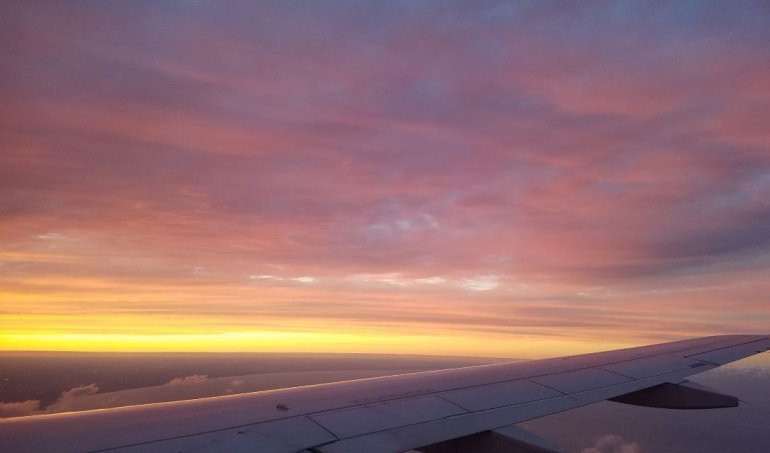 Can’t promise a blog tomorrow…not a lot to write about but I will try and get one out on Sunday.