A VERY springish day out there. Dew points have crept to near 60°…winds are cranking away and gusting to around 40 MPH and skies are partly cloudy as moisture is streaming up from the south. There is a dry line (more in the discussion) to the west…and a cold front west of that. There are pluses and minuses to the set-up for this evening and tonight and we’ll go over that shortly.

Tonight: Storms are still possible from 10PM-3AM or so. There is a question about how strong to severe they will be though. Until then though we’ll be dry for the rest of the afternoon. Temperatures this evening will be in the 70s before falling into the 55° range towards daybreak.

Monday (Home Opener): Looks like a real nice day with temperatures warming into the 60s for the tailgaters and between 65-70° for the game. Skies will be mostly sunny with west winds of 10-20 MPH

Tuesday: Some patchy morning frost is likely (gardeners take note) then sunny and pleasant with highs around 65°

It’s a storm conundrum for overnight. The latest surface map has many of the features that we look for for severe storms and perhaps with other parameters in play this forecast wouldn’t be such a challenge. The main issue is the cap, which in today’s case is a layer of warm air a few thousand feet above the ground that will be preventing the low level moisture in the form of the clouds closest to the ground that are out there now…from really developing vertically. How long that cap hangs around (probably through early this evening at least) will determine the storm chances overnight.

The 12PM surface map shows a dry line to the west of the area. This separates the moisture streaming northwards from the drier Plains air sweeping eastwards. It’s denoted by the orange line to the west in central KS 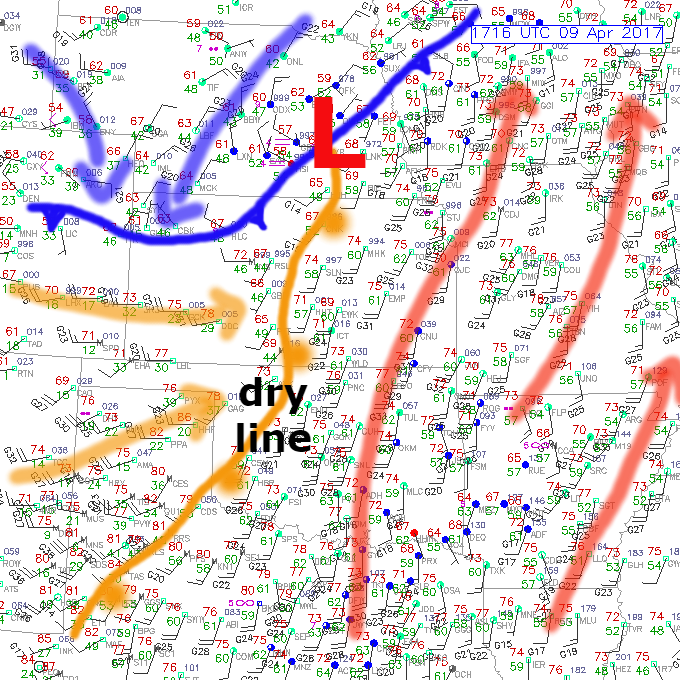 The blue line represents the cold front that will eventually catch up to the dry line overnight tonight and sweep through the area near 12AM. IF there are no storms ahead of that dry line this evening (possible) then the cold front itself may spark convection later tonight…after 10PM>2AM or so while it moves through the KC Metro. So there is another chance of storms (that makes for an iffy two triggers).

The issues though are this…as I mentioned there is a layer of warm air above the warm surface air that is developing through the region. This will prevent the clouds that are out there from developing into storms. That’s why we call it the “cap”. It’s like a lid on convection. 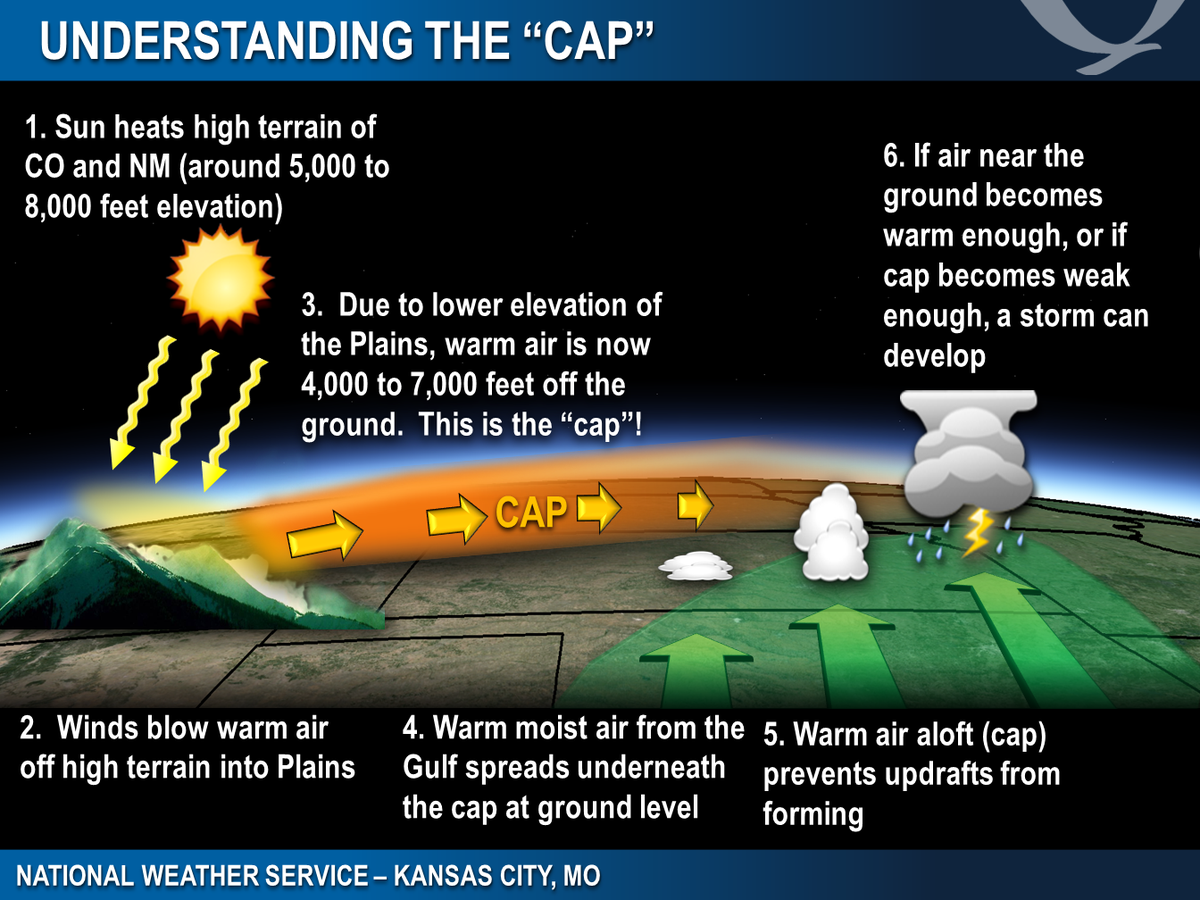 So I’m looking for a reason for the cap to weaken…an or move away. After sunset, and the temperatures cool…the cap may briefly strengthen. This is because the air will be even warmer above us compared tot he surface air since it’ll be dark. So now we really look for something to “cool” down this cap “warmth”.

There will be a front entering the picture but not until 12AM or so…that would definitely take car of the lower level cap in place…so I wonder IF perhaps the better chance of storms (probably not severe) may wait till later tonight into the wee hours of Monday morning.

One of our short term models, the HRRR, has been sending a signal since this morning about a couple of storms, somehow forming in KS…near the Wichita>Emporia region and moving towards the ENE. Here is the HRRR model from late this morning showing the situation around 9PM tonight via Pivotal Weather

The storms south and east of I-35 are somewhat suspect…I actually believe more in the storms to the NW of KC…those MAY try to form into a line and move towards the area.

The reason why I’m suspect of the initial stuff developing in KS is that I’m not convinced the cap will break as the model is showing…I have more confidence in the N MO and potentially NE KS possible convection connected to the front itself weakening the cap in place.

The air above though will be unstable this evening and any storms that try to form, assuming they tap into that air could produce some hail. So they will bear watching IF they develop…

Hence the conundrum for tonight.

We continue to be in a “slight” risk for severe storms…and as I expected it has been shifted further east towards MO compared to the outlook from yesterday. So it’s by no means a slam dunk..and many may not even get a droop of rain from this. There are pluses and negatives to storms tonight. One decent way you can keep track of this yourself is to look at the skies as the sun is setting tonight. Do you see any strong vertical development to the clouds (especially to your west or southwest on the KS side)? IF so that should mean the cap is breaking. IF you notice that occurring then storms are more likely in at least part of the area so start checking in with your radar app.

IF by 9PM or so you open your radar app and notice nothing happening…then the cap is holding strong and we may have to wait till very late tonight to see at least some storms show up on radar. 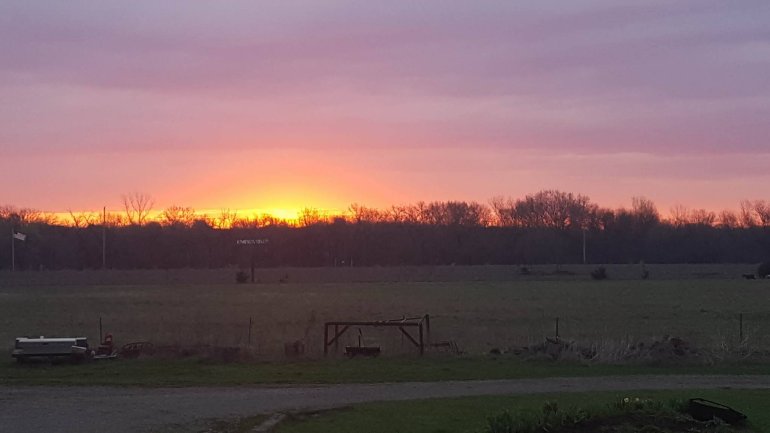