Another gray and cool day around the region this afternoon as low clouds about 1500-2000 feet up are preventing us from getting needed sunshine. North winds are also conspiring to keep temperatures on the chilly side of things. Considering the average high these days is in the lower 60s…well let’s just say we won’t get there any time soon I don’t think.

Tonight: Cloudy with perhaps a few patches of mist. Temperatures in the upper 30s to near 40°

Saturday: Cloudy with a thin spot or two in the clouds…highs in the 50s. Showers are possible in the evening into overnight

Sunday: Rain likely, especially during the AM although in the afternoon the rains may become a bot more scattered. Highs in the 50s

It won’t take a lot though to break out into sunshine and warmer weather…the problem continues to be this “stuck” moisture and a lack of wind above the ground. Both mean that we have to rely on the late March sun angle to help break up the clouds…

The thing though is that the moisture layer is thick above us. I looked at the sounding today from the NWS in Topeka…I wanted to see just how saturated the air was/is…and it’s really saturated above the ground. 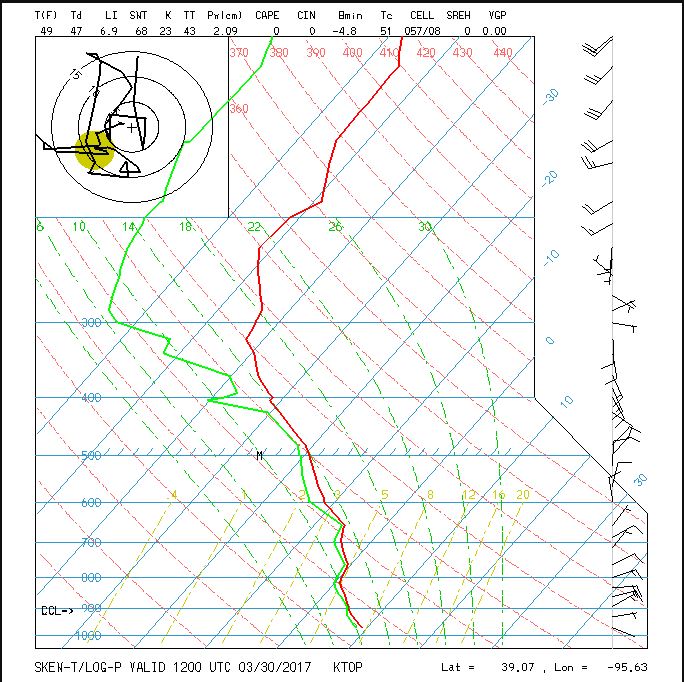 For the strictly purpose of this discussion…the red line is the temperature trace as the balloon soared into the atmosphere this morning…and the green line is the dew point trace. Where the lines are close together…that shows a saturated air mass. Where the lines spread apart farther…above the 400 mb level, or roughly 24,000 feet up…that’s drier air.

Basically you can see how the air is pretty soupy from the ground upwards. The winds at the particular levels are shown on the right hand side…not a lot of wind either…mostly under 15 MPH. So a deep saturated air mass…light winds…dry air above 20,000 feet up…and late March sun…NOT exactly a good recipe for a whole ton of cloud breaks….and that’s why the satellite image looks like this.

The clear skies are from about I-40 southwards. There may be a few breaks out there locally BUT with the air mass on top of us chilly…any sun creates instability and that instantly creates more clouds.

Our Sunday rain situation will be coming about because of another upper level storm…this one is currently in the SW part of the country. You can clearly see it spinning around out there.

That thing will get into the El Paso area Sunday then start breaking up as it passes south of here. With that said, it will send up little waves of energy that should set of rain showers (maybe a few rumbles) as the zip through the area. As I’ve mentioned I’m not expecting an all day rain on Sunday…but the 1st part of the day looks a bit iffy right now especially. Rainfall amounts look to be in the 1/4-3/4+” range with this.

Another system is due on Tuesday…and that will be watched for the potential of some late afternoon or evening severe weather chances. After that some chillier air moves into the region for a day or two.

Our feature photo comes from Shelby Sonof Richard down towards Blue Mound, KS. 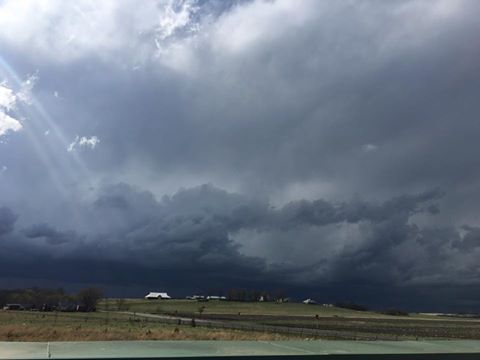 I’ll get a blog update out over the weekend.