Good afternoon on another bright and sunny day in the KC area. Temperatures are chilly but seasonable today and much like yesterday we should top off around 40°-45° before the afternoon is done in the area. There is still some residual sleet/snow cover out there and that is also somewhat cutting our high temperature potential. More on how this will play a role in the temperatures SUN>TUE in the discussion part of the weather blog.

Tonight: Clear skies and cold with lows near 20

Sunday: Increasing clouds and colder with highs near 30° IF we get too many clouds. It could be a few degrees warmer with some extra sunshine. Prepare accordingly for the football game…chilly for sure.

Monday: Cloudy and colder with highs only around 25°

Did you know that right now the sun is about 3 million miles CLOSER to the sun than in July. It happens every year in January and it’s called Perihelion. As a matter of fact if you feel like you’re moving faster than usual today, it’s because the earth is actually moving quicker in orbit today around the sun compared to in July…some 2200 MPH faster as a matter of fact (actually YOU”RE not moving faster…the planet is). so why is it cold now compared to when we’re farther away from the sun in July. It’s because of the TILT of the earth on it’s axis. Our tilt now makes the sun’s rays hit the southern hemisphere stronger than the northern hemisphere where we live.

We reach the closest point in Earth's orbit to the Sun later today. Why isn't it hot? Check out the graphic below pic.twitter.com/K1TFwUrskH

We’re so close we can almost reach out and touch the sun IF our hands were about 91.4 million miles long that is. Then again we’re probably be pretty good at basketball.

I saw this tweet yesterday putting the US into perspective concerning temperature averages for 2015. There were some cold months in the Plains, namely FEB and AUG but overall it was mild to warm.

Interesting to see the nationwide reversal from last FEB and this past DEC nationwide.

Please see yesterday’s blog about some potential longer range cold weather showing up for next weekend and beyond. It does appear that a 5-7+ day shot of nasty cold weather is coming along with some snow potential.  Again this is NOT the cold shot coming SUN>TUE of this coming week.

Take a look at the approx. 5000′ temperatures starting next FRI at 6AM…then every 12 hours…that is some nasty cold building southwards…it comes to us in waves, and the core hangs up across the northern Rockies waiting to come southwards. This is real deal cold weather…and it needs to be watched, especially IF we put down some new snow cover through the Plains.

There it is 10-days from now … 1050 mb Canadian high. Plenty of time to watch pattern change to winter. pic.twitter.com/D17k4ZUMBB

Meanwhile ahead of this major outbreak of cold comes an appetizer cold shot. What’s important to remember is that while our snow cover is slowly leaving…there is still quite a bit of snow on the ground north of KC.

So this is what’s going to happen tomorrow through TUE…

High pressure is going to build in from the northern part of the country and by later tomorrow moves into the Plains. Here is the weather map for 6PM Sunday…the circulation around the H (high pressure) will move a chilly air mass over the snow cover and bring it towards KC through the day and night on Sunday. 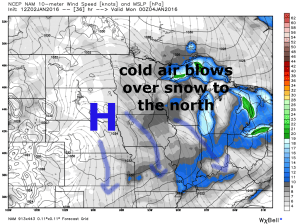 Now what typically can happen in these scenarios is that we can see a large area of very low cloud cover develop. The NAM and GFS model is VERY aggressive with this potential. They’re showing the clouds only about 1-2000′ thick or so. IF this happens, we may be socked in totally for a few days because those clouds would move/develop into the area…get stuck with the light wind regime in place and then have a tough time thinning on MON and TUE because of a LOT of upper level moisture moving into the area from the west. When you have that combo of stuck low clouds and thick high clouds blocking the sunshine to thin out the lower clouds…yuck.

The question is just how extensive will the low clouds be?

Regardless it will be colder Sunday through Tuesday. Odds favor 20s MON and hopefully near 32° TUE IF we get stuck in the clouds. These same clouds will keep the temperatures at night from dropping much.

There will be a couple of weak disturbances moving through the Plains from WED through FRI. One issue for WED would be what the surface temperatures are later WED should there be any light mist/drizzle that tries to develop. Odds are though we should be above freezing by then. The winds should be increasing on Tuesday so we’ll be fighting the wind chill factor later in the day especially.

That’s it for the weekend..I think I’m going to take a blog day off tomorrow maybe. I’ll leave you with this assortment of weather bloopers from TV stations across the world. I haven’t previewed this yet so good luck! Enjoy…what no “Lighting Of The Joe?”