A reminder…tomorrow at 9AM I will be posting a special…weather but not weather but weather blog. Please remember to check it out. I’ll then get another blog out sometime in the afternoon I hope. I’ll be filling in for KR in the morning so my day tomorrow will be a bit more chaotic so bear with me on the snow update part of the blog coming during the afternoon tomorrow. Also I’ll be on vacation starting Sunday afternoon…I’ll be doing the weekend shows though…and I’ll be away all next week without internet access so no blogs for awhile after my Sunday update.

Today: Pretty cloudy for awhile…maybe some light freezing mist/flakes. It may be a challenge to get much about 25° or so today.

Tonight: Variable clouds and cold with lows in the teens.

Friday: Mostly cloudy and not as cold with highs well into the 30s…maybe 40s in a few areas.

Saturday: Increasing clouds and cold with highs near 30°. Snow moves in later that night

Sunday: Morning snow ends then mostly cloudy and bitter cold with PM highs only around 10° or so.

Today marks the end of meteorological winter. For those who wonder why we do this…why we don’t just go by the astronomical seasons…this way makes record keeping easier…since the 1st day of Spring and Winter varies over the course of many years. This way we can just go by December 1st>the end of February and be done with it.

When you break down the numbers to the last 3 months…and this way change a few slots…this winter will “officially” finish as the 42nd coldest winter in KC weather history. Which is roughly in the top 1/3rd of colder winters. Not very exciting I think in terms of the perception many may have about what we’ve been going through so far…with more to come (especially on the cold side of things). 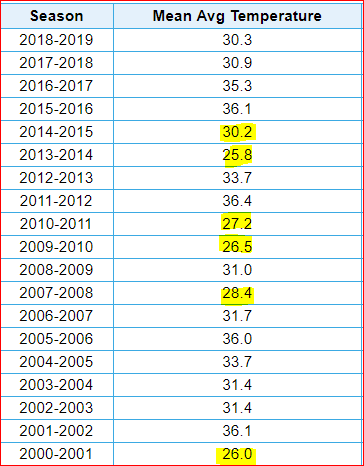 Perception can be a funny thing sometimes…

I think we know most all are worn down with the snow aspect of things…if we just look at the totals…going back to the start of October…and looking at how we rank when it comes to total snows over the course of a whole winter…we’re in the top 1/3rd again…down there at #32…but there is no where to go but up…and up we will go as we accumulate more and more snow over the coming weeks.

IF we look a bit deeper into those numbers…and look at how things have gone through today’s date…in other words comparing our snow so far this season, to other years snow through the end of February…we are running higher obviously. Now we’re up to 16th place. 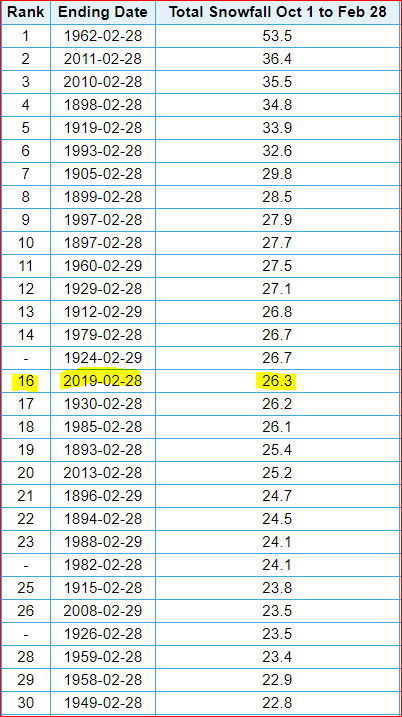 So yes it’s been snowy…and yes it’s been cold…but so far at least…in the Top 1/3 of many of the criteria we look at from a seasonal standpoint at least.

Now over the next 5-10 days, of not more…the average temperatures are really on the upwards trend. We’re getting close to 50° average highs now…and will be there next week. Needless to say you know we won’t be close to those values for days to come…our morning lows average closer to 30° and it’s possible we go sub-zero Monday morning. Obviously well below average.

This obviously isn’t a good look…and takes us roughly to mid month. I agree with this assessment as you have read for over 10 days now. There might be a milder day mixed in for a fleeting moment…but overall it’s still very cold for quite some time (compared to average).

Onwards to the weekend.

Most are now well aware of the snow coming…and this is still on track. We know that what falls will be a fluffy type snow. We know that this type of snow is efficient in accumulations and we know the timing appears to be later Saturday night into Sunday morning. I also strongly think that the snow will wind down quickly later in the morning Sunday and during Sunday afternoon we’ll see recovery on the roads etc.

I also know that bitterly cold temperatures are coming in too. Teens for highs and potentially sub-zero lows are possible into the early part of next week, assuming we have snow pack to deal with. We probably won’t set a record cold high temperature over the weekend, neither Saturday or Sunday…here are the coldest highs for Sunday. 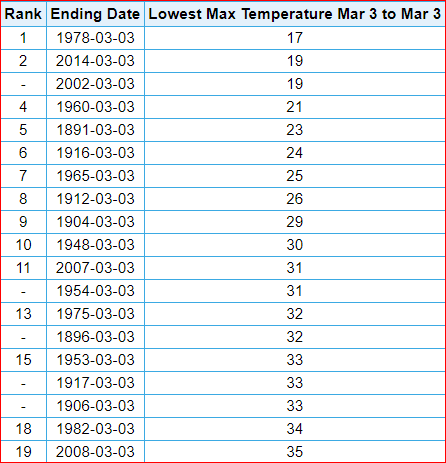 Monday however, the 4th…is likely to be Top 5 coldest 3/4’s in KC weather history…and #1 is not out of the question. 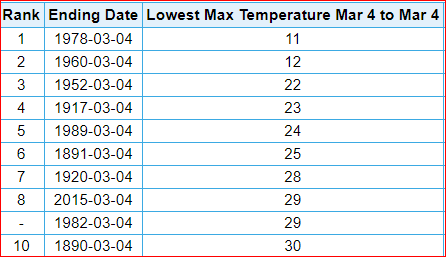 In terms of lows…it might be tough to get that cold…but it’s somewhat doable with everything working out perfectly. Odds favor a Top 5 coldest 3/4 in KC weather history as well. 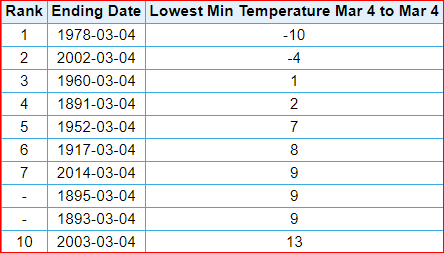 As far as the snow scenario…no significant changes. The NAM model did show a southwards shift to the best snow…still giving us 1-3″ or so…but the cutoff was perilously close to the north side of KC. The other models don’t show this sharp cutoff. Taken verbatim and factoring in the fluff efficiency…the GFS cranks out widespread 4-8″ totals…although it too shows a north of 36 highway to much lower numbers in N MO. The EURO was also more or less in the 3-6″+ range (again with the fluff factor in play on this). Actually the EURO ensembles from last night were slightly more bullish for totals.

There are issues as there always are from 3 days out…the NAM model does throw a yellow-ish flag out in a sense. The reason is that it seems to have MUCH less lifting going on (for a variety of reasons) in the mid levels of the atmosphere…the levels where you look for the best lift to create the best snowflakes. Look at the comparison below…showing the GFS model (slide right) and the NAM model (slide left). See the difference in the colors. The reds mean more vertical lift in the atmosphere

Lately however the NAM has done this from a few days out…not so much as lose the storm…but it has a couple of fickle runs before it corrects itself. Odds are it’s trying to figure out how things are going to play out as the system crosses over the Rockies. How many pieces will it break into?

We have to remember that this is a wave that is still not even close to the USA.

See that NOAA label in the bottom left…now look just above it and to the right…that’s the storm we’re watching.

That gets to CA on Saturday.

So where am I with this…as you know this is my outlet for some speculation…more so than what I would do on the air…let’s go to my tried and true probabilities. Obviously these are subject to change. (3PM Update)

OK this blog is long enough. Set a reminder on your phone for tomorrow morning..around 9AM or so. Trust me. 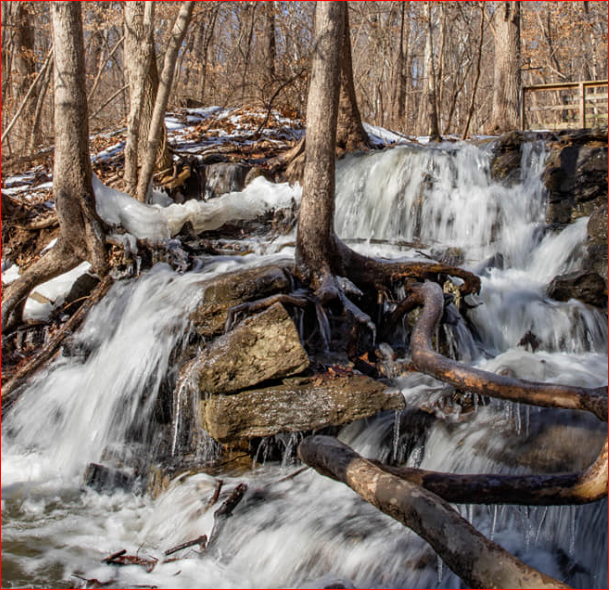 After a fabulous day yesterday with temperatures approaching 70°, today we sort of come back to where we should be in Kansas City in February. We don't have an arctic connection to the cold front that came through the region, so this is just a seasonably strong cold front that came into the region last night.

We had a midnight high of 49° and we may struggle to get to that level today with a mix of developing clouds and sunshine. Blustery conditions will develop and continue for the day. No moisture of significance is expected for a while it appears.

Joe’s Weather Blog: And now for something completely different (MON-2/20)

The temperature reversal that has been anticipated for quite some time has now started. Over the weekend, we warmed up into the 40s and now we've got 50s and 60s coming this way for a couple of days. There will be a seasonable pull back for mid week before temperatures start to creep back up to some degree heading into the end of the week.

More importantly and for the next 7-10 days there are no more signs of any arctic intrusions into the central U.S. That means we're more or less left to our own devices regarding the weather...subtle changes every so often with no big changes coming.

Good Friday to you. It's been a long stretch of weather around these parts. Bitterly cold temperatures, long lasting and grinding cold days and nights, snow but no big snows...just lots of snow opportunities lately and about 10 other things with the weather.

Things are going to be transitioning back to more typical late February weather days. That means some days are going to be pretty darn good, and others less good. We're going to see a realignment of the jet stream over the coming days, allowing the colder arctic air to retreat back into Canada and northwards. So that means we'll see a nice warmup, so much so that 60s are possible on Tuesday. Nice switcheroo!