Well the “table-setter” cold front is moving through the region as I type this. Temperatures have dropped from 53° at noon at KCI to 28° as I start this blog late this afternoon. This is the injection of cold air that was expected and this cold air will further deepen tonight into tomorrow morning. That sets the stage for a snowstorm tomorrow…with additional snows expected over the weekend and then something more significant (again) later Tuesday into Wednesday. I mentioned a few days ago on the air that the next 10 days may not be forgotten about by snow lovers (and haters) for a long time and that thought is still in my mind.

Meanwhile the snow situation tomorrow is concerning to me for a reason that I feel, at least in my opinion, is not getting paid enough attention too. IF you follow me on FB (Joe Lauria FOX 4 Meteorologist) you know about my concern already. More on that in my discussion.

Tonight: Clouds and colder with gusty north winds. Lows in the teens

Friday: Lowering and thickening clouds in the morning with snow developing later in the morning towards lunch or so. At first light it will then start to come down hard and several hours of moderate to potentially heavy snow in places is likely. Accumulations of 3-6″ (average) are likely. A Winter Weather Advisory is in effect for the region for tomorrow. Temperatures only around 20° Not a lot of wind though tomorrow mostly north at 10-20 MPH. Enough to make shoveling very cold!

Friday night: Snow ends during the evening. IF skies clear out temperatures will tank to 0-5°

Saturday: Increasing PM clouds with some light snow possible Saturday night into Sunday AM. Accumulations are possible (1-3″?). Temperatures in the 20s

Sunday: Morning snow ends then variable clouds and cold with highs in the 20s

So let’s start the blog with the headline of the blog. I have strong concerns about tomorrow’s weather. It’s not the fact that I’m expecting a 3-6″ snowstorm…and there are some signs that some may get a bit more than that…it has to do with the timing of the snow.

Here is the way the day is going to play out…and it is a mess in the making. Hopefully this doesn’t happen.

When folks go to work Friday…there won’t be a flake of snow out there. All good. Here’s the thing though…the snow will develop quickly later in the morning. Folks will be in the office watching the snow get harder and harder…and at some point in the early afternoon they may decide…you know what…I better leave to beat traffic. By the time they decide to leave there may be 1-2″ of snow on the ground.

They going to head north or south from downtown and they may find that others have decided the same thing. By then snow plows will be out treating and plowing the roads…they will do their best but the plow convoys…the extra traffic and the snow falling will slow traffic down more than normal for the early to middle part of the afternoon. Now we start seeing back-ups and the snow is increasing in intensity in the afternoon.

Now the folks who have been looking out their office windows are getting more nervous. They’re starting to hear from others about the crummy road conditions and how it’s taking XX long to go from point A to point B…and they are going to start seeing more traffic developing and slowing…so around 3-4 PM they’re going to decide to get out of work and head home. Now we’re adding many more cars onto congested roads.

The snow is really coming down good between 2-6PM or so…before it lightens up. Now we have the normal rush hour traffic leaving downtown KC and encountering all the folks on the roads already. You can only move so much traffic so fast when the cars are moving so slow. The plows now are being affected because they can’t efficiently plow the main arteries because there is too much traffic. Now you have big problems.

It’s a bad scenario that I hope doesn’t develop…but I’m concerned it will.

The same thing (maybe not to the degree of the snow amounts) happened last month in St Louis. 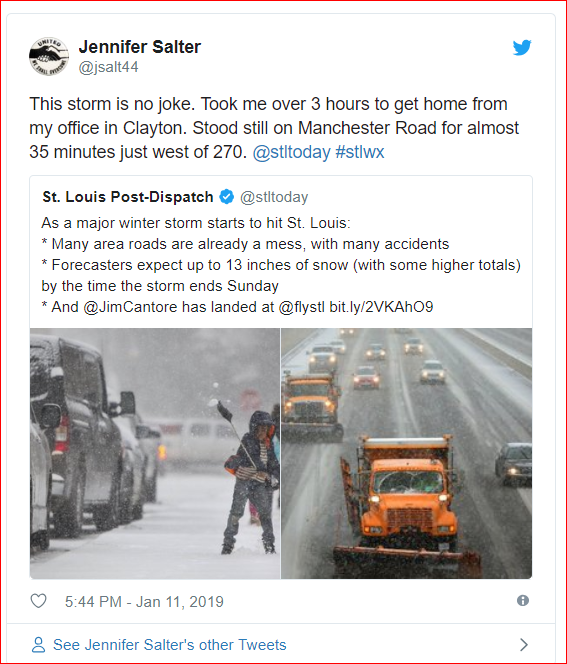 Now St Louis traffic is a mess on a dry sunny day…you add in 3-6+” of snow like what happened last month…in the afternoon…and well it wasn’t pretty.

See this article for a playout of the day via the St Louis Post Dispatch.

What I hope won’t happen…but I’m concerned will is this…pic via KTVI. 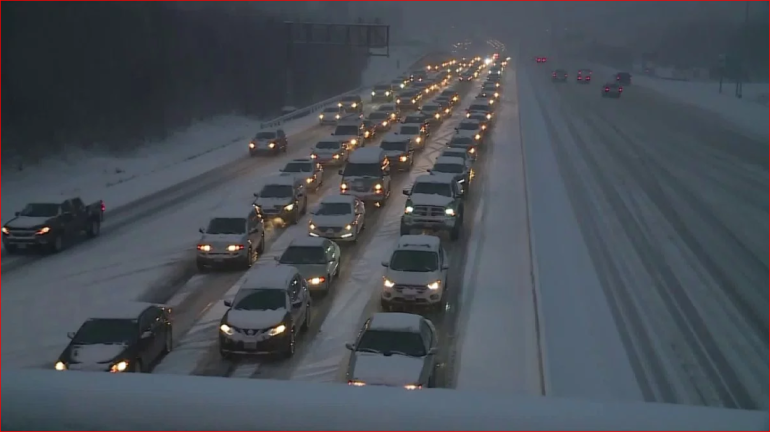 IF you are working downtown tomorrow…please watch the weather carefully. IF the snow comes fast and furious in the afternoon…and IF you have access to radar (and you will be checking out my blog) watch that carefully and leave at the right time. I’d hate for you to end up spending hours on an snow choked road. Make sure you have a way of keeping your phone charged as well.

Things are playing out as expected at this point. The snow will initially fight some rather dry air in the morning hours. This dry air will, in time, get saturated and we’ll see the snow, that is being evaporated…”snirga” as we were referring to it this afternoon at the NWS in Pleasant Hill, make it to the ground. Data today indicates that the dry air may chew on the snow for maybe 1-2 hours with the best snows starting in earnest by about 10AM-12PM from the west to the east. It should accumulate immediately and I think the potential is there for 2-5″ of snow by the evening rush tomorrow. Add on another 1-2″ after that as the snow winds down by 6-7PM and we come up with a solid 3-6″ forecast.

This will be the average. There is some data that suggests the north side may favor the lower side of those numbers while the south side favors the higher side of that range.

The other thing that perhaps is not getting the attention it deserves is the snow ratios. This won’t be a 10:1 snow event…1/2″ liquid equals 5″ of snow…this is a 13-15:1 ratio snow…and I’m concerned that IF we end up with 4/10″ of liquid (melted snow) that may end up being closer to 6″ of snow…so my concern is that perhaps a 3-7″ forecast may be a tad bit better. Regardless you get the idea that this will be a high impact event.

Can we miss out? Well we’re going to get something from this…the only way I can see lessor totals is 1) if the dry is is a bigger thing than I think it will be…and chews at the snow for a longer time period. 2) if the wave coming into the Plains, which generates this “lift” at around 10,000 feet is even more broken up or has less “lift”. The orange and red areas represent areas of higher “lift” in the part of the atmosphere where snow likes to form the most.

Here’s the thing…the latest model data indicates that some of the best “lift” will be sliding towards the SW/S of KC later in the afternoon. That is still a yellow flag to me…and is a way we can end up with the lower totals in the range above.

It’s something to watch in the overnight data. With that said these areas of mid-level lift can often be poorly forecast by the models, especially in systems that are somewhat “messy” and quickly flying through the area.

The snow maps from the morning blog are still pretty valid. Some slight upside to those numbers.

This is the evening run of the NAM model for the snowstorm…seems mostly reasonable to me. Note the heavier band a bit south of Downtown…let’s see how that trends… Graphic via Pivotal Weather 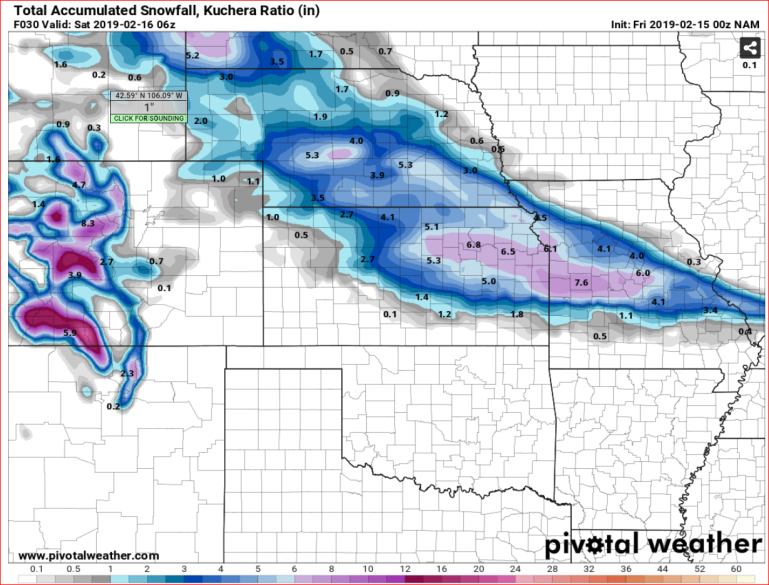 Again that heavier band of snow needs to be watched for shifting north or south.

Austin Hamilton has the feature photo of the day from a snowy Chariton, IA 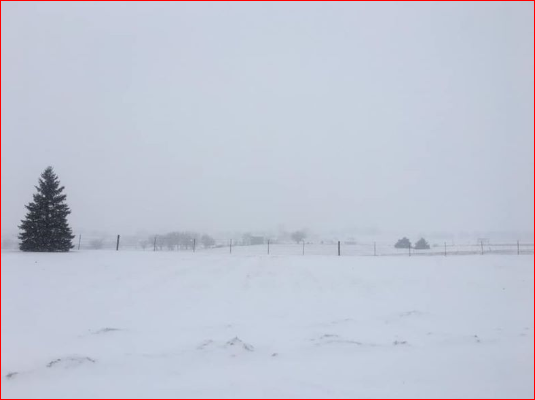 I hope I’m wrong about the traffic situation tomorrow afternoon.