Turning into a nice but breezy afternoon in the area today. Some high clouds are filtering out the sunshine but we’re in the 50s as I type the blog up this afternoon. I actually think there are more 50s coming this way over the next 7-10 days or so. Not every day obviously…there will be some chilly days mixed in…but it’s not a terrible pattern heading into the weekend before Christmas.

Tonight: Increasing clouds but not as cold with lows in the 25-30° range

Wednesday: Not as mild but overall OK with highs in the 50° range. Not as windy either

Thursday: Rain is likely…there might be some freezing drizzle at the onset in the area…mainly north of KC. Highs will really struggle…let’s go with around 35°

Friday: Lingering clouds with highs in the 40-45°. We may only be in the 30s IF those clouds hang tough all day…especially SE of KC 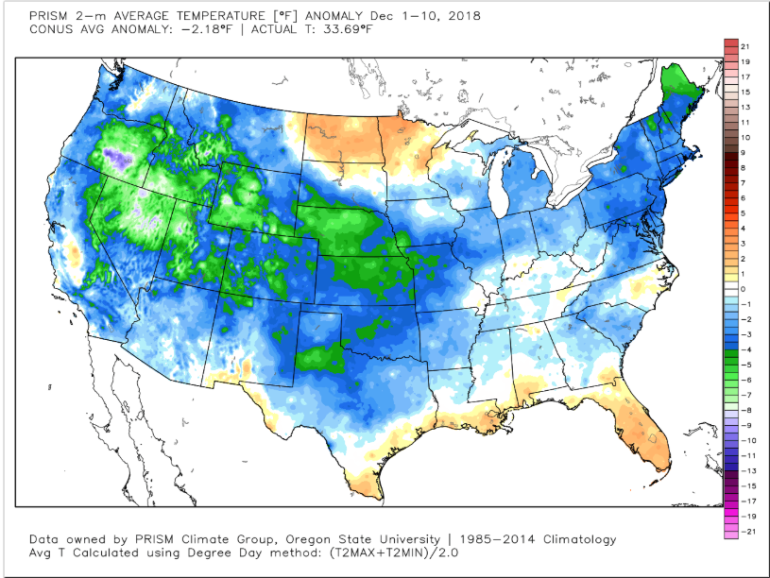 Here is something that I used yesterday on the weathercasts as part of my What Your Weather App Can’t Tell You segment. So far in KC we’ve had 8.3″ of snow…that’s more snow than the cities of Detroit…Minneapolis…Salt Lake City…Denver…and Anchorage, AK. Heck Lubbock, TX has us all beat with over 10″ of snow!

Today we’ve got a nice SW wind blowing…gusting to about 25 MPH so far…we’re 53° at KCI as of 1PM…we’ll go up another couple of degrees…and we’re ahead of a weak cold front that will push through the area overnight. 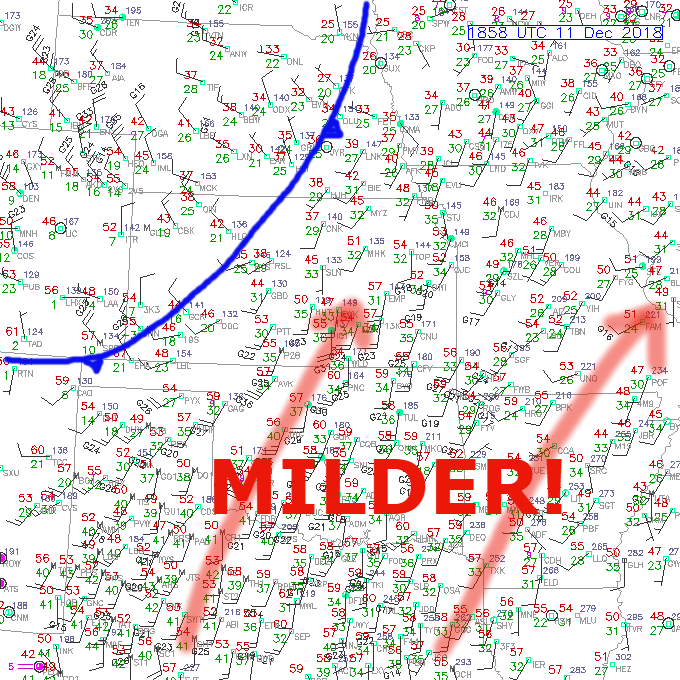 It will be about 5 degrees cooler tomorrow…but still pretty nice…with less wind.

The coldness for Thursday is mostly because of rain and clouds…there really isn’t a lot of cold air to get tugged into the area with the storm passing so far south of KC. When it’s that far south…it’s really not tapping into any Canadian or Arctic air…so yes it will be cooler on Friday too…but that coolness will be moderated on Saturday

So let’s talk about Thursday.

It’s going to rain…it may not rain all day but it will rain. Mostly mist/drizzle and lighter rains…but there may be a few hours here or there with something a bit more substantial. Temperatures won’t really budge much and will waffle around in the 30s all day…overall miserable. Oh and the winds will be blustery and gusting to about 25 MPH…so there will be wind chills to take into account as well.

Notice how this thing really digs into the Rockies and really get’s going towards Texas. It closes off into a pretty unusual upper level storm in eastern TX.

The issue with early Thursday will be the surface temperatures…which may be straddling 32°. It’s not out of the question there could be a few slick areas, probably with an emphasis across northern MO first thing Thursday morning.

Then as temperatures creep above 32° (if they don’t start there to begin with)…whatever is out there will be more liquid. It will be a nuisance all day long.

Rain amounts off the NAM model through noon Thursday… 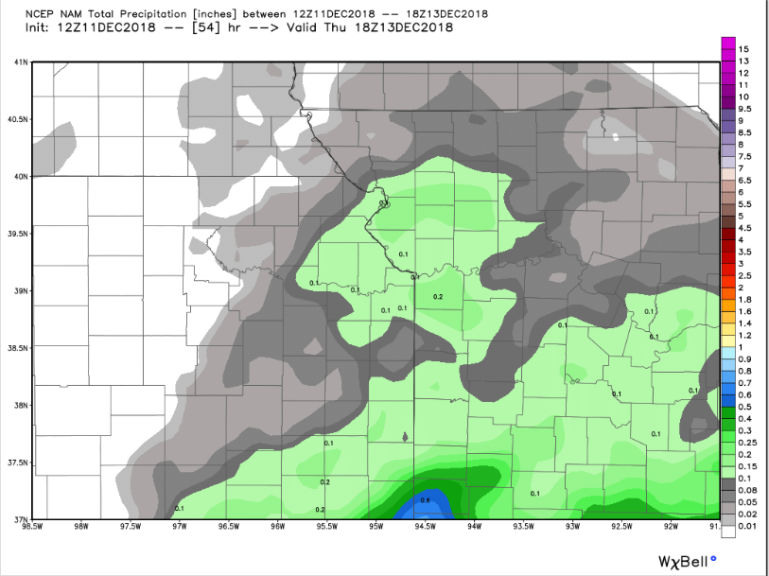 Now look at what happens by later Thursday night… 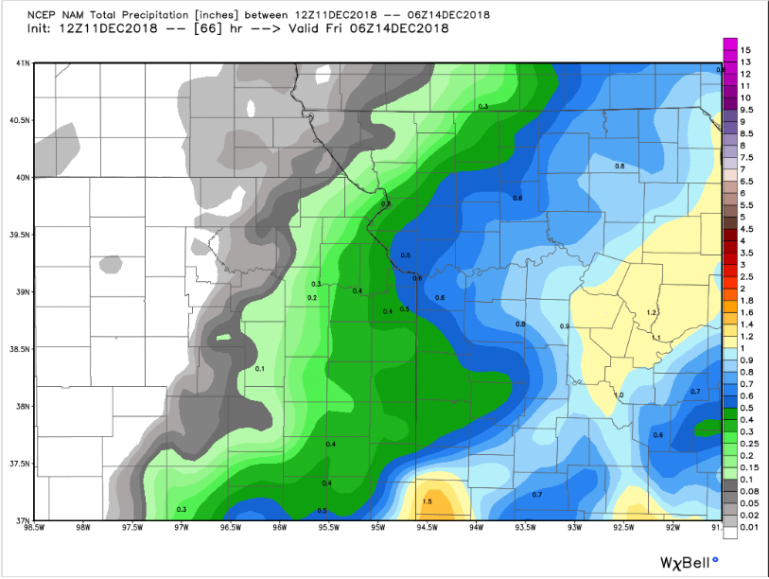 That presents issues for tailgating and the game itself obviously. Here is a look at the hi-res NAM model…starting at 6AM Thursday through 6PM Thursday…

It is not out of the question this could end as a few flakes or ice pellets as the storm pulls away. The air above the surface really won’t be too conductive for snow to form though, especially above 4,000 feet or so…unless it gets a couple of degrees colder up there.

The slow movement of the storm may keep some clouds in the area on Friyda…more clouds and chillier temperatures but I do think Saturday will be better…although there will be little to no wind…so odds are a pretty heavy morning frost (assuming clear skies) and a decent mid>late afternoon in the area.

At this point most of next week looks OK without any major active weather. 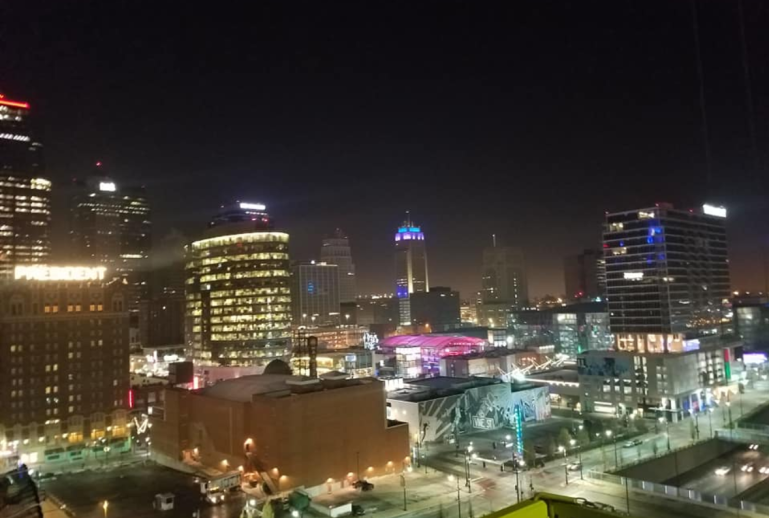 Cindy McCain endorses Biden for president in rebuke of Trump

Cindy McCain endorses Biden for president in rebuke of Trump