Good afternoon…another cold one out there and today we have wind too…so really it’s not the greatest combination. Temperatures, despite the sunshine, haven’t moved much off the morning lows through the noon hour. Actually we’re down a couple at 12PM from the 11AM observation…sort of strange. Regardless today will be a day with highs some 15° below average and more often than not over these next 10-14 days…more of the same is coming.

Tonight: Clear and cold with lows down to near 10°

Tomorrow: Partly cloudy and not as cold with highs well into the 30s…milder farther south of the Metro

Tuesday: Partly cloudy and chilly with highs in the 35-40° range. 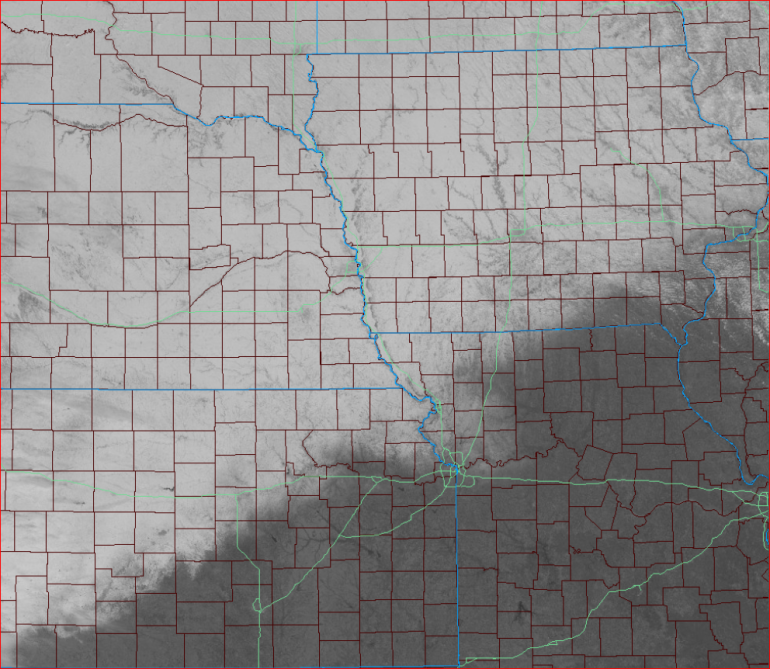 That’s a lot of snow…we had a lot of melting yesterday thanks to the rain…and the milder air that came up the state line.

I did get word that there was a probable elevated wall cloud with this. I didn’t get a chance to frame grab a velocity image at the same time…

As I mentioned that’s one of the better “hook” echoes that I’ve seen in awhile. Thankfully despite the rotation about 1,000 feet off the ground…nothing was able to come down likely because the air was just too cool.

I do remember one incident back in March…I think it was in the late 1990s-early 2000s where we had a tornado towards Sibley I think…and it was around 45° or so…it was during the morning. So strange things can happen.

Farther towards the southern US…there were tornadoes…Columbus, MS was hit.

Looks like a #tornado is hitting Columbus, Mississippi. A tornado debris signature (TDS) showing up on radar. #MSwx pic.twitter.com/uPSjRFfpJL 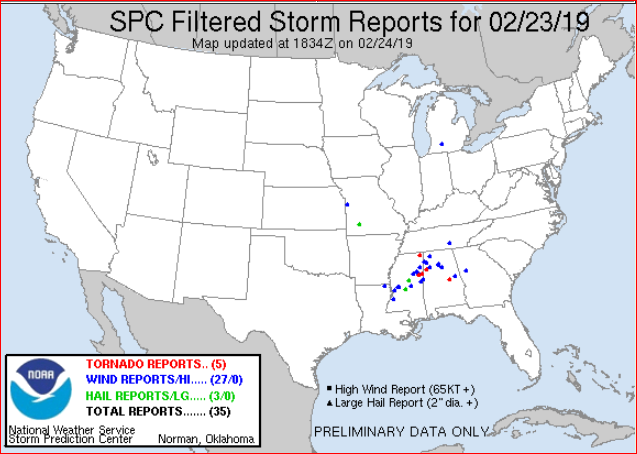 On the other side of the storm…blizzard conditions occurred. Heck, Concordia, KS had about 9″ of very wind blown snow. Hays had 11″ 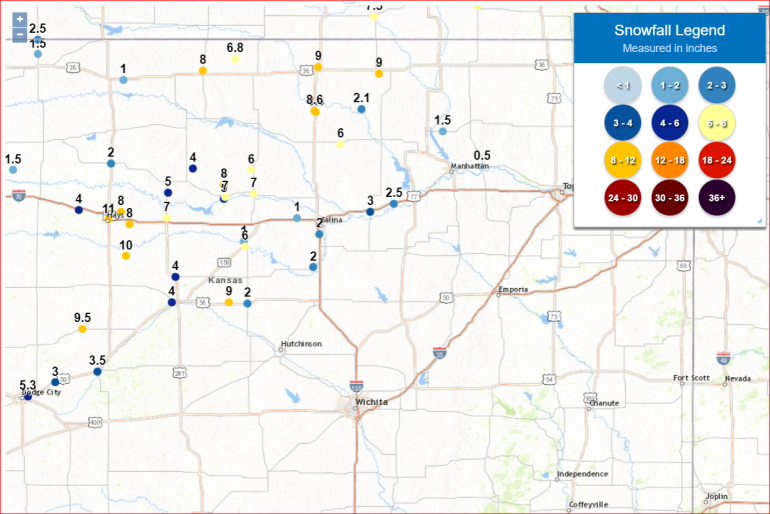 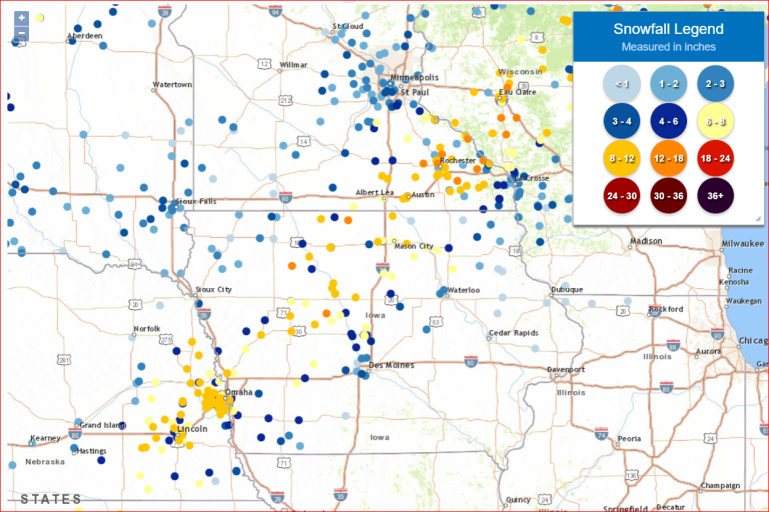 So you get the idea…we just missed this one.

Today that storm is up towards the Great Lakes region. One of the strongest lows that you’ll see over land too for the entire year. Usually these types of low pressures are more confined to the coastal regions or offshore where warmer waters help to create stronger surface low pressure regions…not the case with this behemoth. 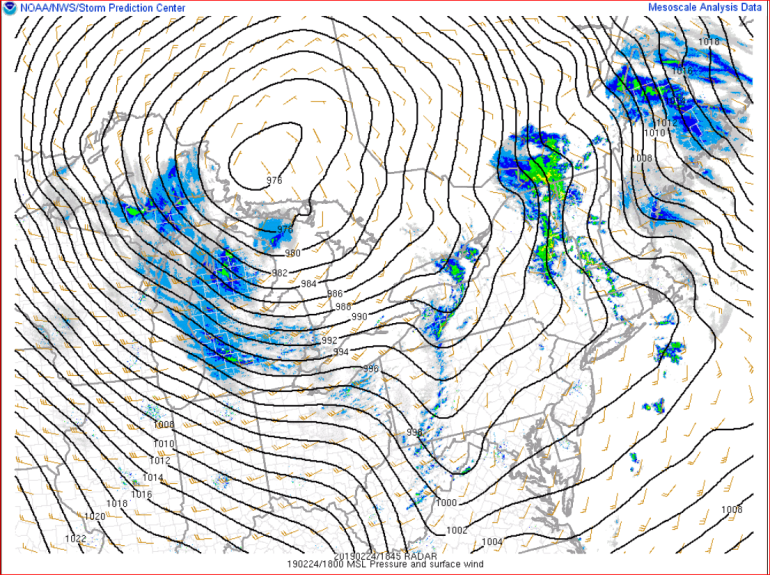 The black lines in the above map represent isobars or lines of equal pressure. Where there are many squeezed into some tight spacing…that means a large change of pressure in a small area…that means wind! 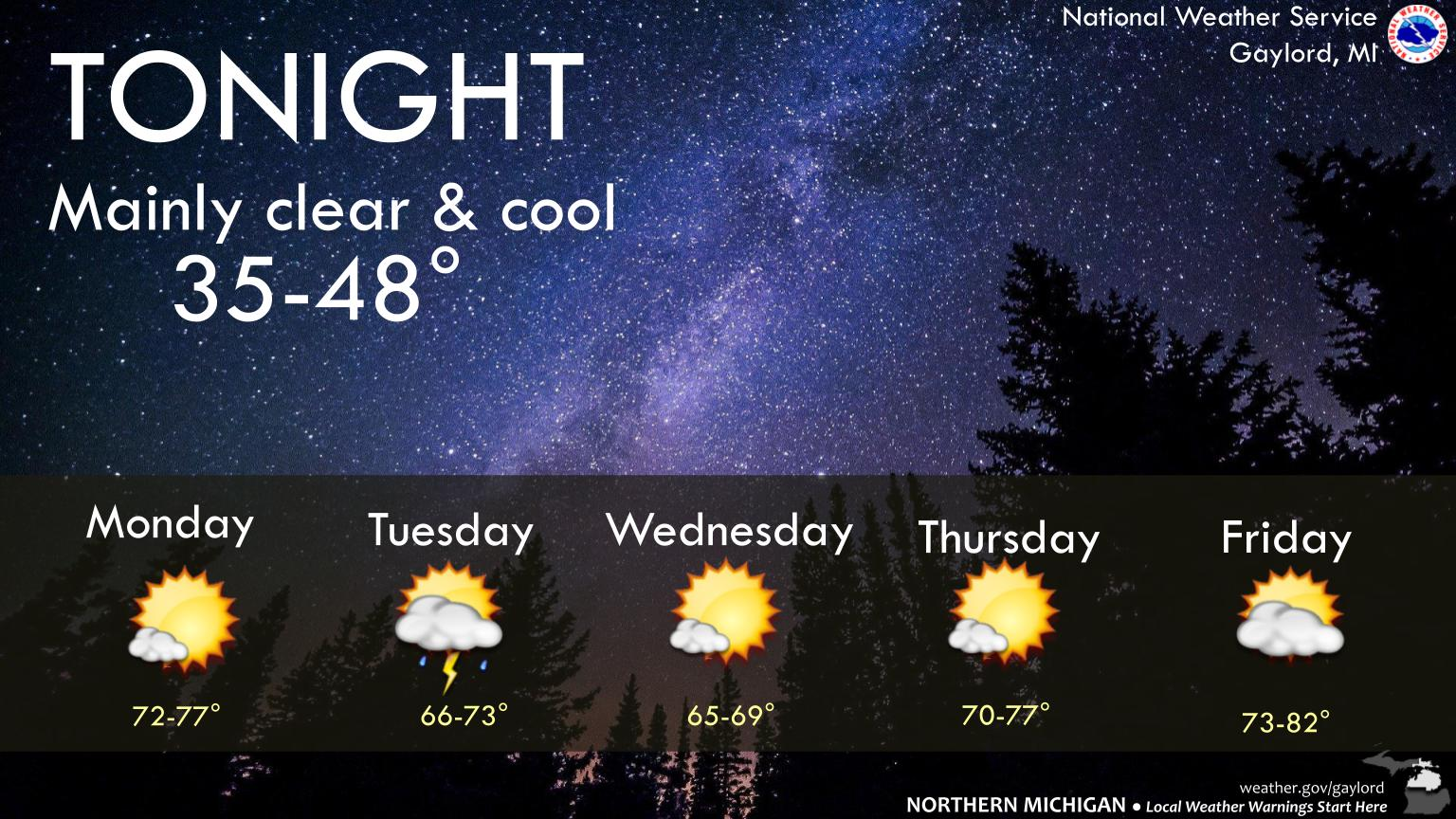 There are still large swaths of the upper Midwest that have blizzard warnings/high wind warnings in effect.

Map above via Pivotal Weather

So let’s put that storm to bed.

Onwards…our weather will actually be a bit calmer for a few days. There are a couple of things to watch as the week moves along. Some very light precip (rain or freezing mist) on Wednesday (iffy right now) and the potential for an accumulating snow nearby on Friday to start the month of March.

As I’ve talked about the beginning of March won’t be so great. Temperatures are really going to struggle through the 1st 10+ days of the month and while Spring doesn’t start till the 20th…we won’t be enjoying any early Spring weather it appears.

As far as Friday goes…snow may be streaking through the Plains region. Not worth getting too detailed about at this point but we can see how the 2 longer range models are handling the differences. The GFS is more bullish with a smallish wave coming through the western Rockies…

Let’s go up to about 18,000 feet and you can see what I’m talking about. Move the slider to the right for the GFS model for 6AM Friday…see what’s happening in the Rockies? Now move it left…and see the “flatter” look of the EURO model?

IF the wave is beefier…and with the cold air in place…we get the potential of seeing another accumulating snow and with s strong surface low tracking towards the south of the region…the potential for having ourselves a wind blown snow too.

The flatter look of the EURO isn’t as ominous for snow…but it does show another dump of cold for March air down into the Plains for next weekend if nothing else. For what it’s worth…the soon to be new GFS model gives us very little snow…and the Canadian model which never met a snowstorm it didn’t like…doesn’t do much for us either on Fridya at least. It does have lots of cold air advection lighter snow in the region on Saturday.

I’m not convinced about anything regarding this at this point. The EURO model flakes out (as in goes haywire) next weekend anyway and I’m never one to trust a lot into the GFS model to begin with…but the models are giving us clues that “something” will occur as we get another potential significant dump of cold nasty air for early March. I get a bit nervous about that set-up because when an anomalous cold or warm air mass comes into play during the seasonal transition time..it makes me wonder if something more noteworthy, regardless of what model is doing whatever the models are doing, can occur. The EURO is pointing again (and it’s been consistent with this) highs of around 15° next Saturday. That would be almost 35° below average. The GFS has a high of 12 and 11° next SAT and SUN.

Let’s go up to 5,000 feet for next Saturday…oh my goodness. These are the anomalies with regards to average. Oh and those anomalies are in °C…so about double those values for °F. 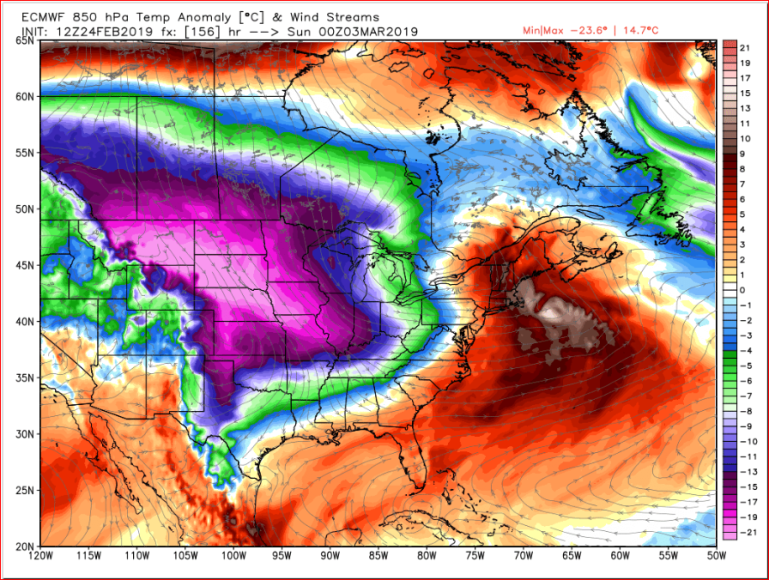 Purple is OK for the summer…nasty for the winter.

The coldest highs ever on 3/2 (Saturday) 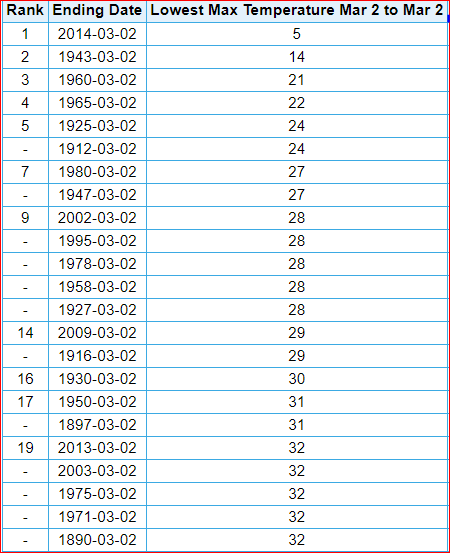 and for giggles the 3rd (Sunday) 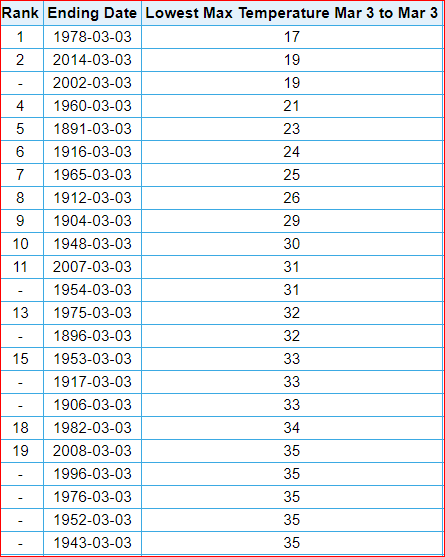 IF there is snow on the ground…watch out at night too.

OK that’s it for today…among everything else happening yesterday there were some great rainbows and double rainbows too. Check this picture out…

Glenn Jones sent this picture in… 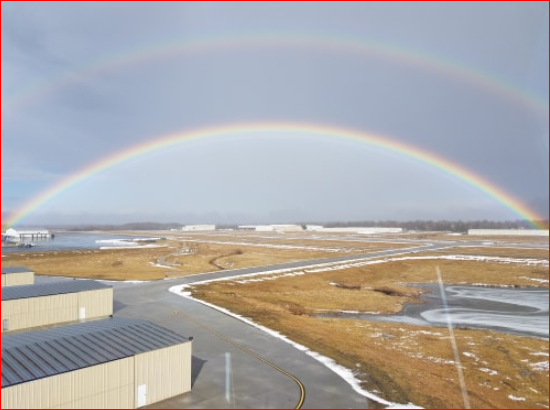