The sun is starting to make more of an appearance this afternoon and the temperatures are a starting to pop up. With the sun becoming a bit more prevalent…the atmosphere is going to start getting more “mixed”…this allows the stronger winds above the surface to start working their way down to the ground…so expect the winds to be on the increase for the rest of the day. Temperature will pop into the 70s I think in the next several hours.

Tonight: Windy and mild with lows near 60°

Friday: Variable clouds and mild. Highs 70-75°. There will be occasional chances of rain/thunderstorms. The better chances should be in the afternoon. Some locally heavy rains are possible with any individual cells coming into the area. The rain should be moving from the SSW to the NNE or from south > north.

Saturday: Some showers possible, especially though the early afternoon. Cooler with highs around 50°

Sunday: Nicer day (better day of the weekend) with highs in the 60s but we may be fighting some clouds for awhile.

I’m on vacation for the next few days but I wanted to get an update out for you. There really haven’t been too many changes to my thinking regarding the upcoming weather. Rain chances are back in the picture and I’m hopefule by the end of the month we can pick up a needed 1-3″ of rain in the region.

A very good opportunity comes tomorrow to start getting some rain. There is a rather strong area of low pressure that will be getting it’s act together over the next 12-24 hours in the SW Plains.

This area of low pressure will consolidate towards western KS Friday then move eastwards and weaken a bit as it moves closer to KC early Saturday morning. As the surface low moves eastwards areas of thunderstorms and showers will be developing around the circulation.

Our model data is showing this…here is a look at the higher resolution NAM model…showing the evolution of the rain and at times some thunderstorms.

You can see the forecast areas of thunderstorms in eastern KS and parts of western MO. They will need to be watched a bit more carefully because I can’t rule out the potential of some hail with the cells. As far as anything worse than that (a small spin-up)…that risk is there as well. While this won’t be like what happened in early March…sometimes these low pressure circulations have the ability (with focused heating and enough instability) to create small tornadoes. It’s worth mentioning and paying attention too. The data today wasn’t quite there but that doesn’t mean it can’t happen with a few tweaks. Perhaps the better chances reside towards the west of the KC area and up towards NE KS…but again it’s worth monitoring. The timing would be from 4PM-8PM or so. The weather team will monitor that potential for you Friday

On Saturday the area of low pressure will be towards NE MO. I’m thinking there should be some wrap around moisture for the area bringing the potential of some additional areas of rain. In terms of totals the data is pretty convincing showing wide variation. Convection obviously later tomorrow into Friday evening means not all get the better rains…and the wrap around moisture on Saturday will probably bring some rain but not widespread significant amounts. So in the end this system should produce 1/10-1/2″ of rainfall for most areas with some areas getting 1/2″-1″ of moisture. The convection on Friday will play a large role in the heavier amounts. I’d post a map but I have little confidence in the specific outcomes of the model data.

Sunday should be quiet.

Another system will come towards the area on Monday with another potential 1/10-1/2″ rain in the area. Then another system is slated for the end of the week. So there will be decent opportunities for us to get at least 1″ of rain in the region with nice upside potential by the end of next weekend.

We certainly need it. I was looking at the latest drought figures today…no real changes to highlight since the last report…but I noticed in comparing where we are NOW to where we were back in 2012 at this juncture…things are worse this year. As I mentioned yesterday we were actually in pretty good shape heading into the spring months in 2012 when the rains just turned off. You can see the history for the MO side in the following graphic. Our current situation is towards the far right…with 2012 on the far left.

So the rain is needed for sure…

The feature photo comes fro Katherine Kat Brock of a pretty sunrise taken by her dad, Wayne, in Buckner, MO 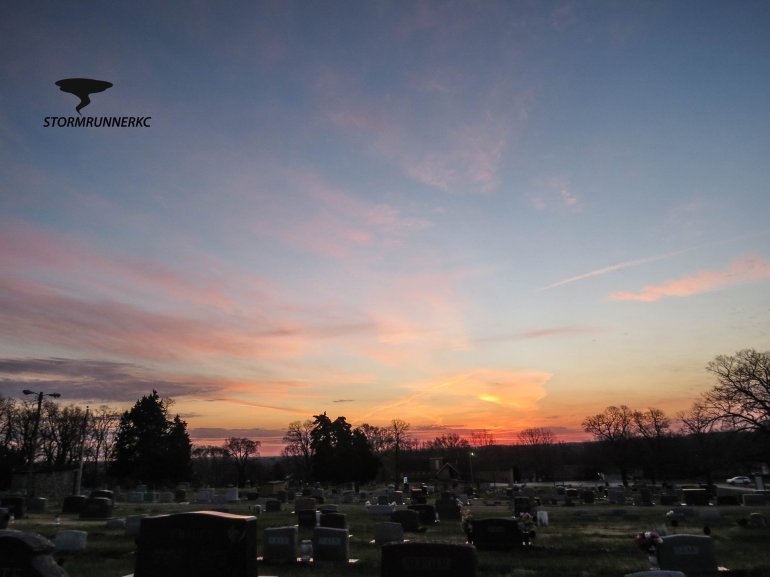