I’m taking the day off but wanted to get something out because we’re entering weird weather world over the next few days in my opinion. Everything from tomorrow through Friday is sort of strange I think. The whole way this thing comes together, or tries to come together is a rarity in my opinion. A storm coming down from the NW…then slowing down to a crawl…the consolidating as colder air comes into the system on Friday…all is just sort of strange to me…the whole evolution…which leads to a lower confidence forecast for the next 3 days.

It will snow…and we should get accumulations tomorrow. How long it snows and whether or not we get a wintry mix and/or see some melting in the afternoon remains to be seen.

Today alone is weird…arctic air is holding on…moisture is entering that arctic air this morning reinforcing cloud cover (not expected) and allowing persistent snowflakes to be squeezed out…it’s been snowing at my house for the past couple of hours. Somehow temperatures are supposed to get into the 30s today on the model data…we’ll see. It’s 14° at KCI at 9AM after a low of 4°.

Wednesday: Snow develops near daybreak…perhaps earlier on the KS side and slowly spreads eastbound during rush hour. Snow should accumulate 1-3″ worth in the morning…probably 1″ or so by the end of rush hour. This will lead to slick roads and messy conditions. There may be a snow/rain mixture at some point in this whole thing…we’ll see about that. IF not…accumulations may be in the 2-3″ range.

Thursday: Potentially a lull…with a mix of rain/wintry mix possible. Highs in the mid 30s (some melting of what falls Wednesday is likely)

Friday: Colder air comes back into the area…back to snow…accumulations are possible if we have enough moisture around.

This is a mess…plain and simple. Once again we’re going to be fighting over a thin layer of near 33° air above the surface…and whether or not it’s 33° or 31° and that 1-3° potential difference is what the models are trying to figure out. Hence the all snow…mostly snow…or combo solutions of rain/snow that the data is spitting out.

The problem is any solution can be correct. I don’t see a reason why it can’t be all snow…nor can I see a reason why it can’t be some sort of wintry mix. The NAM model and the EURO have been the most consistent if a mostly to all snow event tomorrow. The GFS model has shown a transition occurring because of 33° air above the surface melting the snowflakes as they fall.

Conceptually there will be strong south winds above the surface starting tonight…tugging above freezing air aloft closer and closer to KC…perhaps even through the region by daybreak. So that would lean one to think more of a snow>rain scenario. The issue is that conceptually there is a lot of dry air above us…that will take time to saturate. This saturation results in the atmosphere cooling down above us…perhaps JUST enough to tug a 33° forecast of air aloft…to 31°…and viola we get more snow from that scenario.

This is what the NAM does. Surface temperatures will be approaching and perhaps eclipsing 32°. So IF snow is falling lightly…it may not accumulate that well (or at all). IF it comes down heavier it will accumulate. This plays into how much snow we actually get…just another big wrinkle to work on today.

Before the winter started I had a strong feeling our storms this winter were mostly going to be much more challenging that what we’ve seen over the past year…and that thought process is playing out. My kingdom for a traditional winter storm forecast at this point.

Then there is a whole 3 day evolution of how this plays out…and that too is a weird deal comparatively speaking.

Let’s start with tomorrow morning…SW flow aloft will allow a series of disturbances to come up from the SW US…these disturbances will initially run into dry air aloft…and that air will saturate slowly overnight. The main wave that should produce the snow initially is actually in southern AZ this morning…it will move into southern KS tomorrow at daybreak. 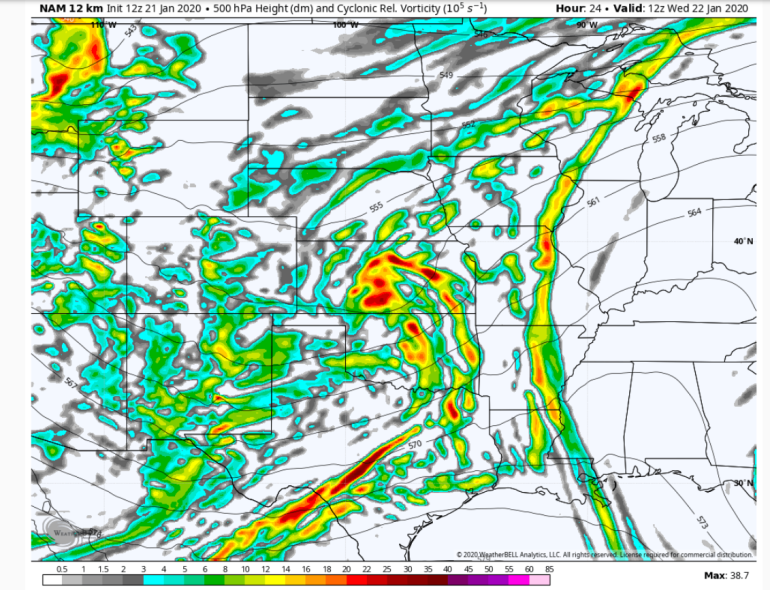 Pretty decent wave…with some other energy behind it too in NM.

That is the issue tomorrow.

See the swirl…that will move into the Plains on Thursday after moving through the western Dakotas Wednesday night. Here it is on Thursday morning…as we look at the situation at about 18,000 feet…and look for “dips” in the jet stream…meaning rising air on the front side of those dips. 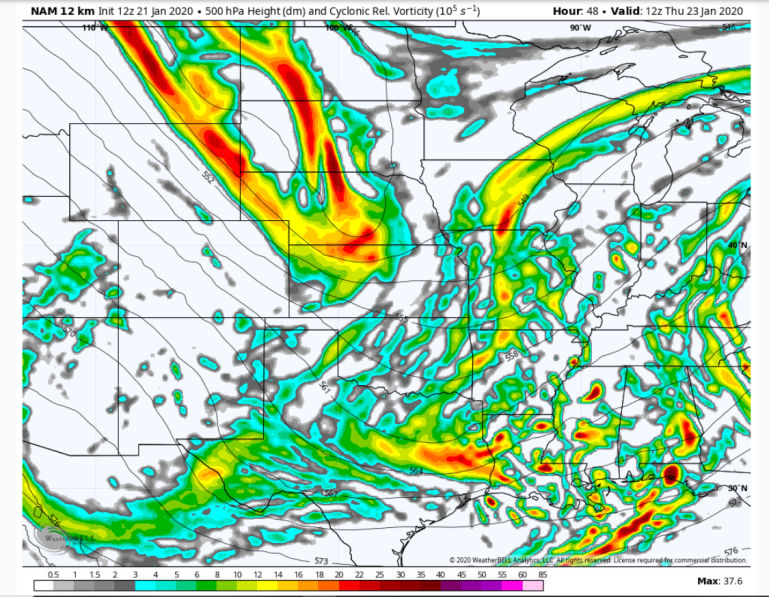 That dip into southern NE will gradually come SEwards Thursday…so that by Thursday evening we have something like this…a closed off system near KC. 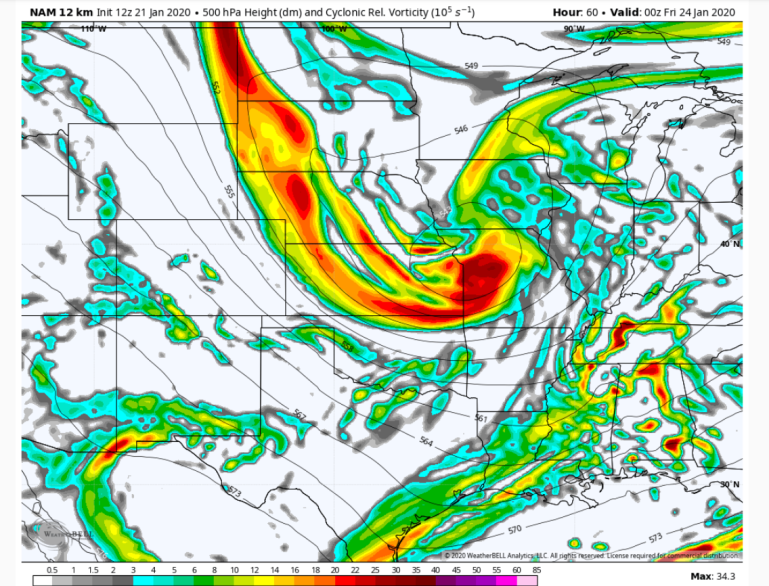 As this occurs colder air should work back into the area later Thursday…so whatever mix we have going on should convert over to snow.

From there Friday is the key. IF the storm keeps moving along towards the east…we get very little snow on Friday. Some data strongly suggests that will be the case. IF so we may end up overall from WED to THU with 2-4″ total with melting cutting that amount at various times.

IF the system slows on Friday in MO…and we try to get wrap around moisture into the colder air cutting into the region from the northwest…we could see another 1-2″ or so. Most data has this threat farther off towards the east of KC…which is very possible.

Again just, in my opinion a weird evolution of 3 days of wintry weather and one that will require lots of forecast updates I think.

The fact that today is not working according to my plans is not a confidence builder for what’s coming.

My feature photo comes from Terri Bruntmyer‎ out towards Woods Heights, MO in Ray County 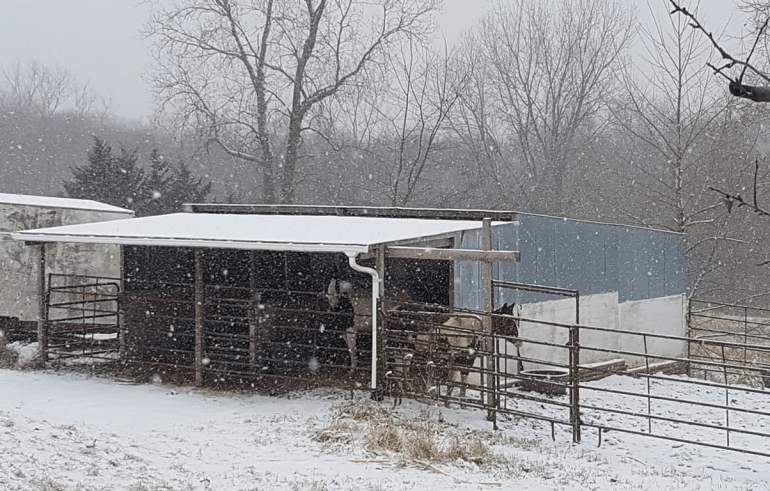