There’s been nothing easy about forecasting snow around these parts this winter. I had a bad feeling about the forecasting part of what was coming back in November…and it’s sort of playing out that way. No clear defined storms like last winter to get a good grasp on. Instead we’re mostly dealing with weak and disorganized storms locally at least…with us never really getting into the core of storms. Occasionally we’ll get an overachiever but it just seems this winter has been tough to figure.

This morning we’ve seen one fast moving weak wave come up from the SW…odds are when you read this it will be long gone…but it did produce a few tenths of an inch of snow/sleet on the southside of the Metro earlier this morning. Radar is below.

Then there is the issue of tomorrow and the snow chances. We’re sort of on the NW side of what will turn into a decent snow maker for areas towards the Lakes and southern MO. Snow + a parade + 100s of thousands of folks outside…then trying to leave Downtown KC at about the same time…that could be/will be a mess.

Today: Cloudy skies with lighter precip falling during the day. A mix or snow is possible but the owrst may well be done by 10AM in terms of accumulating snow. Dusting to 1″ is likely for areas from near I-35 eastbound. Steady temperatures.

Tonight: Cloudy skies and colder with lows in the low>mid 20s. We may not have much falling though. A few patches of snow are possible.

Tomorrow (Parade Day): Snow redevelops and it may snow more moderately than lightly in some areas especially from KC southwards. 1-4″ is possible tomorrow…and this could really be a mess for the parade/celebration on many levels. Temperatures will be in the mid>upper 20s.

Thursday: Snow ends in the early AM…the variable clouds and cold with highs near 32°

It’s a mess for sure…

This early Tuesday morning is one wave moving along and south of I-35. There isn’t much happening across areas N and W of I-35 as of 8AM or so.

That wave though was decent enough to generate a quick 1/2″ of snow in spots…perhaps a bit more farther SE of KC.

That is the opening salvo to the next couple of days.

The weather map this morning shows colder air oozing southwards…the temperatures in the next map are in RED…note the teens to 20° readings across the I-80 corridor.

The winds are also starting to increase a bit more…so it feels colder with the wind chill factor.

So this is really just the beginning…not a lot appears to be coming after this 1st fast moving wave today.

Then there is the situation tomorrow…and some data this morning is a bit more bullish for the snow potential and amounts tomorrow. Perhaps sneaking to the 2-4″ range from KC southeastwards. Obviously this is a big issue for the parade tomorrow later in the morning and the celebration in the afternoon.

The system that will be sending fast moving disturbances our way is down towards the SW of the region.

That dip in the jet stream will send out ripples from the SW to the NE.

Those ripples will generate periods of snow…tomorrow especially and IF one or two areas of snow develop better…in SW to NE bands…we may get a bit more snow that previously thought.

When we go up to about 18,000 feet and track the various disturbances up there…we get this look tomorrow morning. The solid black lines are the main dip in the jet stream or what we refer to as a trough. The skinnier lines are little waves that will be generating areas of light snow…perhaps moderate at times. Those little waves are moving from the SW to the NE rather quickly and should generate snow as they come up towards the NE into the colder air. 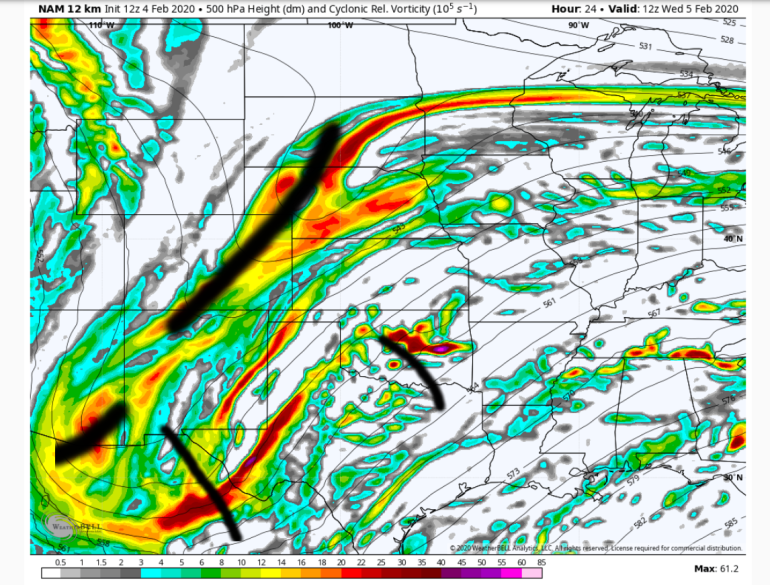 So with this idea…the model generates this much moisture…close to 1/10″ or so from near I-35 SEwards.. That would be close to 1″ or so of snow by evening rush tomorrow. 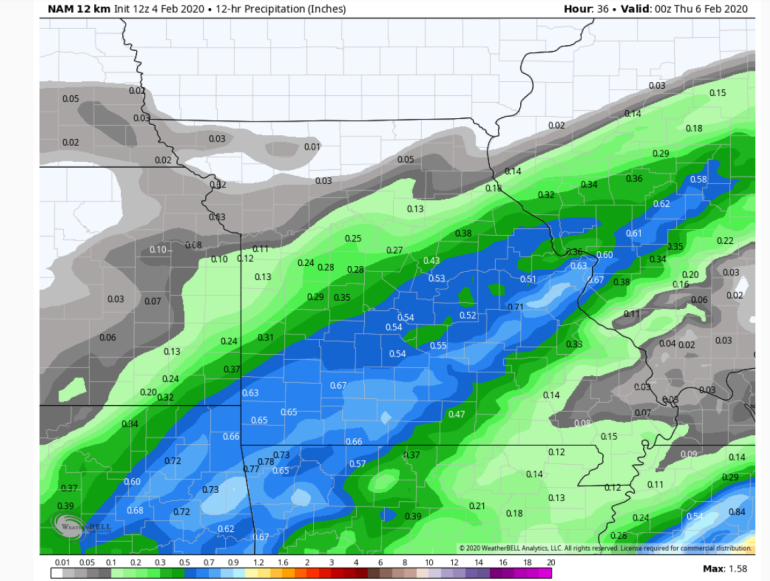 Then tomorrow night into early Thursday morning a somewhat stronger wave comes up from the SW. 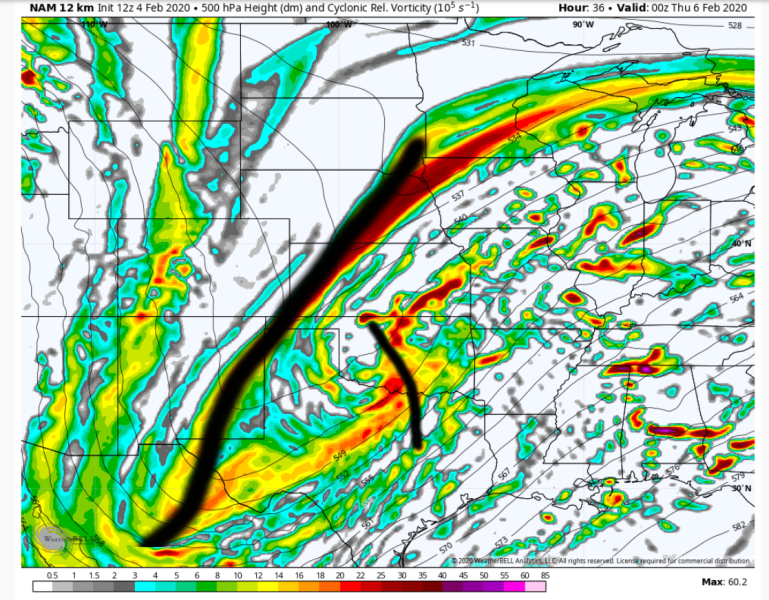 That will generate more precip…and now we’re creeping up to about to about 2/10″ of liquid…so that could be 1-3″ of snow. 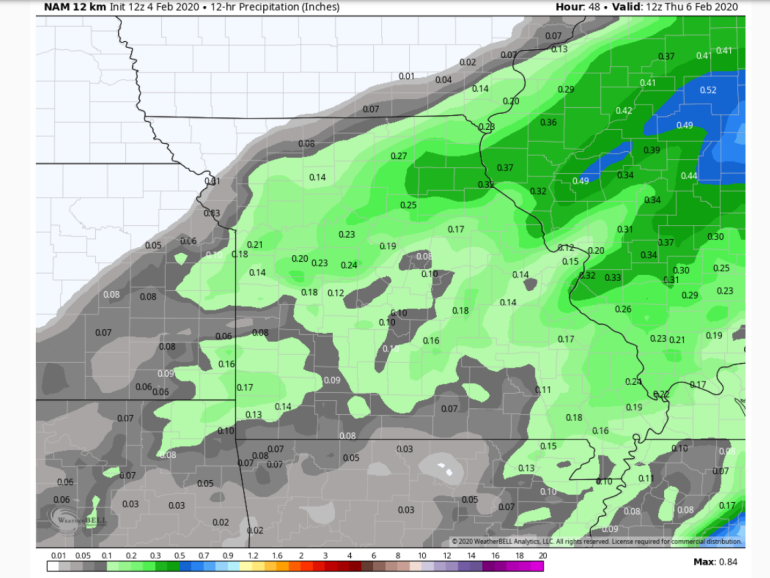 Also note how I-35 seems to be a somewhat dividing line between overall 1-2″ and perhaps 2-4″ totals tomorrow into tomorrow night.

Schools may be closed again on Thursday at least for some areas especially from the Metro into the MO side. 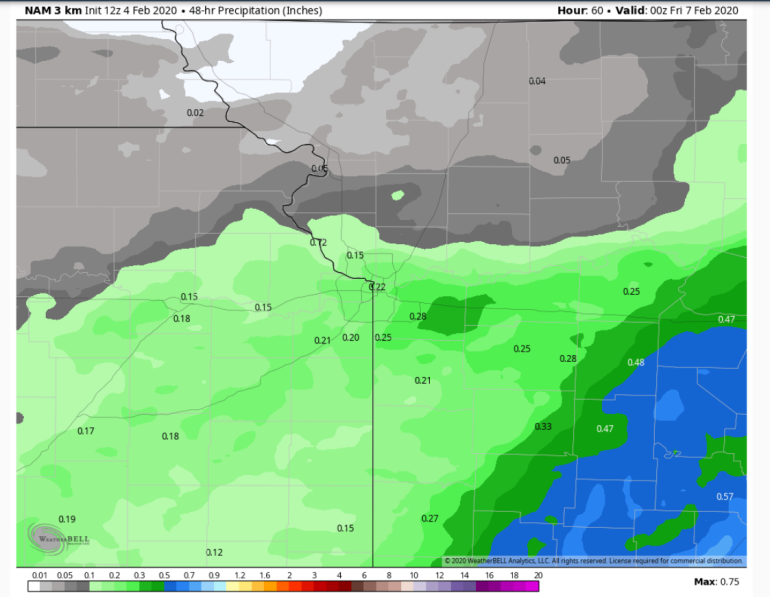 Notice the darker green area in Jackson Co…that’s the model trying to sniff out a few higher totals possible…and in reality that darker green-higher total area may shift anywhere in the Metro. So that’s why some higher totals are on the table.

This will be a pretty big ticket storm through the Southern Plains as well.

The lingering snow will affect temperatures into the weekend. Also of note is the potential of some sort of snow system on Friday as well.

So a lot going on for the next few days.

I just hate the timing of the snow potential with the parade. No matter how well the city is prepared and you are prepared for the cold…all those people leaving the city after the celebration at the same time is a recipe for some long periods of time in the car…at least you’ll be more comfortable than being outside. 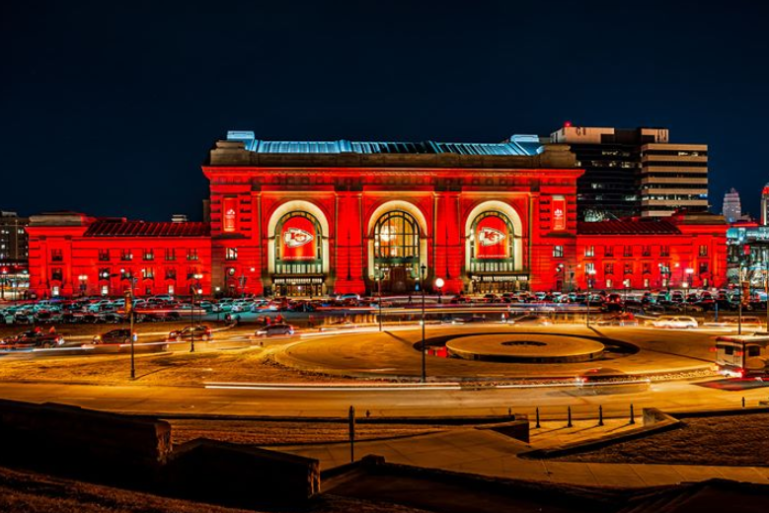