We’re halfway through the month of May and temperatures are running about 5° below average so far…we’re going to start whittling away at that number over the next few days as temperatures are going to really warm-up…so much so that you’re going to be thinking more like summer than spring. It’s not going to be like last May though…we we switched to a summer regime for days on end…temperatures on Sunday will be cooler and more comfortable.

Today: Variable clouds and warm with highs in the 80s

Tonight: Partly cloudy and warmer with lows well in the 60s…breezy too.

Friday: More clouds, windy and warm with highs well into the 80s

The issue is with the rain/storm chances…and how strong the storms will be when either they arrive in KC or develop nearby. For those that don’t care for the big boomers (most of you I’m guessing) you would want these storms to develop well away from the area…at some point they’ll get to us during the overnight…typically they are considerably less strong…and that is still what the data mostly shows…the risk of storms Saturday evening and overnight into Sunday early AM. More on that in the discussion.

Also we need to talk about the the storms from yesterday, we viewed them from afar here in the Metro…but they were structurally beautiful and a lot of folks were commenting on the clouds. 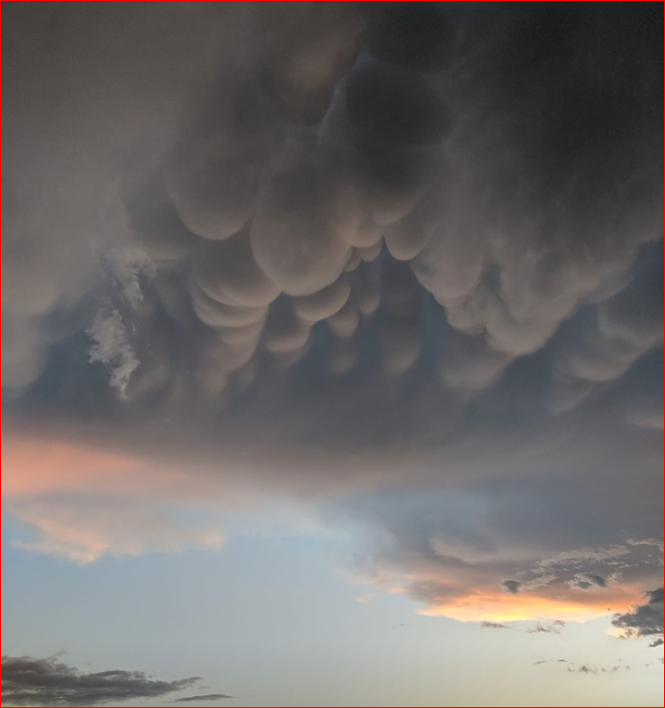 So about these clouds…they were prevalent in the skies when looking northwards…or for those of you who lived north of KC. They are created when the air inside a thunderstorm being lifted to the top of the storm…sort of runs out of oompf and starts to fall again

The “pouchy” or bulbous looking clouds are called “mammatus” clouds. They are pretty common when thunderstorms form and can be striking to look at. Here is a more detailed explanation…

Sometimes very ominous in appearance, mammatus clouds are harmless and do not mean that a tornado is about to form; a commonly held misconception. In fact, mammatus are usually seen after the worst of a thunderstorm has passed.

As updrafts carry precipitation enriched air to the cloud top, upward momentum is lost and the air begins to spread out horizontally, becoming a part of the anvil cloud. Because of its high concentration of precipitation particles (ice crystals and water droplets), the saturated air is heavier than the surrounding air and sinks back towards the earth.

The temperature of the subsiding air increases as it descends. However, since heat energy is required to melt and evaporate the precipitation particles contained within the sinking air, the warming produced by the sinking motion is quickly used up in the evaporation of precipitation particles. If more energy is required for evaporation than is generated by the subsidence, the sinking air will be cooler than its surroundings and will continue to sink downward. The subsiding air eventually appears below the cloud base as rounded pouch-like structures called mammatus clouds.

(via the University of Illinois)

So now you know. The storms are north though were structurally strong.

There was some pretty nasty hail in a few of them…larger than golf ball sized up towards Maysville and towards Dawn, MO in Livingston Co. They fell apart as they approached the KC Metro area later in the evening with the setting sun…it’s always amazing to me when the storms fall apart like that in a matter of minutes.

The focus for today though is on the weekend and the storm risk on Saturday…right now parts of Saturday do look wet…although the timing of the rains are still in question right now.

To a large extent this is a highly unusual storm…in terms of what it’s going to do in CA especially…rain…snow…almost like a winter type event there.

Heck there could be 1-2 feet of snow in the mountains out there! 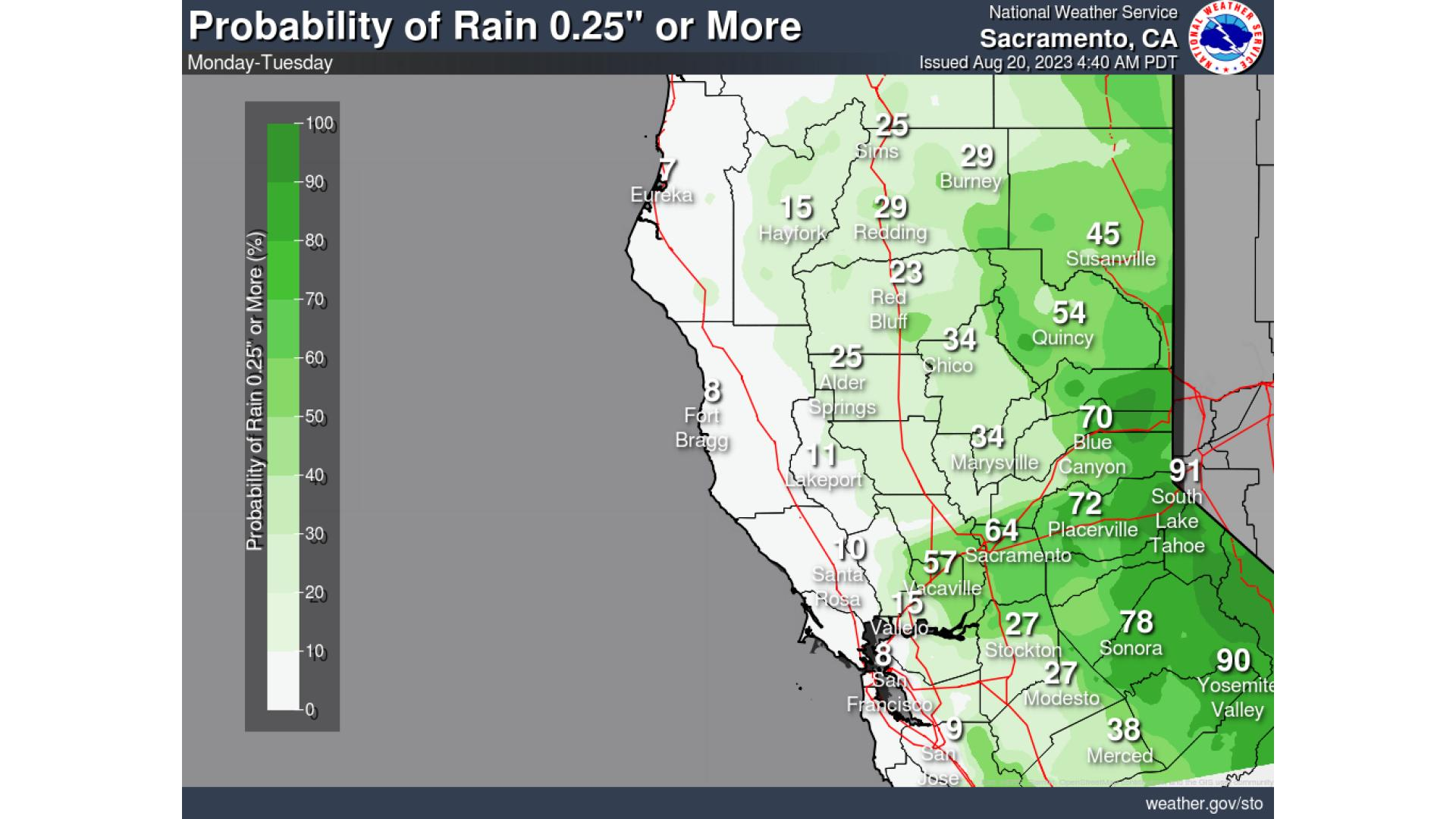 and farther south…rain in southern CA 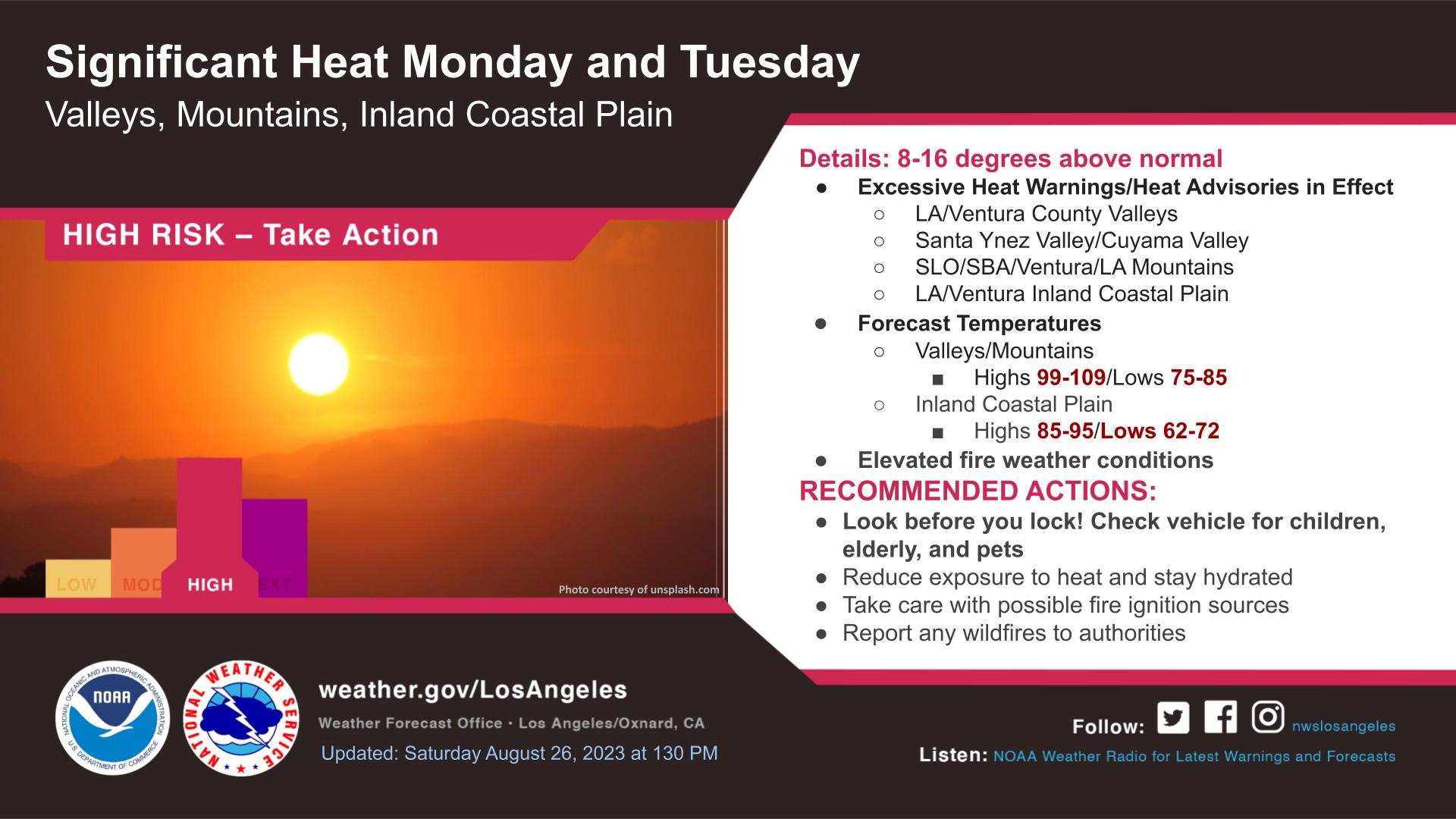 So when something really unusual happens out there…odds are something bigger could happen here too…especially in May for goodness sakes.

So that’s what we wonder about heading towards the weekend…what happens to that storm as it comes ashore and goes through various structural changes as it crosses over the Rockies and comes into the Plains.

What happens out west (storms)…and how do those storms hold together (or not) as they race towards the NNE. Do we get into the clouds and rain on Saturday from some future disturbance that is created from these future storms…does that happen farther west and we stay more on the dry side Saturday…perhaps getting more unstable so that the next future wave of storms that may form closer to eastern KS don’t have time to weaken as much before they come into KC in the evening. Then IF that happens are those storms more likely to have stronger winds and some hail with them.

I realize that is a Lot OF questions but they are all on the table.

The SPC is watching the Plains for sever weather which is likely later Friday into Friday night…this has been highlighted for days and I’ve shown these thoughts on the air this week…all west of KC on Friday. 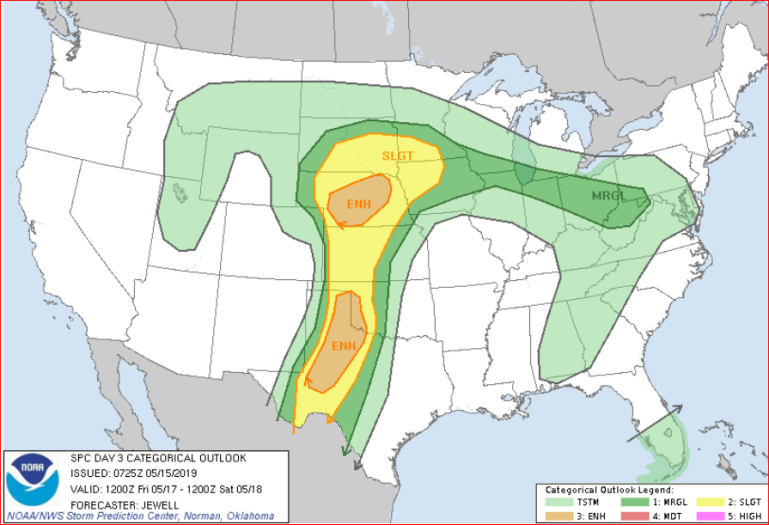 2015 had 168 tornadoes in the Plains states from May 16-31, which was the most since 2008! That doesn't mean they were all photogenic and/or in good chase terrain. The vast majority were across Oklahoma and Texas, but not so much across the panhandles… pic.twitter.com/0r1zA1yFBn

The somewhat “slow” start to the severe weather season in the Plains and the fact that we’re heading towards the weekend has chasers really stirred up…but there are some throwing out cautionary pieces of information which I think is worth considering considering some of the hyperbole that others have used to describe this set-up. Especially when related to our region.

I have high confidence in rain on Saturday (at some point) but beyond that…the risks of severe weather locally are still rather muddled in my opinion. Areas farther west though…from Topeka/Emporia westwards seem to have the higher risk…and those storms would be moving towards the NNE while gradually moving eastwards as a whole.

Of note though…when I look at the winds at about 10,000 feet that evening… 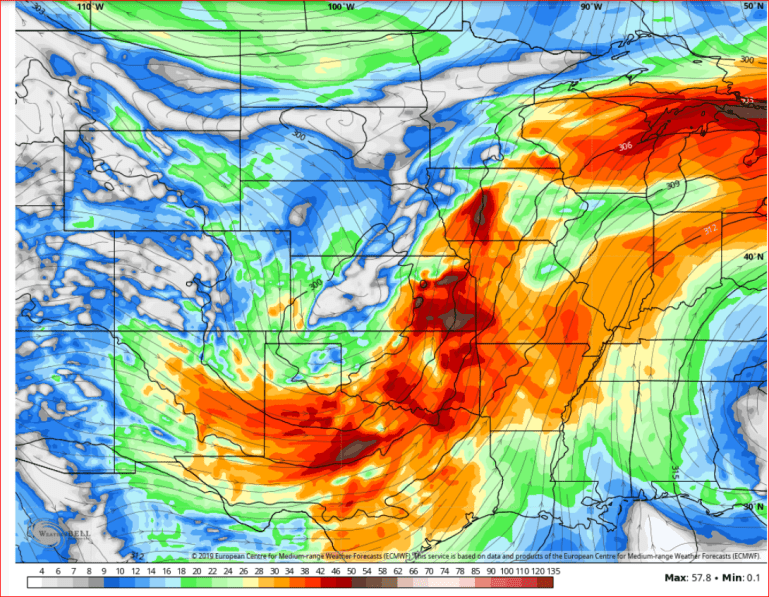 After that the main storm in the atmosphere will shift towards IA on Sunday and while we may have showers around during the 1st part of the day Sunday…the severe weather risk will be over for KC.

So really it’s later Saturday that will need to be watched at this point.

Our feature photo is from ‎Tracy Williams‎  up towards Smithville, MO 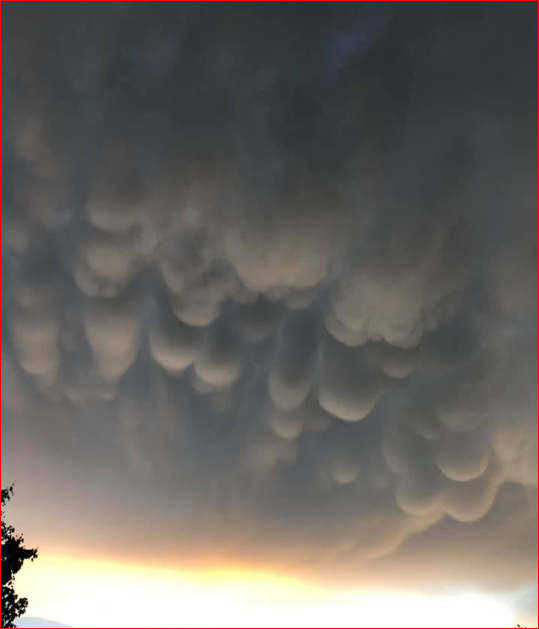