Happy Friday…a cold start this morning with temperatures in the teens for lows in some areas and around 20° for others…odds favor even colder weather next Tuesday morning especially as a strong push of arctic air comes barreling down through the Plains and through the eastern US over the next 5 days or so. This means cold weather for us and heavy lake effect snows towards the Great Lakes region.

On a side note…we’re drying out…and now this is sort of becoming a “thing” of a talking/blogging point. No significant storms are expected for at least the next 10 days, if not close to 2 weeks…and perhaps longer. So the moisture situation isn’t going to improve too much for the foreseeable future which I guess is a good thing and a bad thing.

Today: Mostly sunny and chilly with highs closer to 45°

Tonight: Quick drop off then steadier temperatures…perhaps even rising temperatures towards daybreak with lows near 30° then steady to rising.

Tomorrow: Fabulous…assuming there are no clouds and enough wind…highs should be close to 65° and there is some support for even warmer temperatures

Sunday: A bit trickier because a front will be coming through but the cold air will be lagging behind the front by a couple of hundred miles. We start mild…near 40° but with a north wind developing we’ll see how much we can warm-up…high near 55° with some warmer farther south. Should be partly cloudy and dry.

The low this morning at KC was 17…that was coldest we've been since March 6th when the low bottomed out at 7 degrees. That is a span of 247 days…the average span between the last 20 degree in the Spring and the first in the Fall is 259 days. A little early.

Don’t think I necessarily want to get into the specifics about the ups and downs…this has been written about all week long and talked about…so nothing over the next 5 days should be a surprise…up tomorrow…a drop on Sunday and a plunge on Monday.

The only issue about Sunday night into Monday is the potential of perhaps some sprinkles/light showers over to a few flakes. Whatever it is doesn’t look significant and what falls should dry up before temperatures drop to below freezing on the roads so I’m not expecting issues for the morning commute.

Sunday’s forecast is somewhat tricky strictly from a temperature standpoint since the winds will switch from a westerly/southwesterly downslope component more towards the northerly direction but with the true arctic air lagging behind the wind shift…we may warm up a bit before we turn cooler later in the day. Hopefully mid 50s. Then we tank.

Temperatures on Monday should be 30-35° for the most part during the day…that’s cold for this time of the year when the average high is in the mid 50s.

Onto the dryness…again start of getting to be a thing.

The last time we had decent moisture from a system was back on October 2nd…more than a month ago. That was when we were hot and humid (for early October) and we sort of flipped things to a colder regime. Since that overall coldness started we’re having a tough time getting anything really significant to fall. Aside from the 5th…it’s been pretty dry. 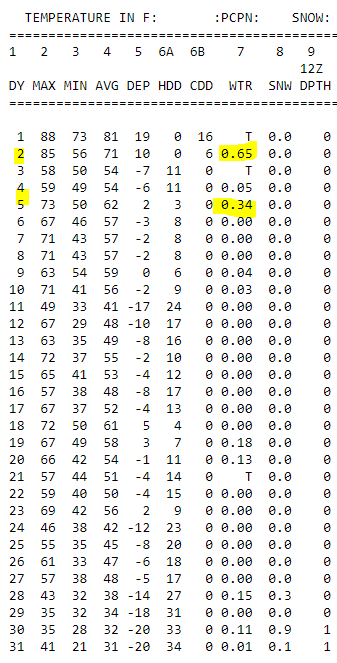 Looking at the model data though…there isn’t a lot coming. I don’t have much faith that much will fall early Monday…and next week looks dry.

Here is the EURO data for the next 10 days… 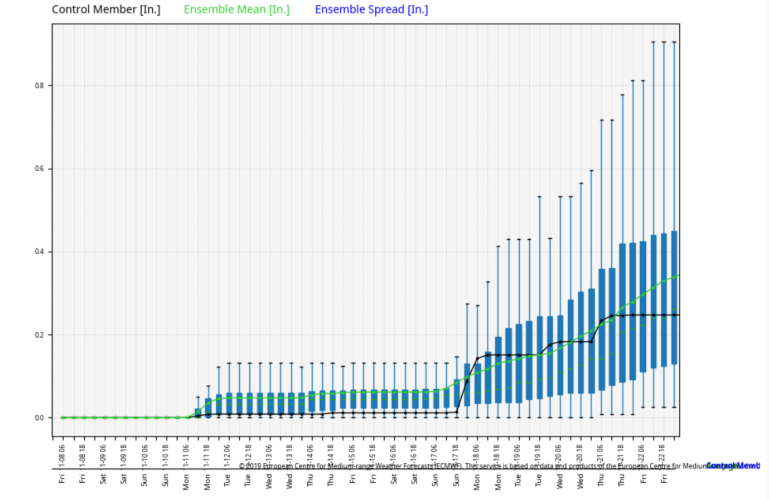 That’s about 1/3rd of 1″…with a possible system towards the 18th…a long ways away.

The GFS is even drier through the 23rd with a possible system after that…(good luck with that). 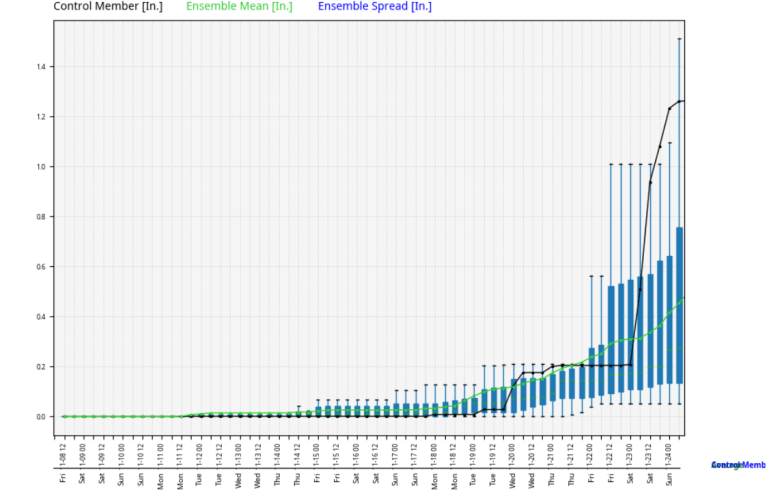 So without any storms and with these rapid fire temperature switcherooes that keep happening it’s tough to get anything to organize and develop through the Plains.

OK that will do it…odds are no blogs this weekend since I’m not expecting any changes of significance to the forecast. IF the Monday morning thing changes though to more of a snowy scenario for us…which I doubt…then there will be a Sunday update.

Finally we’ve just released my latest podcast concerning an organization here in KC called Climate Action KC. They are a growing group of city representatives…politicians…business leaders and others who are looking at how the changing weather and climate affects KC and may affect KC down the road. From there they are then trying to work on mitigation plans that can be implemented now and in the future to make our city better.

Our feature photo comes from ‎Crystal Harper‎  out in Overland Park. 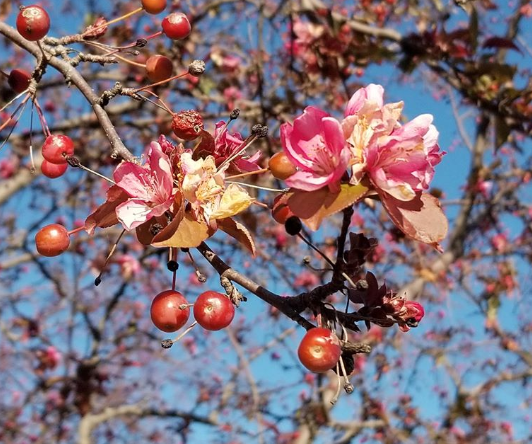