Another pretty blah day is likely for the area although the temperatures will be a bit warmer today compared to yesterday. Of note is that again today (for most of the daylight hours) there may not be a lot happening weather-wise. The cold front is due in tonight and that will start to change the weather a bit. MUCH cooler air comes in overnight into Thursday…and while the forecast is a lot drier…I have suspicions that it may not be perfectly dry over the next 4 days (I see you Saturday).

Today: Cloudy skies with some patches of mist/drizzle every so often. Highs today are sort of complex but let’s shoot for near 70-75°. There could be some warmer temperatures out there IF there are thinner spots in the clouds. Rain chances don’t look overly high today. Windy out there this morning too…gusts are near 30 MPH

Tonight: A cold front will be coming through later tonight. Storms are likely…perhaps some strong ones…need to watch for more locally heavy rain as well. There is a risk of severe weather towards the NW of KC especially. Lows will drop into the lower 40s towards daybreak it appears.

Thursday: Cloudy skies with highs only in the 50s(!). Chilly winds blowing as well. Not pleasant

Friday: Better but a cool morning with lows in the 40s and highs in the 60s.

There are nice indications that again things will start to mostly dry out after tonight…I say mostly because there are a few issues on Saturday that I’m wondering about…and will need to be watched. Overall though…after tonight…things look pretty OK for the next 6+ days or so.

So let’s start thing off with that…anomalies over the last 6 months…this doesn’t include yesterday’s rain either. 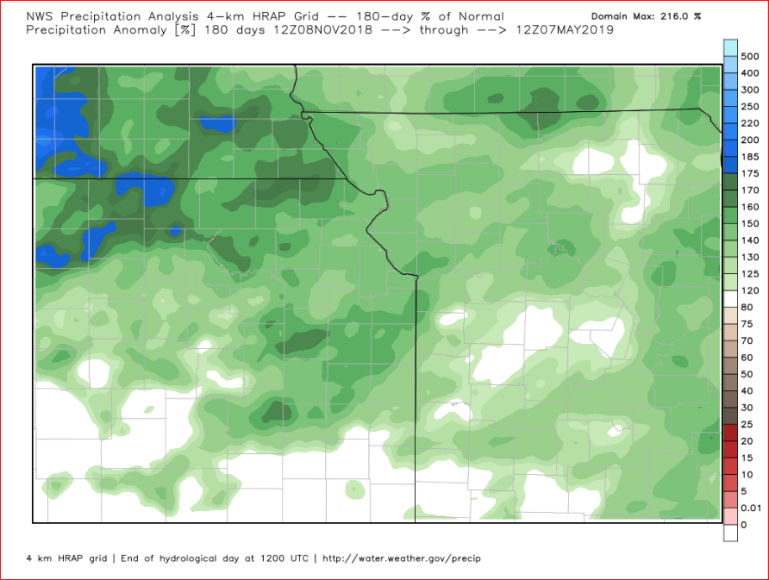 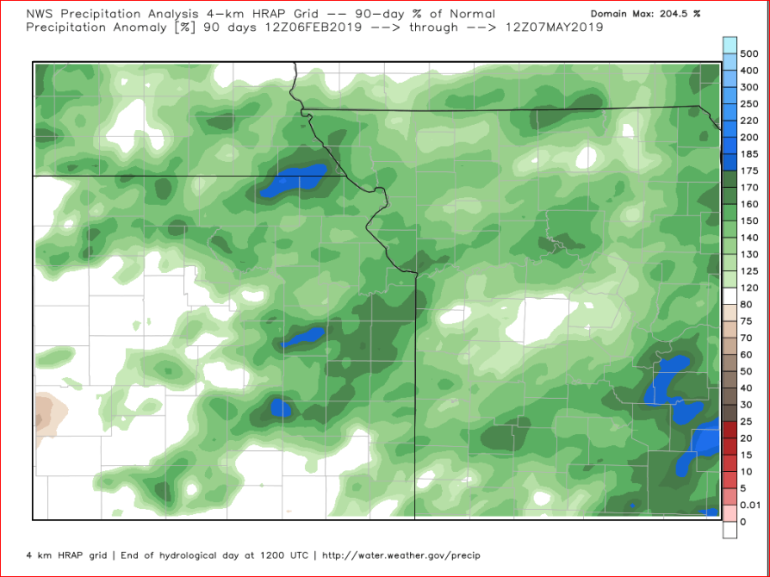 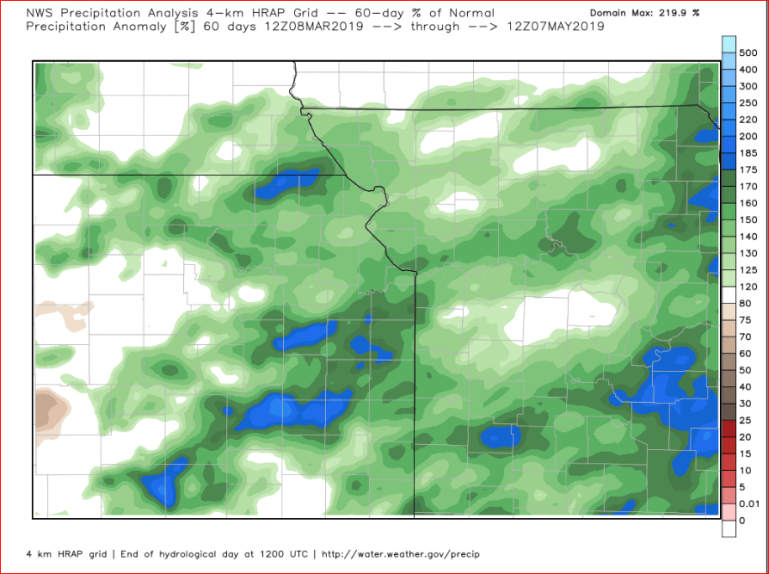 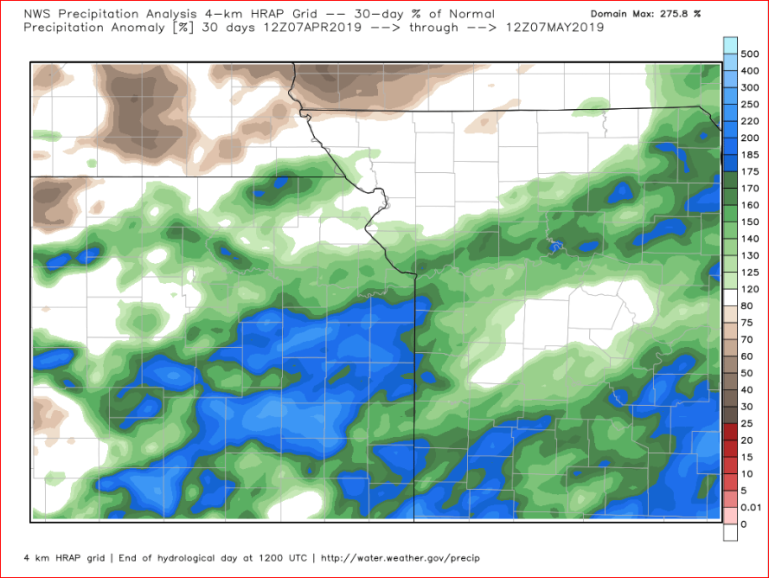 Now IF we look at specific numbers since last October…starting 10/1…the combo of rain and melted snow…pretty dramatic when looking at the same period over the past 130+ years. 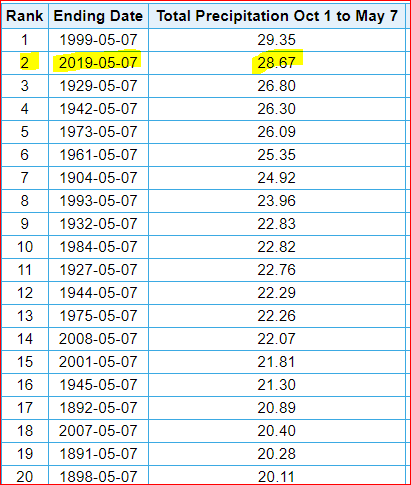 FWIW…#1 was 1999 and that was the 50th coolest summer in KC…and my thoughts are that this summer may sort of follow suit…let’s just say biased cooler than average. 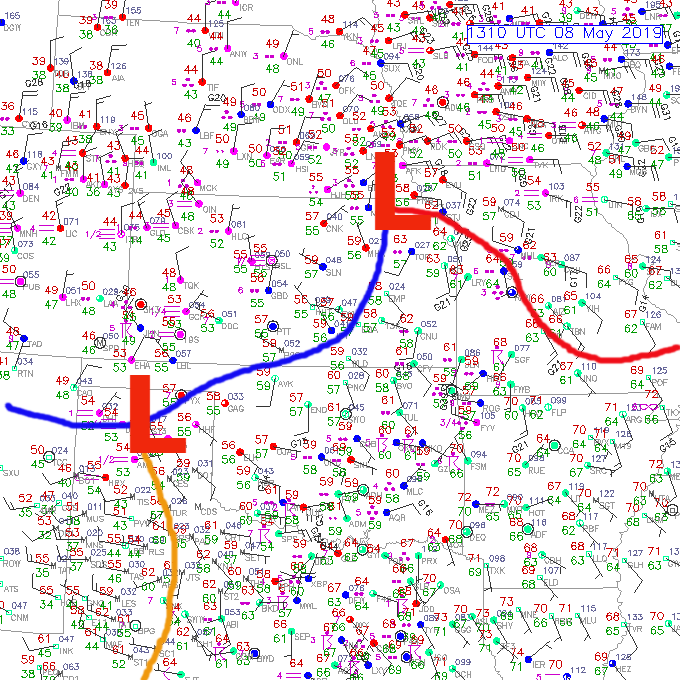 Chaotic mess of atmospheres aren’t too exciting to me in terms of setting up severe weather chances locally. Last night I said there were a lot of issues with this…I called it a very iffy set-up and I’m not too thrilled about it today either.

So many clouds…rain cooled air coming up from the south from the rain down there…a lack of strong heating…and a front that may not arrive till very late tonight…tough to get too excited about the situation at this point.

Not to let our guard down…because of the additional rain risks…but the risk of severe storms isn’t that good looking to me at this point.

It’s worth monitoring in case there is more sunshine or more instability…or things change (they can always change) but once again it appears we may be dodging the severe weather risks and that is a good thing.

It’s been a strange spring locally…where things here just don’t seem to be lining up at this point for severe storms of consequence for the METRO at least. There seems to be always issues with the various set-ups that try to get going.

Even yesterday in western TX… a lot of chasers (so many chasers) were expecting a prolific tornado production day…and that wasn’t really the case down there. 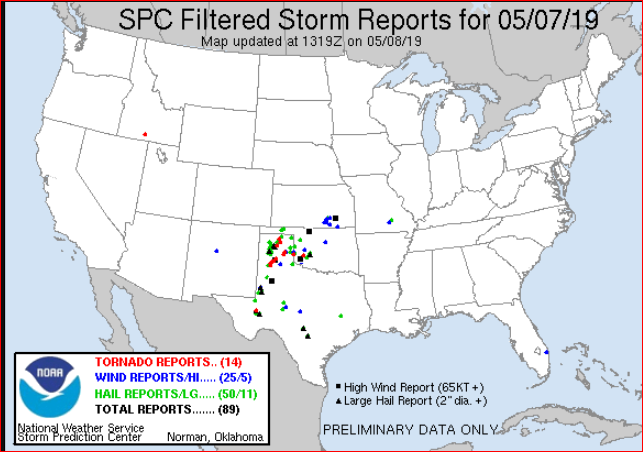 14 tornadoes is still 14 tornadoes…but they were so rain wrapped (mostly) that it wasn’t exactly what many chasers were gunning for down there. Oh and there were sooooo many chasers. my goodness.

There is a LOT of chilly air to our NW…as I showed you on the surface map at the start of the blog (temperatures are in red). With all the clouds expected…and with north winds going…it’s going to be tough to warm up all that much. So it’s chilly for sure.

What I wonder about is that another wave is going to lift out of the southern Rockies later in the day and I can see a path where we could get some showers moving through at least part of the area during the mid-day/afternoon hours. It wouldn’t be much but it may be something that I have to address tonight in an update.

Then Friday we should be OK…

Saturday is also on my radar…I’ve been bulking up the clouds for the day…and I’ve had the rain potential in the back of my head since yesterday but wanted to give it another day before hopping on the potential in the forecast…but tonight I may put in some chances for rain, at least in the morning. There are going to be a couple of chunks of lift coming out of the Plains overnight Friday into Saturday morning. This all may mostly happen while you’re sleeping but at least I’m seeing this potential now…at least the chance of rain before lunch on Saturday morning. It won’t be much but it could be annoying for a few hours Saturday.

Sunday for Mom…looks pretty good with drier conditions then we may stay dry for a few more days too. 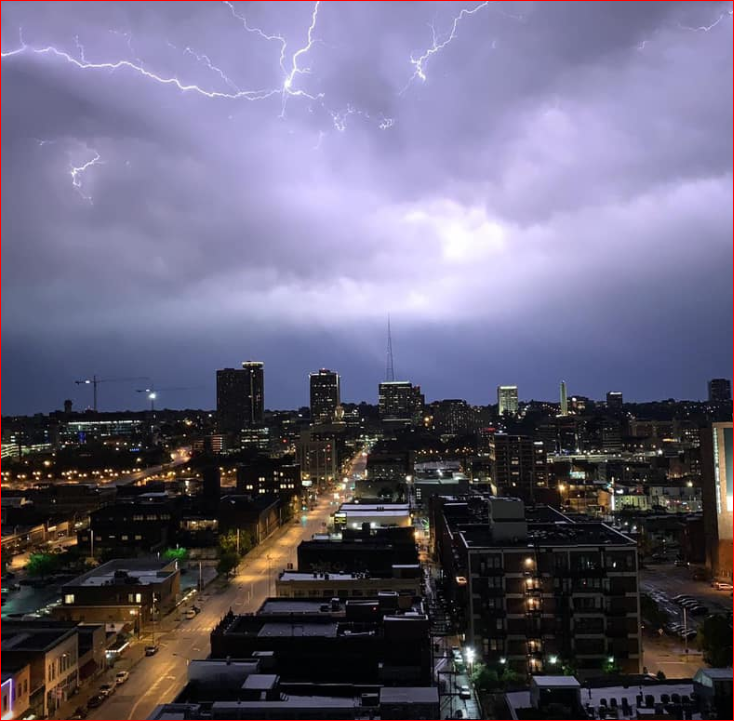