Today will likely be the last somewhat mild fall day for awhile…winds will increase this morning then drop later this afternoon ahead of a cold front that will be moving towards the region as the day moves along. Temperatures tomorrow will be about 20° cooler than today and with the breeze blowing tomorrow…it will feel cooler than that.

There are still questions about the forecast for Saturday as the European model and the GFS model are really not close to being in sync…that leads one to have lower confidence in what will happen Saturday. We’re talking a range from rainy and near 50° to mostly sunny and 60s…and we’re only 3 days away.

Beyond that though…I still think the overall trends are chillier than average…perhaps substantially so heading towards the last week of October and Halloween.

Today: Clouds this morning then some more sunshine in the afternoon. Winds will increase to 20+ mph then subside later today as the switch from the SW to the NW. Highs in the upper 60s

Tonight: Variable clouds and cooler with lows near 40°

Tomorrow: Lots of clouds with some rain towards the south and southeast of KC…cooler down there towards the Lakes. Highs will only be in the 45-50° around KC with a breeze from the north making it feel cooler. Some light showers/sprinkles are possible in the Metro later in the day.

Friday: Partly cloudy and chilly with highs in the 50s

Now here is part two…we had a great conversation…

One of my favorite stories he tells is about the night he had to cover severe weather while at the same time the 10 Commandments was on ABC…cracks me up every time.

I have little faith in the day to day output of the model data…rumors of snowflakes…rain drops…cold…warm and everything in between have been put out there by folks who may not recognize model mayhem when it’s right in front of them.

This isn’t too unusual for this time of the year BUT it seems as though the snow production is somewhat in hyper-drive right now in some model data…it’s also being over-played by some on social media as well in my opinion.

I do have some confidence in colder trends next week.

I don’t have a lot of confidence in what happens on Saturday…and that’s 3 days away…and yet there are some  out there convinced that there will be snow all over the Plains next week. Hey it could happen but boy that’s a tall mountain to stand on from so far away.

The GFS in particular is trying to figure this out..and creates this pretty deep dip in the jet stream in the Aleutian Islands out towards Alaska over the weekend…this then pops a ridge (a really strong one) in central and eastern AK…which then migrates eastwards…and the net effect is this opens the door to colder air to move out of northern Canada and plummet into the Rockies and the Plains next week.

Here is a look at the GFS model…up around 5,000 feet for next Monday…this shows the temperatures (relative to average) at that level…those values are in °C…so double those #’s for °F…that’s chilly air. 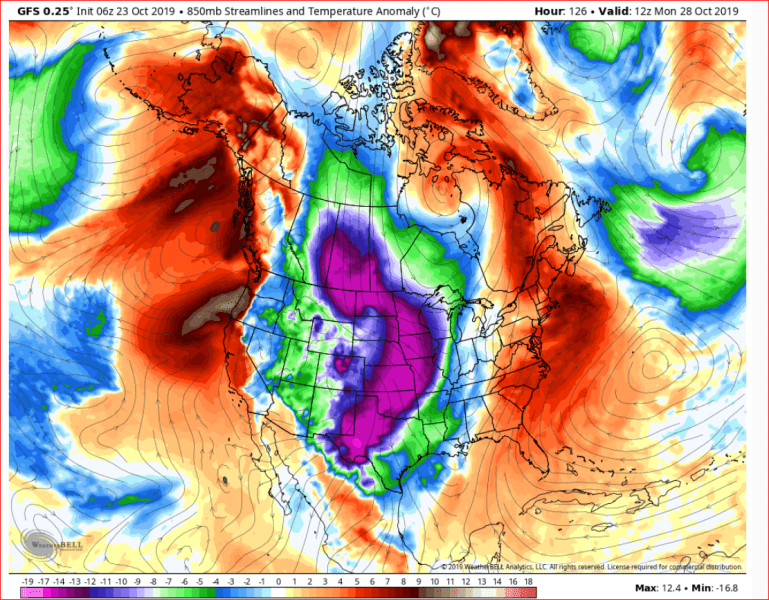 So the really warm air popping in AK…means colder effects downstream…part of the ying and yang of the weather and IF this was winter…this would be an arctic outbreak with the potential of sub-zero cold weather into the Plains.

The EURO data does this as well…

So that’s why I think colder is a good forecast for next week into Halloween.

The devil though is in the details about potential surface systems…creating rain and or snow somewhere out there…and that is the part that can’t be forecast for with high confidence yet. So I have strong feelings for cold…but beyond that…little confidence.

As far as THIS weekend goes…some of the data this morning shows lots of cloud potential on Saturday…but some pretty dry air below about 10,000 feet…this a result of an upper level storm that will be passing towards the south and southeast of KC. This system is what the model data has fought all week too…and this morning the NAM is sort of coming along towards what the EURO has been thinking.

The EURO has been persistent this week in forecasting rain for Saturday. The overnight run has some sprinkles possible but a lot of what falls evaporates mostly. It may be a somewhat cool day but hopefully not a rain out. Still though a somewhat low confidence forecast with the path of the upper level system still in flux…the farther north it comes…the higher risk of rain from KC southwards… 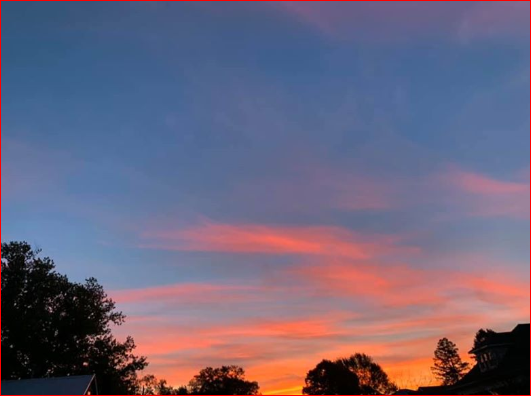