Another one of these tough to figure snow systems is coming our way this week…with some sort of wintry mix converting over to snow at some point o Wednesday…with temperatures near or above 32° likely…this means accumulations will be a bit tricky to figure out and we’ll be trying to decide the rate of snow fall and whether or not that will be enough to stick to the roads and the grass.

The other main feature of the week with be a brief incursion of arctic air that will come into the area and then leave the area. Its part of the winter of 2019-2020 where we just have a tough tie locking into a prolonged cold weather pattern unless it stays cloudy. Since we’re fighting getting snow to stick around for any length of time…it’s tough to lock in the real cold. We’ve had a few stretched of cold…but that was mostly because of a lack of sunshine and wind.

It just seems this winter has been a little strange around here.

An admin note…tomorrow (TUE) our website/web pages will be going through major changes…this may prevent me from doing blogs for a couple of days..I’m not sure though.

Today: Variable clouds and seasonable with highs near 40°

Tonight: Cloudy and seasonable with lows in the 20s

Wednesday: Developing winter mix changing over to snow. Some accumulations are possible, especially south and east of I-35. Highs in the lower to mid 30s

After a pretty nice weekend…time to deal with winter weather again. It seems it comes about once a week but for snow lovers it’s been sort of like pulling teeth this winter to get anything worthwhile. It’s definitely been pulling teeth to get 3″+ worth of snow at any one time.

This week will be no exception.

The added factor this week is a shot of arctic air coming our way behind the storm…and also the fact that unlike the Chiefs parade snow…there isn’t an influx of a lot of dry air to overcome.

That doesn’t mean this will be easy to get snow to stick though…because depending on what time snow comes…if during the day…we may have enough warmth on the pavement to hold accumulations down on the roads for awhile. Then we wait for what sort of moisture is left on the roads as the arctic air comes into the region Wednesday night into Thursday morning.

The cold air is a guarantee…in some winters ahead of an arctic air mass we should have a significant precipitation event but this one right now doesn’t look to come together for the vast majority of the KC area.

One of the reasons why this has been such a pulling teeth winter for snow lovers is that the waves coming our way have struggled to keep organized. They’ve been, at times, a discombobulated mess and they’ve had a really hard time holding together well as they come through the southern Plains and towards the KC area.

It’s just the way of the winter…I still have thoughts at at some point their will be one functional storm that we have to deal with but the snow window is gradually closing starting next week…last winter the snow stopped on March 3rd I think…and that was a snowy winter.

This next system looks to be something that gives us under 1/4-1/3″ of moisture overall with higher totals south of the KC area towards the I-44 corridor region and the Lakes region (sound familiar)…sort of like what happened last week during the Parade Day where we missed a snowstorm by about 75 miles.

In all honesty right now I’m not trusting any of the model outputs…the timing of when things start is just the start of the issues. The NAM model has been persistent in some sort of band of snow…about 2-3 counties wide coming up the I-35 corridor and targeting KC with 2-4″ of wet snow by about noon Wednesday.

The other data really isn’t that fast…and while the data does show snow…it’s more of the dusting to 2-3″ type event. The reason for lower end number is that the air temperatures may be in the 33-36° range…we can get accumulating snow in that range…but it has to come down hard enough and stick. Regardless it will be a wet sloppy snow (great for snowmen…snow balls) and that type of snow has a low liquid to snow fluff factor so it takes more liquid to get more of an accumulation. This system may struggle to give is 1/4″ of moisture so with the poor snow ratios…perhaps 7-9:1 or so…that means a bigger struggle to accumulate.

The arctic air comes down towards 12AM Thursday  (perhaps a 12AM high on Thursday) then dumps into the area in the morning and then starts to move away towards the evening. 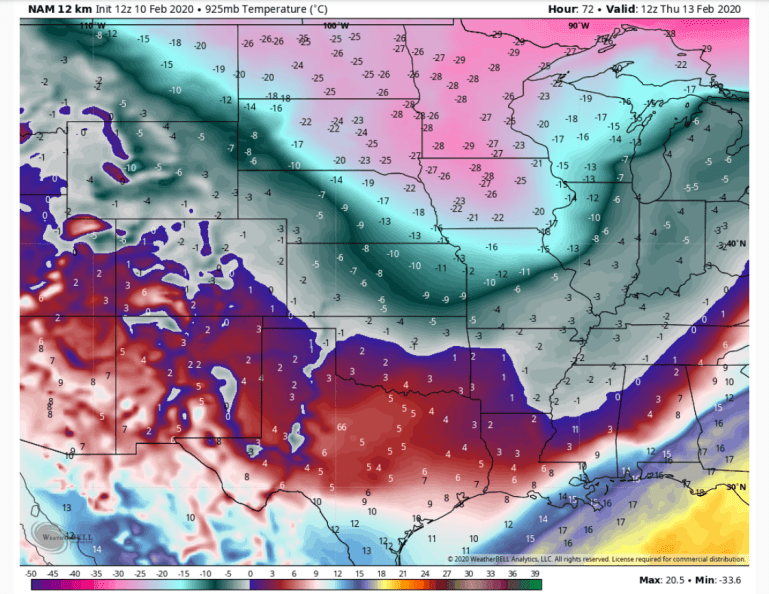 That is some COLD air at that level…-20s C from IA to the upper Midwest.

It sort of slides more towards NE MO that farther west…so we dip into it then that air mass rotates away but even with that highs on Thursday in the afternoon may only be around 20° or so with sunshine.

My concern about the timing of the arctic air would be the potential of black ice on Thursday morning IF things don’t dry out in time and then the arctic air arrives. There will be a lot of wind with this transition into the arctic air mass so that will help the drying process.

I have a few other things I want to touch on…but mainly this one…the Arctic Oscillation. I haven’t really talked about this a lot this winter…but…let’s quickly visit about it.

“The Arctic Oscillation (AO) is a large-scale climate pattern that influences weather throughout the Northern Hemisphere. It alternates between a positive phase (left) and a negative phase (right). In its positive phase the AO tends to bring warmer weather to the middle latitudes, while in its negative phase, winter storms are more common in the Eastern United States and Europe. Credit: J. Wallace, University of Washington” 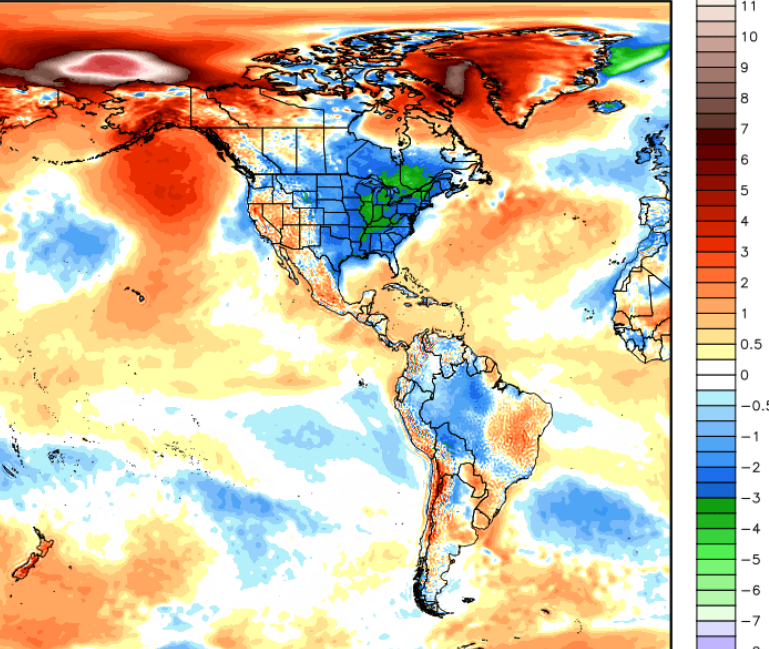 Here is the data…

Look towards the most current day…today…note how high the bar goes…that’s not a “little” high…that’s a lot high or positive.

So “positive” that it broke a record…which in and of itself is pretty amazing.

The most recently observed Arctic Oscillation is the highest daily value in our historical record (6.34), breaking the past record from February 26th, 1990 (5.91). #AO https://t.co/YWilD9lYGu pic.twitter.com/84Vc1pzSnH

So just for giggles I wanted to see what the upper air pattern looked like on that date…this is up around 18,000 feet or the 500 mb level. There is an upper level low in the SW…a big ridge off the western US coast extending up into western Canada…and a dip in the jetstream across the western part of Hudson Bay and off the New England area. This was for February 26th, 1990. 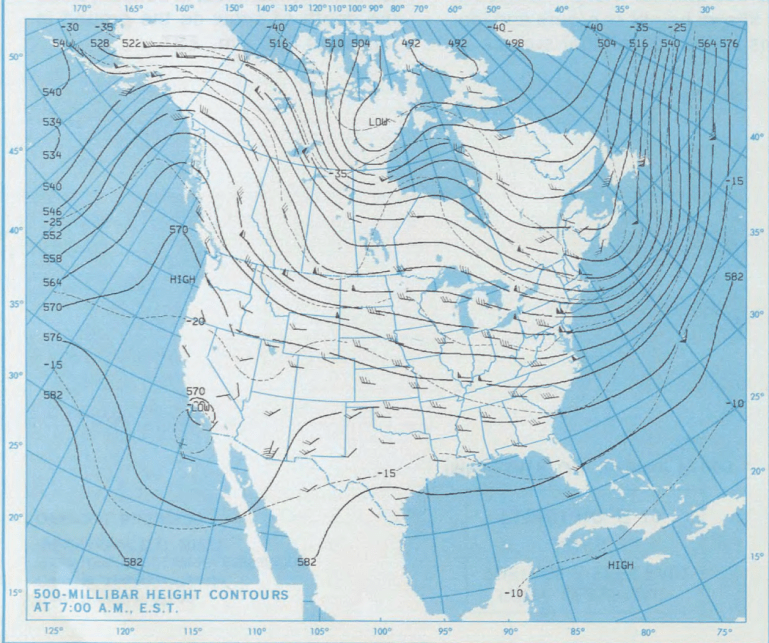 Now take a look at this morning… 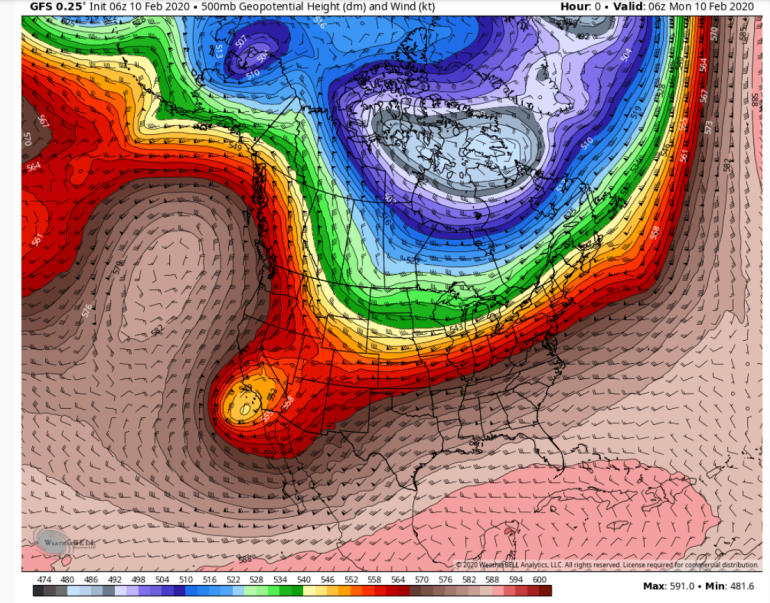 There are more than a few similarities…granted things are off in some cases by hundreds of miles BUT the idea is there. 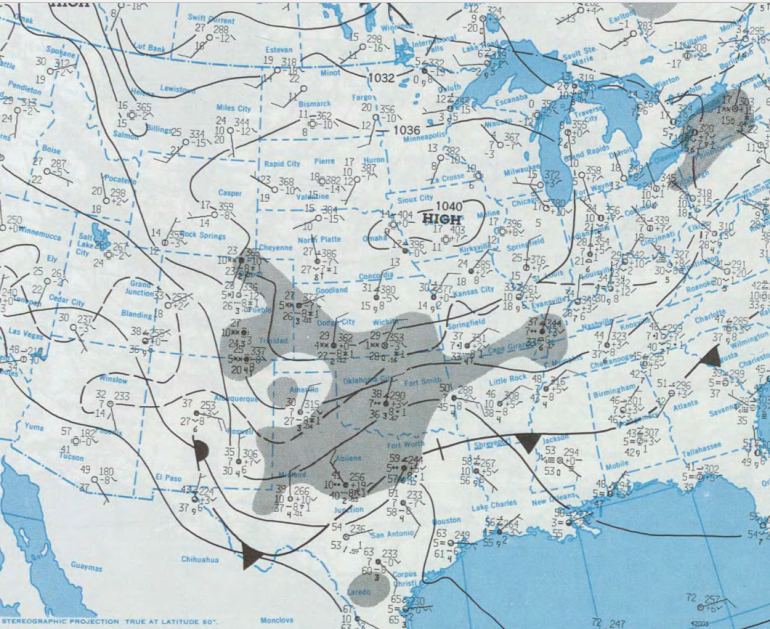 Normally that would have a lot of Arctic air with it but perhaps because of such a raging AO back then there was no real arctic air to tap into.

This time there will be (briefly).

This too is fascinating…and connected to what I mentioned above I bet.

An unofficial transatlantic flight record was set on Saturday night when BA flight 112 made it from JFK to London in 4 hours and 56 minutes. You can thank the jet stream for this record, as winds topped 200 mph. https://t.co/LTfNe08YlG pic.twitter.com/Z1uUkb0dYP

OK that is a lot for one day…hopefully a blog tomorrow but like I mentioned their doing some major website changes tomorrow so I’m not sure about my access.

Our feature photo comes from Brenda Hill down in Overland Park of the full moon last night. 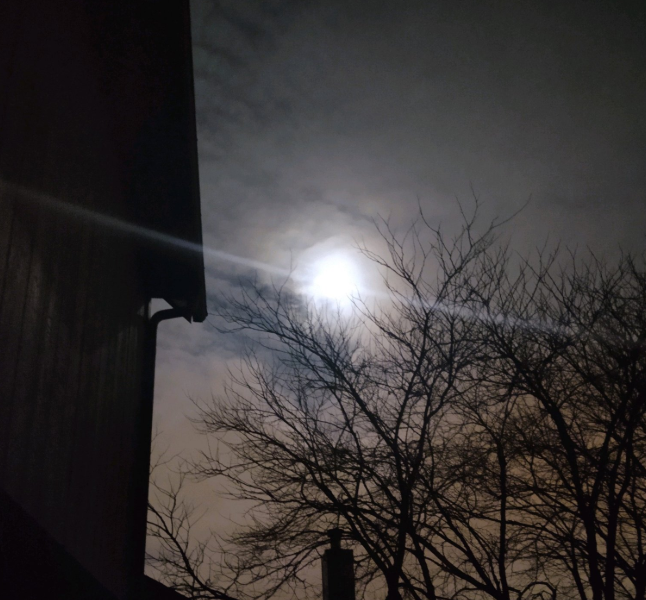