Good Friday and once again a big hello to all the blog readers that I talked to yesterday at School Day at the K. At least 12,000 kids came out and as usual we had a blast. The show was essentially non-stop experiments and it was fun as usual. Meanwhile the weather worked out perfectly. The sun made an appearance about 15 minutes before showtime so things were even better than expected. We knew the rain would end…the issue was whether or not the tarp would be on the field or now…and they were able to take it off 90 minutes before showtime.

The weather today won’t be great…won’t be terrible Just sort of blah with scattered showers around and cool temperatures for May.

Next week gets wetter again.

Today: Scattered showers and chilly. Highs 55-60°. Not an all day rain…just hit or miss showers at times. Amounts will likely be under 1/10″ for most of you.

Tonight: Drying out and cool with lows in the 40s

Saturday and Sunday: Nicer with highs near 70 Saturday to well into the 70s Sunday with more breezy conditions.

Here’s radar for today…don’t really want to get to into today…this is such a minor event…but in a wet week…I think we’d rather have the weather tomorrow…today.

Next week we have issues again.

The atmosphere as a whole won’t be drying out again until sometime on Thursday…so that essentially means that from Monday through Thursday we’ll be vulnerable to storms/heavy downpours.

For Monday, during this time of the year just the increase in moisture in a short time frame (compared to Sunday) can generate storms. The chances are certainly there for this heading into Monday morning. The issue as well on Monday morning will be a developing Sunday night low level jetstream…this sends the moisture upwards…where it will cool and condense and we’ll end up with thunderstorms. It’s not out out of the question that there could be some hail with those storms in the early part of Monday. There are some differences in the model data with the placement of the leading edge of this low level jetstream. So it’s not a slam dunk…but it will be watched over the weekend. If nothing else you should start to notice increasing south winds…some higher dew points and warmer weather).

On Tuesday…a front will gradually sag southwards with time Monday night into Tuesday. This front will come into the thicker moisture and the warmer air and will create and allow the rain that is created north of the region to hold together. That means storms and rain are likely on Tuesday. How far south that front gets (as it slows) will be important for Wednesday chances. With the front near the region on Tuesday we may have to watch out for some stronger storms however there are some indications today that this may not be as big of an issue as what could happen in May because of overall instability questions. There will be a LOT of moisture though in the atmosphere waiting to be tapped…so locally heavy rains are certainly possible even IF we don’t have severe weather.

Wednesday…the front that will be south of here will likely stall…near or north of the I-44 corridor. It’s possible that IF there is more activity on Tuesday that this could be farther south. That is a problem because a low pressure area will be developing and coming along that frontal boundary and the closer it’s to KC the closer the low gets to KC. IF the set-up is north of I-70…we would run the risk of severe weather as the risk of instability would be greater. IF it’s south of KC…depending on how far south…the risk of severe storms would be lower but the rain will still be an issue in a very saturated atmosphere. Again the common theme from Tuesday and Wednesday is the potential for heavy rains.

Then by Thursday the whole mess starts to move away as does the rain issues. Hey we could be setting up for another nice weekend next weekend. Maybe.

Putting it all together…multiple triggers…the month of May…lots of atmospheric moisture…and I think we’re looking at another 1″ (if we’re lucky) to potentially, in spots 5″+, of rain. The guidance is again screaming about this set up. The EURO model and it’s various ensembles are the next chart…it goes out to 10 days (240 hours) 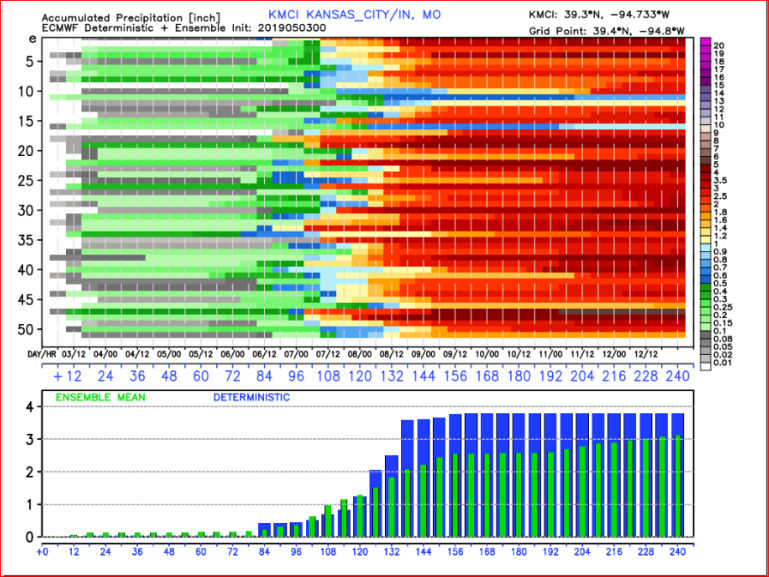 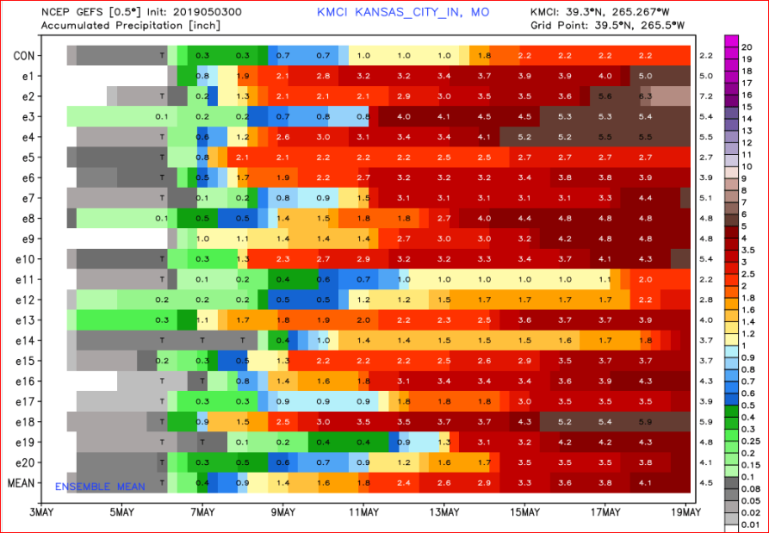 So you get the point.

We’ve started May cool this year…and with the wet weather…one can’t help but think back to the study of contrasts between last April, the 2nd coldest, followed by the crazy warm May of ’18, the 2nd warmest.

Also note the difference in drought…we were sort of feeling the effects, especially north of the KC Metro last May at this time…but obviously that isn’t an issue this May. By the end of May last year…severe drought conditions were expanding through areas north of KC. 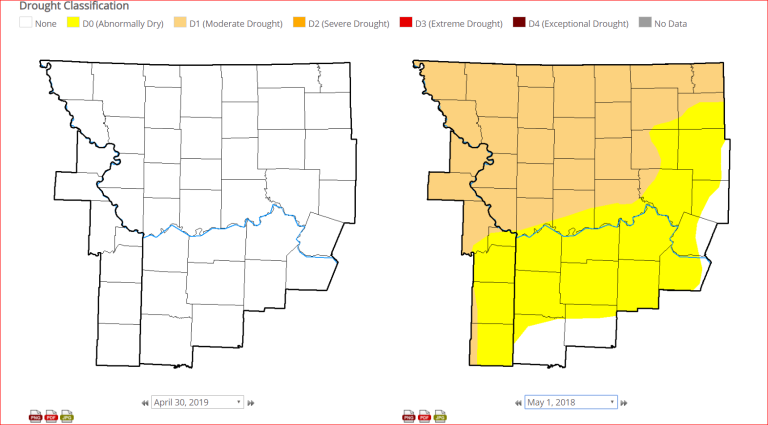 This is going to be a totally different May compared to last year…it won’t be nearly as warm>hot and it should be wetter. Last May though we ended up with 5+” of rain at KCI…most of that came in two days…the 2nd and the 16th I think.

We also had 6 days with highs into the 90s…including 5 out of the last 6 days of the month…it’s going to be very tough to get to 90° this month will all the moisture out there in the soil. This moisture could also mean a very delayed 1st 100° this summer…if we even get there to begin with…we’ll see.

So many great shots of the rainbow(s) from the other night…here is the feature photo from ‎Kimberly Peterson out in KCK. 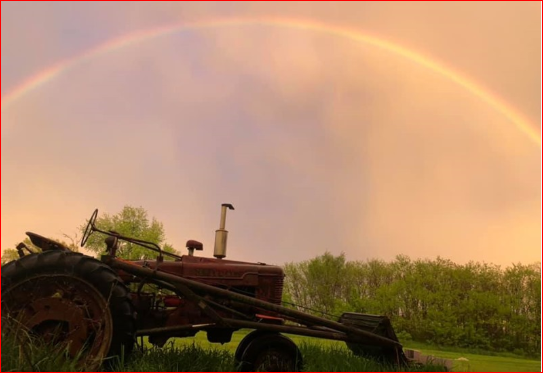