Happy Wednesday…with another very comfortable start in the KC area this morning. Unlike yesterday when we briefly touched 57° to tie a previous record low…today we missed it by a couple of degrees. The record stands at 57° set back in 2004. The forecast is overall a dry one through the weekend…but there are small chances of some rain drops out there later tomorrow or tomorrow night. The pattern for now is that we’re in NW flow and that means we need to watch for little disturbances coming down in that flow from the NW>SE. Sometimes they aren’t modeled well…and sometimes they can create little showers or sprinkles.

Today: Some morning clouds but otherwise mostly sunny and mild with highs 80-85°

Thursday: Partly sunny with an outside chance that some light showers or sprinkles pop up somewhere out there. Highs near 85°

Friday: Mostly sunny and warmer with highs close to 85°

These last few days have been marvelous and today overall will be about the same. The main relief…temperatures and especially dew points are most welcome for this time year especially.

Dew points above 65° are typical…and above 70° aren’t that unusual…above 75° catches your attention.

Dew points in the 50s in late July is pretty unusual. Here is the 7AM surface map…

High pressure has moved into the Plains…

Compared to average though at 8AM…we’re still sitting pretty. 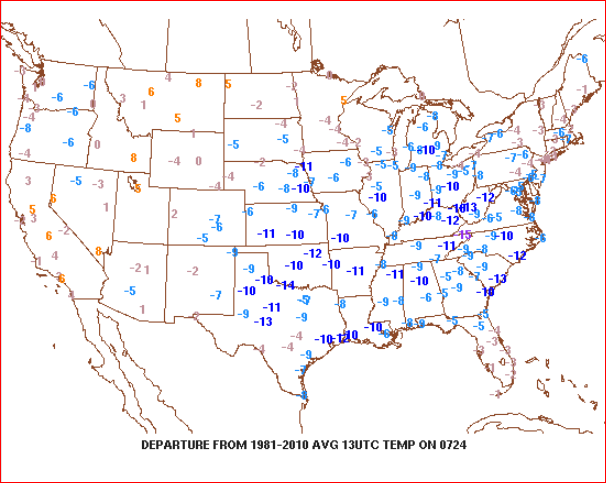 Air around a surface high circulates in a clockwise manner and blows away from higher pressure. Things are moving slowly so that this air mass is sort of just recirculating across the region right now. So the air isn’t getting too modified too quickly. 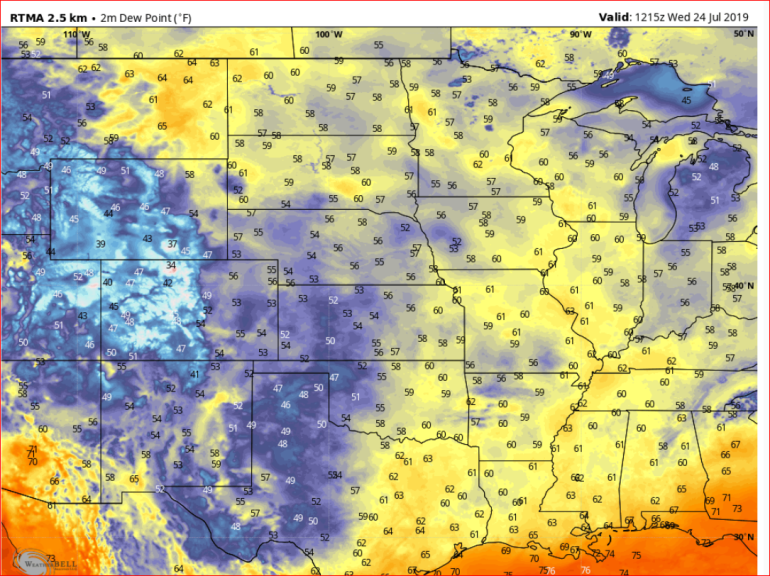 Again remember IF you have dew points in the 60-65° range…that is really pretty OK for late July..even the folks down in Dixie are enjoying this nice air as well compared to what things are typically like!

Where are the dew points higher? How about in the deserts of AZ. 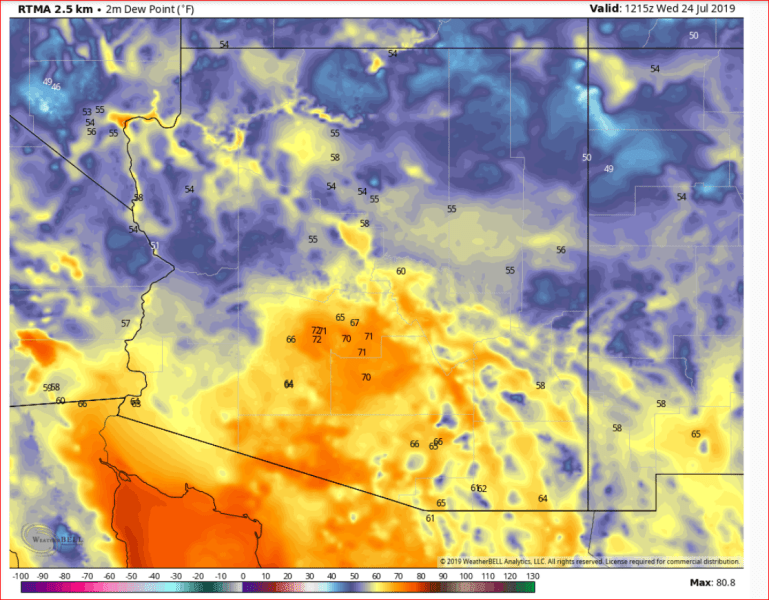 This is some monsoonal moisture that has worked it’s way into south central AZ.

There have been some storms out there, especially in the more mountainous terrain. I’ve spent some time time talking about the fire burning north of Flagstaff in northern AZ. Yesterday I showed a fascinating timelapse of what happens when a fire is hit by a heavy thunderstorm and how it reacted to the rain that fell.

Just for the heck of it, here's the #MuseumFire near #Flagstaff via Sentinel-2 satellite, taken 7/22/2019 18:24 UTC (False color/Urban image). Footprint of the fire is outdated. pic.twitter.com/AmGnrFPrfA

The thunderstorm brought so much rain so quickly that there was flash flooding in the area. What the concern is is that the fire has burning through vegetation and has left a “burn scar” on the land. When the rain falls you have tremendous runoff, there’s nothing that gets absorbed so you get flooding. So while the fire was burning you also have flash flood warnings and sand bagging operations happening to try to avoid the flooding issues. Crazy.

I would imagine though it was mostly welcome up there.

So far the overall fire season in the western US seems like it’s not starting off too crazy. There was a lot of moisture out there this winter…and now that things have dried out there are concerns about what happens down the road with human/lightning caused fires in the western third of the US.

While is seems things are going OK out in the western US (for now)…look what’s happening in AK.

#SuomiNPP continues to keep an eye on one of the worst wildfire seasons in Alaska. Over 2 million acres have burned so far. The 2 largest fires, Hess Creek and Chalkyitsik, can be seen in the far left and far right of this S-NPP image. More here: https://t.co/6g4zcZokfs pic.twitter.com/V3nr8axegI

AK has been crazy warm (for them) all year long.

On the other side of the country 2 tornadoes hit the Cape Cod area yesterday including this dramatic video of a motel losing it’s roof from the strong winds. Wow!

and on the other side of the Atlantic intense and potentially deadly heat continues in Europe. More all time record highs were set there yesterday and more may happen over the next few hours today. The temperature anomalies (up at about 5,000 feet) are pretty impressive in that part of the world. Remember most don’t have air conditioning there. 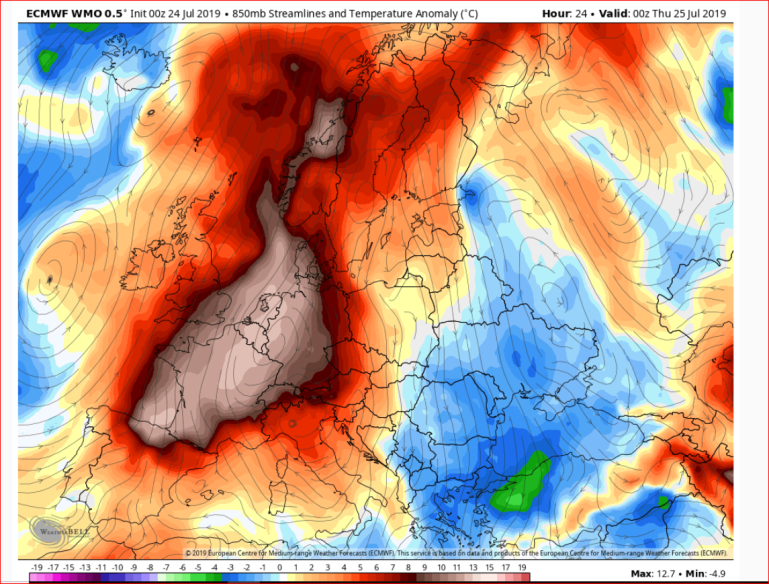 #France set new temperature records on Tuesday as temperatures topped 40°C. Many more heat records are expected in the next 2 days in countries including France, Germany, Belgium, NL, and possibly UK, during Europe's 2nd intense #heatwave of the year.#ClimateChange pic.twitter.com/PoAM3h4Ku3

Second blast of intense heat on the way tomorrow across parts of Europe. Here's the current records v forecasted highs:

This is their 2nd major heat wave this summer. Some relief comes over the next few days (especially over the weekend) for a pretty decent swath of western Europe at least.

Well I think I’ve covered a lot of bases and a lot of terrain! I want to give you a heads up that I’ll be taking my annual golf vacation/trip to Arizona starting Saturday. So odds are there won’t be blogs for about 10 days or so. I’ll get another one or two done this week before I leave though. 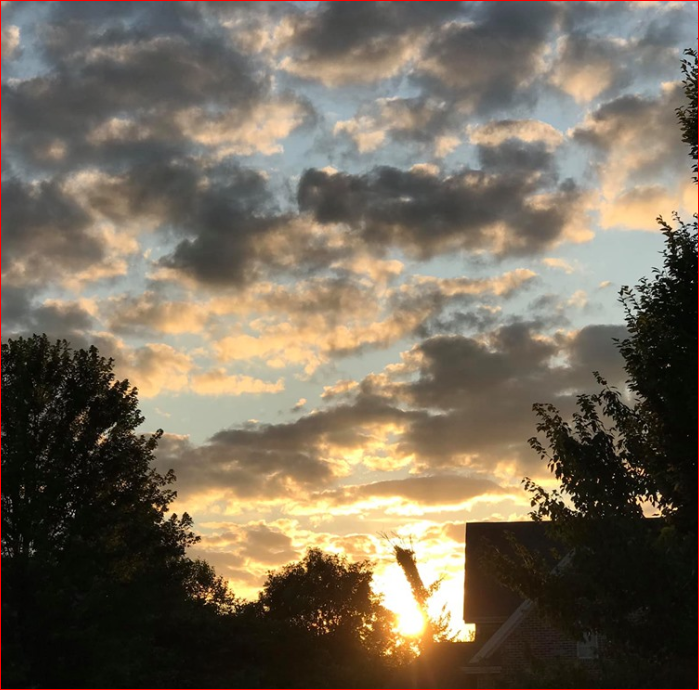