Good morning…it’s going to be a great day in the KC area today with soaring highs and a cold front coming southwards. That front will send the nice warm weather away from KC rather abruptly this evening and replace it with blustery conditions and falling temperatures. Tomorrow should be 20+° cooler that today and it will feel even colder, especially in the morning.

This is cold shot #1…cold shot #2 comes Sunday with the potential of falling temperatures during the day after a “mild” morning. That cold shot should linger for a few days into next week. No records…but still pretty darn cold for November standards.

With all these changes though…very little moisture is expected in the area. No big storms into the 3rd week of November as we’re starting to dry out now. Not uncommon for the fall season really…but by the same token some moisture might be welcome soon.

Tonight: Increasing clouds this evening and blustery with falling temperatures and perhaps some drizzle developing. Turning colder as the evening moves along with north winds gusting to near 25 MPH.

Tomorrow: Sunny skies and chilly with highs in the upper 30s

Friday: Cold morning..near 20° and a chilly afternoon with highs near 45°

Since I’ve blogged extensively about the coming cold…no need to rehash this.

So about the dry weather…

Kaden yesterday asked a question on the blog about the dry weather and perhaps concerned that this dry weather of late will impact the coming winter…thought it would be a good topic to expand upon today.

We had a pretty wet September…more than 2″ above average but since 10/2 when we had .65″ of moisture marking the end of the hotter weather from September and the 1st 2 days of October…we’ve dried out pretty significantly. We’ve had about 1″ of moisture from 10/3 onwards…and not much is expected for the next 10+ days. 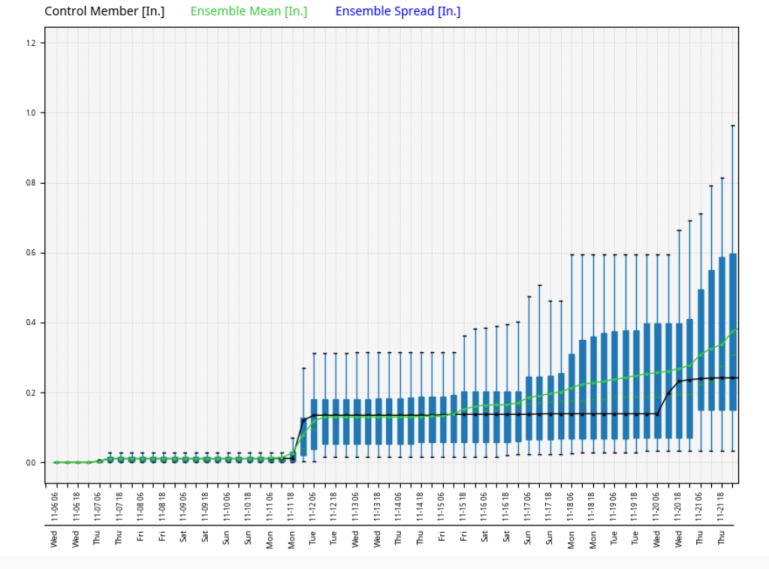 Not overly exciting and I don’t think the EURO has even that much…so essentially more dry weather with little decent moisture for awhile it appears. Not uncommon in the fall really and certainly not when you get repetitive shots of cold to arctic cold air masses in November…it tends to strip the atmosphere and shove the best moisture south of the region.

Kaden was wondering though if there are connections to these drier times and a lack of snow through the winter season. So I did some research for him.

The data for this century, including 2000 onwards is more or less all over the place…whether it’s wet or dry since October 1st…which was the benchmark I used in this. 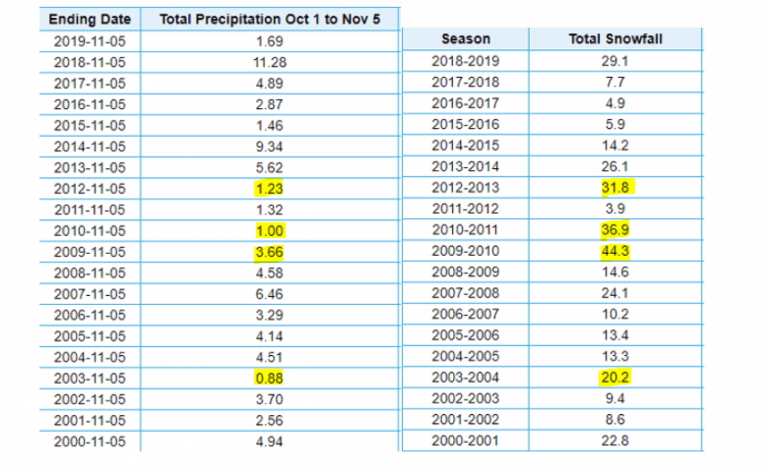 You can see that there have been some pretty wild swings in snow one way or the other and also wild swings in precip amounts (mostly rain) from 10/1-11/5.

I highlighted for you the dry years where there was substantial snows…(my bad on 2009 though…that was a slightly wet year. So there were times where dry years meant less snow and times when it was the opposite. Around 19″ is average for snowfall in KC from October onwards.

The takeaway…no connection one way or the other…but I loved doing the quick research into that and thanks Kaden for the question.

As far as today goes…the near 9AM map shows the front up north of KC…that should move through during the latter part of rush hour. 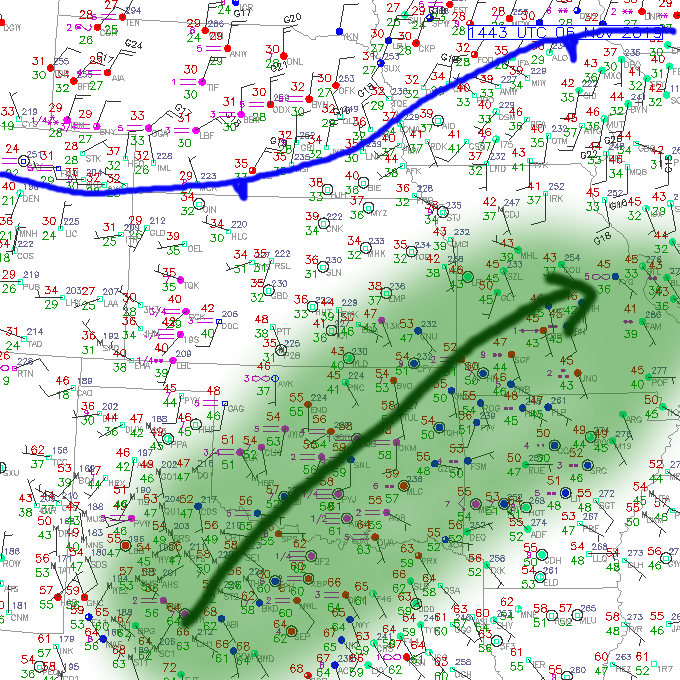 There is moisture to the south in the form of a lot of clouds…but that will be shunted towards the southeast of KC today meaning we get to see a good deal of sunshine.

We’re sort of in this favorable slot of moisture south and clouds north…with a wedge (for now) of clearer skies. Let’s see how long that lasts today as the cold front comes farther south as the afternoon moves along.

After the frontal passage we should be near 32° after 12AM and in the mid 20s (or lower) by daybreak. Tough to recover tomorrow despite the sunshine.

Saturday looks mild too…60s before the next front comes into the area sometime on Sunday…we may briefly warm up on Sunday before turning much colder sometime in the afternoon and that drop goes through early next week. Some flakes are possible on Monday but nothing too crazy I don’t think.

Our feature photo comes from Sean down in Ottawa, KS…harvesting with a stunning sunset yesterday. 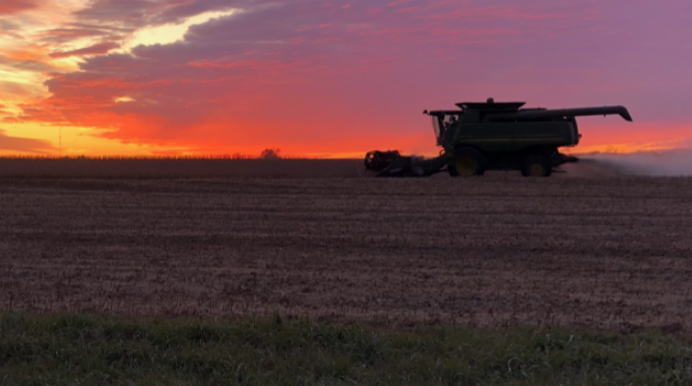 Happy Wednesday...I'm back today after having a few days off. Didn't really do anything aside from a few things around the house and played a bit of golf. The weather was wonderful and the lack of rain continues to be a thing. There are going to be some chances down the road, but despite the temperatures going all over the place there aren't any big storms showing up quite yet but there may be "players on the field" for something down the road.

Those players are mostly more extreme air masses setting up. This is the time of the year where Canada starts getting colder and colder...in part due to less daylight...and the southern US stays warm>hot. As the boundaries push against each other...things get a bit more interesting.