Summer heat isn’t done yet in KC…we’ve actually had several days with highs in the 80s…and today will be possible 90° afternoon high, depending on the clouds that are still filtering out the sunshine. Temperatures have been outperforming over the past couple of days so we’ll see how that pans out at the end of the day.

The heat blast is still likely on Monday and everyone will also notice the higher dew points over the next few days. Monday could be a nasty heat index type day…

Also of note is the rain chance tomorrow morning…and then again tomorrow night (scattered) and also Monday evening into Tuesday morning…associated with a weak front moving in.

So there is a lot going on as I’ve blogged about for the last couple of days.

Today: Partly cloudy and seasonable with highs around 90° and heat index values closer to 100°

Tonight: Turning cloudy and muggy too with lows in the 70s

Sunday: Rain chances in the AM…can’t promise a lot of rain though at this point. Thunderstorms though may increase some local totals. Then we should dry out nicely before lunch and again heat up to near 90°

Monday: Hot and humid with highs soaring into the mid 90s with heat index values popping to near or above 105°. A cold front will be coming into the area Monday evening…there may be some storms with that into Tuesday early morning.

The month is only 9 days of data old (as of this morning) and temperatures are running near average for the month so far. We’re actually 4/10ths of a degree below average so far but should nudge that closer to or even above average over the next 10 days or so as an overall warming trend starts.

Average high temperatures are gradually dropping towards the end of the month especially…here is a handy chart showing the average highs for every day of the year. 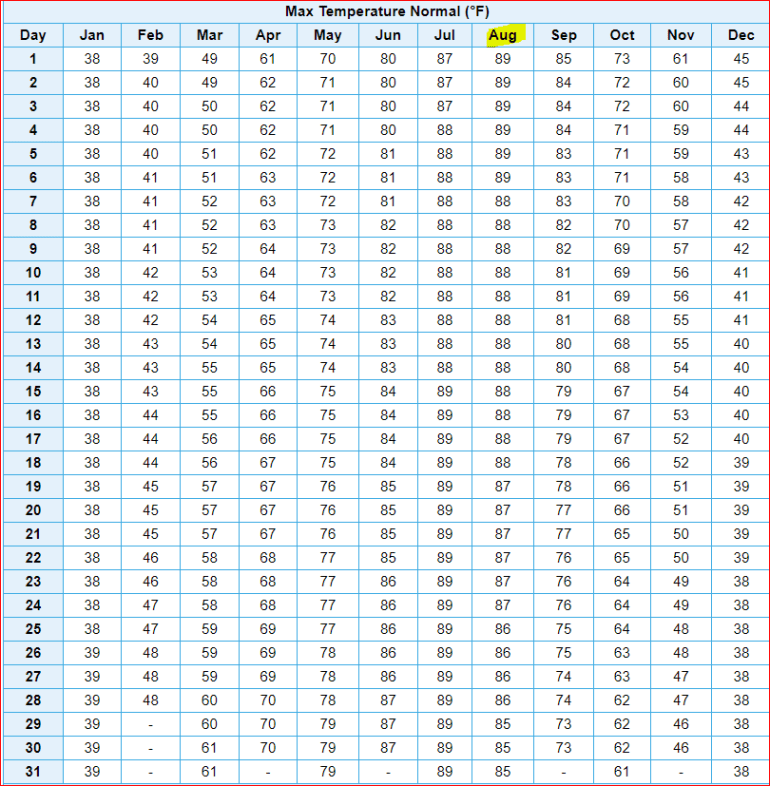 We’re losing daylight now every day…since the 1st day of summer we’ve lost about 35 minutes of morning daylight and about 27 minutes of evening daylight because of the later and earlier rising/setting sun…more than an hours worth! Today though we still have almost 14 hours of daylight though.

That gradually diminishing daylight and lowering sun angle continues till around the 1st day of winter. After a while this has an effect to the temperatures and the land starts cooling off more and more. 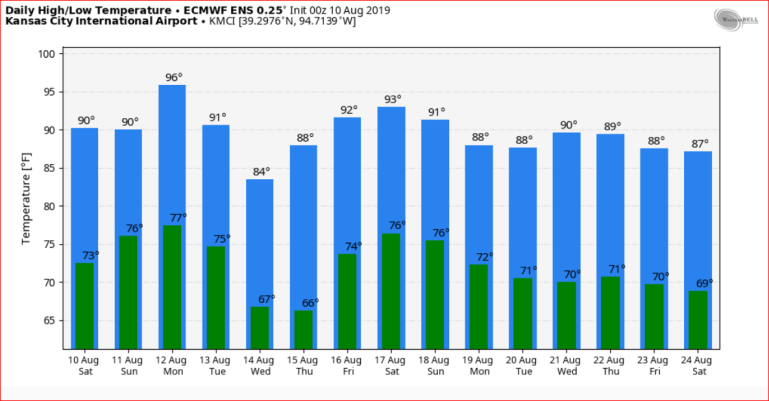 So the “overall” look is warmer…nothing outrageous but just a reminder that summer has some pop left.

Monday it should “pop”.

There is a lot of surface moisture out there…dew points are into the 70s…and they may trend a bit higher over the next few days…so when we get hotter Monday that’s a nit so nice combination.

Today we’re fighting some residual cloud cover that really needs to thin out IF we’re going to get to 90° this afternoon.

It’s trying as I type this…

Overnight tonight storms will start getting together over in western/central KS…and start moving towards eastern KS. How far east they get and in what shape they’ll be in when they get here near day break Sunday will go a long way in determining how much rain we get. Regardless it does look like they should be in a weakening phase as they get closer to us. So that’s why the rains may not be overly impressive, especially the farther northeast and east away from the Metro you go. Here is the latest HRRR model that should auto-update as the day unfolds.

Temperatures tomorrow will be influenced by how long the residual rain/clouds linger. One thing for sure…it’s going to bake towards the SW of the region tomorrow afternoon… 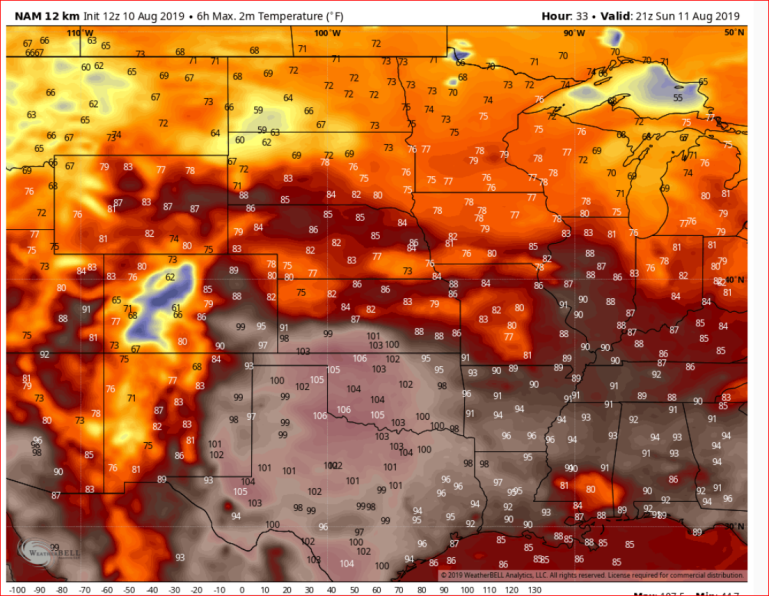 Look through southern KS and OK/TX…100-105°…the heat is just sitting there.

Of interest is aloft that heat will be transported to the area early Monday. As a matter of fact before you even wake up Monday morning the temperatures a few thousand feel above us will be near 85°….that’s pretty impressive with stronger winds above the surface too. By noon Monday the air above us will be close to 90°!

Now with sunshine expected I think temperatures Monday could really pop…95-100° not out of the question. A cold front will also be coming towards the region later in the day…so that will help to focus the heat even more into eastern KS and western MO. Of interest as well is that while the air aloft is real hot to start the day the hottest air aloft actually moves away from the KC area in the afternoon. So it’s possible the near 100° heat may be shoved a bit farther to the southeast of here?

My thought is that the dew points may be close to 75° when this all happens…and that means the heat index really pops…near 100° by lunch and then up from there in the afternoon…miserable. It’s not out of the question some areas towards central MO may see near 80° dew points…that means heat indices above 110° for some.

As mentioned a cold front will be coming into that heat and building instability…there will be cap in place ahead of the front…but IF we can weaken that cap we could see some strong storms develop that evening into early Tuesday AM. It’s NOT the greatest set-up though…SW winds ahead of the front and WNW winds behind the front so the two air masses battling it out in the area won’t be banging against each other too strongly…but fronts into near 95° heat with 75° dew points always bear watching regardless of what the models suggest.

We’ll see how much cooling we get on Tuesday…it won’t be as hot…likely back down into the mid>upper 80s.

Our feature photo is from ‎Sally Kirkpatrick Last night I talked about the moon and the planet to the lower right of the moon…it’s Jupiter…and Sally went out and grabbed a picture of it! 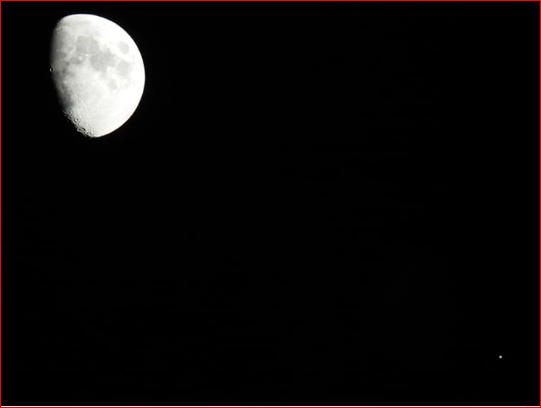 It’s that tiny bright spot in the lower right!