The main weather story is to “enjoy” the next couple of days of “less” heat and get ready for more heat starting Wednesday. The only thing saving us right now is the remnants of what was Barry with it’s moisture and rain cooled air flowing up from the southeast. We’re in that air mass for the next 2 days…till early Wednesday…then with it spins away..the blast furnace rolls into the region.

Today: Variable clouds and not as hot with highs in the mid 80s. A few showers are possible towards the east and SE of the KC area. Chance in the Metro is about 10%

Tonight: Partly cloudy with lows in the upper 60s

It’s actually not been too bad of a summer in KC, at least in terms of the number of 90° days so far. Assuming we don’t get there today up at KCI…here is how we rank… 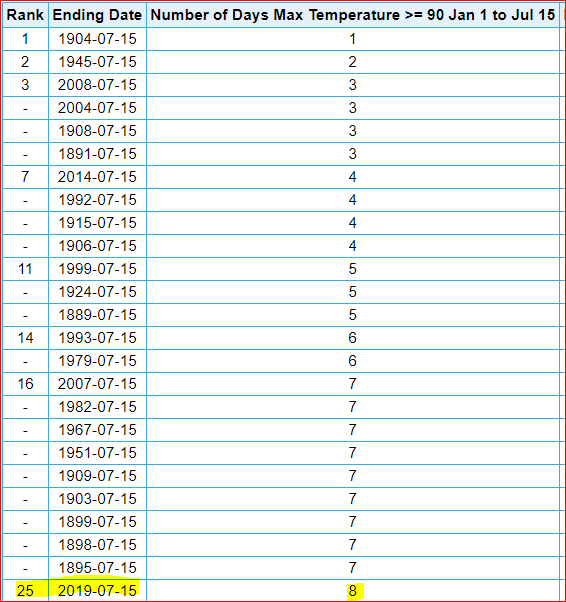 IF we don’t get there tomorrow…we’ll move up to 21st fewest.

From there though we’re going to add them up again…

Last week I issued a heat wave alert for the KC region. This isn’t any official thing from the NWS…just a set-up that was recognizable from days away and I wanted to “punch” it up a bit aside from just saying it was going to get hot. Maybe it was an easier way for you to remember what was likely coming.

It will come in full force on Wednesday.

Our “heat wave generator”…really the 1st of the summer locally is going to set up in the southern Plains into the middle of the country. This will divert the jet stream towards the north of the region. When the jet is that far north…cold fronts can’t penetrate down into the I-70 corridor…they typically stop at the I 80 corridor or the I-90 corridor (farther north).

When that happens our weather sort of stops too in a sense. The heat just becomes locked in. The map below shows the flow up at around 18,000 feet or what we refer to as the 500 mb level. The black arrows are the jet stream. The jet stream is a river of air that separates the hotter and the colder air masses (at it’s most basic). 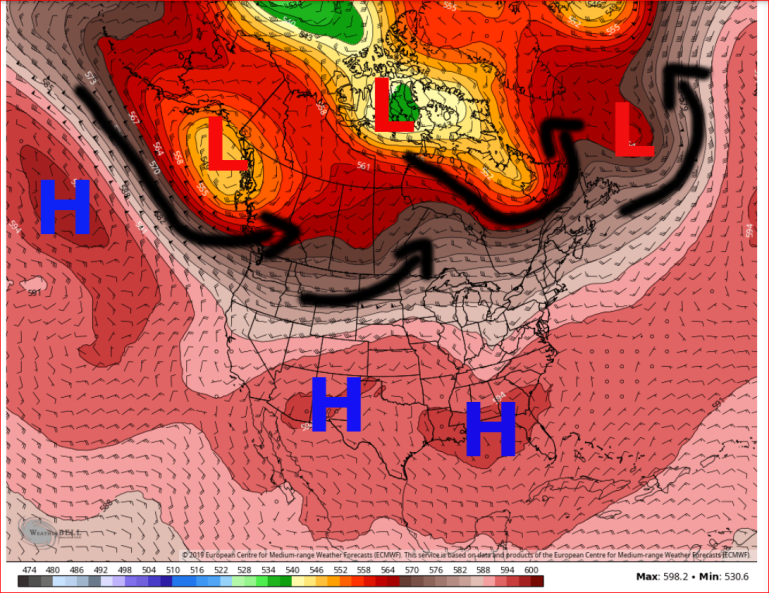 You can see how this translates farther to the surface…by looking at the 5000′ temperature anomalies (compared to average) for the same period…which is for Wednesday afternoon. 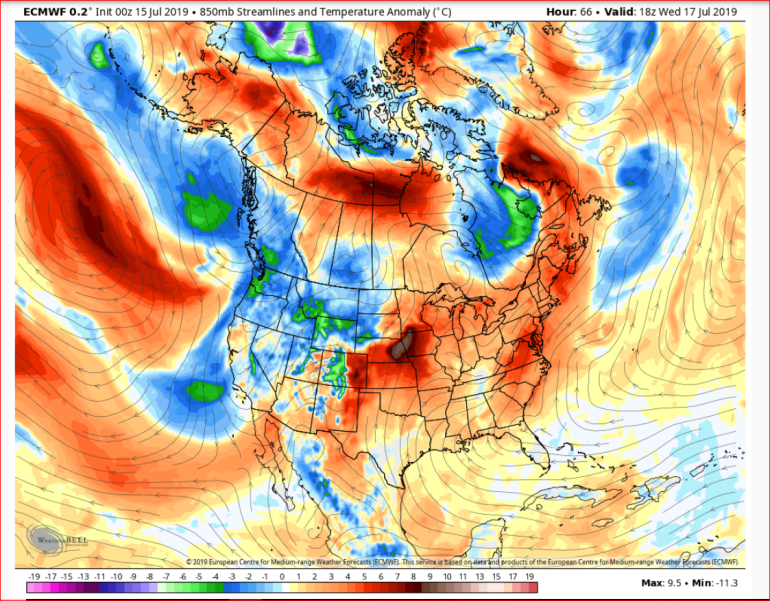 Reds are hotter and the blues are cooler.

As a matter of fact for the period from Wednesday afternoon through next Monday…well you get an idea. 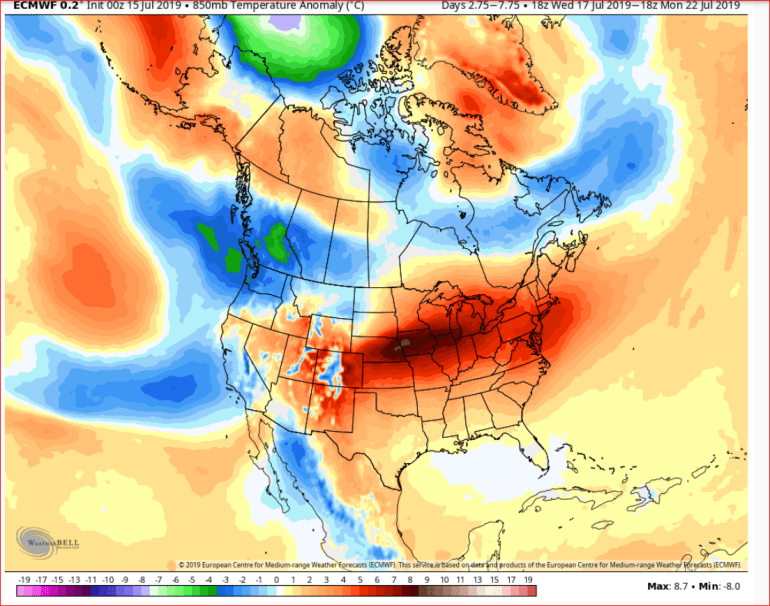 and it probably will go on longer than that.

The EURO surface temperature forecasts are running too hot…it’s been a bias this summer I’ve noticed in hot weather scenarios. The new GFS model is the opposite…there is a known bias for being too cool.

So IF you sort of split them…you get a number of days coming in that 95-100° range…and that seems pretty reasonable to me.

There can be wrinkles though…convection up north can through some clouds our way filtering out the sunshine for a day or so unexpectedly…we’ll just watch that day by day.

The bottom line is that heat is going to build in and it’s going to get hotter and hotter compared to what we’ve seen this summer.

This would be another great chance to mention my latest podcast…concerning the #1 weather killer in the KC area every year.

It was an interesting conversation…especially the part where fans actually make things WORSE than not having a fan.

Expect my colleagues at the NWS to issue some sort of Excessive Heat Advisory this week for multiple days.

The dew points are expected to be 70-75°, perhaps higher in the outlying areas where the corn crop is evapotranspiring moisture right now. That means the corn is actually sending moisture into the lower part of the atmosphere and this sends dew points up even higher in the afternoon and early evening. This will send the heat index up even higher as well. So that will be closer to 110° in the outlying areas…and closer to 105° in the Metro areas.

As you might imagine…blogs will be hit or miss this week. No blog tomorrow…another one though on Wednesday as the heat starts in earnest. 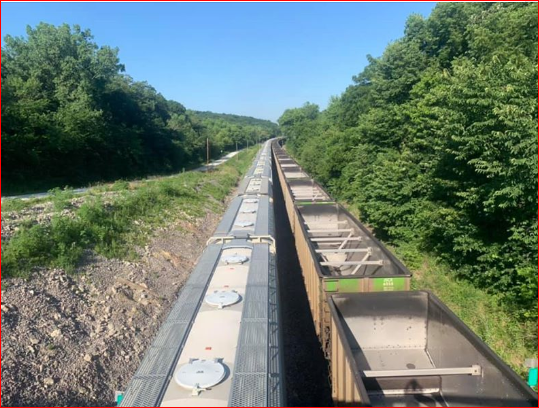