Good morning…as expected a wet start to the back half of the weekend with rain, some of it heavy, falling overnight. There is still some rain out there too…which will gradually fade as the late morning progresses. The moisture that fell locally, not a lot, 1/4-1/2″ for the Metro will turn into steam heat this week. From tomorrow through Thursday highs should be near 90° with correspondingly high heat index values closer to 100° on some of those afternoons.

Of note as well will be some scattered showers and gustier winds too, especially Monday and perhaps Wednesday as well. Overall a breezy and hot flow of air will continue into Thursday before a seasonably strong front brings rain/storms and cooler weather for Friday.

Today: Rain fades towards lunch on the south side…then variable clouds and mild with highs 80-85 in the Metro and near 70° well north of KC. Areas well south of KC will see highs 85-90°.

Tonight: Partly cloudy and mild with lows closer to 70°. Muggy as well.

Monday: Partly cloudy with perhaps a few showers later in the afternoon. Highs well into the 80s to near 90°. Windy as well with gusts to 30 MPH possible

Tuesday: Muggy with highs near 90°. Winds gusting to 25 MPH

So far this year we’ve only had 22 days with highs 90° or above…the average is 41 for a whole year. Needless to say we won’t get there but we could add another 1-2 this week…the average last 90° is September 15th (since 1900) so this isn’t really unusual for the area.

We’ll see how the slowly decreasing daylight, the incredible “greeness” that is out there after all the summer moisture and slowly fading sun angle plays a role in all this.

Dew points will be pretty high for a few days…and that will definitely be felt through the region.

On the subject of fading daylight…yup it’s a thing and I’m really noticing it now in the evening at least. We’re losing 1-3 minutes per day right now…and obviously that goes all the way through the 1st day of winter. 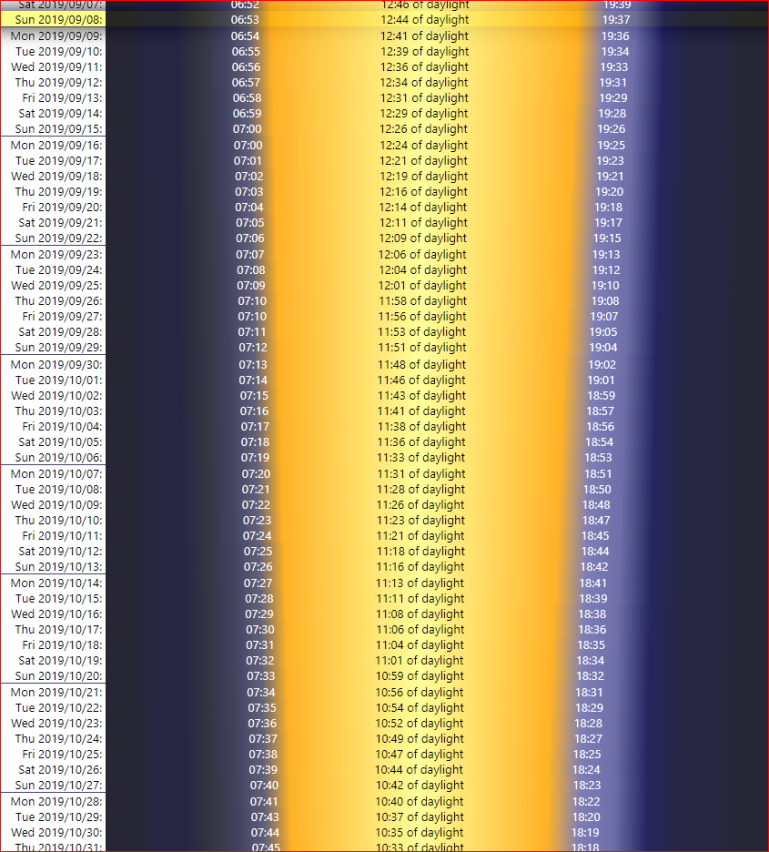 As a matter of fact between today and Halloween…we lose about 2 hours and 10 minutes of daylight.

We also have a ton of moisture out there. There was 1-2+ inches of rain overnight across northern MO…per doppler estimates. 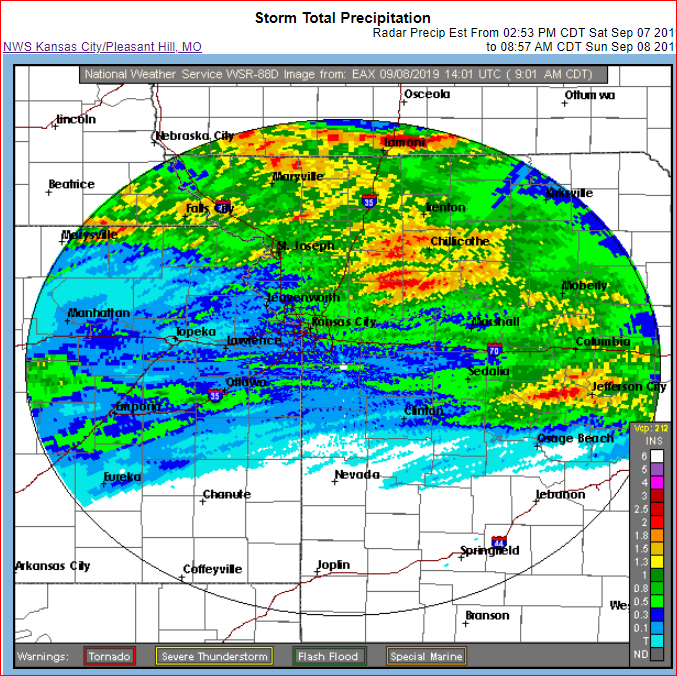 The anomalies (compared to average expressed in %) through yesterday morning are impressive…here and elsewhere. 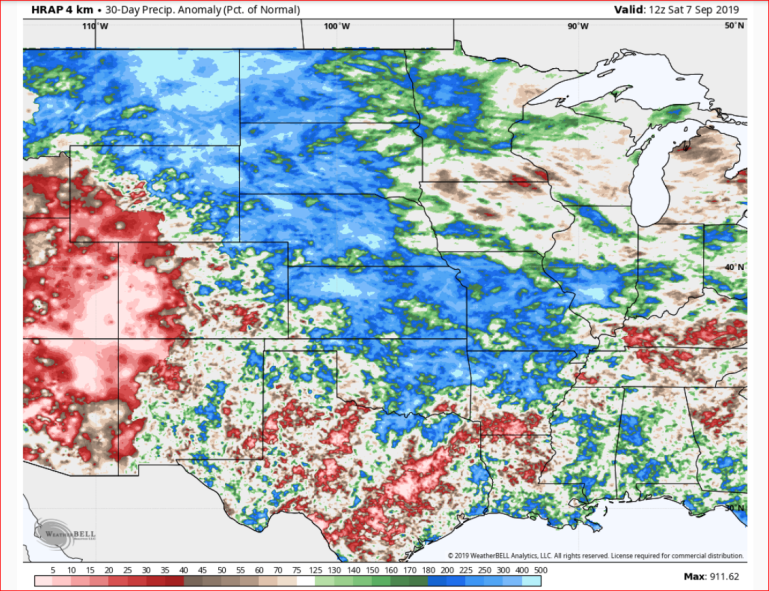 The MO River basin has really had a lot of moisture especially. Take a broader look over the past 6 months…these are precipitation totals. 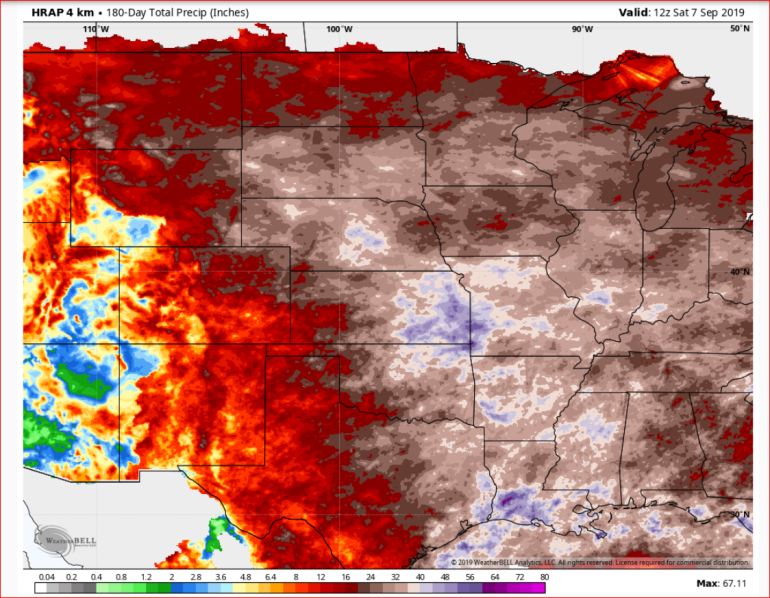 and when you look at the year…there are the % anomalies. 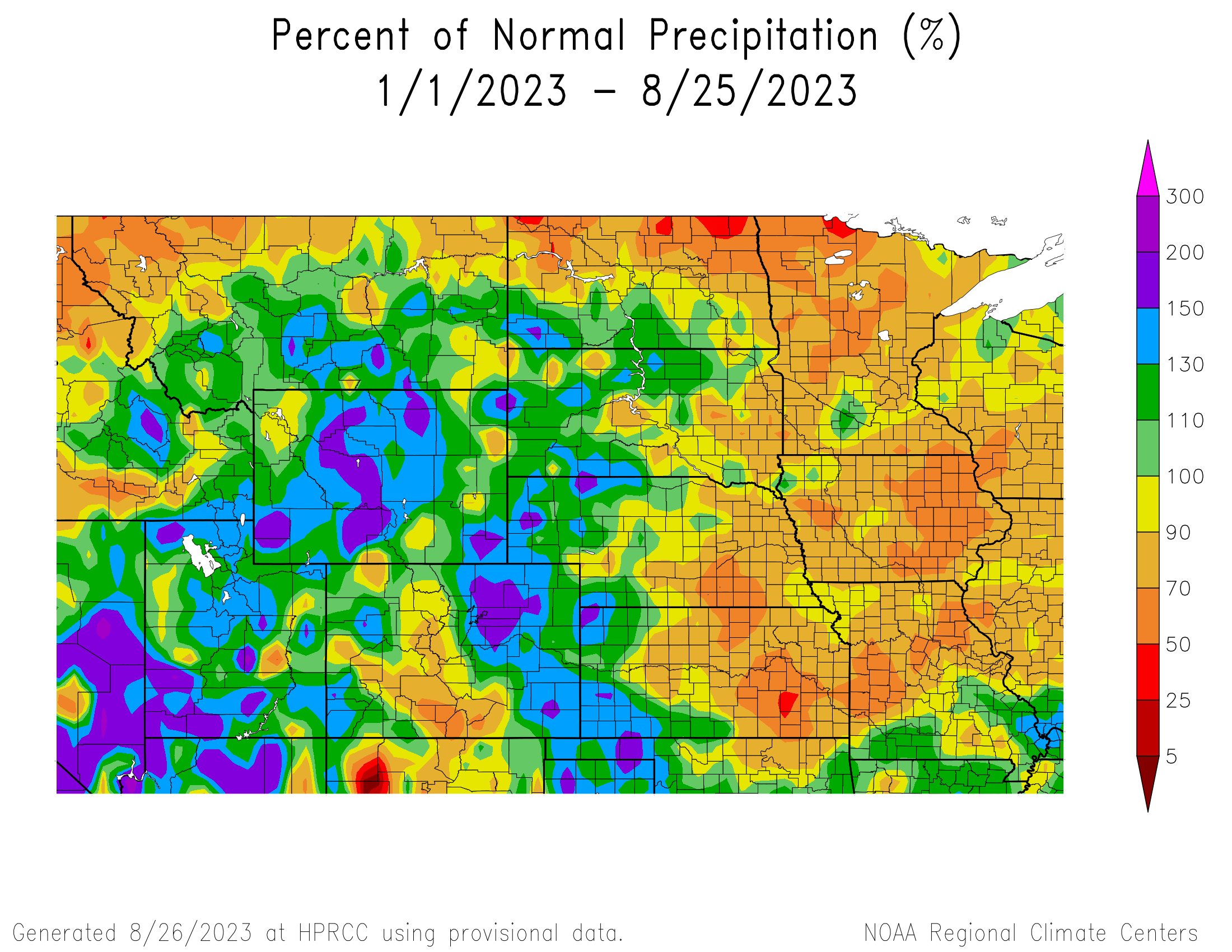 So much moisture…rain and snow together.

Its no wonder that there isn’t any real drought in this region or north for that matter. To be fair though there is this weird area in eastern IA and western IL that has had some moisture issues for a few months.

Of note above is the situation down towards TX which is expanding and has been for a couple of months now.

Meanwhile a couple of wrap up tweets/data from Dorian…which hit the Nova Scotia area hard as well…especially around the Halifax area.

And so many lives forever changed. pic.twitter.com/QXeOo09fMy

6 days of Hurricane Dorian as seen from radar.

From category 5 hurricane ➡️ stalling over the Bahamas for almost 2 days ➡️ more than doubling in size ➡️ making landfall in North Carolina ➡️ transitioning to a powerful post-tropical cyclone over Canada. pic.twitter.com/gaMOuVpFU4

Then there was this as well…from this morning.

A buoy moored off the coast of Newfoundland measured a maximum wave height of 30.7 m, or 100.7 feet yesterday in #Dorian. If verified, that matches the highest wave recorded during the Perfect Storm in October 1991! https://t.co/lYdPqlB60E pic.twitter.com/6OpsspcK3x

Back home into KC…the next cold front will pull through on Thursday…timing appears to be favorable for good heating on Thursday with the front coming into enough instability to set of storms/more rain. There may be a chance of severe weather as well…winds/hail the main threats later Thursday it appears.

Then we’ll cool off for about a day or two before warming back up next weekend. Trends through mid-month+ favor above average temperatures mostly.

This month will probably go down as a milder than average month overall when things are all said and done.

Our feature photo comes from Lesa Wardrip up in Parkville. 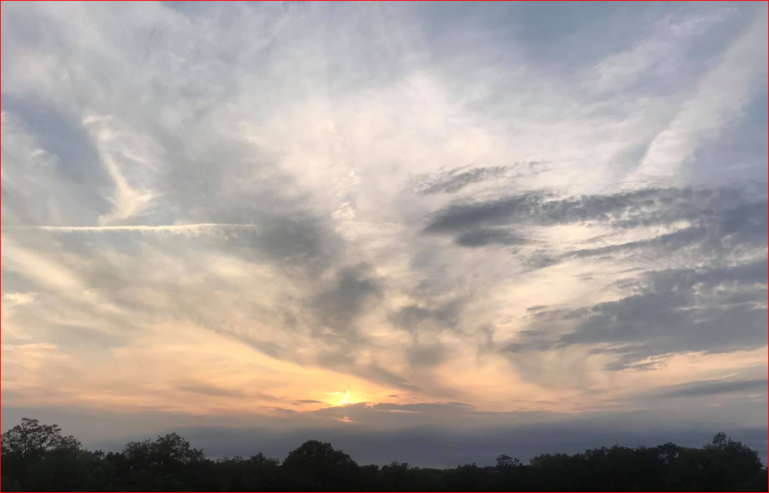