Happy Friday…I’m going to be taking some time off for the next couple of weeks or so…blogs resume around the 14-16th or so depending on the weather situation…I might cobble a quick blog together on Monday the 7th though for you.

With that said I’m pleased to release my newest podcast to you. I had a chance to sit down and visit with Joel Nichols, for many years with Channel 9 and a few years with Channel 41. He’s a fun guy and I was thrilled to talk to him. Not surprisingly we had a lengthy conversation about his past TV life and the path he took to get there and succeed. I ended up creating a two-part podcast…we’ll release the 2nd part when I’m back from vacation.

Here is the link to my podcast page…

It was a great conversation…part two will focus more on his weather career and also what he’s up to now!

Today: Cloudy and cool with scattered sprinkles/showers possible. Highs only around 60°

Tonight: Mostly cloudy with steady to rising daybreak temperatures and readings in the mid 50s

Saturday: Rain with maybe some storms likely from mid morning to early afternoon. Not an all day rain and I’m hopeful we can clear out in the afternoon. Highs may approach 70° with enough sunshine.

Sunday: Partly cloudy and pleasant with highs in the mid 60s

Today is a rather significant day in KC weather history…

How many remember this…

21 years ago on 10/4/1998…the infamous deluge @ArrowheadEvents @Chiefs 3-6" of rain deluge during the game. I was on the phone with the refs/groundscrew making them aware of what was coming and happening. What a mess! #fox4kc JL (h/t @mammatusman) pic.twitter.com/6eflCV8V1d

From my colleagues at the NWS…

“During the afternoon and evening of Sunday, October 4th, 1998, two separate rounds of thunderstorms produced unusually high rainfall rates in the Kansas City metropolitan area. The intense rainfall, on top of already saturated soils and in a largely urban environment, quickly resulted in excessive runoff and flash flooding. Flash flooding along Brush Creek, Turkey Creek and Indian Creek resulted in eleven people losing their lives – eight lives alone were claimed as Brush Creek inundated the Prospect Road bridge. Ten of the eleven deaths occurred after sunset and in automobiles, traditionally high risk factors associated with flash floods. In addition to the fatalities in Kansas City, another death attributed to flash flooding was reported in St. Joseph, Missouri. The flash flood received national attention, as millions watched as the deluge swamped a nationally televised football game between the Kansas City Chiefs and Seattle Seahawks. In addition to the flash flooding in Kansas City, reports of hail up to quarter-sized, wind gusts up to 70 miles per hour and high impact river flooding was reported. All toll, damages were estimated at over $50 million.

At the time the flash flood of October 4th, 1998, was the second deadliest flash flood in Kansas City’s history, eclipsed only by the September 11-12, 1977 flash flood that killed 29 people and resulted in over $100 million in property damages that affected the Country Club Plaza.”

This is a radar snapshot from that night…as the storms were pelting parts of the Metro. 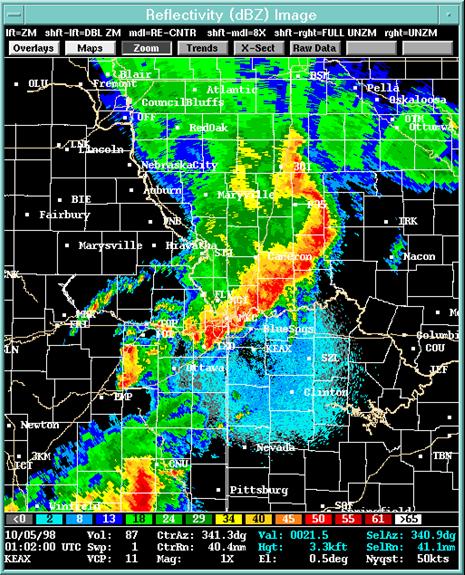 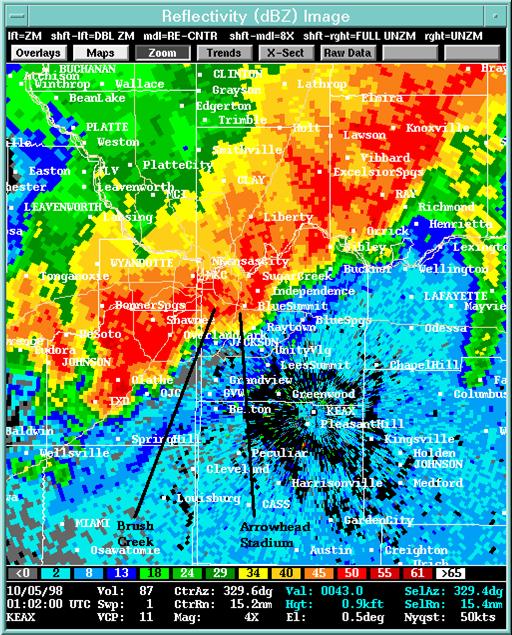 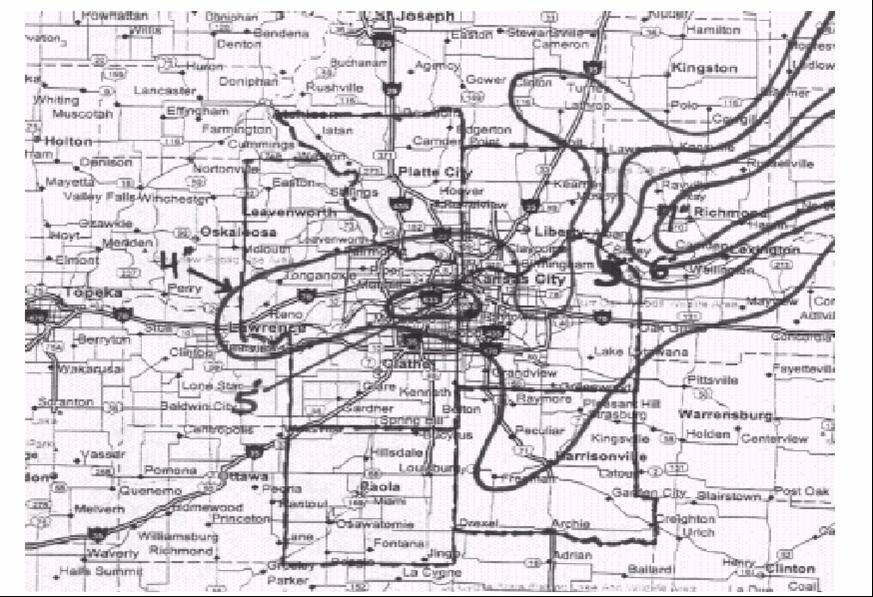 The storm totals from that night show that there were significant parts of the Metro that had very little. 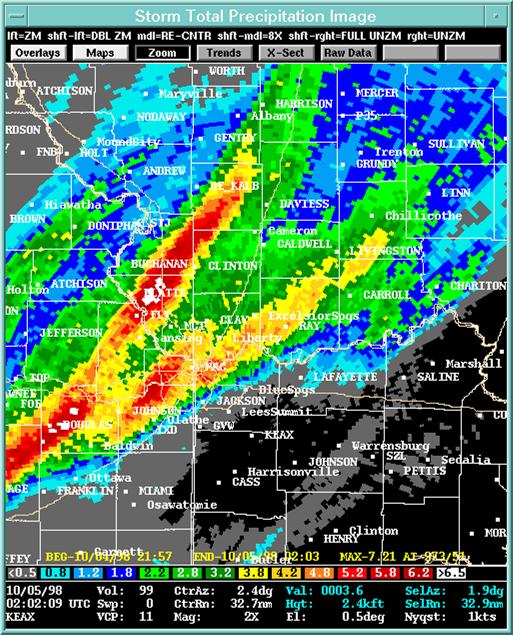 Note the areas in SE JOCO and SE JACO…barely anything. While folks lost their lives in the Plaza area from flooding rains…it barely rained south and east of the I-35 corridor.

I’ll have the team handle the rain chances for tomorrow (the 5th) for you.

I wanted to start and talk about later next week as the model data is giving big signals on a potential significant invasion of much colder air into the Plains…this is has far-ranging implications…especially considering the late crop plantings that occurred because of the flooding/heavy rains from the spring that delayed planting.

Model data for the last few days show a significant storm carving through the northern Rockies into the Upper Midwest. This will likely tap into much colder air from Canada and drive that colder air into the Northern Rockies and then into the Plains.

Now models can be a bit dicey and shouldn’t be taken verbatim for obvious reasons so far out…error rates are very large…especially in seasonal transition times…but they tend to have decent ideas on big picture things from 5-7 days out. The devil is always in the details.

Here is a look at the temperature anomalies up at around 5,000 feet from the ensembles…this is probably (from so far out) the best way of depicting the potential…this map shows Next Thursday afternoon. The anomalies are in °C. This is for 1PM Thursday the 10th 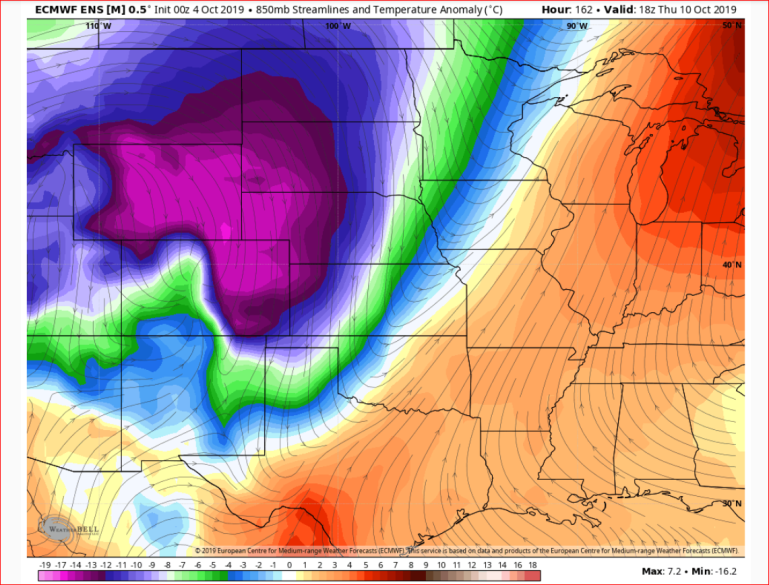 That is a significant shot of cold air diving through the Rockies and into the Plains.

Now fast forward to 7PM on Friday the 11th 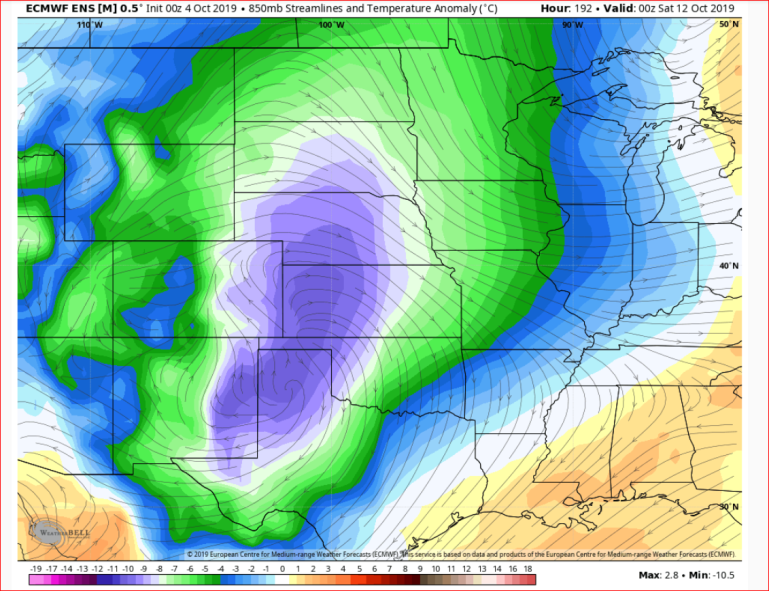 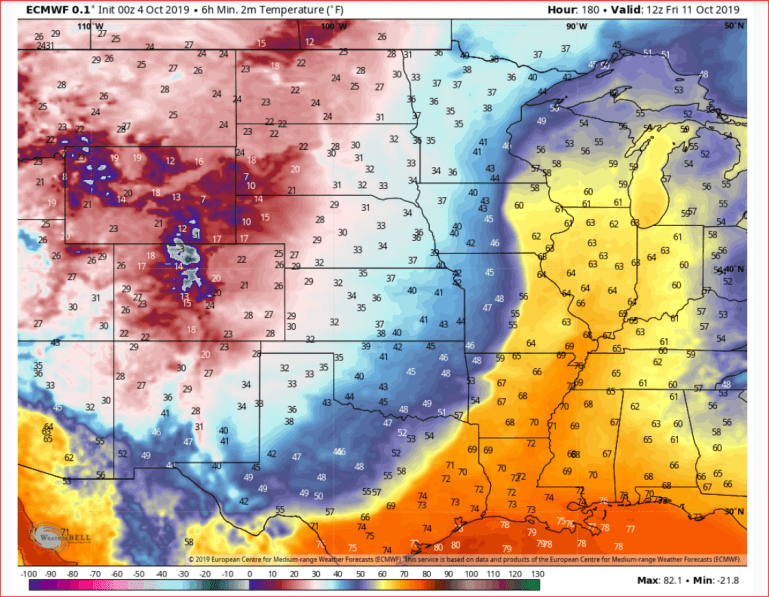 It would be next Saturday AM, depending on the speed of the front…that we could see temperatures tank…and raise the prospect of a frost or a light freeze IF this is close to correct…still a HUGE if. 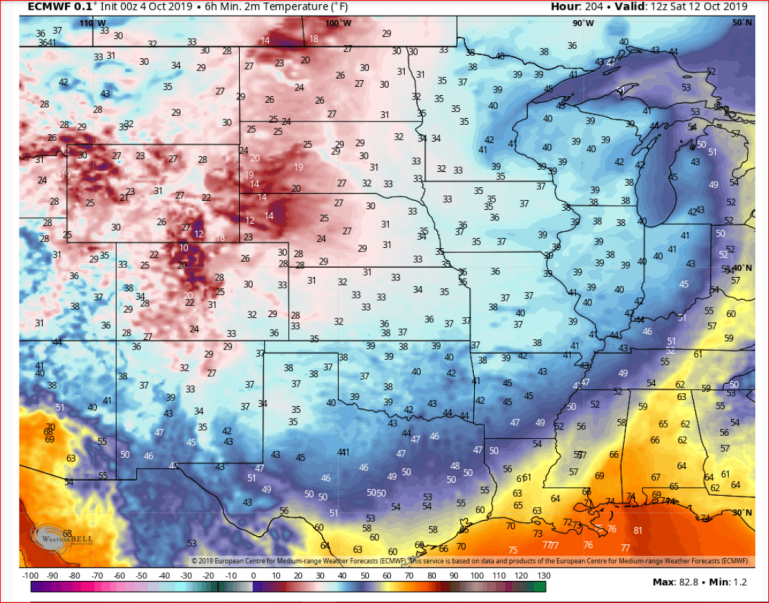 Heck the EURO and the GFS have accumulating snows near and north of the I-80 corridor…later next week.

It’s something to sort of pay attention too I think…especially for farm/agricultural interests. There was so much delayed planting because of the saturated soils in the Spring…and even double plantings…that depending on the location in the Plains could adversely hurt the crops since many are behind schedule and need as much growing time as possible.

IF it wasn’t for all the moisture in the winter/spring…the crops would be matured … but for at least areas north of here…they may not make it in time…the following animation shows our saturated conditions…but also show the developing drought in the SE part of the country.

"Flash drought" appears to be the term of the day. Quick look at monthly soil moisture anomalies in the U.S. Southeast shows quite the change from August to September. Record heat & no precipitation will do that. pic.twitter.com/QjEpb6sL8D

By the way…temperatures there yesterday, as they’ve been for almost a week…are crazy high. Daily/monthly records have been set in many cities in that part of the country. It’s never been hotter so late in the year, with numerous places at or above 100°.

Since Tuesday the number of cities that have seen their hottest October temperature stands at 75 🔥🔥 pic.twitter.com/zqHqy2KR1n

So a lot on the table…over the next 7+ days…there will be some very nice fall weather too…especially early next week…classic fall days as a matter of fact. 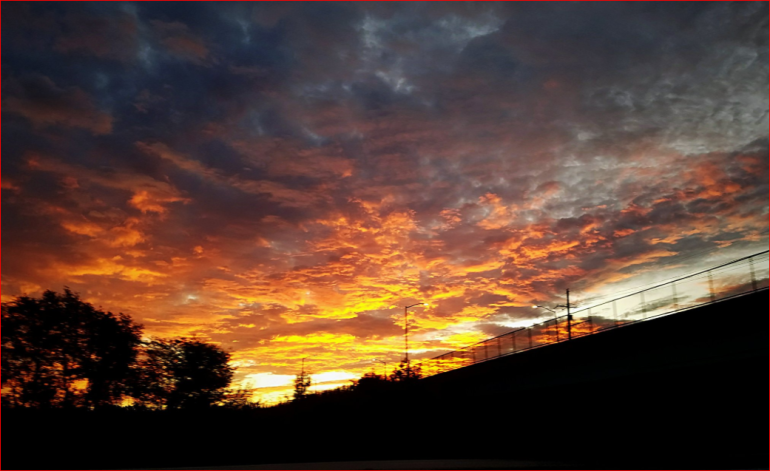 CDC recommends use of cloth face coverings; Trump says he won’t wear one

Joe’s Forecast: Getting better this weekend