So far this month we’ve had 5 clear days…12 partly cloudy days and 12 cloudy days…it’s not been a pretty month for sunshine around these parts. It’s been wet as well with 2.8″ of moisture making this one of the wettest January months in KC weather history. There still might be a couple of rain or snow showers out there tonight and tomorrow but whatever we get shouldn’t add too much to that.

I continue to feel strongly about the big warm-up coming over the weekend…you’ll feel it Saturday and revel in it on Sunday…hopefully Monday too…but this will be replaced by some Canadian air coming into the region later Monday and linger into Thursday of next week. There should be at least some rain>snow transition stuff. Accumulating snows are possible early next week.

Today: Cloudy skies with temperatures in the mid 30s

Tonight: Cloudy…there may be a few patches of sprinkles…drizzle…or flakes from KC northwards. Lows in the upper 20s

Friday: Cloudy…highs in the upper 30s

Saturday: Becoming sunny and milder with highs in 50° range

So things are gradually changing…but boy has it been miserable lately. Somehow we’re still running about 3.5° above average for the month…this is more a function of temperatures at night nit dropping off that much. I think we’ve had 7 days this month with LOW temperatures below average. So despite the lack of warmth during the day…it’s been not as typically cold at night (because of the same reason…clouds).

There is actually a way of looking at this… 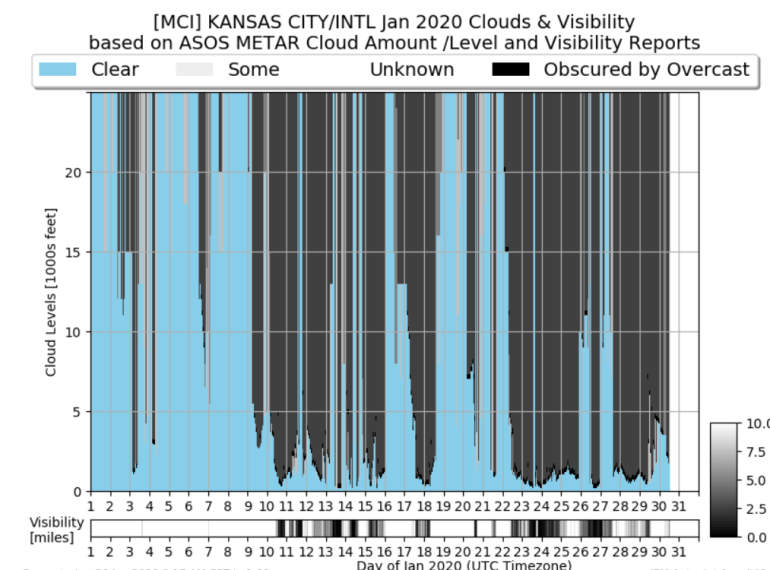 All that gray you see…especially after the 10th represents the coverage of clouds from the ground upwards. The small areas of blue on many days from the 10th on represent the lack of clouds JUST above the surface…but go a few hundred or a thousand feet up and we’re socked in.

There was a decent stretch from the 19th to the 22nd…but it’s not been a pretty run of sky conditions around here.

If you’re wondering how this compares to last January… 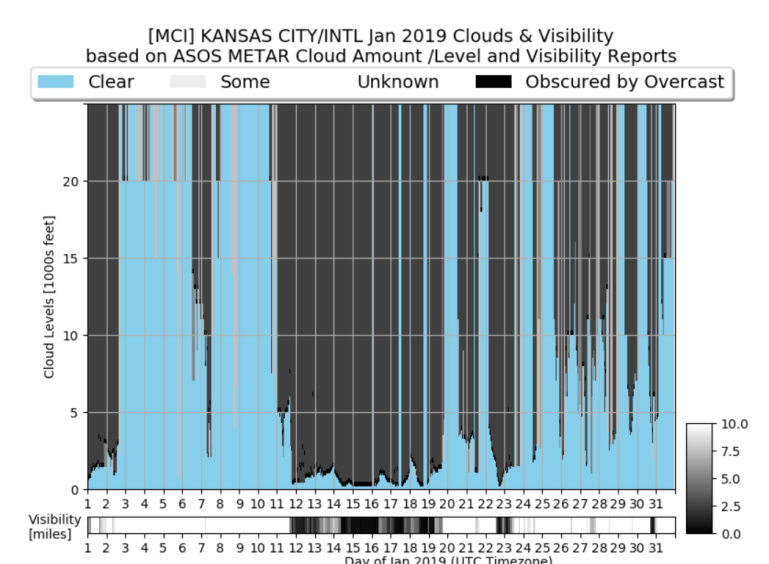 Note the stretch last January from the 11th through the 19th…

There are actually some subtle differences this morning. Overnight there were some breaks in the clouds for parts of the area. As I look outside while I type this…the lowest clouds are gone on the southside although they are persisting on the northside because I see KCI is more or less socked in.

There are a couple of weak waves coming eastbound…one tonight and one tomorrow. There may be a few areas of light precipitation. We’ll need to watch tonight in case we get something liquid and with the cold overnight see some scattered glazing out there.

The warmer air that has been talked about for about a week on my end is still on tap for the weekend. we get a taste of it on Saturday and then hopefully from at least St Joe southwards…we get into it on Sunday.

The way this has to work is 1) we get sunshine on Sunday…2) we have some wind…it doesn’t have to be a lot but at least 10-20 MPH winds…and 3) whatever front is trying to sneak into northern MO has to stay in northern MO and not slide any farther south.

Northern MO into IA will have some cooler weather on Sunday. Part of this has to do with the snow on the ground up there. While overdone…this gives you and idea on the current snowcover.

Up towards Maryville there is still a solid 3-5″ of snow on the ground.

This is important because later Sunday a cold front will be somewhere up there…between the IA border and the NE border. The winds behind the front will be from the north…and blowing over snowpack helping to chill the air to the north of KC.

Meanwhile we’ll be in a VERY mild air mass above us…close to 65° about 2 thousand feet up. There is where the wind is important…up there and here on the ground. The winds up there will be going pretty good…around 35-50 MPH…and all we need is about a 15-20+ wind here at the surface to stir the air enough to mix this downwards…and I think that should happen. The potential is for highs to be in the 70s…but I don’t want to push that button right now…

Doable…again with that right combination.

That front will mark a bigger change in the weather at some point on Monday. The data is a bit conflicted on the timing of the front moving through KC. Some data holds it off till after later in the day…that means Monday will be back to around 60° with colder weather Monday night and Tuesday for sure.

As the surface front comes through…colder air at the surface moves south…so Tuesday will be a struggle to get much above 30° in the afternoon at least. There should be moisture overriding the front and a disturbance moving through the Plains on Tuesday. The disturbance will pass towards the NW of KC…at least according to some of the data today…and that means we get something but not a lot..it also means that while I lean towards the snow aspect for the “something” we may get dry slotted to some extent aloft…raising the chance of some light freezing drizzle/rain becoming an issue. Why? because the air about 5,000 feet up may not be cold enough to support snowflakes from KC southwards at least.

Again quite a bit happening there…but the winter weather will return. A snowstorm is possible…north of here…and even towards here IF the disturbance comes farther south…we’re talking about 150-250 miles farther south…maybe a bit less than that. 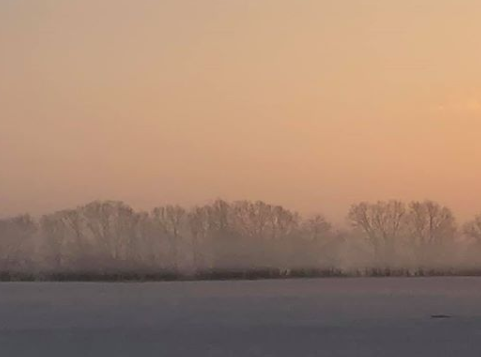 Delta bans 100 passengers, adding them to ‘no-fly’ list for refusing to wear masks