This is the time of the year when you can go from A/C to furnace then back to A/C in the course of a day or so…yesterday was a case in point. Had a chance to go up to the Parkville Brewfest…great time and so much wind! It was warm then it was cold and it was always windy. Gusts were at least 40 MPH and maybe more. Some sort of range fire got started and spread out of control towards the west of the event. It took some time before it was put out. The temperatures went from the warm 70s to a colder 60° with wind making it feel chillier. No clouds to clouds…all because of a storm that cranked out record April snows across parts of the Midwest and for us…just generated a lot of wind after some brief morning showers.

Today we’re in the cold air. Temperatures this morning are in the 40° range with a lot of clouds. We dropped to 38° this morning…the record was 33°. Let’s see how warm we can get today…cold east winds and clouds are never a good combination with the chilly air mass that moved into the area yesterday.

Today: Variable clouds with some AM showers with highs in the 50s. There may be some showers later this afternoon and a better chance of showers/storms tonight.

Monday: Rain ends in the AM then variable clouds. IF we get some sunshine in the afternoon we may be into the 60s

Tuesday: More rain (heavy at times) with highs only in the upper 50s to lower 60s.

Wednesday: Best rain chances may be in the AM with highs around 60° or so.

Multiple rain chances are coming towards the region…and it all starts later tonight especially. This has been well forecast for over a week at now and here we go.

There are issues. 1) repeated rounds of rain at some point mean flooding. Now the issue is where do those rains focus? As an early shot across the bow the NWS in Topeka has issued a Flash Flood Watch for areas of eastern KS. The counties highlighted in darker green are affected. This does not (as of this writing) include the KC Metro area 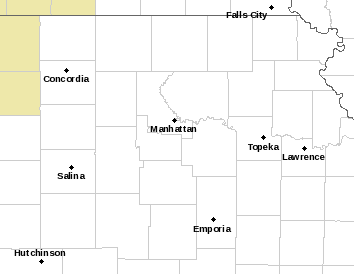 This potential is for overnight mostly.

The set-up has been written about for days now…a front stalling towards the south of KC. The same front that came through yesterday with such windy fanfare. 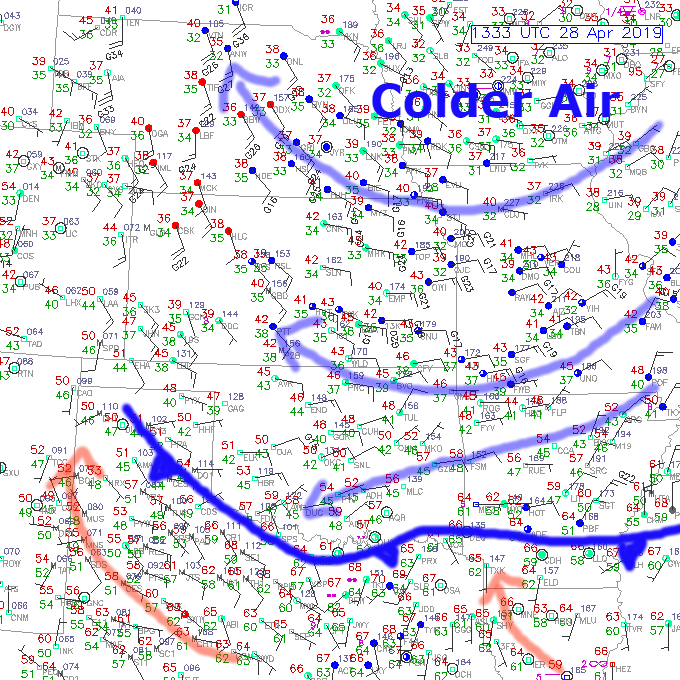 The surface front is probably about done moving southwards and will gradually come northwards over the next few days. Later today and tonight the winds will be blowing at around 60 MPH above the front. That is strong “overrunning” and that is a lot of lift that should be generated to trigger developing rain/storms in the region somewhere. The map below shows these strong winds at the 850 mb level or around 5,000 feet or so…they’re cranking! 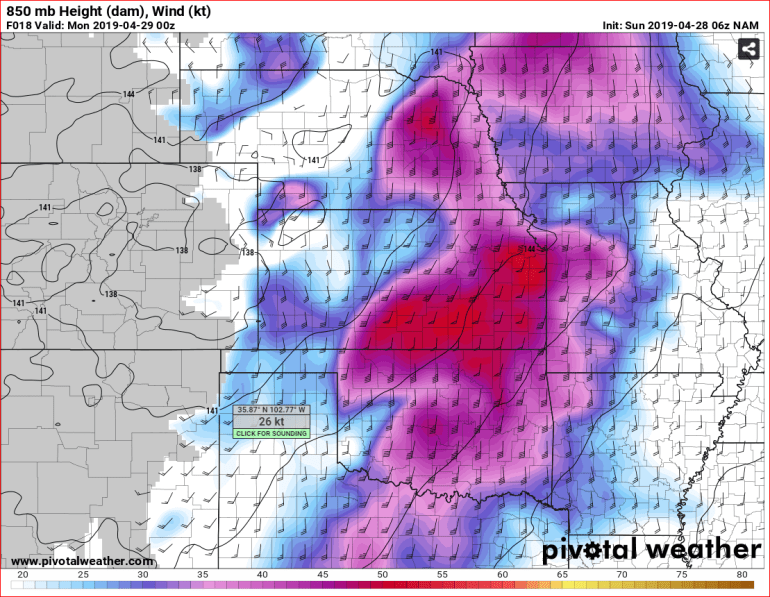 That’s got to create rain…now the issue is where really. We should get something from this…and it’s not out of the question given all the lift that there could be some small hail around with whatever forms overnight.

Some locally heavy rains are possible, especially towards and north of I-70…again this may be more on the KS side but it’s worth paying attention too.

This sort of primes the pump if you will…this will get the surface front to move northwards setting the stage for other rounds of storms/rain coming Tuesday into Wednesday it appears.

By then the atmosphere will be swollen with moisture…we can see that by looking at the Precipitable Water product (PW) that the models generate for us. This shows the amount of moisture through the the bulk of the atmosphere and when I see eye popping values of more than 2 x’s average…it gets my attention! 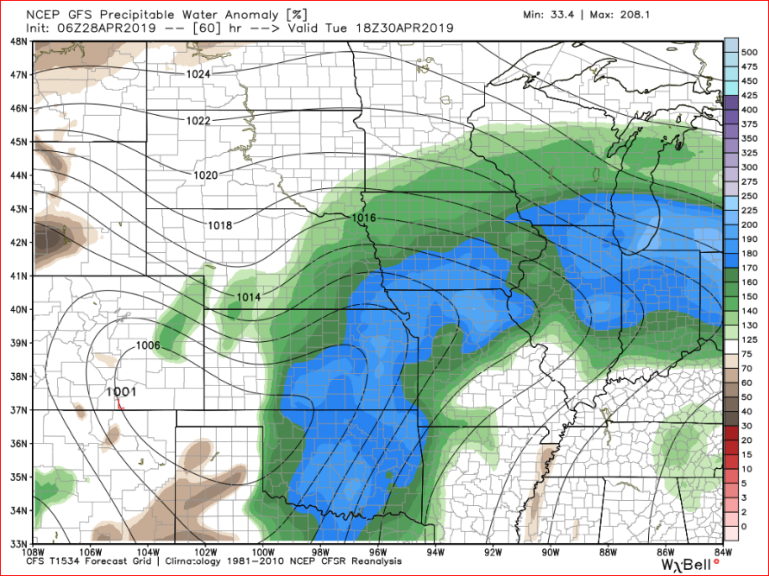 What this tells me is that what forms will have a TON of moisture to tap into…and notice the way the arc of the highest moisture content in the atmosphere is situated…from the eastern parts of KS/OK northwards…that would be co-located with the frontal position and the movement of the storms as well (for the most part)…that too is a signal for locally heavy rains.

The overnight data has thrown a wrinkle into Tuesday and brings the front even farther northwards…this is important because that would be a signal, depending on how the day evolves for severe weather somewhere IF we can tap instability which could be a big issue depending on the rain situation that will be ongoing. Let’s put that on the backburner though for another 24 hours.

The EURO model brings wave after wave of rain through the region all the way into Thursday with noticeable breaks during the afternoon hours (except for may Tuesday). The GFS is drier Wednesday. Regardless all data continues to point to the potential for 5+” of rain for parts of the area with widespread 2-6″ likely for a good part of the region.

The GFS forecast for rain into Friday AM… 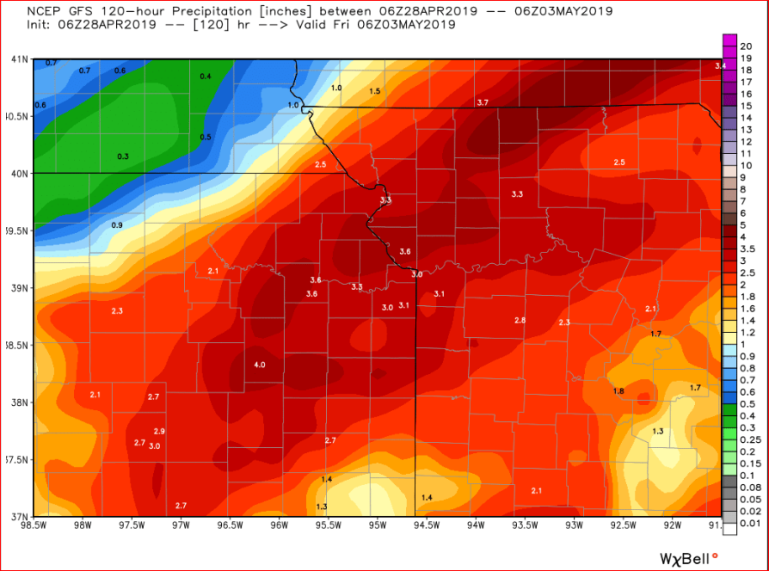 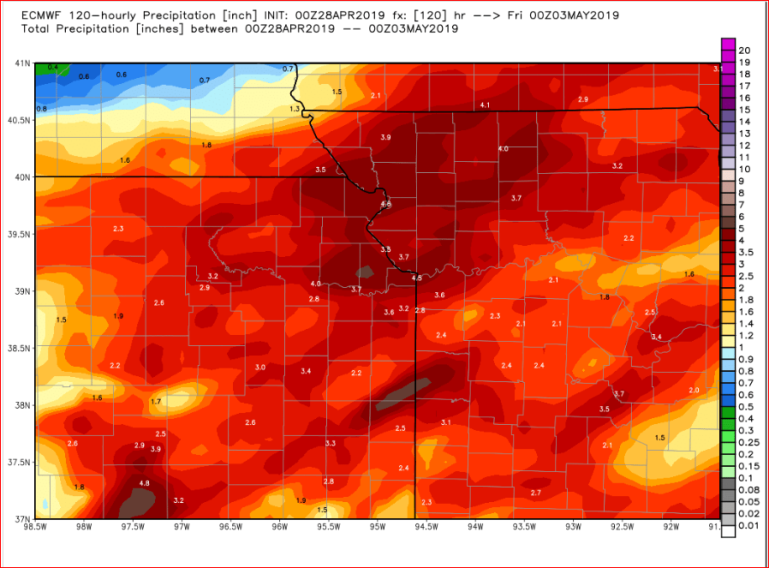 Some will get less…others more…but the set-up is certainly there and that’s why I’ve been so proactive talking about this since early last week.

As far as the severe weather issue goes for Tuesday…again something to monitor BUT the only way it happens is with a farther north stationary front and some instability developing. The data overnight did bring the front farther north and also warmed us up on Tuesday…we’ll see about that aspect.

It’s going to be a busy week. Hopefully this all moves out in time for School Day perfection but I have my concerns right now that we may be on the edge of something ending as the show gets closer. These things usually work out for us in the end though…

Allen Hickman with the feature photo for today…concerns the morel mushroom season that we’re in right now. Karli is doing a story on this tomorrow night. 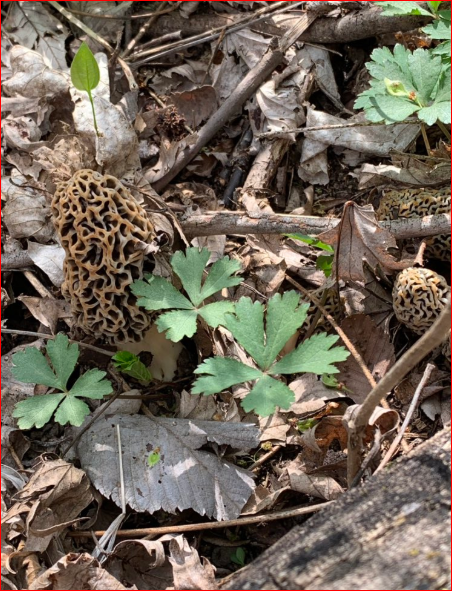