Another mess of a storm out there…actually the 1st part of a 3 day system that may, in the end, give us more snow. For the time being though this is a wintry mix of flakes and sleet mostly with some rain drops mixed in this morning. That has again created slick conditions on the roads and the number of accidents out there are increasing as I type this blog at 8:30 this morning.

We saw temperatures last night pop into the mid>upper 30s…then when the precip began temperatures dropped off…supporting snow…but we’re right now waffling around 32-34°…not only here but just above us as well so we’re seeing this mix become something of an issue out there too.

A Winter Weather Advisory is in effect for the region as a whole through early this evening.

Today: Snow/sleet mix…then perhaps some rain drops later today. Temperatures steady in the mid 30s. Accumulations not much more than what is out there by 10AM or so.

Tomorrow: Light rain, perhaps some snowflakes mixed in…mid 30s…although we may well see a conversion back over to snow heading into the night and early Friday.

Friday: Snow potential in the morning…then we should just be more cloudy in the afternoon. Highs near 32°

Another messy system for sure.

Let’s start with radar…the heaviest of whatever is falling out there will be this morning it appears at this point.

That mess above is a wintry mix…some rain…and some snow.

Temperatures have thrown us a curve or two overnight and this morning.

We actually warmed up to 37° at KCI before the precip moved into the area. 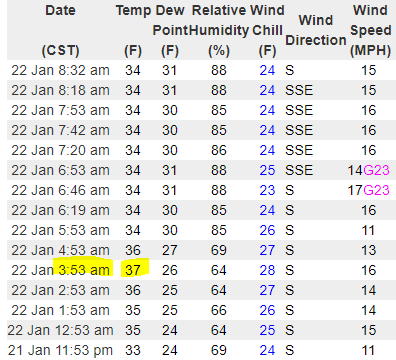 Then when things started…temperatures fell a few degrees.

The morning balloon launch from Topeka shows roughly a 2,000 foot depth of near 32° or 33° air over the area. Now this is towards Topeka and it’s an assumption to make that it’s the same on top of KC right this second…but it’s the best data I have at this point.

That won’t cut it for consistent snow production…and that is what radar shows this morning…a lot of sleet with some embedded areas of snow as well.

Data today shows that this warmer layer above us will increase even more later today and tonight so that what falls by then may mostly be rain overnight into Thursday for awhile at least.

That thing will drop into towards SE KS tomorrow evening and then spin through MO…Friday morning. There should be a developing area of snow wrapping into the system that may well affect KC Thursday night into Friday morning. This could bring accumulations into the area once again…perhaps up to 2″ in spots and there is some upside to this IF we get precisely in the right spot so that snow wraps into the area. We’ll see about all this though…as I mentioned yesterday this whole system is a weird one. The EURO is really bullish with this proposition…the new NAM has something going but I’m still not convinced right now that this will set up precisely where the data shows it will set up.

The issue is IF this output…close to 1/4-1/2″ of liquid…when converted to snow…is some healthy snow amounts. Like over 4″ healthy snow totals…with some approaching over 8″ off towards the east of the KC Metro. 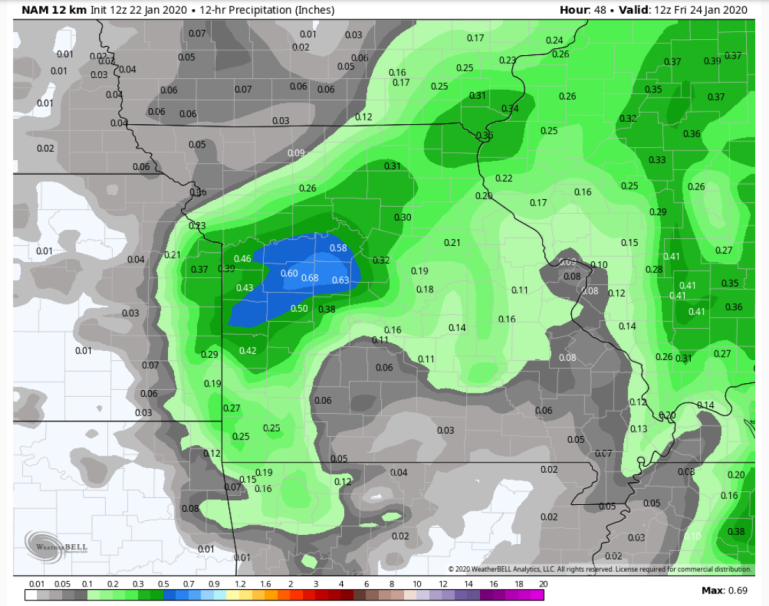 Again I just don’t have a lot of confidence in this outcome right now. I see the reason for what the model is doing…with the colder air coming into the upper level system…and at 1st glance it’s not a bad overall track of the system…but I’m concerned that the progressive nature of the upper level system may contribute to lower totals than what you see above…cutting potential snow totals in the area.

Again for the 3rd time…lower confidence in this outcome on my end at least.

A mix of clouds and sunshine is expected over the weekend with moderating temperatures into the 30s and 40s assuming there isn’t a lot of snow on the ground by Sunday…IF there is more snow on the ground…it will be a struggle and as we’ve seen this season with melting snow likely comes lower clouds that the model isn’t picking up on at this point.

Our feature photo comes from ‎Martha Chavez‎  from the ice last week. 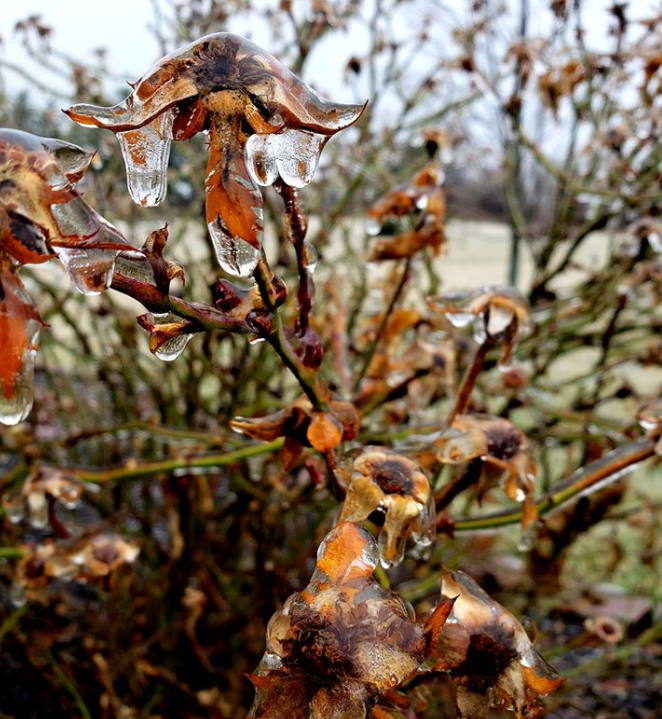 That’s it for today…just a hot mess and for a winter weather enthusiast…not too appealing today. We’ll see what happens on Thursday night into Friday