It’s a muggy start to the work week around the area today. Lots of low clouds that should break up as the day moves along. There have been a few scattered showers out there as well. Today will be a bit cooler than yesterday, but still sort of humid out there as well. Overall the pattern is one where we have additional rain chances coming…no prolonged stretch of totally dry weather is ahead this week although there will be a day or two where it should remain dry.

Today: Variable clouds and mild with highs around 82-85° or so. There may be a few isolated pop ups this afternoon

Tonight: Should be OK with clearing skies and lows back into the 60s

Tuesday: A bit warmer with highs into the 80s

Wednesday: Better rain chances I think, especially early in the day and highs back into the 80° range

The week overall will not be boring…just sort of OK. It will be pretty muggy…but not overly so. It won’t be dry…but there will be plenty of dry times…and really the best chance of rain appears to come later Tuesday night into Wednesday. After that the chances get a bit more murky heading into the end of the week.

We’re also progressively getting more and more into the time of the time of the year where we’ll be watching for various thunderstorm complexes and what happens to those complexes that develop. For example yesterday.

I was playing golf in the afternoon and noticed some of the storms bubbling up in the region. I checked radar and saw an impressive outflow boundary from the storms that were south of us…pushing northwards…and sure enough the winds increased from the south…gusted to about 25 MPH…the dew points, which had dropped into the upper 50s in Olathe…popped to the mid 60s in one hour with the rain cooled air moving northwards and the temperature dropped about 10 degrees…all at around 3PM or so.

These outflows can create new storms which then can create new outflows…and the beat goes on. So things get a bit complicated when it comes to storm forecasting sometimes. The other thing we watch is for disturbances coming across the Plains and that will be the case later tomorrow into Wednesday.

Before we get to that…I wanted to update you on the River flooding situation…things are improving slowly but surely. 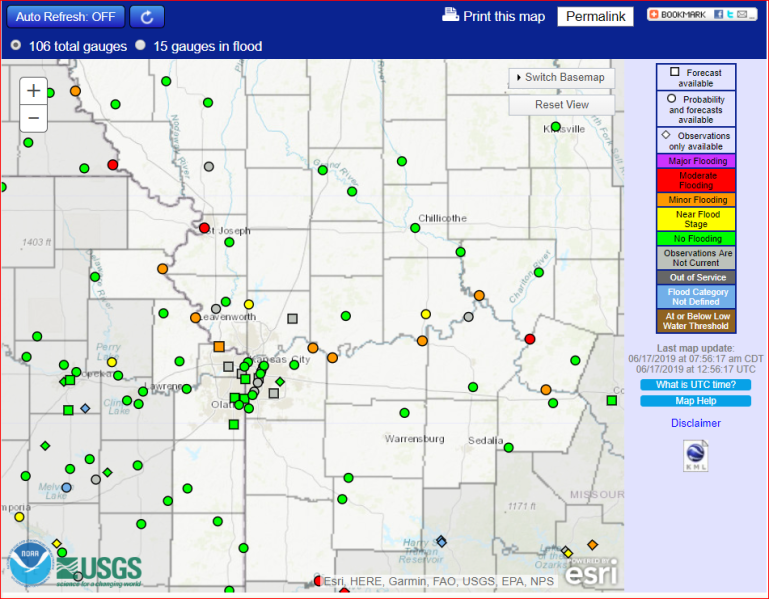 Still some moderate flooding areas out there…along the MO River towards the north of KC…but the River levels have some down for now across the area east of KC. So some progress is being made on that front.

The situation later tomorrow will be figured out more as we see the storms develop tomorrow in the Plains. A pronounced wave will be moving through the Plains…and move east of the area Wednesday afternoon. Tough to see how we don’t get rain from this. The atmosphere will be getting juicier and juicier as the day moves along Tuesday so the storms, assuming they get going…will have a lot of moisture to work with as they come towards the State Line region. That means they should be efficient rain producers…and that means the potential for more heavy rains in some of the area again later tomorrow into Wednesday AM.

Not worth the dive into the specific maps on the totals though…as I mentioned in previous blogs these type of scenarios are renown for sort of having minds of their own really. Will KC be the target for the heaviest rains…will the heaviest rains slide towards the west of the region? Tough to say at this point…but the disturbance that will be created later today from storms in eastern CO looks rather impressive on the model data and with the moisture in the atmosphere in place…you can see how some areas can easily pick up 1-3″ of rain…but not all areas. Model data is sort of all over the place. Anywhere from 1/4″ to over 2″ in parts of the region.

We should be a bit drier I think Wednesday afternoon into Thursday and then additional chances come back into the picture towards the weekend.

On a final note…I’ve been showing the horse race of wettest starts to a year in KC…we’ve gone from #1 back to #3. 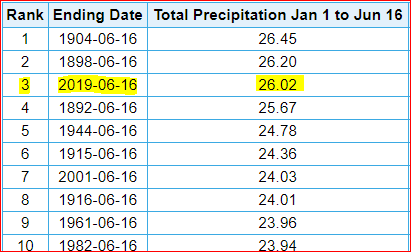 Our feature photo comes from Jeffrey Thompson Jr of some of the great developing clouds on Saturday evening that eventually moved through the KC area around 10PM or so. Thanks to all who sent me so many pictures! 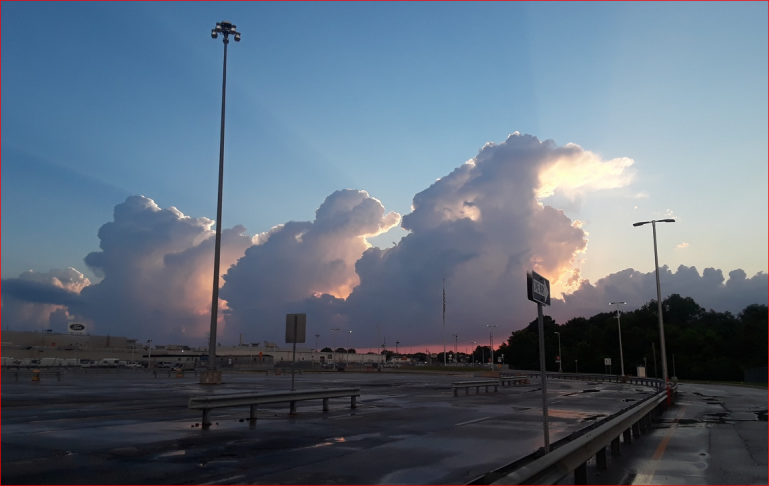 May not be able to get a blog out tomorrow AM…