Well the holiday weekend has come and gone…and at least for the vast majority of the daytime hours it was pretty good overall. So many were able to get out and about and have a little fun in between nighttime rains. Today were starting dry but we won’t finish the day dry. And while we should mostly stay rainfree in the Metro into the afternoon…the humidity will be thick. Model forecasts send the dew points into the 70s which would be a first I think this season locally. I’m curious to see if that really happens. Regardless…remain weather aware today as more storms are likely later this afternoon and into tonight. The storms will likely be severe and that would include the risk for tornadoes.

Tonight: Storm chances are going to be with us into the evening hours and should be winding down towards 12AM or so. All risks of severe weather will be with these storms…including tornadoes. Lows in the 60s

Tomorrow: There is the potential for more storms and rain somewhere in the area depending on what happens tonight into tomorrow AM with the severe weather potential.

Thursday: We should be in better shape overall with drier weather. Highs in the 70s

So far the worst storms are across northern MO…and NE KS. Most hail reports have been under 1 1/4″ but there were somewhat higher hail reports in Brown Co in NE KS.

The warm front is now in the Metro…which continues to be a concern as storms may develop south of that front and then interact, briefly, with the front…that means there could be rotating storms with the front itself. Once the cells go north of the front…larger hail is higher of a concern

Clouds are breaking towards the south of KC and there are breaks in the Metro…so the front may shift slightly northward in the next couple of hours. Instability continues to increase in the area.

The cap will likely weaken in the next 2 hours fully…so crazy things could happen quickly.

Have your tornado plan ready from 5PM>10PM

See you on the news…

There were some interesting trends in the overnight data. One of which was to focus the highest tornado risk towards the north of KC for later today/this evening. There may be some strong tornadoes there as well…with that said that doesn’t remove the KC region from the potential of some tornado warnings…

Another development was the presence of a somewhat stronger cap that may or may not be a factor later today. It may hold just long enough to get through the late afternoon…but odds are this cap will break at some point around the KC area…and that means that whatever forms out west towards eastern KS will be able to get towards the region at some point this evening.

Finally the satellite pictures this morning are showing some sort of weak wave coming up from the southern Plains region which may play a role in firing up at least some scattered convection , especially west of the Metro before lunchtime…how will that affect things? Will there be

Towards northern MO there is a boundary…essentially a warm front really that is lurking north of 36 highway south of the IA border…and there are storms up there already this morning. These storms will re-enforce this boundary today…and should stronger storms develop near that boundary later today…east winds will enhance the low level flow into the storms…and could allow for some stronger tornadoes up there. Something to pay close attention too.

The map above shows the 7AM conditions…notice the changes in northern MO and when you cross over the border into southern IA…it drops into the 50s.

One complication to this is does this boundary drift southwards with repeated areas of rain to it’s north. That will need to be monitored as well as the day moves along because if that happens then the threat of tornadic storms increases a bit farther south.

As I mentioned storms will also fire in eastern KS and that 5% takes that into account. Those storms, if discrete and able to max their abilities could also create some tornadoes as well. They would be moving towards the NE and NNE as the whole area moves eastbound.

That puts the KC area in play but perhaps a bit into the evening hours. The thing about that though…and something worse watching is IF by then there is more of a squall line in play as opposed to individual cells. IF that is the case then we shift gears towards damaging wind potential and also those typically smaller spin-ups like what we saw on Friday night.

So there are a lot of balls that will be juggled today into tonight all because of a storm in the Plains…which needs to get out of the region for us to have more settled weather for more than 24 hours or so.

The morning update from the SPC has placed the areas from KC northwards in a “moderate” risk of severe storms…this is the 4th level on the 5 category scale.

Here is the HRRR model showing the playout…it will auto-update through the day.

I may try and get a blog update out sometime before 4PM or so.

Our feature photo comes from Chip Collins up towards Kearney, MO 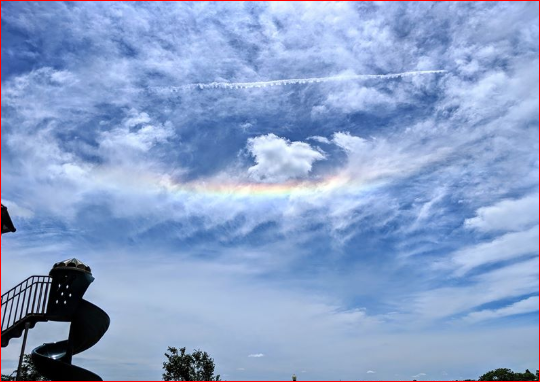 Garry’s Forecast: Back to Summer