Happy Saturday…clouds will be an issue for the area today as we’re sort of in a squeeze play between the disturbance that generated the big thunderstorm complex on Thursday night/Friday AM…and another approaching wave towards the west of the area that is generating a few patches of showers. So enjoy what sunshine you get this morning because odds favor more clouds this afternoon.

The hotter weather returns on Monday and Tuesday ahead of another cold front coming later Tuesday.

Dorian is also giving forecasters headaches as not only has it strengthened quite a bit (expected) but now the track change perhaps may avoid Florida entirely…although Florida will still feel at least some effects…the issue becomes where does Dorian finally come ashore…or will it?

Today: Variable clouds with a chance of a few showers but overall not a bad day. Cool as well with highs in the mid 70s

Tonight: partly cloudy and pleasant with lows in the lower 60s

Monday: Hotter and more humid with highs 85-90° and heat index values well into the 90s

Let’s start with Dorian…which went through a period of rapid intensification yesterday. This wasn’t a surprise as the various things holding back the storms intensification backed off…and the storm really went to town. Winds in the morning yesterday were around 85 MPH…by the end of the night the winds had popped to 135+ mph. The pressure of the storm dropped dramatically and the storm really looked healthy. Winds on the late morning advisory have been upped to 150 MPH

Today the storm is a beast out there…it does look like it might be getting sheared just a bit but it’s maintaining itself nicely for now at least.

The storm is slowing down and this is part of the trick to where it’s going to make it’s turn to the west somewhere down the road.

The latest forecast from the NHC now keeps the center of the storm OFF the coast of FL.

There is still some model data though that brings the center onshore so there are still some ways FL can be directly hit from the storm. 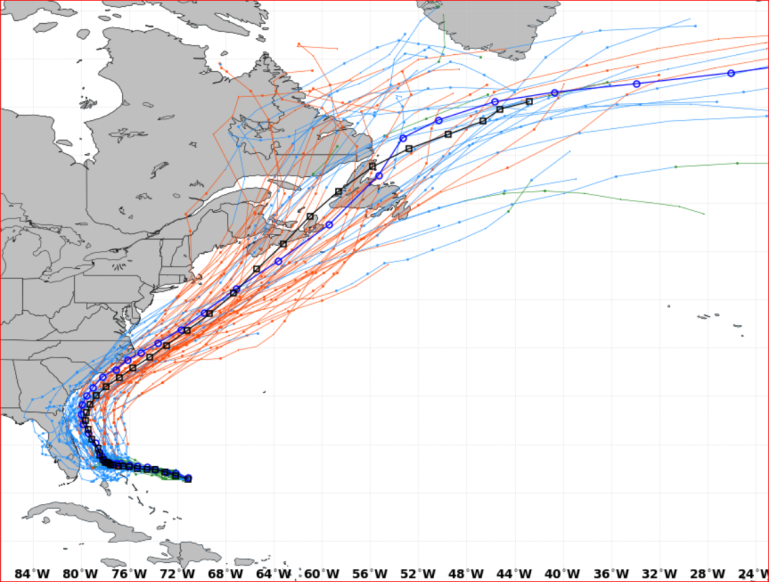 The right turn to the north though will be the biggest issue. When and where that occurs will either spare FL or not.

Dorian may do something similar for the SE coastline based on the data today.

NOAA's HWRF model has a similar solution, with greatest risk of landfall for the coastal Carolinas. Bahamas will see a devastating blow. Even without a direct strike, coastal flooding from Palm Beach to Hilton Head will be significant pic.twitter.com/dh8f5m4dO1

Dorian though will be also going through intensification changes as well. When hurricanes get this intense…there are times that it can’t maintain it’s strength for whatever reason. The eye of the storm starts to collapse in a sense and reform. When this happens the hurricanes inner core weakens somewhat…but the winds around the hurricane in a broader sense start to increase in size. In other words IF the winds 100 miles away from the storm were blowing at 40 MPH…perhaps they increase to 50 or 60 MPH. The storm’s winds actually widen out while the core reorganizes. This process is called an ERC or Eyewall Replacement Cycle. They really can’t be predicted…aren’t understood all that well but in intense hurricanes happen quite frequently. Sometimes IF they happen as a hurricane is coming ashore…can reduce the strongest winds at just the right time of landfall. Again they really can’t be forecast except we know that they happen in these really strong hurricanes.

Recon aircraft are again checking out the storms health as I write this blog…and some data this morning shows the surface winds around the eye may be close to 150 MPH…remember within the eye the winds are dramatically lower. It’s the circulation around the eye of the storm that the winds are at their strongest.

Recon information is critical for this information. You can see the winds the morning flight observes below.

It really is fascinating and this has been done for decades. These days sometimes 2 different recon planes are checking the storms health and the atmosphere around the storm to input that data into computer models with the hope of getting improved forecasts.

Here a look inside the clear eye of #Dorian this morning from the @HRD_AOML_NOAA Hurricane Hunter P-3 Aircraft. Picture credit Paul Chang pic.twitter.com/Yyi8OBRcBf

So about the track change…

The reason is that the blocking high to the north of the storm that I pointed out in yesterday’s blog is perhaps going to be weaker. Another issue is a potential stalling or real slowing of the storm off the coast of FL…

As I mentioned yesterday this could weaken the storm somewhat as the Ocean waters (even though they are like bath water out there) constantly get churned over by the strong winds of the hurricane…again something that can’t be predicted well but has happened in the past. IF this happens it would occur sometime Monday/Tuesday before the forward motion of the storm increases…assuming it’s heading off the east coast of FL.

As far as out weather goes…we’ll keep an eye on radar in case there are a few showers this afternoon.

and the satellite loop will help with the cloud cover…

We’ll get hotter MON>TUE and the dew points will be up there so summer still has some pop in it. Then we get a break again (still warm though) after that with lower humidity.

Today btw is the last day of meteorological summer. We dropped to a pleasant 59° this morning and the highs today will be about 10° below average so not a bad way to finish the “season”. Astronomical fall starts on Monday the 23rd of September in the early morning.

OK that’sit for today…I should get a blog out in the morning tomorrow but I have golf in mind as well so it may be a shorter blog.

Our feature photo comes from Austin Hamilton‎ up in Iowa. 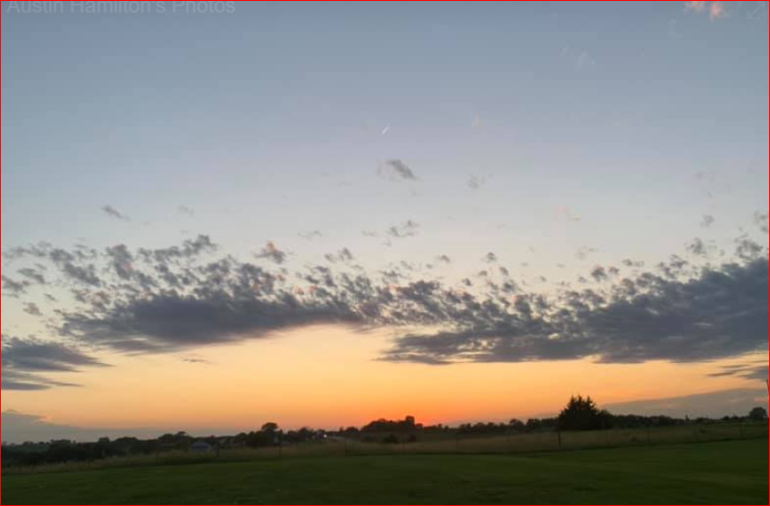 Showers in the Vicinity