While not the brightest start to our Sunday…we should see more sunshine as the day moves along…and while there has been rain…and again some heavy rains overnight…the weekend “daytime” at least has been mostly dry and that means outdoor activities aren’t being totally messed up unless you’re trying to do something that requires dry ground…dry ground is something tough to find right now. More rain is in store over the next few days as rain chances will continue to be around. Another chance comes our way tomorrow AM and then later Tuesday into Tuesday night.

The Tuesday situation will need to be monitored for our next severe weather opportunity but there are already subtle changes in the data that will continue into Tuesday. The timing aspect of this is still sort of questionable and that will play a role in what type of storms we go through.

Today: Variable clouds with more sunshine as the afternoon plays out. Highs near 80°. Muggy.

Tonight: Partly cloudy and mild with lows well into the 60s

Tomorrow: Some morning showers are briefly possible then partly cloudy…warm and humid with highs into the 80s

Tuesday: Partly cloudy with storm chances later in the day especially. Highs well be well into the 80s once again with windy/muggy conditions. Storm risks continue into Tuesday night with the potential of severe storms.

This one was the most “impressive”.

Survey teams have confirmed a third tornado from Friday night (5/24). This tornado was rated EF-0 and occurred just north of the Lafayette and Johnson County border. pic.twitter.com/bh6uXUTDZ2

Here are the other two…

Survey teams have confirmed a second tornado from last night (5/24). This tornado was rated EF-0 and occurred south of Longview Lake. pic.twitter.com/kNxLb7Oqs6

And on a pull back…

As a matter of fact on the broader scale…these are the storms that have been surveyed over the last week. 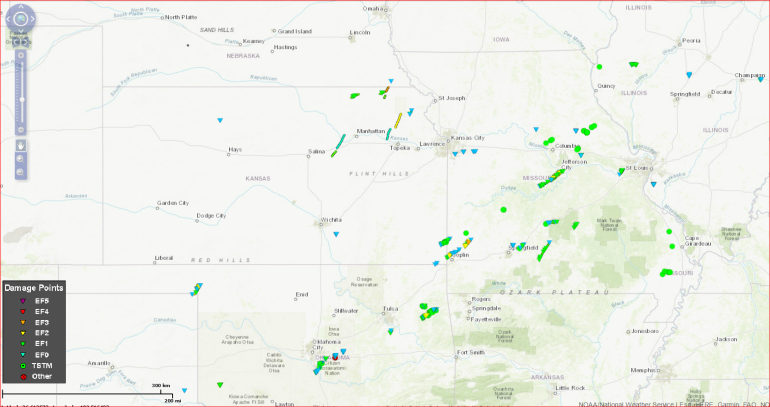 Over the past 10 days, the U.S. has been battered by severe thunderstorms. There has been 1845 total severe reports, with 231 reported tornadoes. Of all severe reports, 8% of them have involved a tornado. pic.twitter.com/O3Wqlfilza

Rarely do they create a lot of damage and sometimes they can’t even be detected fast enough before their gone.

Last night however…El Reno, OK was hit by the same “type” of tornado. Short…quick hitting spin-up…with little warning. This tornado though was different because it was stronger. At least EF2 strength compared to our EF0 ones on Friday night. It may have actually been an EF3 and it was deadly and destructive.

Tragic situation from this type of tornado especially.

Folks in El Reno had about 2-3 minutes of warning, which is NO fault of the NWS. QLCS line tornadoes form VERY quickly, and while damage is significant, this is a rare tornado as most line-tornadoes are weak! @kfor #OKWX pic.twitter.com/ZdB4xOJ2X8

Bad night down there.

Back home there were strong storms on the northside…they sort of fell apart south of I-70 with lighter rains on the south side. 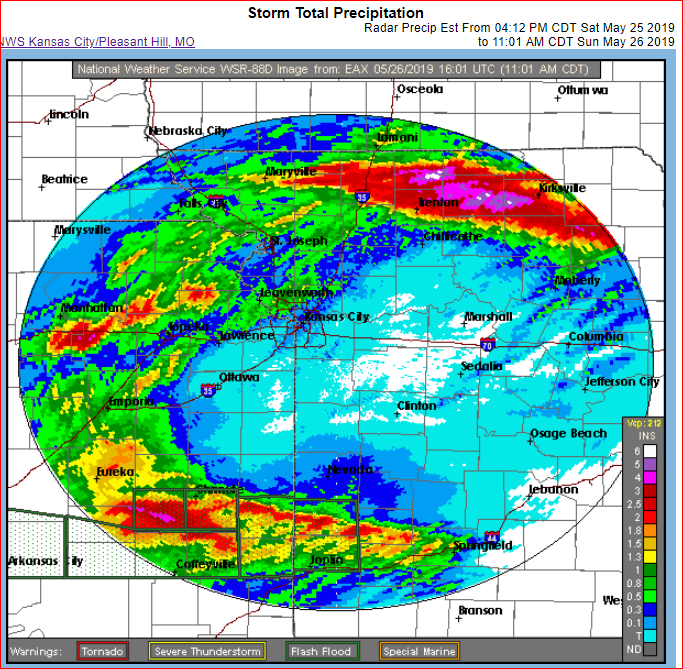 This is now the 2nd wettest May in KC weather history…the record right now is 1995. 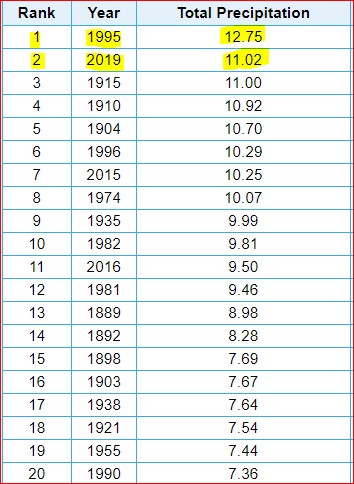 Now to answer the question that you may be asking…that summer…from June>August actually wasn’t that wet in the big scheme of things. We had 12″ that summer…which actually ranked 57th driest out of some 130 summers or so.

As a matter of fact since 3/1 (meteorological spring)…here are the rankings of the wettest 3/1-yesterday periods. 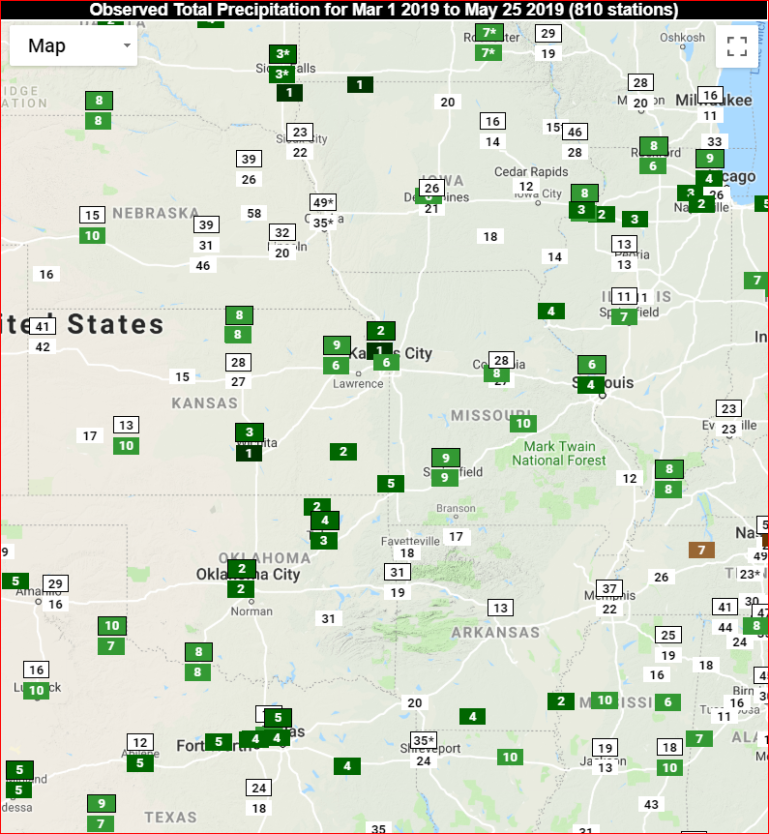 The I-80 corridor hasn’t been as wet by rankings compared to us…but gosh that’s a lot of rain.

Interesting changes already in the data…the Plains dryline will be setting up farther west of KC than the data showed yesterday…3 counties farther west in the morning data according to the NAM. There will be a cap in place for awhile at least into the afternoon…and while there may be some still iffy pre-main show storms during the day before 5PM especially on the KS side (which could be strong with hail as a main threat) I’m not totally sure when the “main show” comes into the area…it might be another night-time type event. The forecast soundings are showing parameters for tornadoes though…and while the directional “shear” in the atmosphere isn’t the strongest…the wind “shear” as you go upwards is pretty decent and in the “so what else is new” department…there will a loaded atmosphere of moisture once again which means the potential for another 1-4″ or rain which combined with all the available instability…means the chance of big storms and heavy rains

The Tuesday system will be the key in whether or not we get that monthly record…”officially” at KCI. I know full well that some of you are closing in on 20″ of rain so far this month as I pointed out yesterday. 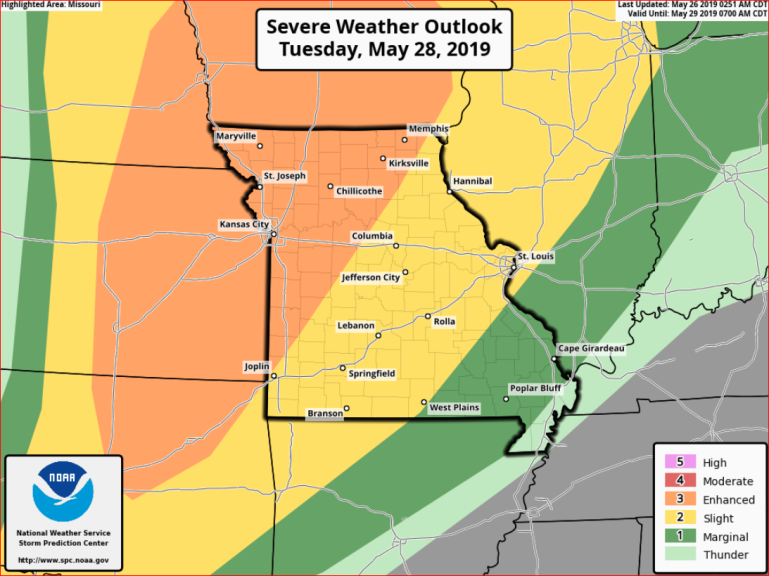 Need to watch the cap though…at least into the afternoon and how long that holds + I’m still searching from something to break the cap aside from the heating…some sort of disturbance coming up from the SSW…which the models may not be seeing yet.

The cap will break I believe in the evening…not sure about the afternoon situation. Of course the later into the evening we go the less likely a tornado becomes as the storms come our way from out west…just speculation on my part.

That’s it for today…another update tomorrow.

Our feature photo is from our own Pat McGonigle of lightning dancing around or own FOX 4 tower. We took several hits the other night…some pretty strong ones too. 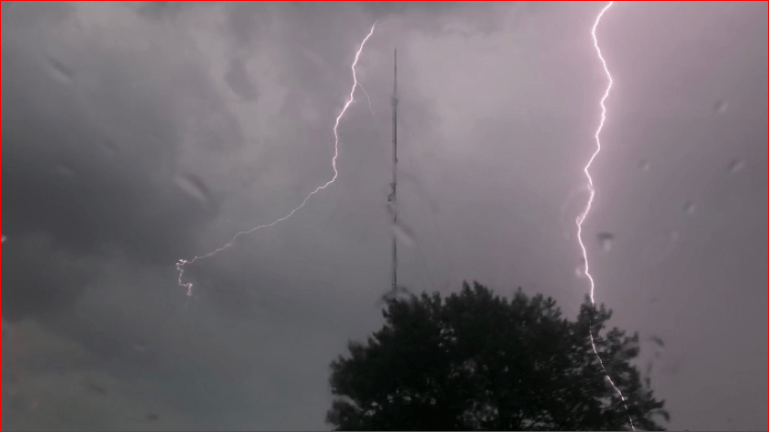