We hit 68° yesterday…that was very nice…the winds were blowing at around 40 MPH at times…that wasn’t so nice but that is usually what it takes to get that warm in late November. Today, obviously, the winds are blowing from a different direction. No longer southerly bring in warm air..now they’re northwesterly bring down colder air. 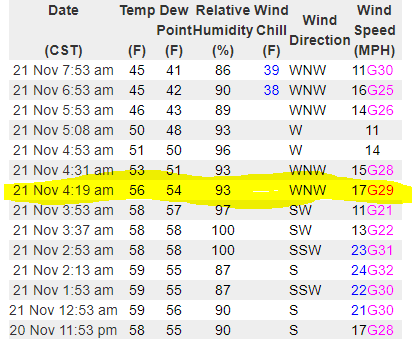 It took only about 30 minutes for it to get to the south side…but it was coming through quickly. 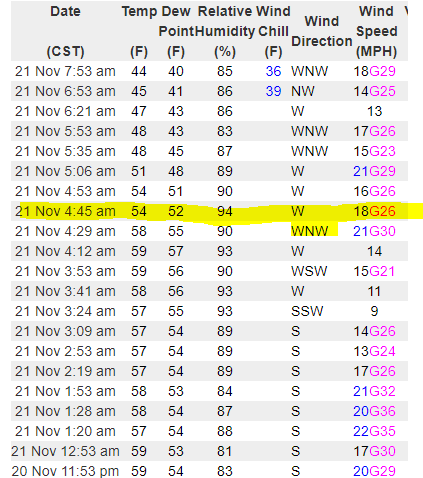 It did come through about 2 hours faster than I thought last night…but when things are said and done today…the official high will be 59° although this afternoon we may not get much above 45° as colder air continues to come into the region.

Today: Generally cloudy and blustery with steady to somewhat falling temperatures. Readings mainly in the 40s

Tonight: Mostly cloudy with temperatures dropping to near 32°. A cold rain or mixed rain/sleet is possible towards the SE of KC however…Butler/Sedalia/Clinton etc.

Friday: Cloudy with occasional wintry mix type precip and/or snow developing. Right now it appears temperatures should be in the mid 30s+ so I’m not expecting any issues at this point…something to watch

Sunday: Mostly sunny and milder with highs in the mid>upper 50s

Nice while it lasted right? At least the rain was helpful…and actually we did overachieve just a bit after a slow start yesterday evening. A few areas got close to 1″ in JOCO KS at least.

Data from CoCoRAHS this morning shows the needed rain fell just about everywhere. Nice little area of higher totals near the I-35 corridor towards the southwest of Downtown. 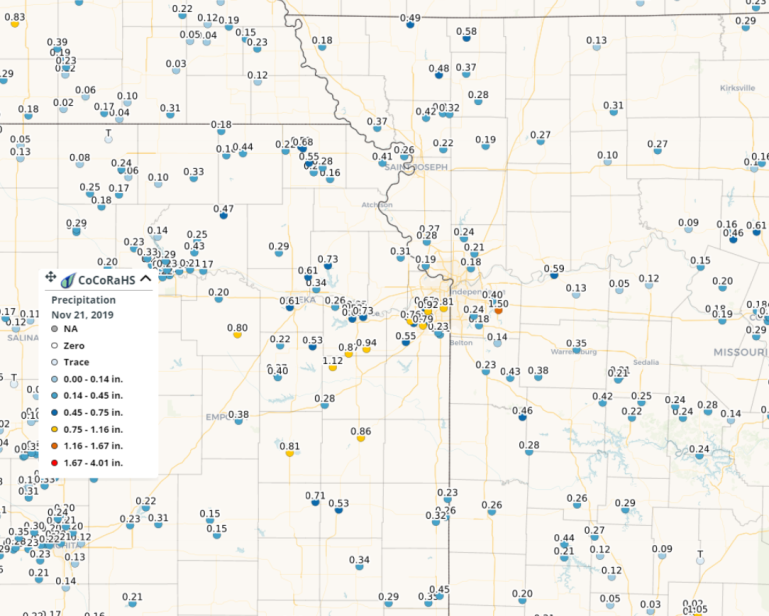 Now the cold air is here…and it does mean business. Nothing really unusual but cold and blustery weather for sure. The 8AM surface map is typical for a November cold front with the temperatures in RED… 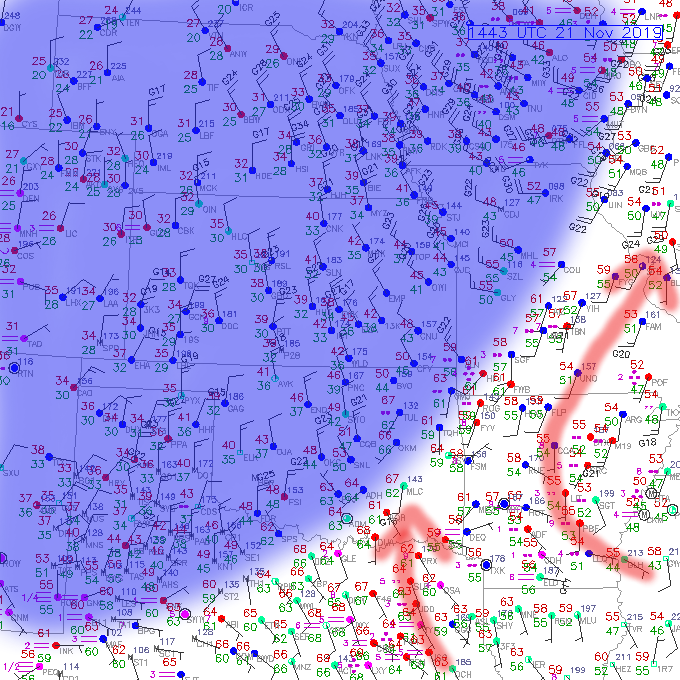 There are a lot of clouds coming this way today.

The next item on the agenda is the potential snow maker for tomorrow…this next disturbance has been watched all week long and now it’s into the western US.

The swirl is near Las Vegas this morning…

It will come out into the Plains tomorrow.

The air above the lower clouds though will initially be pretty dry…so that disturbance coming into the Plains will need to spend some of it’s energy in saturating the atmosphere as a whole again. This should take most of the morning to achieve…so I’m not overly concerned about the morning situation right now tomorrow.

But as the day moves forward…and with the atmosphere becoming more saturated…we should at least see some areas of wintry mix…perhaps some sleet/snow develop and in a few pockets all snow by later in the day and into the early evening. Don’t think this is a “everybody” type situation…the most favored areas are from KC northwestwards into NE KS and NW MO.

Temperatures at the surface with this may be in the 35°+ range so it may be tough to have many issues even later in the day. However tomorrow night IF the temperatures drop a few degrees we’ll need to watch the bridges and overpasses again I think. Something to monitor. I think though through the evening rush we should be in good shape.

Then the weekend looks pretty good…warmest is Sunday and with downsloping winds in the Plains we may make a run towards 60° in the afternoon. A front may come through on Monday dropping temperatures 5-10°.

Then there is the issue for Tuesday.

If you remember on the air and in the blog a couple of days ago I was watching this piece of energy out towards Russia. Well today it’s approaching the Aleutian Islands

It’s sort of a complex mess out there…but it would be the swirl in the far upper left of the image above. Here is a better picture…

It’s south of the islands on the left side.

That whole complex of “stuff” will be moving into NW Canada and then it will go through some additional evolutions…which is where the models will struggle. I know this…and this is why I’m not going to get all worked up about this system for a couple of more days.

I want to take you up to about 18,000 feet or so or what we refer to as the 500 millibar level…and show you the flow up there and point out the myriad upper level waves…small little dips that could create precipitation. See all the little dips…it’s a mess and that leads to little confidence it any outcome. 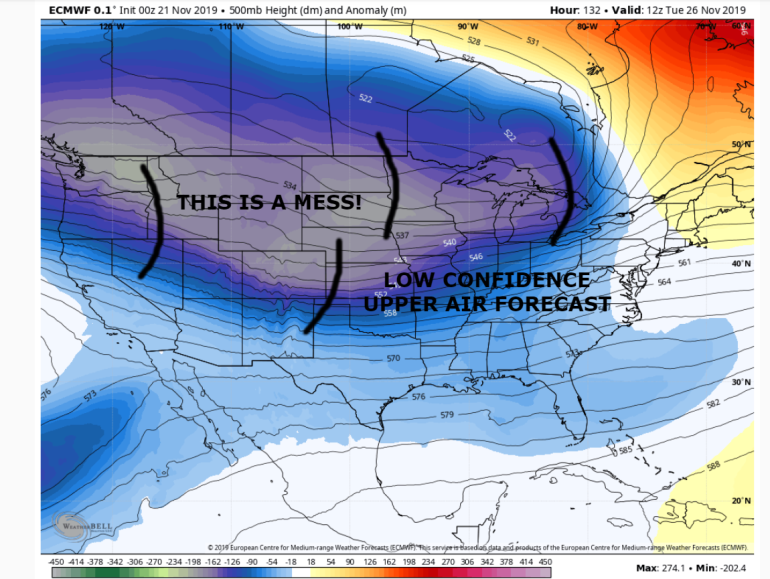 Model data is sort of all over the place regarding a storm in the Plains at this point and the ensembles do show “something” going on at the surface. See all the L’s below? 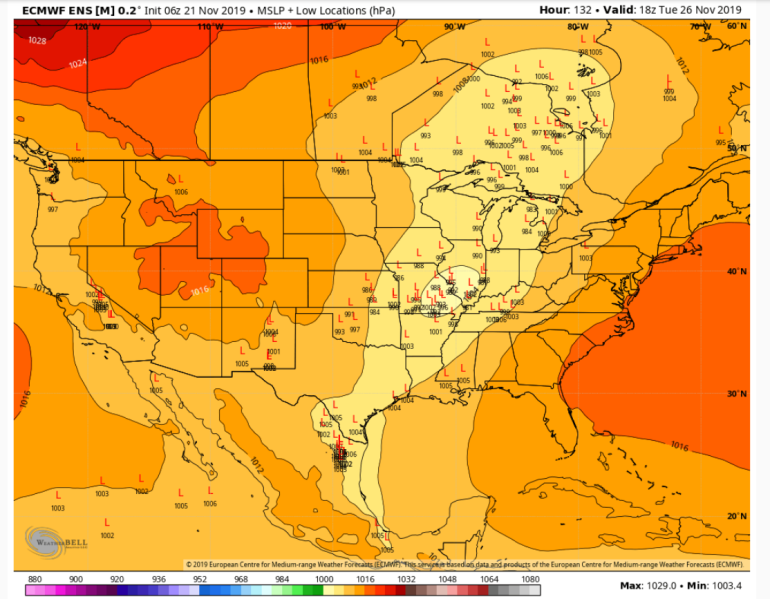 The average of those little lows are some sort of system near St Louis by Tuesday at 12PM.

That would place KC “region”, and earlier in the day too…in a colder sector of the storm…with the potential of wrap-around snow IF we’re cold enough. It’s still something that should not be disregarded right now…and that means there is potential for some sort of impactful winter system in the middle of the country…especially from here northwards into NE/IA.

Again though is is SOOOOO far off and with a chaotic pattern shown by some data…it’s not something to forecast for with any confidence in my opinion (at least specific impacts for a certain area).

Again still watching for potential and that’s what I do for you…you see set-ups and then we just have to wait for better specifics to reveal themselves…but with the players on this particular set-up I would expect the data to be all over the place for the next few days.

The folks from People of Cowtown have the feature photo today…thanks Margaret! 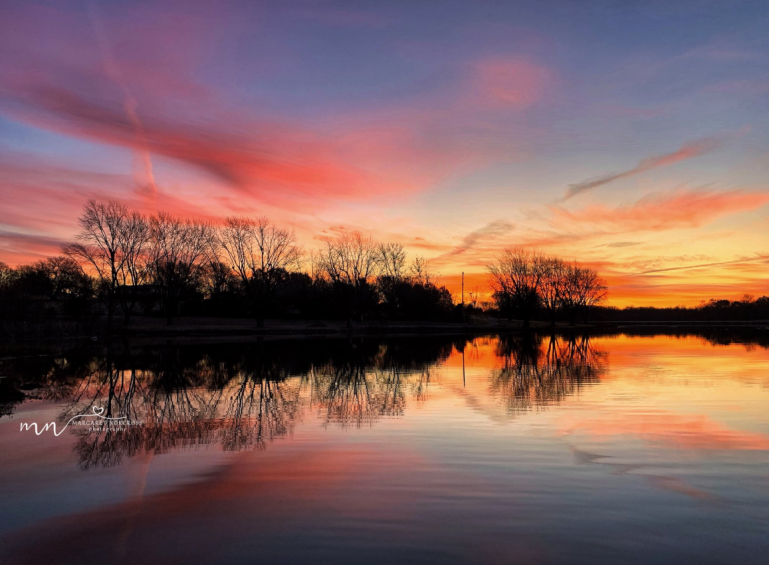