The holiday weekend has started and things are wet…very wet. Another 1-3+” fell last night in the region. Flooding was the biggest issue…and then there were the funnel clouds with a potential tornado touchdown in Jackson and or Lafayette Co. We got some great visuals that you sent in via FB and other social platforms and doppler radar had some stronger indications that something actually touched down near Lake Lotawana and towards Lake Lafayette 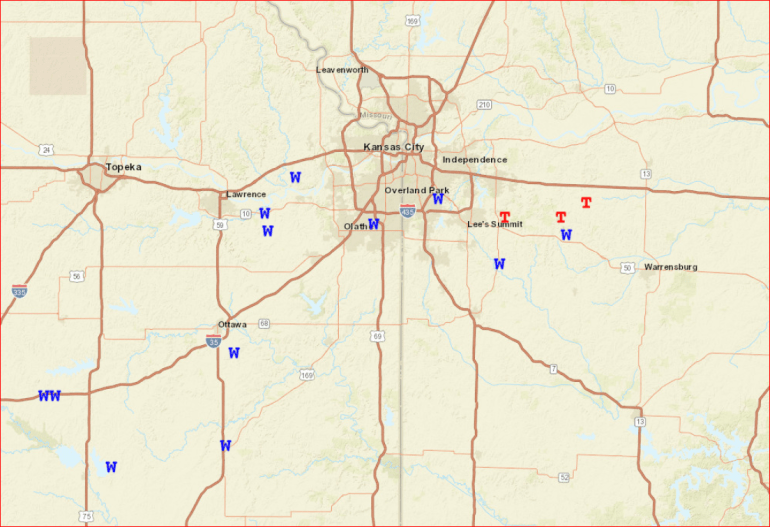 Since this was happening after the sun went down getting great pictures was sort of tough to accomplish.

In many ways this event reminded me of the tornadoes in the Metro last early May. The processes were sort of similar. More on that in the discussion.

Today: Variable clouds and warm with highs near 80°. There may be a few isolated storms pop up out there in the warmth of the day after 5PM or so. Coverage looks to be rather spotty right now

Tonight: Another round of stronger storms are going to be moving towards the area. These will develop towards western and central Kansas and move towards the region. Lows in the 60s. Storms may be severe with strong winds and additional heavy rain/flooding potential.

Sunday: After any brief AM rains end…we should be in good shape for the day overall with highs in the lower 80s. More storms are possible at night into Monday AM.

Flooding rains were the main issue last night and then there were some strong winds coming out of JOCO and moving eastbound. We sent out a tweet @fox4wx to start the alerting process as we noticed some signatures on radar that were suggesting strong winds coming from the west with one of the cells moving through…this is from last night…there were two tweets sent out…

(7:07PM) Heads up….southern Johnson County. If you're south of K10, you may encounter some 50-60 mph wind shortly pic.twitter.com/i0u9t4PiBT

(7:19pm) This wide area of the severe thunderstorm near Gardner is producing 60 mph wind gusts as it moves off to the east at 40 mph. Here are some timelines the wind may affect your area pic.twitter.com/2E7SMhHzwA

Notice the timeline towards the Grandview area especially….as that storm moved eastbound it was showing some “bowing” structure. This is a radar signature for the potential of strong surface winds coming from the storm. 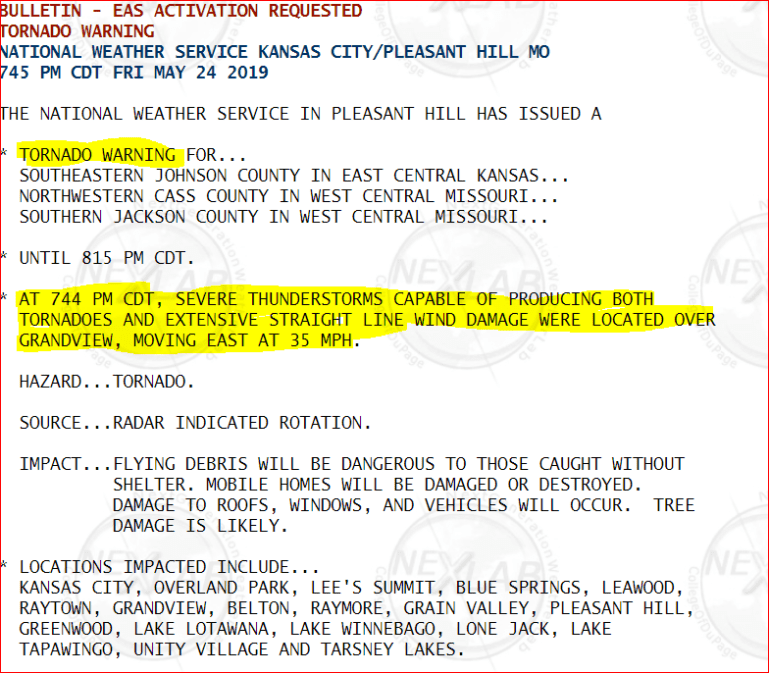 Garry was getting all this social stuff out on our various platforms for us…and it was very helpful to those who follow along.

As I started the blog with…there may have been some brief touchdowns in Jackson Co and Lafayette Co. I’ll be curious IF there is any damage indicators out there…I’m sure they’re looking.

Tim Moore from Lone Jack caught this wispy funnel…he sent me some video but I can’t embed it for whatever reason. 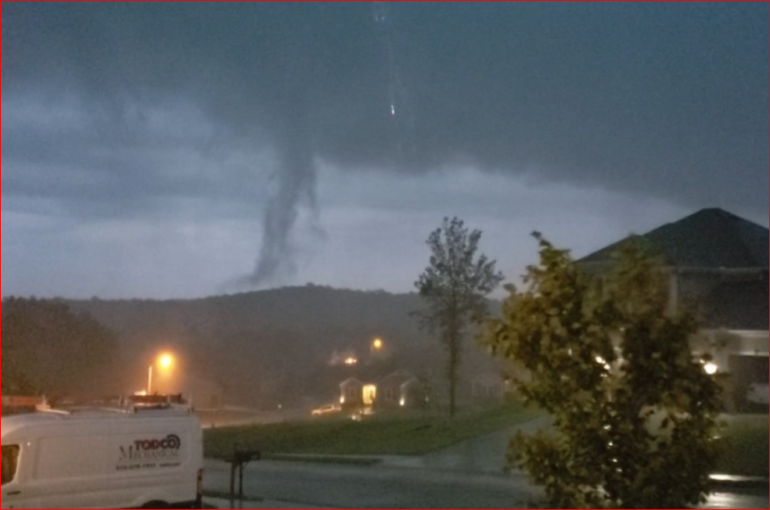 The video he sent shows this may have briefly touched down but it didn’t appear to do anything really of significance.

That is usually the story with these types of tornadoes…they’re called meso-vortices and can develop sometimes along the leading edge of a line of storms. It seems that the KC area has had more of these than anything else in the past lately.

They can form on the northern part of the bow echo and typically produce some localized stronger winds if nothing else. They’re formation though is usually short-lived and sometimes occurs between radar scans so they can be “missed” on occasion. Or they disappear on the next scan update. They typically are NOT the same “type” of longer lasting and more damaging tornadoes that are common in the videos that you see in the Plains. 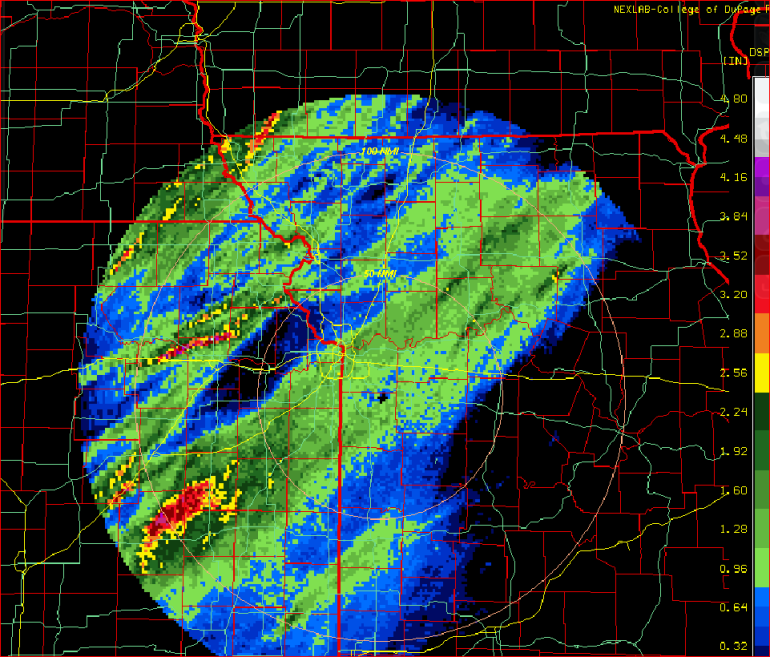 and I thought since I noticed this…I’d show you the last 30 days of rain in JOCO…I wish other counties had this sort of data readily available. 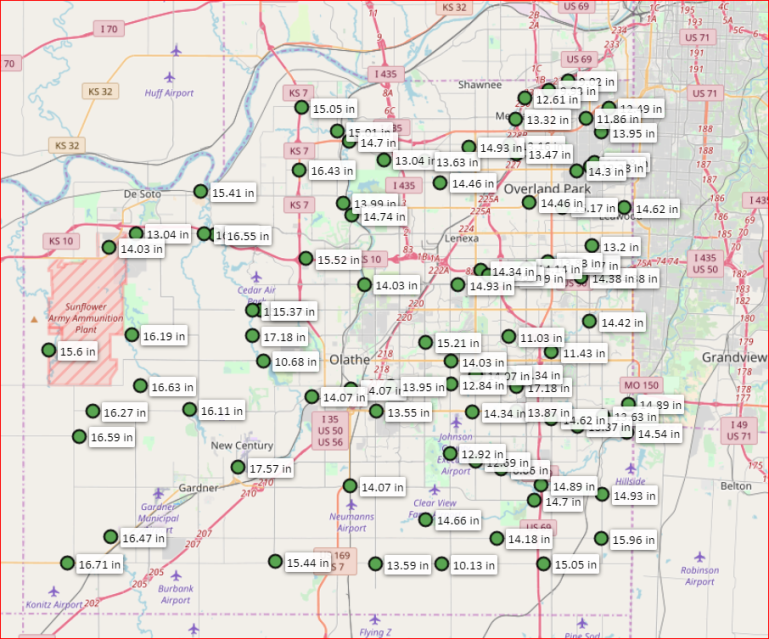 Tonight: Another round of storms will move through the region as what develops out towards the Plains tries to make a run towards the area…

Flooding and winds are the main threat…and since the ground is water-logged…any decent wind could knock down some trees again.

There may be more storms tomorrow night into Monday AM as well.

What we need is an atmospheric cleansing…and one is coming. The problem is that to cleanse the atmosphere we may pay the price again in additional severe weather in the region and the day of most concern is Tuesday.

A strong wave will be moving through the Plains and passing towards the NW of KC.

The air will heat up into the 80s and forecast soundings of the atmosphere from this far out at least suggest instability and adequate wind shear for severe storms and the potential of more tornadoes. So let’s circle that day for active weather with more information coming in the next 2 blogs about that situation

Our feature photo comes from Kyle Kern out towards Kickapoo, KS 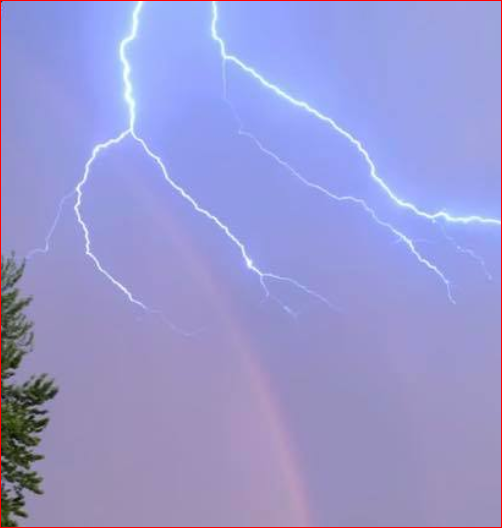 Community, police and Kansas City leaders joining together near Plaza for Unity March

More than half of Americans think race relations haven’t improved since the 1960s, poll says