So let’s just start with this…the record high for this coming Sunday…the 2nd…is 69° set back in 1924 and tied again in 1992. Consider that something to put back in the rolodex in case I need to bring it back up again…just sayin’.

Before we get there though…more winter days. Nothing too crazy cold but just sort of blah overall…especially the next few days.

Today: Increasing clouds and chilly with highs in the 30s

Tonight: Cloudy with lows near 30°

Tomorrow: Mostly cloudy with highs in the 30s

Tuesday night: Some snow is possible…perhaps up to 2″ in spots…mainly on the south side and south of KC. Lows near 30°

Wednesday: Variable clouds and chilly with highs again in the 30s

The weekend was a hot mess of gray skies. This isn’t that surprising when we have snow on the ground…helping to refrigerate the air above the surface. The cool air combined with melting snow adding moisture to the air…helped to contribute to clouds…so many clouds. Clouds with lingering snow-pack is never a good recipe for temperatures to warm-up much. Sadly just west of KC…where there was more sunshine and no clouds…temperatures approached 50°…we’re talking towards Topeka…not that far west of here. Yet we were stuck in the 32° area.

The snow is mostly gone now in KC and the sun is out…for minutes this morning as clouds are coming back into the area today…and by the time you read this it should be cloudy again. Weirdly when the clouds come into the area the temperatures may actually creep up a few degrees.

Overall it will be turning blah again for the rest of the afternoon.

The next item is a possible snow coming on Tuesday night. This is connected to actually two waves caught in the western US this morning.

One is down towards the 4 Corners region of the southwest…the other is near Salt Lake.

They’re not overly strong waves…the southern one will pass pretty far south of KC and the northern one will move towards Nebraska and then dig into MO. You can see both nicely in this map showing the waves around 18,000 feet or so. This is valid for 12AM on Wednesday morning. 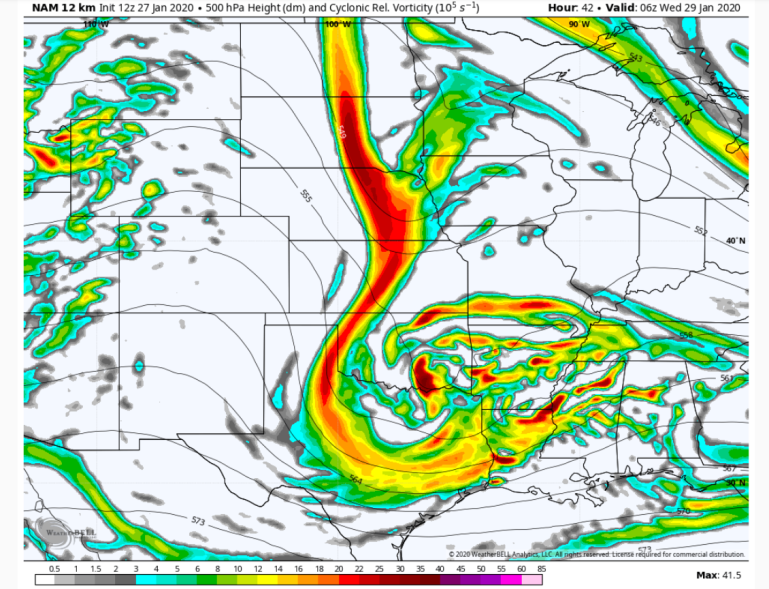 The southern wave will be the stronger one…and have better moisture through the atmosphere to work with it appears. 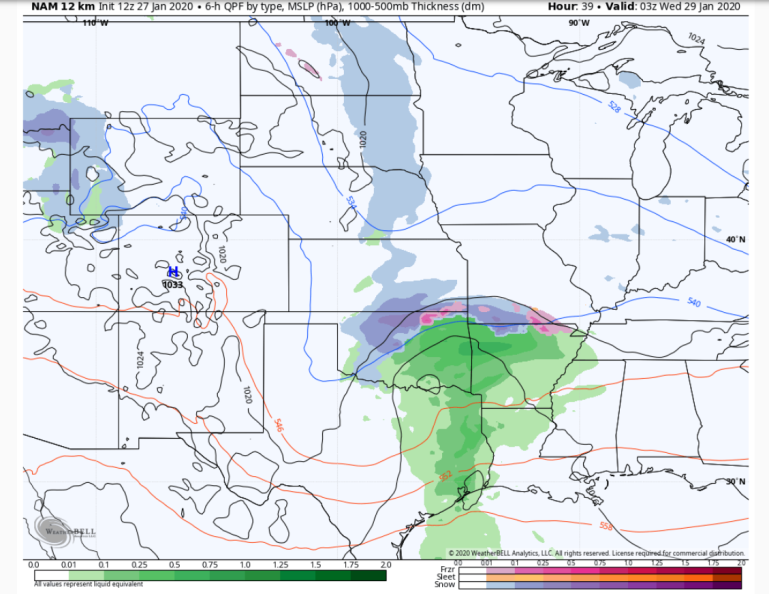 You can see the influence of both waves on the precip depiction above valid for 9PM on Tuesday night.

As the wave in NE digs in…we should see a filling in of the snow between the two systems so that by Wednesday AM near daybreak we have something like this. 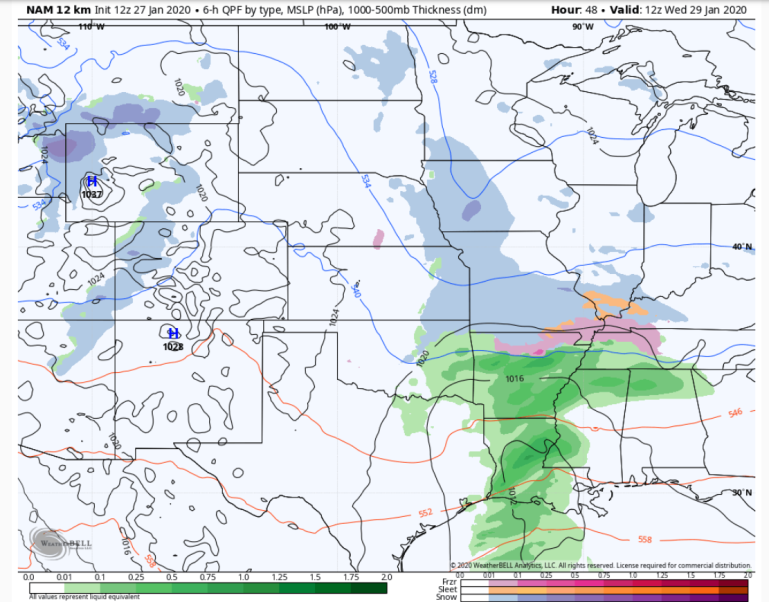 The 12 hour liquid total ending at Noon Wednesday shows roughly .05″ liquid around these parts…more north and a bit more south. 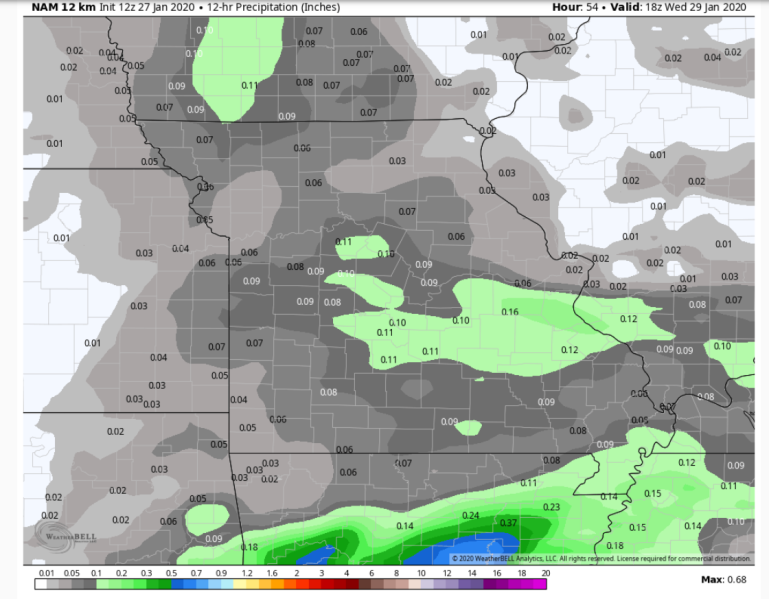 This could be a classic split type system with us getting <1″ and other areas getting a bit more than that…north and south of the Metro. There is a small upside to this though

The way we could see an uptick is IF we see the system in Nebraska dig in a bit more…and come closer to us Wednesday morning.

From there we start a significant warm-up. As in VERY significant…as in maybe near record warmth set-up heading into the weekend and maxing out on Sunday and Monday the 2nd and 3rd.

This is a possibility…

The air above KC may actually be warmer than the air above Miami on Sunday for #SuperBowlLIV.

The chance of us being WARMER than Miami is there for Sunday afternoon (or within 5° of each other).

We may be set-up for a perfect downslope warming day. pic.twitter.com/k13TT4UZJB 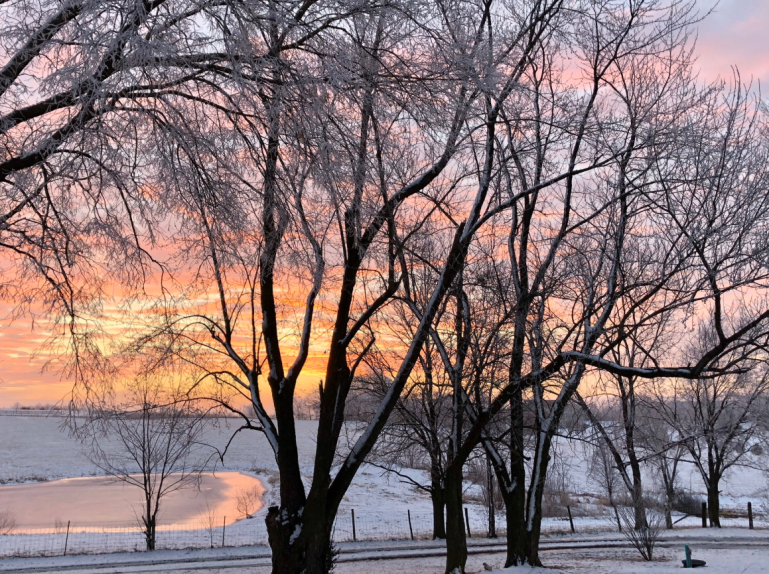 Apple warns of ‘iPhone supply shortages’ because of coronavirus