Good morning…it’s blustery out there and cold…we’ve been colder this season and this air mass that moved into the region yesterday is a pretty stout cold air mass…but the one coming Sunday (mostly towards Monday) is even stouter and that will deliver quite the cold punch for a few days. There will be some modification and warming (somewhat) later next week.

Some snow is possible as well…the timing appears to be on Monday…something to watch…probably flurries or snow showers but Veteran’s Day will be cold and blustery.

Today: Clearing skies and cold with highs in the mid>upper 30s. Diminishing winds.

Tonight: Clear and cold with lows in the lower 20s

Tomorrow: Sunny and chilly with highs in the low>mid 40s

Saturday: Much warmer! Data supports highs approaching 70°! Let’s not go there yet but highs may be 65-70°

Sunday: We may salvage this day as a cold front comes through later in the morning/afternoon. Highs 55-60° but dropping later in the day and especially at night

This has been a fun week to do some weather forecasting. These repetitive cold shots of air coming into the area preceded by nice warm-ups are fascinating to watch…another warm-up is coming on Saturday too!

Yesterday was a somewhat unusual day…we had a big warm-up…66° with very little wind. Usually we get a lot more wind with these warm-ups locally…but the winds held off till the front came through and then the winds cranked to 35 MPH and the temperatures started to drop off pretty quickly.

Then there was the smell…

At first I thought maybe it was connected to a sudden release of leaves from the strong winds…our foliage this season was fair at best…not he leaves are just ready to drop and I thought that maybe they were dropping and somehow there was a “smell” associated with the degraded and decomposing leaves.

In reality the smells from the feedlots up in NE/IA and other areas north of KC wafted down towards our area. We weren’t alone…I got reports from Denver, CO to as far east as Chillicothe…and all the areas in between.

Those north winds meant “business” no it wasn’t your imagination.

The weather map this morning shows the cold air nicely…the RED numbers are the temperatures…some teens towards IA and NE. 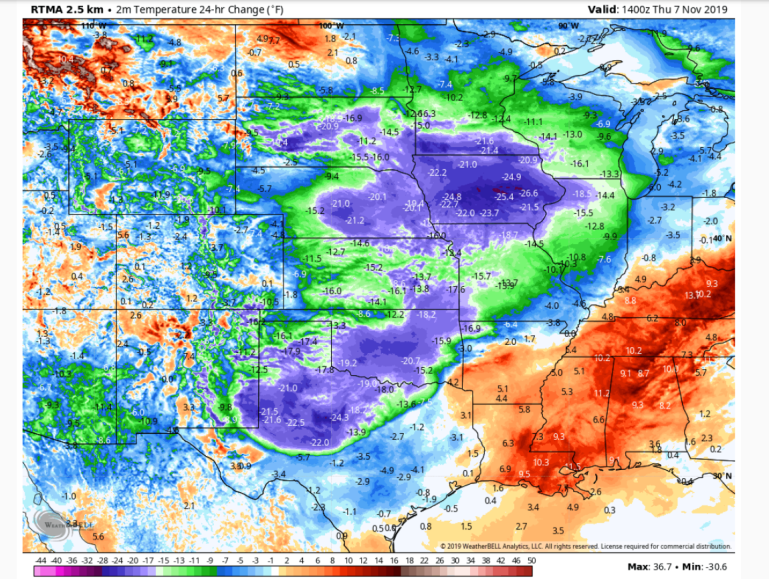 The surface map this morning shows the area of high pressure in the Plains…it will move away as the day moves along.

This core of cold will slide off towards the east and northeast over the next 2 days and be replaced with a substantial warm-up on Saturday. Actually aloft the warmer air spreads in quickly Friday night…still cold here at the ground though…then on Saturday we should be off to the races.

The models have been playing catch-up to this for several days…my forecasts have been substantially higher for Saturday than the models and I’m still very bullish about the warm-up potential. The issue is how warm do we go.

Warm air will be created by a nice downslope warming event that will come down through the Plains tomorrow night into Saturday. I’m typically not a fan of dramatic turnarounds from low 40s on Friday to mid 60s on Saturday…there are sometimes clouds…or other things that prevent such rapid turn-arounds and sometimes despite the warmer air above us that would support these high values in my forecast…something doesn’t happen correctly.

The only “something” that I can see would be a lack of wind stirring the air up enough to help bring down the warmer air above us…it’s possible but while my forecast yesterday was more aggressive than the models were remotely thinking…we still outperformed my ideas…and that’s sort of what I’m thinking about for Saturday…be aggressive. So unless something really changes…let’s go with 65° as a starting point. IF there is more wind…70° is not out of the question.

Something others won’t think about…we’ve lost a lot of the “greenness” from the early fall and summer. The land now is browner and that allows the land to heat up a bit more compared to if it’s “green”.

The change in the forecast…compared to a couple of days ago regards Sunday. While the front comes through during the morning or early afternoon (we start near 40° or so) the coldest air may lag behind the front by 100-200 miles or so…that means that we can warm-up on Sunday…perhaps 55-60° before we turn colder…

That cold air will be with us on Monday and Tuesday of next week…we may be down to near 10° on Tuesday morning!

Again take this air mass…add in a bunch of snow cover in the northern/central Plains and put all this in January and we’d be looking at temperatures of -5 to -10° for lows!

We’re not there yet!

Finally there is a snow risk on Monday with the colder air coming southwards. It’s not the greatest set-up for accumulations because that cold air will be dry air too…but IF there is enough lift that can be generated…there could be some dusting to 1″ amounts out there somewhere.

So a lot more to talk about over the next 5 day or so! 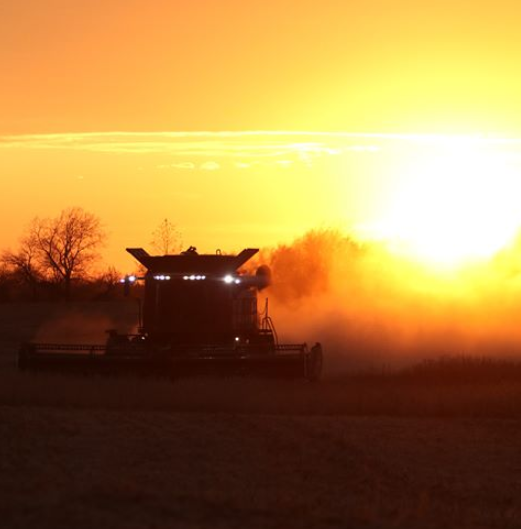