Yesterday was a bear of a day to forecast…especially the night before…would the cold front be farther south…would it be farther north…would we be in the warm sector, would storms fire and about 5 other things. Even yesterday morning it was somewhat questionable about where the warm front would set up in the afternoon…making our temperature forecast tricky.

In the end my forecast (from Tuesday night) was nearly perfect…mid 80s…high humidity and then storms after 4-5PM or so. It was tricky for sure but when a surface low comes up a front, like what happened yesterday afternoon…it will force a front to move northwards a bit more…and in the end the entire Metro was in the warm sector. Heck Ottawa was 90° with numerous areas in the upper 80s.

Those are rewarding forecasts…and then there were the storms…

Tonight: Variable clouds and cool…without the clouds we’d tank but with clouds…let’s go 45-50°

Tomorrow: Mainly cloudy. There may be a few sprinkles/showers around in the PM. Cool with highs only around 60°

Saturday: Rain likely in the AM…then clearing out. It may turn into an OK day with highs approaching 70° IF we get enough PM sunshine

Sunday: Should be seasonable with highs in the mid 60s…good for the game.

A reminder…blogs will be infrequent for the next 10+ days. I’ll be sporadically on vacation through mid-month. I have one planned for tomorrow which will be a podcast blog. I recently talked with Joel Nichols, you remember him from his various stints doing TV weather and other things at here in KC…he’s a fun guy to talk too and we did a 2 part podcast. The first part is coming out tomorrow.

Onwards to the weather…

The morning surface map above shows temperatures in RED. 50° this morning and we may drop another degree in the next 2  hours as colder air is moving in. The fall cold front that took away the summer air mass is moving south of I-44 this morning…and now colder air is sweeping in.

That’s at the surface but aloft we’re still in SW flow…and you can see the clouds streaming this way.

It’s been pretty chilly to the NW of the region lately,a s we’ve illustrated all week long. The cool moist air is providing the low clouds this morning..the SW flow aloft is providing the clouds streaming up the I-35 corridor today…it’s a deal where it’s 1) somewhat tough to clear out and 2) really tough to warm up with the cooler near surface air coming down from the NW…so for the 1st time in weeks…we actually will be overall below average for the day. 31 straight days ob above average temperatures will be toast after today.

This will be even sharper this afternoon when we compare the mid 80s from yesterday to the mid 50s today!

Speaking of the heat from yesterday…records..daily and monthly have been passed out like candy back east over the past few days…yesterday alone…

A total of 87 sites broke daily high temperature records yesterday, with a few of them breaking all-time October records. Heat will continue today and Friday across the Southeast, before a cold front brings more fall-like temperatures. pic.twitter.com/UGe8tf2woM

Some of those records are also for the month of October…100s in AL is bizarre. 302 records tied or broken this week not including today. We tied a record warm low and broke one on Tuesday.

More records will be broken today…

The entire Southeast from Tallahassee to Atlanta and Nashville will set record highs today. The heat extended into the Ohio Valley but not D.C.

New York City and Boston in the 50s.

We’re also seeing expansive drought taking hold in the SE part of the country…and Texas is seeing one expand as well.

Drought was pretty much a non-issue for the US for months…things are changing for now in the SE and TX. AZ is also starting to dabble more into drought conditions as well after poor monsoonal rains this past summer.

Now that we’re below average…the only day in the next 5 that could be above average is maybe Saturday and the AM rain needs to move out of here fast enough for that to happen.

Tomorrow though has it’s own challenges…

With us remaining in SW flow aloft…there may be some disturbances coming up from the SW>NE…there may be one tomorrow and it will be running into a cool and dry lower part of the atmosphere. So that aspect of things would need to change (become more saturated) for us to get some showers tomorrow. At this point, unless there is faster saturation happening, let’s go with some sprinkles or light showers possible, especially near and NW of I-35. It won’t be the greatest of days and there may well be a lot of clouds again…so that should keep temperatures 10° or so below average.

Another wave caught in the SW to NE flow aloft zips through the area in the AM…this time the air should be more saturated from what happens Friday (sort of a table setter) and also because the overall atmosphere will have more moisture in in. So whatever disturbance(s) comes through will have more “juice” to work with and create rain.

My suspicion is that this will not last all day and IF we can manage to clear things out quickly we may warm up in the afternoon as the winds switch towards the NW again and the sunshine comes out.

After Saturday though…we’re in great shape for nice fall weather through next Wednesday…cool mornings and mild afternoons with a good dose of sunshine thrown in as well.

Our feature photo comes from @BlueSpringsWx…what a sky and it really “looks” like fall now doesn’t it? 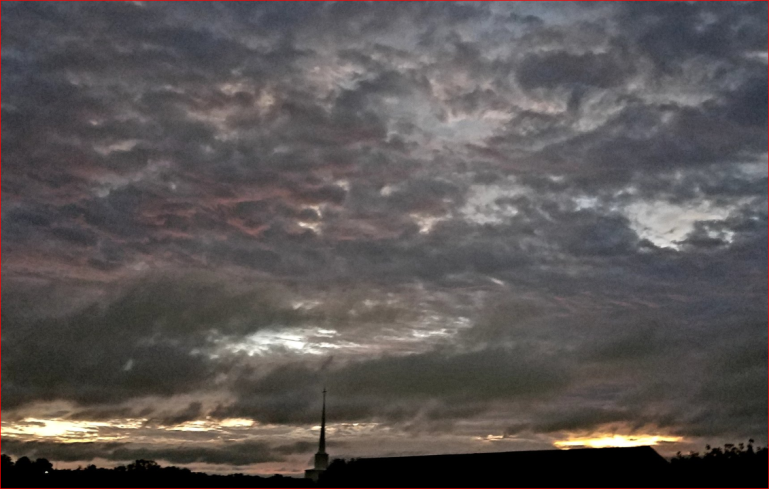