Happy Monday…and a phenomenal day on tap today with some of the warmest weather we’ve seen so far this Spring coming our way today. So far the warmest day is 77° this past Saturday…we’ll try to get there today or go above. We’ll be ahead of a very weak front that will slide through the region tonight. It’s impacts tomorrow may be a few degrees but overall it’s warm for a few days…then it won’t be warm again for a while. Wednesday could actually be in the 80s (maybe) ahead of a major and significant storm which is going to bring a terrible April blizzard towards the northern Plains and upper Midwest but strangely in KC may not give us much of anything…except wind.

Tonight: Fair and pleasant with lows in the 40s

Wednesday: Windy and warm with highs near 80°

For the last 5 days or so I’ve talked about this massive Plains storm that was likely to affect the area during the middle>end of this week…and that is still on schedule. The only real change to thinking was a bit of a slowdown in the arrival of the colder air. That remains on track for sometime early Thursday AM. The weather on Thursday will be substantially colder than the weather on Wednesday by some 30-40 degrees. That doesn’t involve the winds which will make it feel even colder!

So watching the model guidance has led me to wonder (and I’m working on this aspect of the system) just how strong a storm for the month of April is this?

It’s actually and potentially one of the strongest storms in KC history, for the month of APRIL. I want to show you the lowest air pressure records for this month.

Here is some other information from theweatherprediction.com

That’s really low air pressure. You’ll see it if you have a home barometer.

So this storm, per the model data, and again it’s just model data may be represented by a center with an air pressure of 982 mbs when it passes north of KC early Thursday AM. The map below is for 4AM Thursday when the colder air is getting ready to sweep through KC and wipe away the warm air. 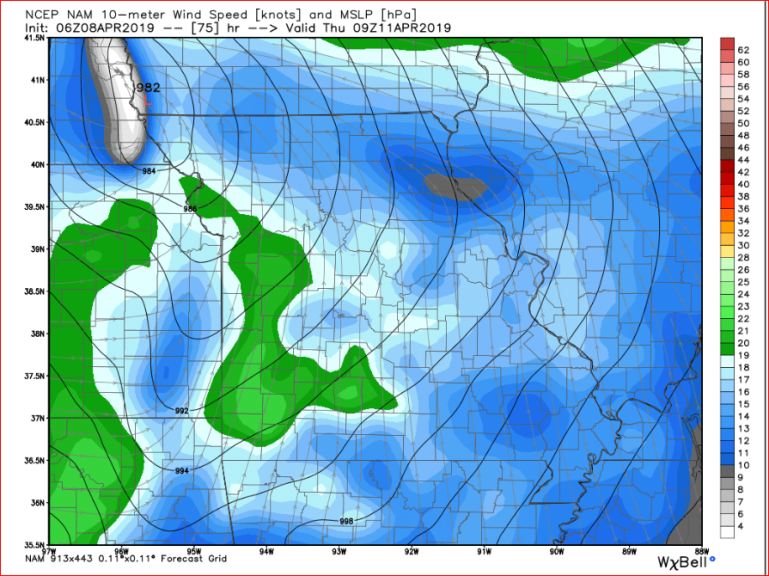 The lowest air pressure is where the “L” is in the above may…and that is in SW IA. That too is NOT a record for IA…their records are in the upper 970s mbs…still pretty amazing.

So this is just one aspect of the storm.

The record lows were mostly established in early April of 1982 or 1983. There were two storms in back to back years that had extremely low pressure in early April!

It will come into the US tonight and head towards the 4 corners early Wednesday…then come out into the Plains on Thursday. As this occurs aloft the strong surface storm will develop and intensify as it moves through the Plains as well. The surface and upper level storms will probably be located on top of each other and when that happens usually the storm slows down to a crawl for awhile…and that is expected to occur on Thursday.

So now it gets weird. This will be a wind maker for sure…especially WED into THU. There should be a drop off in the winds early THU AM before the colder air sweeps into the area.

These winds will bring some moisture northbound BUT that moisture may not be very deep…it may be more shallow. This affects the thunderstorm risks…which right now look to be focused farther northwest and north of KC. There are several reasons why…but this blog is getting too long already.

The end result is that while some activity is possible locally at some point WED into early THU AM…nothing too bad is expected right now. The front coming through early THU AM is also not too favorable for rough storms locally despite the strength of the storm. 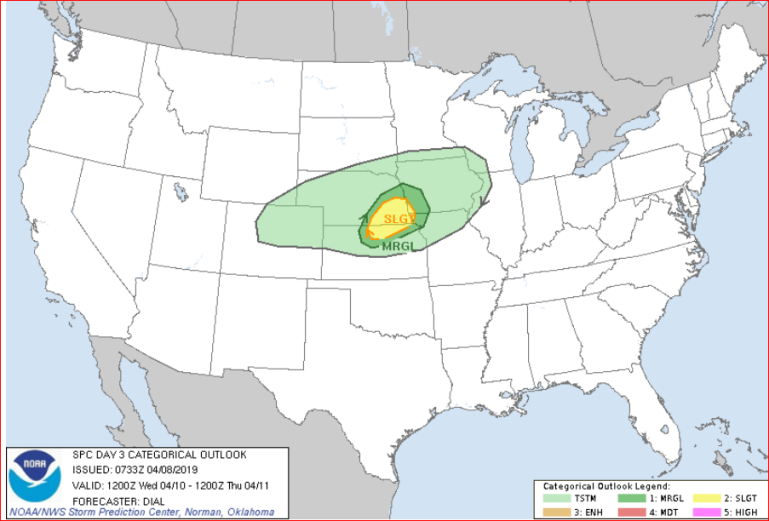 The SPC has this area as being watched for severe weather later Wednesday especially.

This will be a fascinating storm on satellite as well. It should look similar to the “bomb” cyclone from last month…it may even have a cleared out center of the storm in SW IA!

Then there is the matter of the circulation of the storm…warm at first…the storm will tap colder air and drive that colder air into the Plains and southwards on Thursday and that will sweep into the area. We’ll probably be well into the 60s THU early AM before daybreak and see plunging temperatures (20-25°) in a one hour time frame near or before daybreak. So in reality…temperatures when most people are awake on Thursday will be in the 40s with wind chills in the 30s. Our official high will occur before 4AM or so. When it drops it will drop.

Here is the NAM forecast for 10AM. 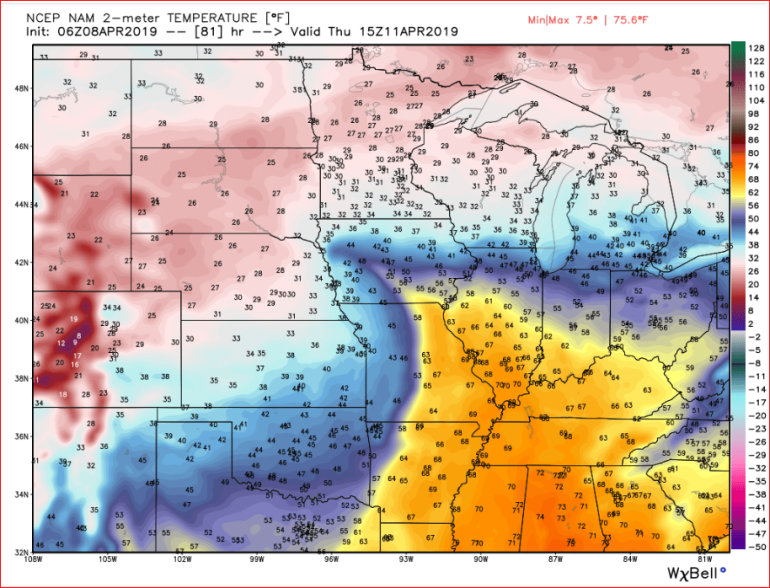 We may go up a couple of degrees in the the afternoon (we may not though too) but my goodness. From near 70° after 12AM to that in about 3 hours or so!

Now some of the 2-3 FOOT totals may be overdone…but this is another devastating storm for the ranchers up there. 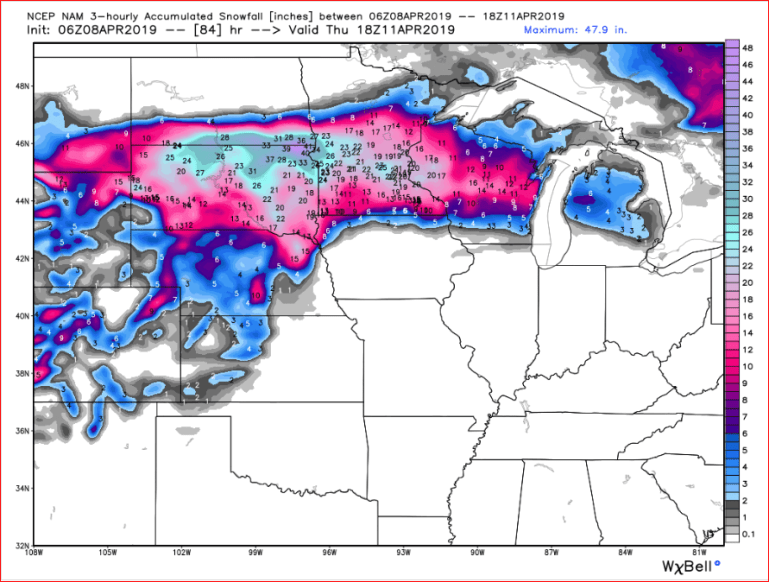 The “official” forecast is this…and these numbers below could go upwards. 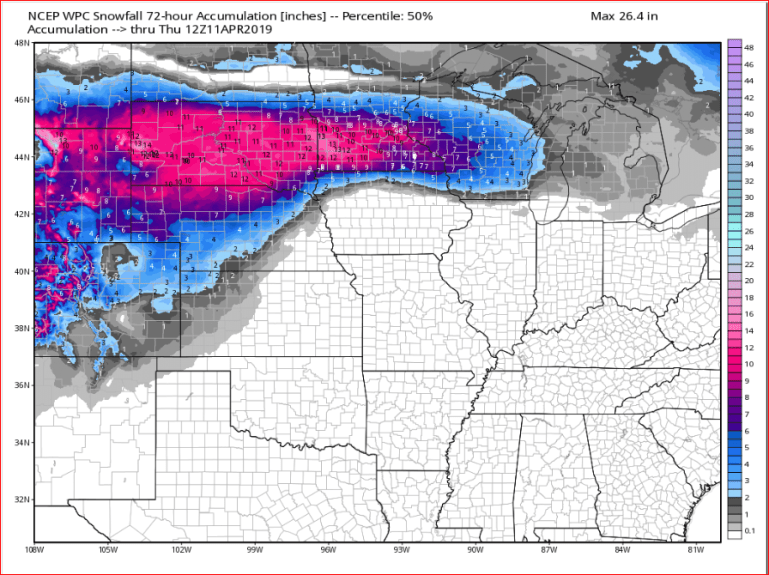 So how much moisture (for us rain) is forecast with this whole storm. 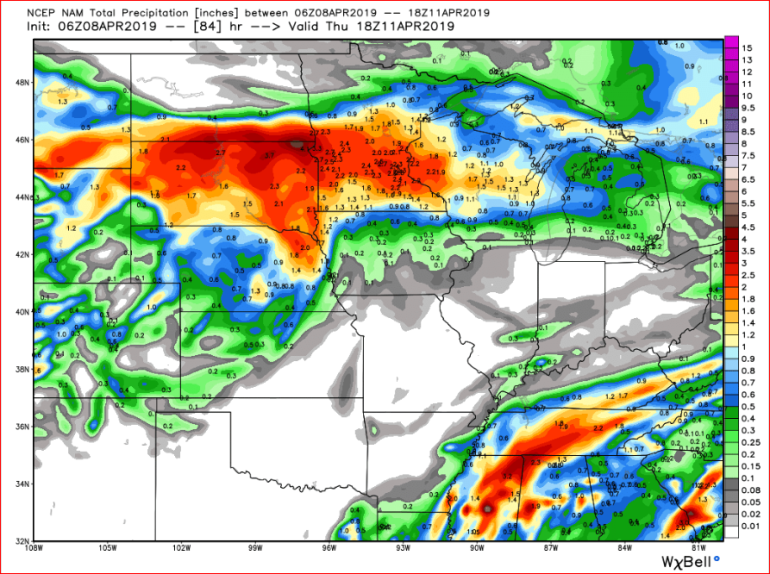 Amazing…some or many may get less than a tenth of 1″.

It’s something to watch…in case better moisture comes this way and things get more active…but it’s a fascinating storm to watch.

The winds though will be 25-45+ mph with the potential of higher gusts WED and then perhaps a bit less but still maybe 20-40 mph on Thursday.

We need to watch for a secondary storm over the weekend…

Our feature photo comes from Vannie Doty near Paradise, MO 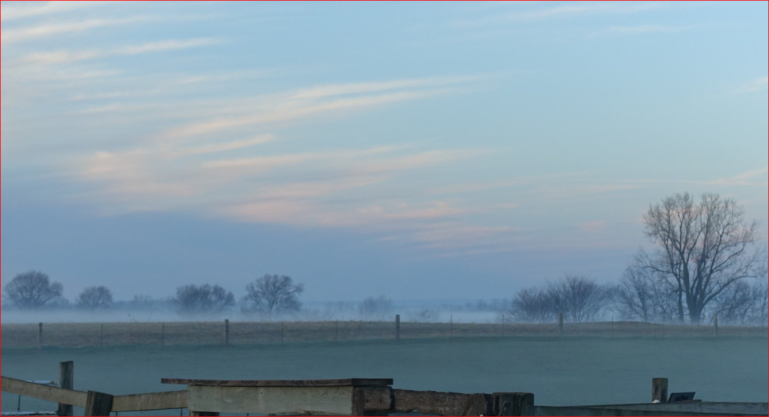