Good morning…a rather hot and humid day is on tap for the area as we try to make a run towards 90° ahead of a cold front. This front will sweep the hot and humid weather away for a couple of days and allow some cooler and drier air to move in. Tomorrow looks outstanding. Today though will remind you that even though meteorological summer is overwith…astronomical summer continues for another 3 more weeks or so.

Dorian is also in the news and has been stalled for about the last 24 hours or so…it should start to get tugged northbound today.

Tonight: A slight chance of some showers later this evening but turning cooler and drier with lows approaching 60-65° tomorrow…milder south of KC

Tomorrow: Nice with sunshine and highs near 80°

Let’s start with our cold front… 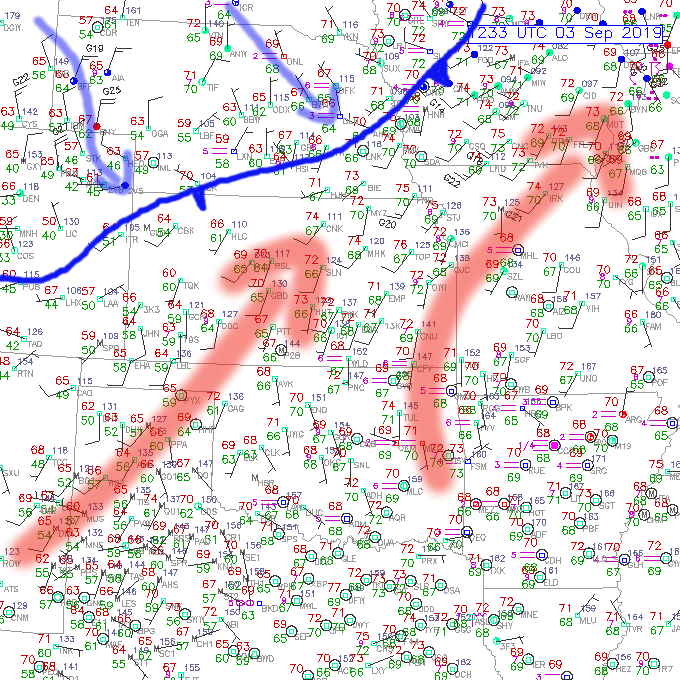 It will move through later this afternoon but the cooler and drier air is going to lag behind the front a bit…you should notice that trend more so later tonight towards 12AM into tomorrow morning with a drier push to the air.

The front is actually coming through the area at a pretty decent time to fuel of storms…roughly near peak heating…but the data today isn’t too supportive of storm formation along the front. There may well be a cap in place. Sometimes you can get a little “sunset magic” to happen and pop a few but the data this morning isn’t so optimistic. I think the chance is about 20% at this point.

There may be some isolated activity later this evening behind the front as well.

We’ll be in the drier and more comfortable air tomorrow…and into Thursday AM before we trend warmer again to finish the week ahead of another front coming in later Friday.

Overall not much moisture is expected through the middle>end of the next work week.

Temperatures will be bouncing around…although no overly cool weather is expected in that timeframe based on today’s data. If anything temperatures may trend to above average levels.

Here is the CPC forecast for the next 8-14 days…don’t disagree with their idea of probabilities of above average temperatures for most of the 1st 1/2 of the month.

The storm’s position hasn’t change much at all since yesterday’s morning’s blog, which is remarkable really. A near stationary storm just raking Grand Bahama Island. I’ve seen some videos from the northern Bahamas and it doesn’t look good. What wasn’t ripped to shreds by wind has likely suffered storm surge damage that in some cases may have approached 20 feet in some areas…and the elevation of that island isn’t all that much to begin with.

Dorian is definitely not as healthy today as previous days. It’s still a formidable hurricane though but has markedly become less intense over the past 24 hours.

The eye has become less concentric…larger and in general a bit more ragged looking. In reality the storm may not even be as strong as what the advisory states.

Being hit by a major hurricane is bad enough but being hit for such a prolonged period of time yesterday through repeated high tides and crashing waves is very unusual to outright rare. That’s what the folks on Grand Bahama Island dealt with yesterday. Repeated storm surges and inches of rain.

This video is from Freeport, Bahamas on Monday morning. Water has risen to the second floor of this home.

You can see the extent of damage from this special view with a different type of satellite/radar product meant to penetrate the clouds…this is the extent of the flooding. It’s called SAR radar and it stands for Synthetic Aperture Radar which sends a frequency through clouds/rain to see what’s happening on the ground apparently. Never heard of it before. Fascinating stuff.

Notice how is connects to the elevation of the island.

This is a topographic map of Grand Bahama island.

Dorian's storm surge is estimated at 18-23 ft, which would submerge everything in green and significant parts of the yellow. Hopefully most people managed to move to safe locations. pic.twitter.com/lyoFA8mPnV

There is still a weekend risk of landfall somewhere along the eastern coastline or outer islands of North Carolina it appears.

And storm surge flooding is possible up the FL coastline towards VA too…here is one example.

Dorian will continue to make national headlines for the rest of the week.

Our feature photo comes from Tiffany Lanier out in KCK of the sunrise this morning. 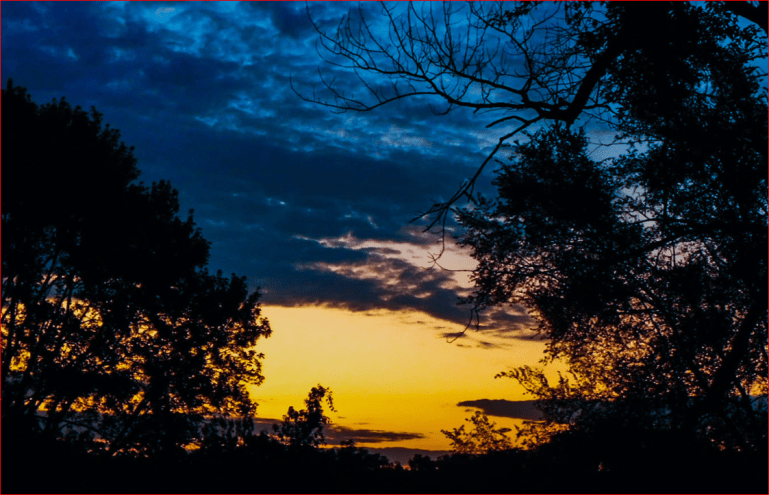