The lead-up to this blog has taken a few days to come into focus. Nobody should be surprised about whats ahead…snow is now a virtual lock. The issue has been, for the last 48 hours or so, do we get the main energy from the storm on Monday…I kept going back to the meteorology of it as opposed to the “modelogy” of the situation. IF that 2nd wave Monday was real and strong…we’d have a significant snow. Data today is now supporting the main wave coming on Monday and that means this will be a significant snowstorm (at least the odds are high) for the KC area.

I mentioned yesterday that for me at least 3″+ is a snowstorm (again very subjective)…and I think we’ll get that during the course of the day/night tomorrow…then on Monday we get another significant shot of snow…with another 2-5″ possible…so IF you do the math a pathway of 4-8″ is now becoming more likely in my opinion.

Tonight: Mostly cloudy and cold with lows down to near 20°…maybe teens.

Tomorrow: Light snow arrive during the mid>late morning…roads will become slick…this will affect the game and the trip back home after the game…temperatures in the 20s. 1-3″ possible during the day through sunset.

Monday: Main part of the storm…snow into the afternoon…1-5″ likely…lighter totals on the north side of KC towards and north of 152 highway/Berry Rd-KCI area to perhaps 5″ towards Harrisonville/Warrensburg

Overall I’m thinking that this may turn into a 3-7″ (updated) snowstorm assuming we get that 2nd wave…without the 2nd wave this will be a 2-5″ snow event.

The data this afternoon and tonight is still in the camp of an overall snowstorm BUT there are questions about who gets the most snow for the 2nd wave of snow on Monday and that will again, as mentioned this morning determine IF this is a nuisance snow or a higher impact type snow into Monday.

There is some evidence tonight of a tight snow gradient setting up in or near the Metro. For a forecaster that is very tough…and right now the gradient of nuisance to highly impact type snows is pretty much close to I-70. The key remains Monday. It’s possible for areas north of Downtown KC that the most snow will come tomorrow…with lighter amounts on Monday and for areas south of Downtown…you get tomorrow with more impacts to the snow on Monday…especially into Cass/Miami County areas and eastwards from there…you can see how areas on the south side…435 South type areas are sort of on the gradient line…that makes it tough.

The issue is what happens to the wave as it comes out through the Plains region Monday…does it spin a bit south of the Metro…or get close enough to us. Why is this important? Because the decent+ snows will be on the north side of the wave…in a tight gradient

Just looking at the “liquid” equivalent…and you can get 10-13:1 ratios from this…off the NAM model… 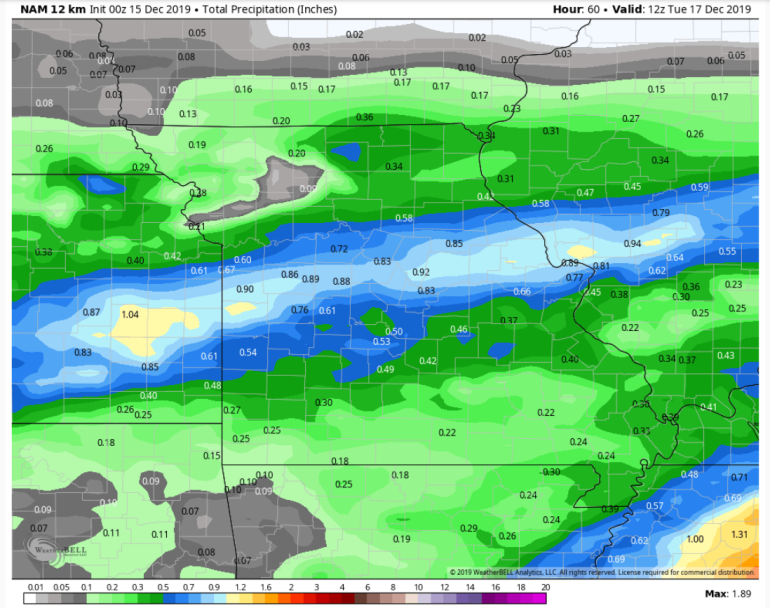 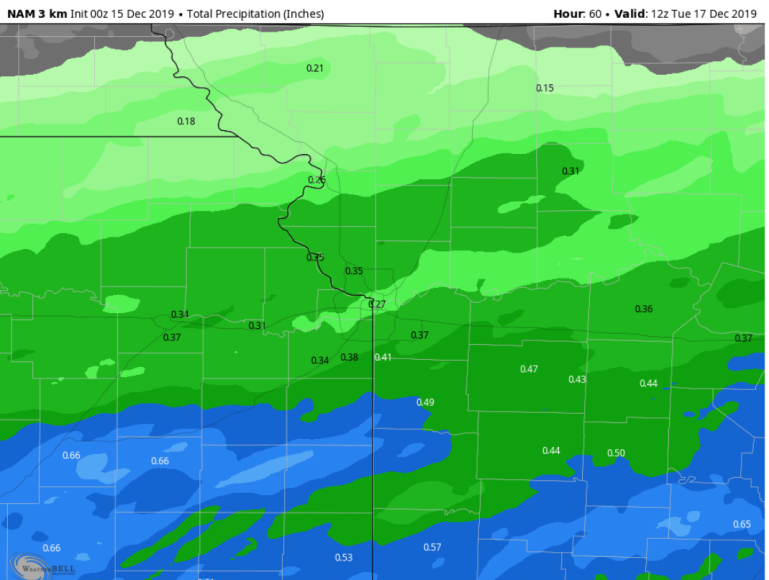 Solid 1/3″ to about 1/2″ ranges on there and that to me seems a bit more realistic…again this would be solid 3-5/6″ or so…with the conversion factor of liquid to snow.

The Monday mess may be more of a factor the farther south of KC you go…but that remains to be seen right now depending on the track of the wave that is the key to the final totals (I know I keep repeating myself).

That wave will be the key to things…for the 100th time.

It’s taken awhile for December to get the snow machine going…but here it comes…2 waves…almost 2 1/2 waves of snow.

Tomorrow afternoon/evening will be messy and odds are schools are closing on Monday by the looks of things.

The snow may impact, not only the game conditions, but also the travel to and from the game.

It appears as though the 2nd wave of snow will be the more significant shot of snow is Monday tied to the actual main wave itself and this to me has made and makes the most amount of sense in the whole thing.

It’s premature…but in the end the model data will probably be split..with the GFS winning Sunday from earliest and the EURO winning Monday with the earliest ideas. To be fair though the GFS may overall have won this model “fight”. None perfect but perhaps the GFS will turn out to be better…and for me to write that is a rarity.

The system is now approaching the western US.

We’ll get back to that in a few minutes…meanwhile today is turning colder.

We had an expected 12AM high of 37° and are down into the upper 20s…and may continue to trail off today.

Colder air is flowing southwards this morning…temperatures are in RED…

It’s in the lower 20s in SE Nebraska this morning and with the clouds this morning we’ll continue to go down it appears.

There should be some breaks this afternoon…so we may level off after lunch and go up a couple of degrees.

Tonight is cold…teens to the lower 20s are likely especially if there are some breaks in the clouds.

Winter weather advisories are in effect locally…may get upgraded later today (at least for Monday)…since this is a drawn out scenario…in 2 waves…it’s complicated for the messaging.

Wave number 2 comes on Monday…this would be the main snow thump and could be an additional 2-5″ from the north to the south through the Metro area…so you see how the totals would add up nicely from the 2 days worth of snow.

This 2nd wave would be tied to the system coming into CA.

The model data this morning shows this and I can illustrate it for you by taking you up to about 18,000 feet or so…look for the “U” shaped dip coming out of the western US into the Plains.

See how it crosses the Rockies tomorrow by the end of the game…and comes right towards us. On the model at least that’s snow jackpot for the I-70 corridor…and hence the 4-8″ (maybe upside) to this playout.

IF the wave goes about 50 miles south…it could bring the higher totals more on the southside of the Metro…it does appear that the northside of the region towards the IA border and NE KS may not get much at all from this.

Areas farther south towards Sedalia and Clinton towards Garnett may have some wintry mix issues. It’s often just north of those “issues” that you get the heavier snows. So it will be a matter of following the wave on Monday coming towards the region.

So don’t let the official “winter weather advisories” let your guard down…this could end up being a 4-8″ event over a couple of days…lighter totals far north and south of the KC Metro.

Also don’t be surprised IF there is a noticeable lull in whatever is falling Sunday night…or perhaps some freezing mist or something…that will be the lull before wave #2…and again to reiterate for the umpteenth time…that 2nd wave is the key to the whole situation. Without it this is a nuisance snow on Sunday…with it it’s a snow storm on Monday.

This is going to mean a lot of long hours for the road crews/private contractors because it won’t be a one and done situation for plowing…it will be a two or three and done set-up…so it’s going to be tougher on them.

After this the atmosphere really wants to warm up for a few days but the snow will cut that potential warming significantly until we can melt it away. 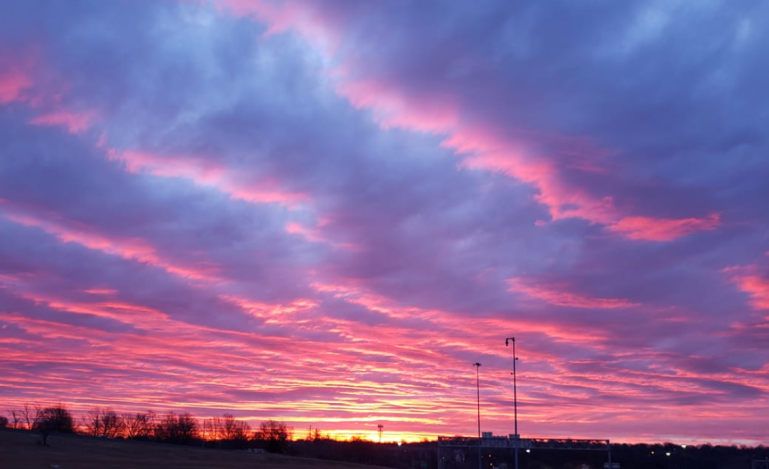