There is also smoke in the air from fires in NW Wyoming this morning. As usual I spotted this yesterday…it was coming behind the cold front that moved through the region this morning. I’m sure no one else noticed this…but I am always fascinated by this phenomena and am hyper sensitive to forecasting it ahead of time when I see it coming. Here is a tweet from yesterday.

There is a significant area of #wildfire smoke in central/northern NE that may move in FRI AM…if you notice a murkiness to the blue skies…its smoke from NW Wyoming. Also note the smaller areas in KS too! JL #fox4kc pic.twitter.com/7rHBpTZTdI

Today: Smokey skies this morning with mostly sunny skies this afternoon. Highs in the low>mid 80s with lower dew points compared to yesterday

Tonight: Clear and pleasantly cool with lows near 60° with 50s on the MO side likely

Saturday: Wonderful with highs near 80°

Sunday: Rain chances to start the day but hopefully drier in the afternoon. Tricky for temperatures because northern MO will be near 70° while areas south of KC will soar well into the 80s. Let’s go with around 80° for now and we’ll see how long the rain lasts in the morning.

Let’s start with Dorian…now making landfall along the outer banks of NC.

FLASH FLOOD EMERGENCY for the lower Out Banks, record waters levels washing over the islands from #Dorian. #obx #ncwx pic.twitter.com/wMYc2eugsu

It will be a brief landfall though…already moving away from the Outer Banks…landfall was officially at 7:35 this morning our time.

And there it is.

Table of North Carolina landfalling #hurricanes since 1950 ranked by minimum sea level pressure (with lower pressure meaning a stronger storm). #HurricaneDorian is in a tie for 6th place with Floyd (1999) and Florence (2018). pic.twitter.com/HoUufTZxCW

Pretty dramatic stuff happening there…and most of it isn’t so good.

The violence/strength/destruction of Dorian means there will never be another tropical system named Dorian. It’s name will be “retired” and removed from the rotating list of tropical names.

So that’s it for Dorian coverage…from afar it’s been a fascinating storm to track and write/talk about this week…if not longer.

I feel awful for the northern Bahamas…that’s the type of storm and destruction that will take years/decades to recover from IF they ever recover totally.

As far as we go…yesterday we hit 89° with heat index values near 100° but today will be more tolerable for sure as drier air and cooler air spreads into the region this morning.

The morning surface map shows lower dew points (60-65°) coming from the north to the south. They are the numbers in green below.

It will still be a bit muggy this morning as I talked about yesterday but you should feel a bit drier air this afternoon.

On the map above…looking at the winds (black lines) the front is essentially right around I-70 as I type this up.

The next potential weather maker comes early Sunday AM as some sort of front/outflow will be pushed southwards from northern MO convection Saturday late night. This will be the key to our rain chances to finish the weekend because there will be a low-level jet stream that will be overriding the front…that should help to create some additional storms/rain pushing the front southwards. IF the front does not get this far south in the morning…we may not get much rain at all…but the odds favor that it will. Odds favor some rain to start the day then hopefully a nice lull then perhaps some new activity later in the day or at night.

You can sort of see with the data this morning that KC is on the more southern edge of this…heavier north and lighter to the south. 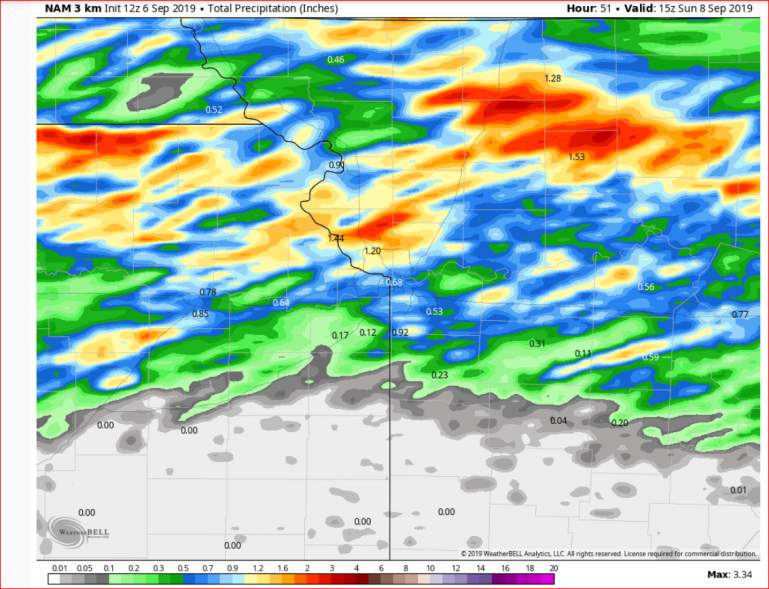 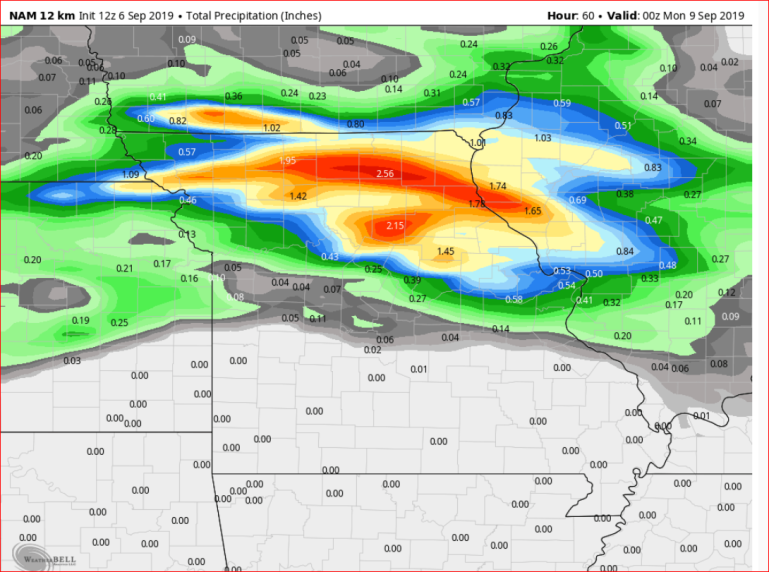 Some areas to the north may get some localized 1-3″ totals from this set-up.

This also creates a tricky forecast for temperatures on Sunday as rain cooled air will dominate northern MO and hotter air will be not far away to the south/southwest of KC in the afternoon. One of those weird days where you may have near 70° weather in N MO and near 85-90° weather somewhere south of the Metro…so I’m sort of splitting the difference.

Then we lurch back into the hotter air again towards Monday and Tuesday of next week.

By the way the average last 90° in KC is 9/15…the record latest is 10/30. So getting to 90° is still doable for awhile…and the overall pattern looks like it’s favorable for another run at 90° for a few more days at least. There will be some cold fronts in our future though and in time those fronts will start delivering stronger pushes of cooler weather as the seasons start to transition.

OK that’s it for today and probably the weekend too. I’ll be in the Olathe Old Settlers Day parade tomorrow…so no blog tomorrow…we’ll see about Sunday but no promises…I’ve written a lot for the last 10 days so I could use a day or two to recharge my blogging battery a bit.

Our feature photo is of the day is from the smoke this morning. From Julie Smith 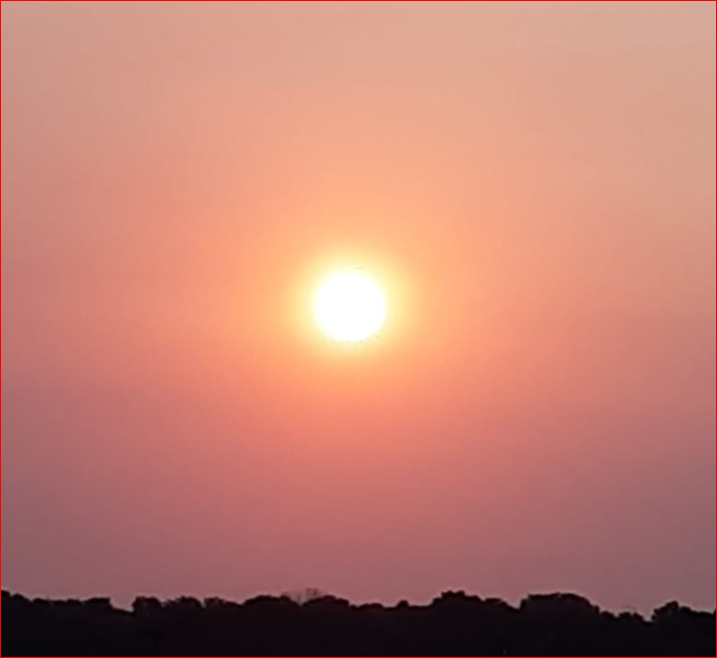