You can really see the changes now…these have been telegraphed for the past few days…but a classic fall pattern is shaping up right now for the early part of October…we’re going to get a taste of it later Friday into Saturday…then a more full on dose later next week it appears. Cold fronts and stronger high pressure areas will start to develop and move into the Plains as the seasonal transition begins in bigger doses into early October.

Overall the pattern is mild though with Saturday being an exception until this transition occurs…perhaps later NEXT Wednesday into Thursday…that timing I’m sure will fluctuate though.

Tonight: Mostly clear and cooler. Need to see if clouds form overnight though to prevent a total drop in temperatures. Lows in the mid 50s

Tomorrow: Should be a pretty nice day with highs in the mid 70s

Friday: Warmer then a cold front comes into the area. Rain will develop with storms likely in the PM into night. Some locally heavy rains are possible as well. Highs approach 80 or so…then drop off significantly in the rain cooled air.

Interesting morning out there with a front coming through the region this morning. Overnight lows were in the upper 60s…but we should drop below that later this evening and set new lows before 12AM. If not this would be a top 10 warmest low temperature for today’s date.

The map this morning shows the front moving south of I-70. 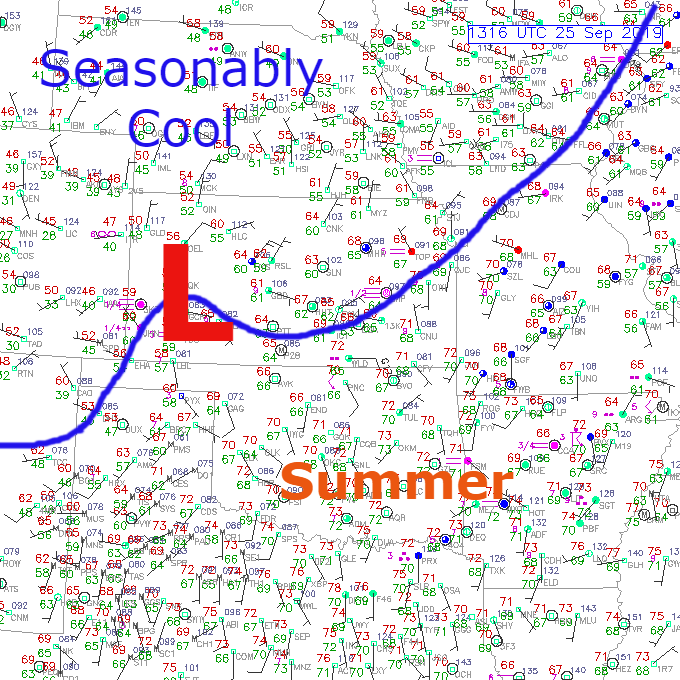 There just isn’t enough lift along the front to get much going…although a few isolated showers are possible I guess near the front SE of the Metro as the morning moves along.

The front should get south of I-44 this evening and stall.

It will then retreat northbound tomorrow night and bring with it increasing dew points into KC…so tomorrow night will be another muggy night it appears.

That sets up the next cold front…with more rain cooled air than anything moving into the area sometime on Friday. Dew points will again pop to near 70° while the temperatures locally are in the 75-85° range early Friday afternoon. Here is the hi-res NAM to give you an idea of the potential. The new data this morning has the front in here a little quicker…we’ll see about that but IF true then the highs below are too high for the KC Metro area. 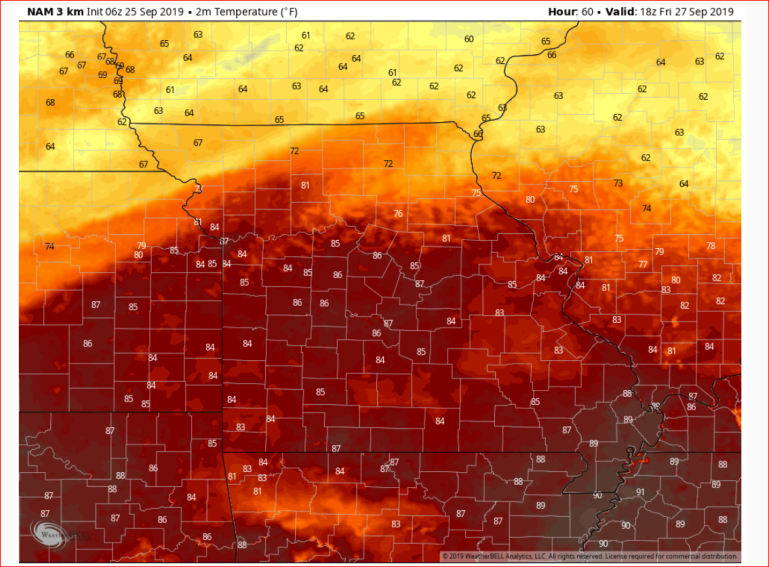 This front will be more of a slow-mover oozing type front and when that occurs…because of persistent south winds above the front…that typically means rain…and persistent rains at that into Friday night.

Also notice that Friday afternoon it’s in the 60s in NW MO…that rain-cooled air will come to us for the HS Football games…so it may be a breezy and raw evening for football.

The front will settle south on Saturday before stalling towards the Lakes region. Not far away…Saturday isn’t terrible but may be rainy at times…especially early on in the day.

The front then retreats north later Saturday into Saturday night and that should mean at least some more rain.

Then it gets muggy and warm again early next week…85° or so.

Now take a look at the forecast map for next WED (1PM)…and yes I know this is a week away and let’s use this map for what it’s worth a week away! 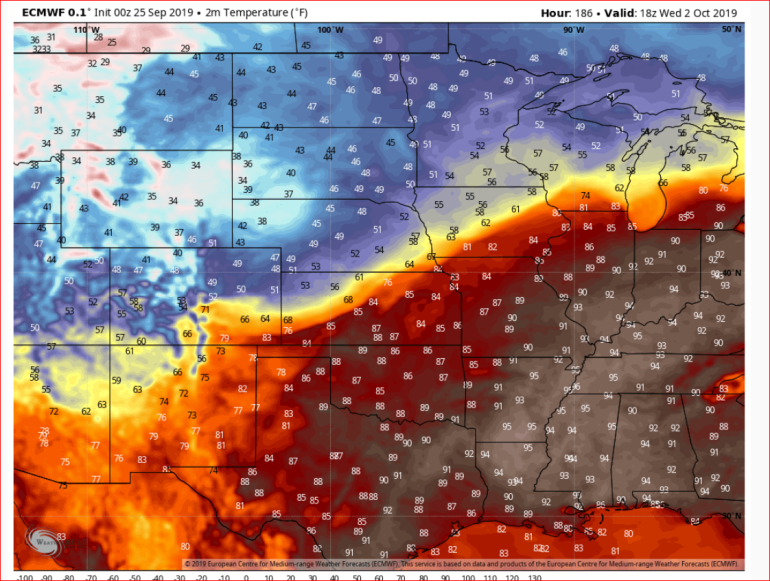 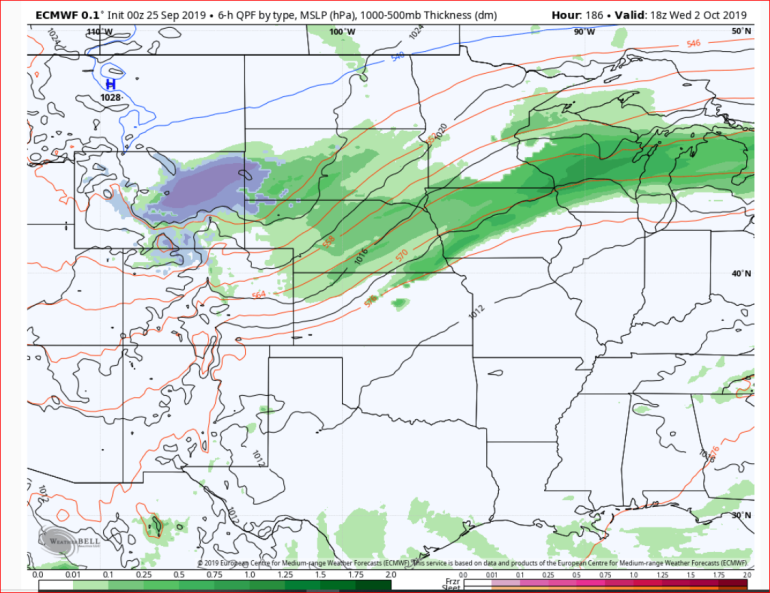 Boom…2nd day of fall and a nice accumulating snow in eastern WY. 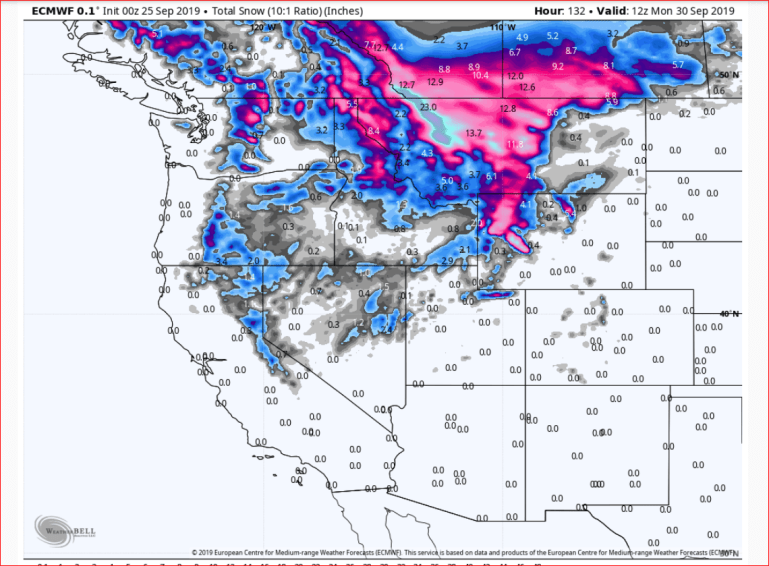 But the NWS out there is calling this an “historic” snowstorm…I assume for so early in the season.

Weekend #WinterStorm UPDATE: it looks like valley #snow is becoming more likely. Accumulations will be minimal, but for so early in the season, it will be a major impact, along w/all the other impacts we'll see. Suffice to say: this will be a historic storm. #mtwx #idwx pic.twitter.com/yRN6niqeST

So yeah…I’d say you can start seeing the changing seasons now in the US.

So that’s it for today…we’re on a bit of a roller-coaster for the next 10 days or so…which isn’t really that unusual for this part of the country.

Our feature photo comes from Cindy DiCianni from a couple of weeks ago! 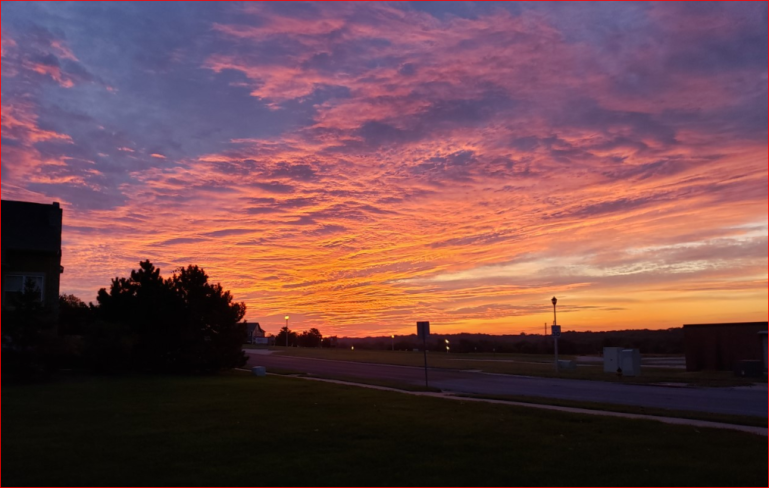 Facebook beefs up anti-misinfo efforts ahead of US election

Officer Mosher’s use of force in Overland Park shooting was justified, DA says