Hope you’re enjoying a typical summer weekend here in the Plains. Temperatures are about where they should be for mid July…and dew points are about typical as well. Overall…this is summer and it feels that way out there…so far not overly hot…and for now at least, not overly muggy.

That will change as the week moves along…and I have a Heat Wave ALERT in effect starting Wednesday and continuing for days afterwards as a somewhat more extreme summer heat develops in the Plains…nothing that we’re not used to but I do think we’l see several days of temperatures near or above 95° coming…and the maps today aren’t too crazy about any cool downs either at this point for quite some time.

Tonight: Fair skies and seasonable with lows near 70°

Monday: A few more clouds with a chance of a few storms SE/E of the KC area…more towards the Lakes and central MO. Not as hit with highs in the mid 80s

Tuesday: Partly cloudy and warm with temperatures again in the mid 80s

What’s left of what was briefly hurricane Barry is now moving through the southern US. Barry was a hot mess really…Im not even sure what it was to be honest with you. The Hurricane Center upgraded it to a hurricane right before landfall…but you really can’t find and surface sustained winds at 74 MPH or higher with it..a.t least in reported stations.

Heck…at least onshore or on the surrounding barrier islands you can’t even find any wind gusts to 74 MPH. 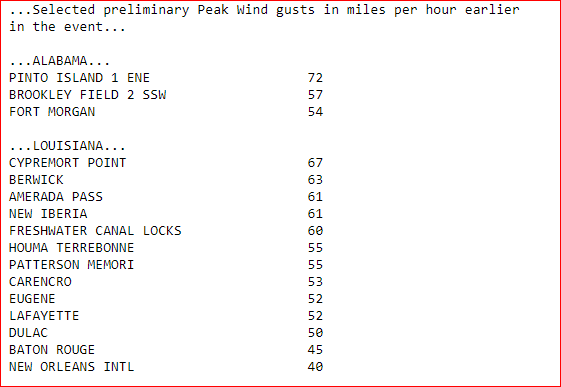 Could something have happened between somewhat data sparse locations in S LA…sure…but that storm never looked right from the get go…it was almost always being sheared apart and it actually to me resembled more of some sort of weird hybrid between a MCS (Mesoscale Convective System) like what we see here in the Plains and some sort of tropical system.

Anyway…it’s still bringing the rain…and even some tornadoes in some of the rain bands. Flooding is the issue. Always has been and will be as Barry falls apart over the next couple of days.

That’s a lot of water falling as everything translates from the south to the north and it’s a repetitive rain as well.

Jackson, MS is in the center of the Doppler estimates above.

Forecasts are still pretty bullish with the rain from Barry…

Especially along the MS River region into SE MO and western TN.

There have been some tornado warnings in a few of the ells as well which is not that unusual with these types of systems.

About the only tangible effect from Barry locally is some cooler air coming up from the south…so maybe Monday and Tuesday aren’t 90°…maybe only around 85° with some bonus clouds as well. There rain chances aren’t very good locally…maybe something somewhat isolated locally. The chances are a bit better but not a slam dunk for areas E/SE of KC.

The main weather story though, Barry aside, is the likely heat coming back towards the area starting Wednesday. Temperatures are going to get hot…so far this year the hottest we’ve been is 93° @ KCI and I think 96° Downtown. We may add 3-5° to all those numbers as the week finishes. That would put KCI between 94-98° and Downtown between 98-100° give or take

So it’s going to get hot.

So that takes us roughly to the last week of July…

The GFS has a front in the area on Friday of this week…the EURO does not…I have my doubts.

Heat domes of this type don’t like to break down that easily.

The bottom line is once it gets hot…it will likely stay hot. we’re going to really start baking out the moisture as well from the terrain. For the farmers that need the rain now…it doesn’t look promising for the next 2 weeks for anything widespread.

Our feature photo is from Joseph Porey‎ out towards Holton, KS from the big storms the other day…again a textbook shelf cloud. 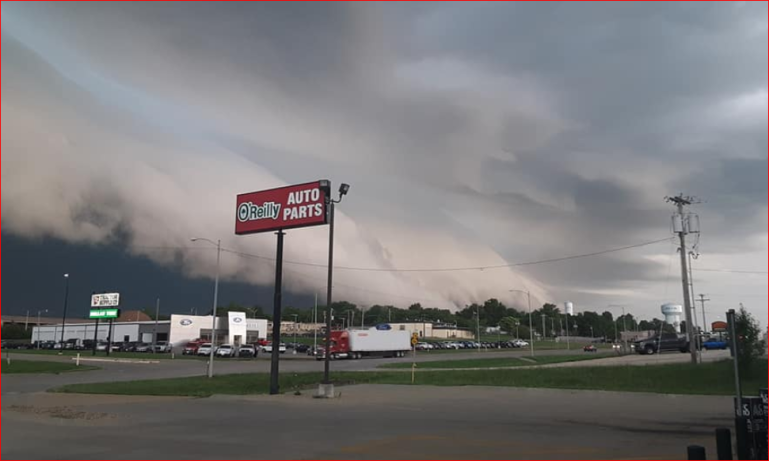