It’s inevitable really in the world of weather…seasons clash especially in these “transition” times. Perhaps days like today would be more common a couple of weeks ago…but this weather has been so unusual really…it’s not that it was warm for a few days…but it’s that combination of high dew points (near the highest they’ve been for late September into October) in the last 40+ years…the winds, which have been persistently high for several days…and the gradient in temperatures which is barely moving but in time today/tonight will sweep through the area and usher in true fall temperatures.

Yesterday was a frustrating day for me because you could see how today was going to be a “weird” day. A front dangling in the Metro with a rather significant change in temperatures from the north to the south…somewhere in the viewing area. Confidence was high that northern MO would be cooler and areas south of KC would be warmer…no problem. The issue and the frustration on my part was how the Metro was going to be set-up for the day…where would the temperature gradient set-up…and to top it all off the gradient would be moving north or south as the day moves along…challenging to say the least.

So basically I had this overwhelming feeling that I was going to be wrong today for parts of the Metro regardless of what forecast I made…and I hate that feeling. It will happen again…usually about 5 times/year where the details of a forecast can’t really be honestly figured out because of a boundary that will be hanging around wavering north and south.

Today: Scattered showers this morning otherwise variable clouds with new storms popping later this afternoon, after 4-5PM, and then moving away. There will be a risk of severe weather with the storms later today in at least part of the area…especially south and east of I-35 into the MO side. Locally heavy rains are possible with these storms. Highs today are ALL over the place…let’s just go with 80-85° with near 90° SE of KC and near 65-70° north of the Metro.

Tonight: Everything moves away and MUCH cooler air flows into the area. Morning lows will drop into the upper 40s to near 50°

Friday: Increasing clouds…there may be a few light showers out there too. Highs only near 60°

Probably should mention this…I’m going to be taking some time off starting on Friday…I may get a blog together on Friday AM…but after that don’t expect any blogs for about 10 days…you can always reach me on twitter (@fox4wx).

My goodness the heat…

We missed a record yesterday by 6° which really isn’t that close but it’s somewhat interesting…here are the hottest days for 10/1. 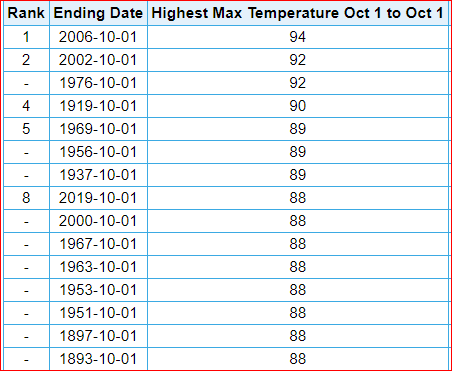 I mentioned how warm September was…6th warmest in record data going back to the 1880s…I was asked on FB from John about a weird thing he noticed about the month…no 40s for lows…and he was right…it is unusual..here are all the years that we never dropped into the 40s for lows…about 12 previously to 2019. So it happens once every 12 years or so. The last time was back in 1998 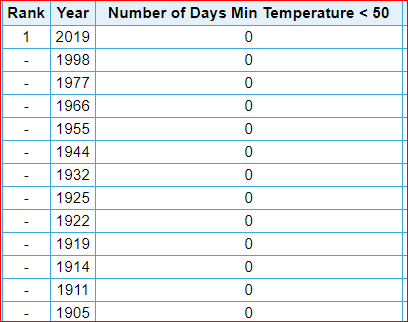 Just a weird September and a weird start to October…

This morning we dropped to at least 64° and we’ll be below that towards midnight tonight with the front moving through.

So about that front… 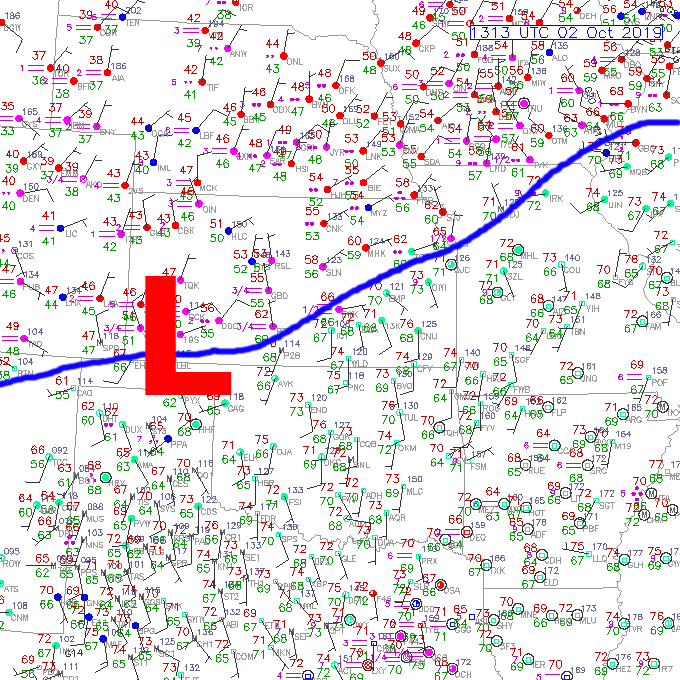 Note the temperatures…in red above, 40s in NE and NW Kansas…70s out of the front from I-70 southbound.

Here is the closer view…the battle of seasons is right on top of KC! In the next map the temperatures are in black… 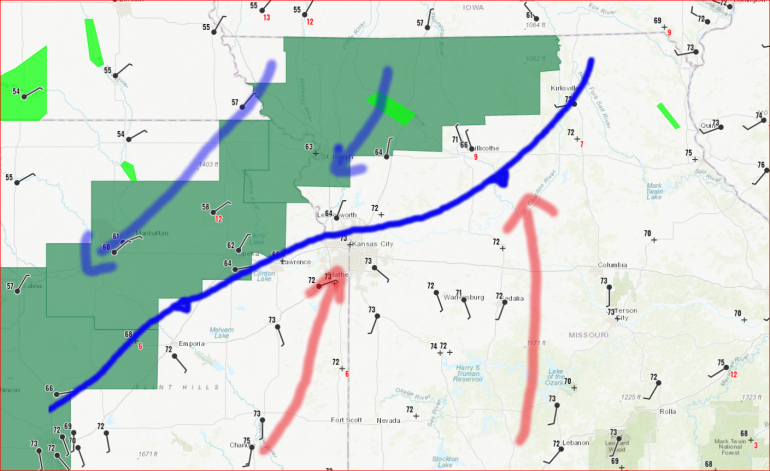 BTW the green counties are still under a flash flood watch.

You can see just how much the weather changes with the front…this next chart is a look at how the temperatures changed from 8AM yesterday to 8AM this morning. Those are 20-25° changes on the down side just NW of KC…it’s coming! 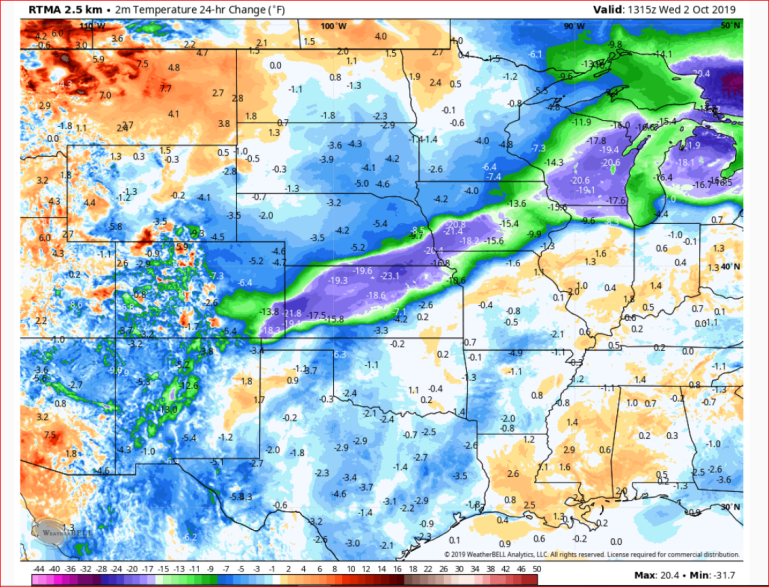 With the boundary in the area…we’re seeing rain north of the boundary…and that reinforces the colder air north of KC.

Notice though most of the rain is mainly N & W of the I-35 corridor as I start this blog this morning. That rain up there will keep that air nice and cool today.

Areas south of the rain though will heat up…

The HRRR model has this idea for this afternoon… 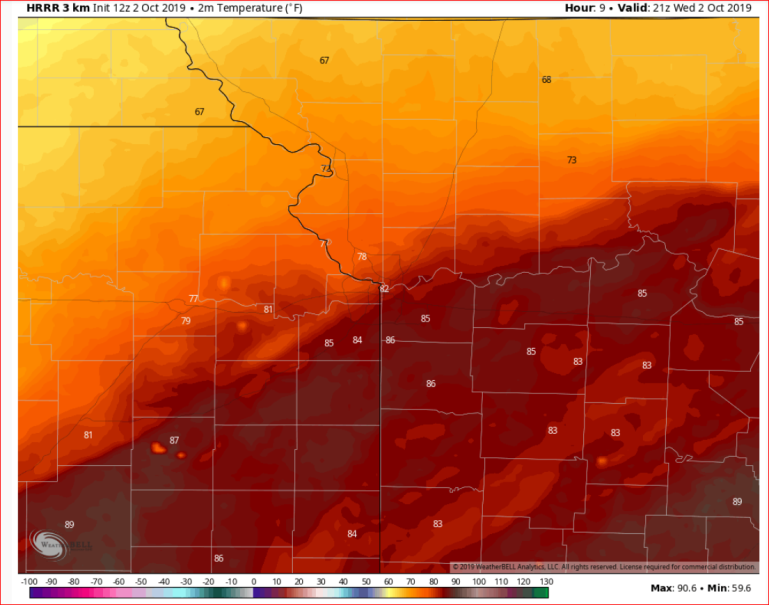 Now fronts that separate summer and fall…should light up at some point with storms…and I expect that later today as we heat into the 80s, especially from the Metro southwards.

Here is one of our short term models called the HRRR…it should auto-update for you through the day.

weird things can happen…and my thought is IF that surface low is nearby…sometimes there can be enough spin in the lower part of the atmosphere that the storms may rotate…I’ll be watching for this…hopefully I’m being overcautious (probably) but as I said last night…when you have weirdly warm weather…and it’s going to change on a dime…weird things can happen.

Once those storms move away…the cooler air will flow in unchecked and we’ll really fell like fall tomorrow morning and for the next few days.

This cooler air will continue east into the eastern part of the country…which will mark the end oft the bizarre heat they’ve had as well…we’re talking all time highs for October yesterday in many areas.

A staggering amount of October MONTHLY record highs were tied or set yesterday, including the list below. Some monthly records are expected in the Mid-Atlantic today, and some areas of the South could reach or exceed the records set yesterday! pic.twitter.com/fo4yQgZ0wj 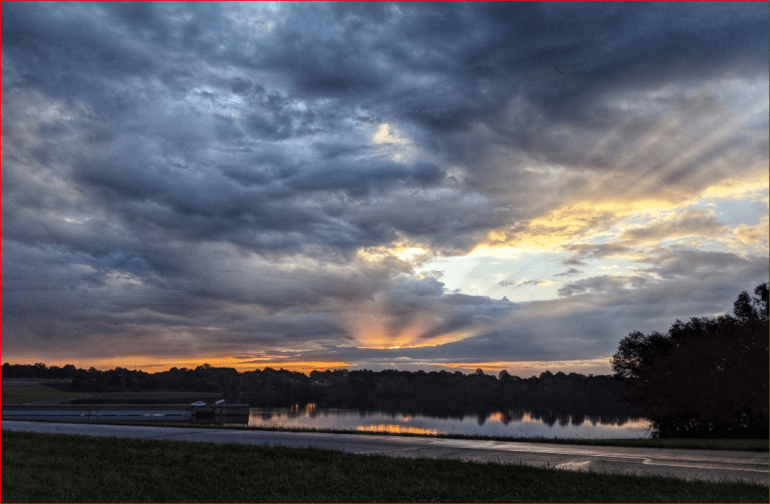 Man charged with murder in double homicide at 47th and Sterling