And so it begins…

Actually a 20% chance of snow 6 days out would hardly be worth a real deep mention on a weathercast…but there I was last night talking about the snow potential Sunday>Monday. Typically I wouldn’t spend much time on the air, at least getting into that part of the forecast, but in a sense there really wasn’t anything else to talk about aside from up and down temperatures…so there I was last night making some special graphics showing the potential of something or nothing at all.

Up and down temperatures over the course of a few days is something that weather apps can tell you…and you know how I strive to tell you about something your weather app won’t dive into…so that’s why we flew out to the Aleutians and that’s why I wanted to show you two different models side by side with different solutions…mainly because I don’t want you to get too worked up about this right now. I love snow and I’m not overly excited at this point…sure it may snow…but there are a LOT of things that could prevent us from getting anything significant from this.

It’s something to check back in on in a couple of days…its something that I’ll write and talk about on the air because there isn’t any real moisture coming this week.

Today: Variable clouds and cold with highs near 32°

Tonight: Fair and chilly…another drop this evening then steadier overnight temperatures later on. Lows in the lower 20s

Wednesday: Seasonable with highs in the lower 40s

My feeling is that the only way we get snow on Sunday into Monday is the set-up on Saturday. What do I mean?

There is going to be a cold air mass nipping at us on Saturday and that needs to come through to help with the set up on Sunday into Monday. IF that doesn’t come through…the snow situation is even more precarious.

I think what happens on Saturday is a somewhat arctic front slides through…I have 36° as a forecast but likely this is too high…I think it may be colder than that and take a look at that later today. The reason why we need it to be colder on Saturday is that set’s up a temperature gradient for Sunday…especially aloft.

That temperature gradient aloft set’s up in an east to west style through KS and MO. That’s at least a step in the right direction for snow later Sunday and/or Monday.

Without that gradient set-up…I’m not sure we can get much snow locally. Also of note and something that will be delved into more later in the week…is that when the cold air comes in on Saturday morning…it will, in time be dry air. That dry air settling in may chew on whatever comes from the west to the east towards us…again another wrinkle.

Finally everything could be farther south of here giving us very little at all. IF the temperature gradient in the atmosphere sets up more towards southern KS…most of whatever falls will steak south of the region…and the northern edge will be chewed on by the dry air seeping south from the colder air mass coming in. 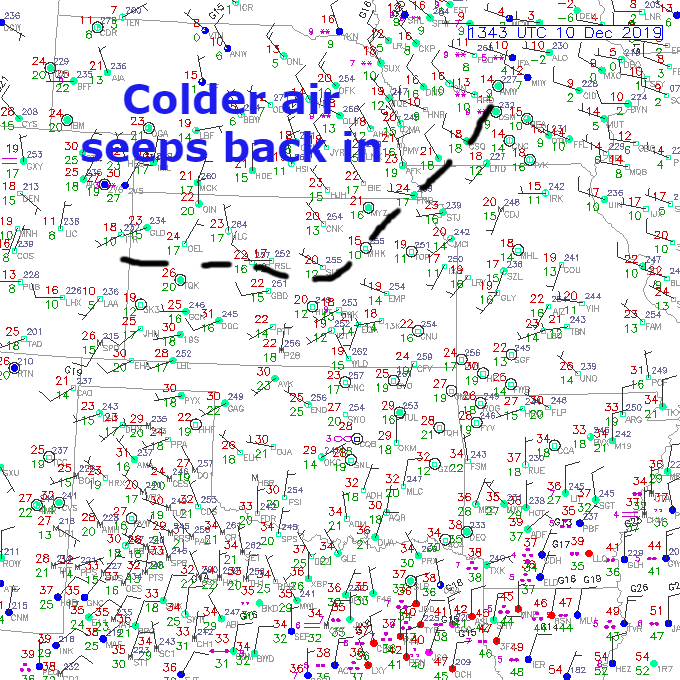 In the above map…temperatures are in red…

That shot of chilly air will be pushed away overnight on strong winds aloft. That means we should in be somewhat better shape to warm-up on Wednesday into the low>mid 40s.

Thursday and Friday will be warmer…50s are likely.

Then on Saturday we get a fast moving disturbance come through the region…this means that the colder air comes in (we may have some sort of 12AM high that day) and during the afternoon we’re down into the 20s and you add in the wind…and it will feel colder…there may be a few patches of snow out there on Saturday too…somewhere.

There will be a chance after the game into the overnight Sunday and perhaps Monday though and that will be connected to everything falling into place correctly and the atmosphere saturating yada yada yada.

I won’t get anymore into that right now.

Of another interest…after the wave passes through…e’re going to warm back up next week it appears…we’ll see IF we have snow on the ground…if not though…50s may return fast during the middle of next week. The cart below shows the temperature probabilities…the core of the most likely area of above average temperatures is on top of the KC region…not a good look for snow lovers but a good look if you want some milder air heading into the last weekend before Christmas perhaps.

So a lot on the table it appears…from roller coaster temperatures…to a snow potential to a decent warm-up potential in about a week or so depending on what happens with the snow potential…so lots of layers to figure out.

Our feature photo comes from Barbara Stanton‎ from the sunrise on Sunday. 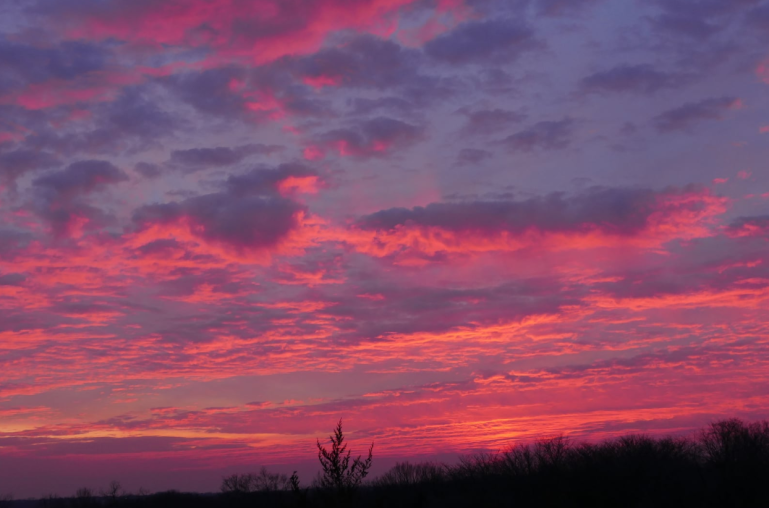