Good Sunday…it’s warm and humid but we’re in the process of salvaging the backside of the holiday weekend with drier weather these last couple of days and there are decent signs that today will be dry for the vast majority of the region.

Next week will bring a couple of opportunities to the area for rain…Tuesday looks to have the best chance…and then we’ll see drier weather it appears for most of the week.

Tuesday: Storm chances with highs in the 80s

Wednesday: Not too bad with highs in the 80s

The storms and torrential rains that we dealt with on Thursday night (the 4th) and created 5-10″ of rain for parts of the area came about because of an slow moving MCV. That is short for Mesoscale Convective Vorticity that is basically a wave generated from clusters of thunderstorms.

I’ve talked about these in the past and looking at satellite pictures during the summer, you can often find these little areas of “rotation” in the satellite loops. They always need to be tracked because sometimes they can create new areas of storms and change the weather as they approach.

One of these moved through the area on the night of July 4th and got it’s act together on the MO side. Well it didn’t just fade away…it’s been slowly holding it’s own for the last few days and is now located in the TN valley. It’s been pulsing up and down for the last couple of days.

You can see it up in TN…

That thing will continue to pulse and create storms for the next couple of days as it may drift southwards through the process. Here’s the fascinating thing though…as it gets closer to the northern Gulf Of Mexico…our model data suggests that it will in time get along the coast of the northern Gulf. From there…with the super warm waters of the Gulf just sitting there…it may actually start to attain some tropical characteristics and become something more noteworthy down towards NW FL or perhaps along the S AL/MS/LA coastline.

It will take a couple of more days to get down there…but here is a look at one of our models…showing this potential developement into something. 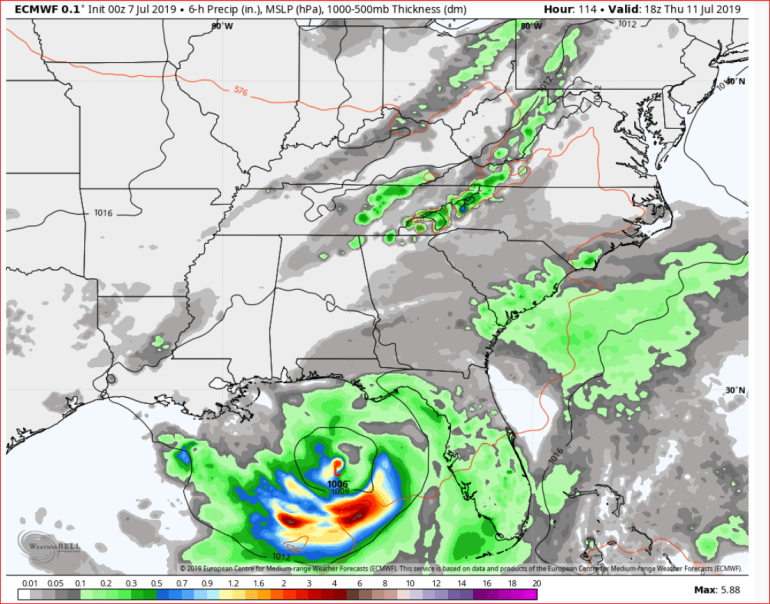 See it down there off the coast of NW FL?  We’ll see whether or not it’s just model “fantasy” but that would be something of a rarity for a disturbance that sort of really came together Thursday night in our part of the country (and you can actually trace it farther west towards KS before Thursday night)…and meandered all the way towards the Gulf region and potentially turns into something tropical.

I won’t say that’s a 1st…I’ve seen these thunderstorm clusters do this in the past…but I don’t remember any of them coming from the Plains to do it in the past.

I got an interesting message from a soybean farmer in Northern MO the other night…curious to know whether or not a drought was trying to settle in. Of course this is an area that has received a ton of moisture this year in the form of snow and rain. Terrible flooding was the rule up there through May…but yet here we are with suddenly dry conditions taking shape up there at a time when the crops that were so late to get planted need a drink of water. I told him that something was likely…initially I thought on Monday but it may be more Monday night or Tuesday but I wanted to look and see what was happening up there.

Sort of interesting over the past 30 days…note how things have dried out in parts of northern MO towards the IA border region. 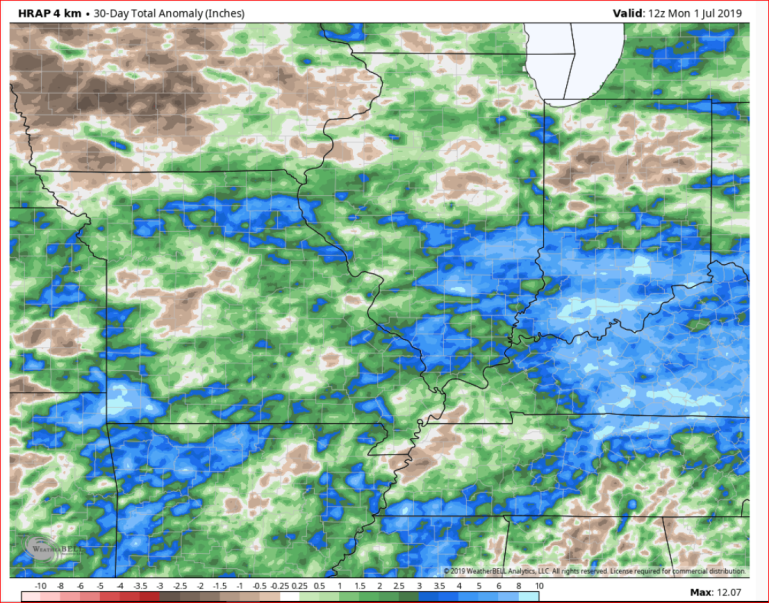 I don’t want to say it’s a widespread issue up there…but there is definite dryness for a few of the counties…the map above shows the 30 day anomalies…the one below shows the last 14 days in terms of amounts.

St Joseph has only had .06″ of moisture since the 24th of June…so that’s a pretty solid 2 week stretch (and growing) of not a lot of rain up there while other areas have obviously been pounded.

I do think some rain is coming for them this week…but overall the pattern isn’t overly wet so hopefully they get the rain Tuesday. Here is the 5 day forecast totals through later Thursday 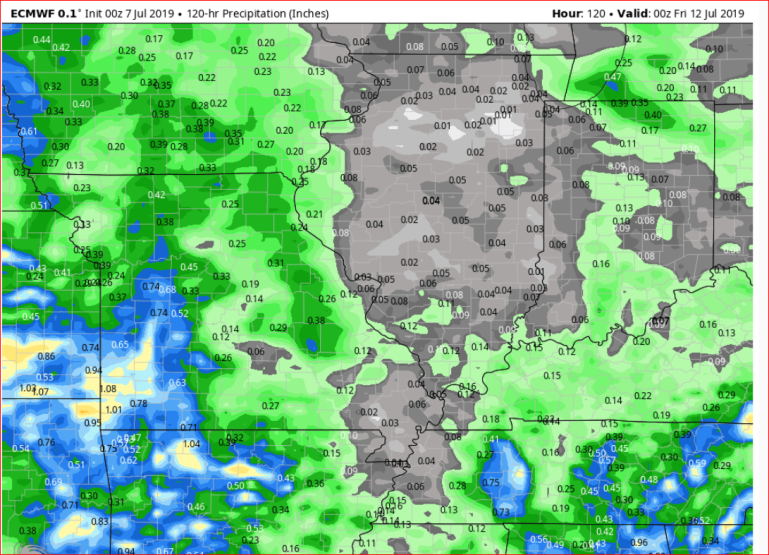 Beyond that there is not a lot coming after Wednesday it appears. 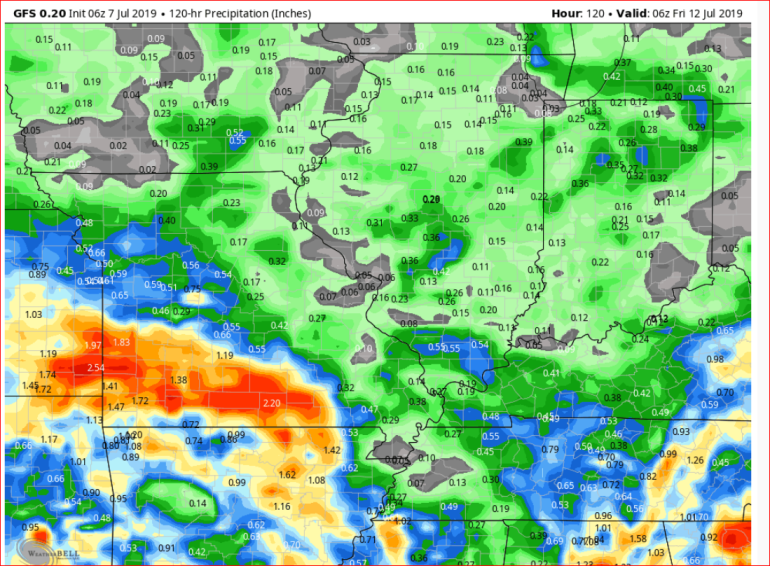 This rain scenario is tied to one of these remnant MCVs that is down towards the southern Plains and will be coming up through the western Plains tomorrow and spreading this way into Tuesday. It doesn’t take a lot to get storms to form during the summer when you have all this moisture in place. As a matter of fact there is the potential of near record amounts of moisture in the atmosphere locally on Tuesday…that combined with a disturbance coming towards the region would create some real heavy rains in parts of the area…and IF things play out…I wouldn’t be shocked with more 2-3″ totals…although it appears that the storms will be moving as opposed to being slow movers on Tuesday…but that would be the day of potentially heavy rains in some areas…if we can time everything out right.

Hopefully the farmers up there get the rain they are wanting (at least in some cases).

Have a great day and enjoy the rest of the weekend. 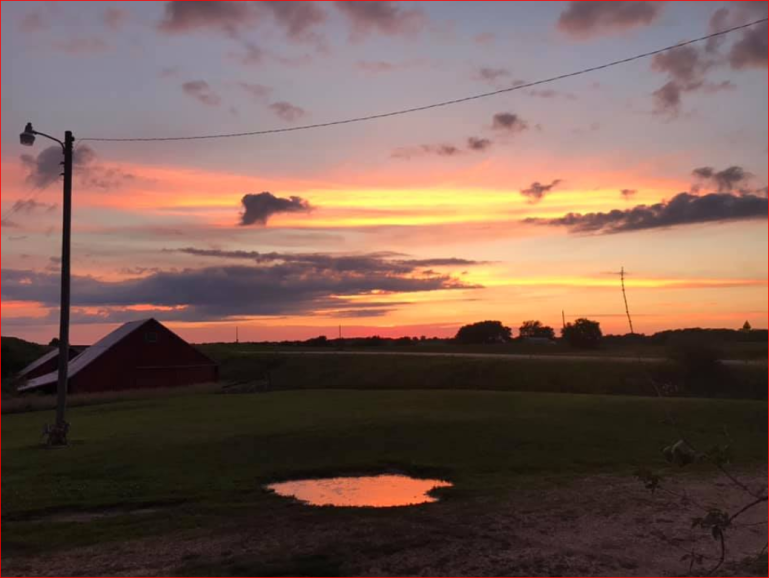