The month of March is rapidly fading away and after a chilly day today (by comparison to average) we’ll be around average Tuesday and then nicely above average heading into the end of the week. A rather typical spring Plains storm will be the major issue this week. Ahead of the feature we warm-up and then behind we turn colder. Gardener’s take note… there is a likely hard freeze coming Sunday morning. This too is very typical.

Today: Lots of clouds with some breaks showing up during the afternoon hopefully. A real struggle to warm up with highs 50-55°.

Tonight: Variable clouds and cool with lows well into the 30s

Tuesday: Still fighting some morning clouds but more sunshine is expected with highs 55-60°

Wednesday: Warmer (warmest of the year) with a lot more wind. Highs near or even above 70°.

As we dive farther into the spring season a bigger clash of air masses occur. This is driven in response to the increased daylight, the season itself, the higher sun angle, the retreating jet stream and a bunch of other things. The air towards the south gets warmer and warmer, and more humid. The air to our north is still holding on to some winter characteristics, but those are gradually fading away. When a storm moves into the middle of the country, the two air masses start to come together. One drawn farther south, the other farther north, and we can get some rather powerful systems, and wet ones, too.

As we head to the end of the week this is forecast to happen. We are expecting a nice warm-up… the a sharp cool down. The other common aspect of these systems is the wind. Spring is the windiest time of the year here in the Plains I think… and this week that will be a “thing”. I’m expecting 25-40 MPH gusts on Wednesday and Thursday. That allows the warm air above us to “mix” down to the ground and it also allows moisture from the south to work it’s way northwards.

I sort of illustrated both those things yesterday in the blog and there have been no changes with regard to that.

Systems like these, and even for the one yesterday do have severe weather with them. Yesterday storms lit up in SE NE and there was even a report of a brief tornado SSW of the St Louis area. There were other hail prolific storms in Texas and the DFW area, which seems to be getting bigger and bigger hail storms over the past few years got hit again last night (or at least parts of it did especially on the north side).

Were you keeping track of the damaging hail event last evening in the northern DFW Metroplex? Here is a preliminary review of Denton, Collin and Rockwall Counties in Texas. Many other areas from Texas to Missouri experienced damaging hail yesterday. #txwx #hailstorm pic.twitter.com/iq2BXyzBmq 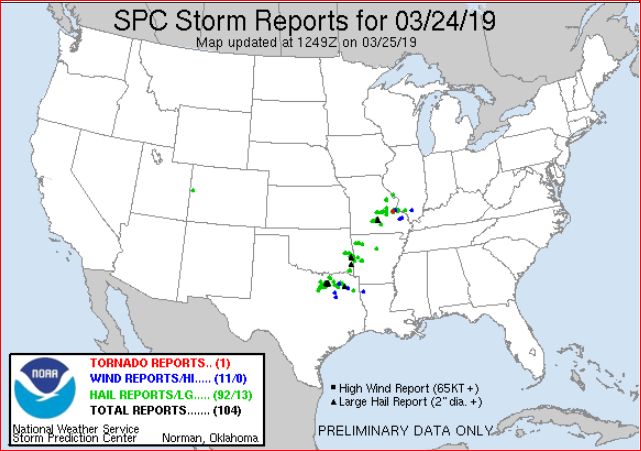 So the seasons are changing and the weather is responding.

The next storm for us has slowed a bit over the past couple of days. So as a result this will be more of a Thursday/Friday thing mostly. The risk of stronger storms, even locally, isn’t out of the question on Friday especially…although there may be a strong storm or two around even on Thursday. Yesterday the weaker cells that moved through after daybreak actually created some small hail up towards Excelsior Spring and the Kearney area. So it doesn’t take much to get some hail at least.

I could see how that could happen on Thursday in whatever forms and zips towards the NNE or NE. How will this affect the Opening Day forecast. Well as I mentioned yesterday it may not be perfect out there, especially into the early afternoon…and I can’t promise perfectly dry weather. Some storms/showers should be around the area…but since whatever disturbance that will create that activity doesn’t exist (the main storm does…the small scale features doesn’t)…it’s impossible to say IF the I-35 corridor will be a target or not. There should be some activity the issue is how widespread is it…and will the “K” area be a target or will it get a glancing blow.

While we know the set-up is there on Thursday the devil in the details part is still to be worked out.

Then on Friday a more traditional severe weather set-up may establish itself in the Plains area…and we’ll ahve to watch that more carefully. There will be a lot of wind shear out there. Mostly in the “speed” department. This is when the wind speeds increase with height. Also somewhat in the direction department as well…this occurs when the winds gradually turn from the SE/S to the SW or even W. This gets the atmosphere boiled up and capable of producing severe storms with enough instability. There also may be a surface low somewhere  out there in eastern KS…that too gets the severe weather engine primed.

So it’s worth watching that risk as well.

Here is a look at the EURO forecast (and this may change a few more times) of a potential scenario for Friday. 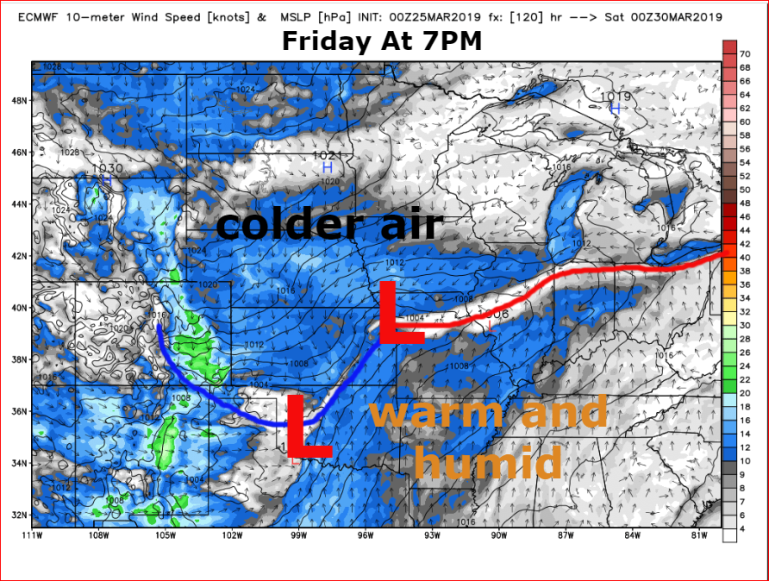 There will be colder air to the north of this system which may create snow somewhere towards the north of KC at some point…that too should be watched…but it’s a set-up that should be monitored.

Early spring set-ups though are somewhat tricky…there are usually issues with just how much moisture is present and the features have to be somewhat well-timed to maximize the instability. There is a question about instability as well in terms of will there be any advance type stuff to mess up the atmospheric set-up when things are more ready to pop. Just way too many questions but something to pay attention too later this week.

Regardless this weekend will be colder…especially Saturday into Sunday morning and the risk of a hard freeze is there on Sunday especially…maybe Monday too.

Oh and I wouldn’t be shocked if snowflakes aren’t too far away from us at some point Saturday AM with the colder air rushing southwards.

Finally a note about the “name” of the blog. If you’re observant you noticed I changed it to Joe’s Weather World. The reason for the change is that I have a podcast by the same name…and there was thought about putting everything under the same “umbrella” if you will. So there is the change. For now on Joe’s Weather Blog will be “Joe’s Weather World”.

If you want to listen to the various podcasts that I’ve done…including the most recent one with my colleague Andy Bailey from the NWS (concerning the role the NWS plays in the weather enterprise) feel free to check out this link. Hit the play button and you should be good to go.

They should start to get updated about twice per month or so as I can think of other things to talk about. I’ll attempt to get guests to join me too…I think the next one will be with our newest meteorologist Garry Frank who debuted this past weekend and formally takes over my shift this coming weekend. You’ll see him every so often on the evening shows too…perhaps doing a live shot or a 5 or 6PM weathercast.

Our feature photo comes from Jeff Milan up towards Parkville of the flooding that has been happening. 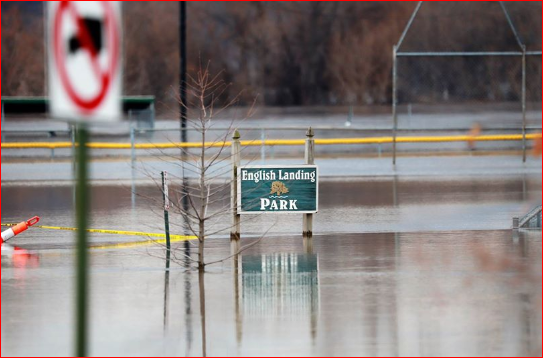