There are things we know about the weekend and things we don’t. We know it will rain. We know it should rain a lot. We know that the heaviest part of the storm will come later Saturday night into Sunday AM. We know there will be thunder and lightning. We know that some areas may be vulnerable to flooding. These are virtual givens.

The main things I don’t have a lot of confidence in right now is how much and how long we have rain during the daytime tomorrow…and when the rain finally ends on Sunday. Will it be during tailgating…kickoff…by the end of the game? This part of the forecast depends on the timing of a cold front which really doesn’t exist yet and how well the organized area of rain moves…which won’t exist till tomorrow night. So as I like to mention from time to time…forecasting things that don’t exist…that’s not easy sometimes.

Data has varied in the ending times of the rain…from late Sunday to near kickoff to the 2nd half…to somewhere in between. This is complicated obviously for the game and for the fan experience. We may not get a full grasp on this till tomorrow night really when things come together.

Today: Mostly sunny through early afternoon then turning cloudy and warm. Highs in the mid>upper 80s. Rain/storm risks increase after 4PM coming up from the southwest. Muggy as well.

Tonight: Mostly cloudy and mild with lows in the upper 60s

Saturday: Occasional showers with several notable dry periods. Just an iffy day to try and get something outdoors done. I don’t think it will rain all day though. Highs closer to 75-80°

Sunday: Rain/storms AM ending at some point in the afternoon. It may end in time for the game or during the game. Highs will be in the 70-75°

Sometimes weather does that…it gets complicated and layered with potential pitfalls and that is the weekend forecast.

At this point I wouldn’t be surprised if tomorrow ends up doable in terms of the weather for a few hours at a time…and if Sunday ends up not so great. Nothing about this weekend is easy to time out to perfection. All I can say is be prepared for rain both days…and that may include the Chiefs game as well.

The complication is many fold but there are ingredients that I’ve written about this week that are going to come together for heavy rains…hence the Flash Flood Watch that is in effect for a good part of the area…those are the counties highlighted in darker green.

Note the river flooding that persists for some of the MO River.

See the darker green…that's a new Flash Flood Watch for Saturday night into Sunday. The AMAZING(!) part is the flood warning for the MO River east of the Metro. See it? (light green). That area has been under a flood warning now for 194 STRAIGHT days! (h/t @NWSKansasCity ) JL pic.twitter.com/sf6MBmYCG9

So there is pretty high confidence in a lot of rain coming. Model data supports this as well…as it’s indicated for days now. Nobody will be surprised, hopefully by 1-4″+ of rain in the region.

Here’s the thing though…by later tomorrow afternoon some parts of the area will be like…”where’s all the rain”? Just be patient.

Here is the EURO data… 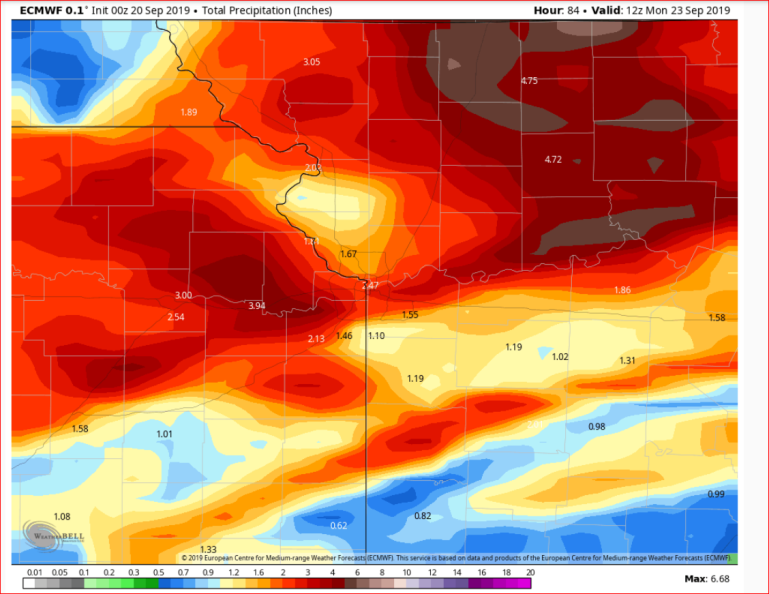 Here is the GFS… 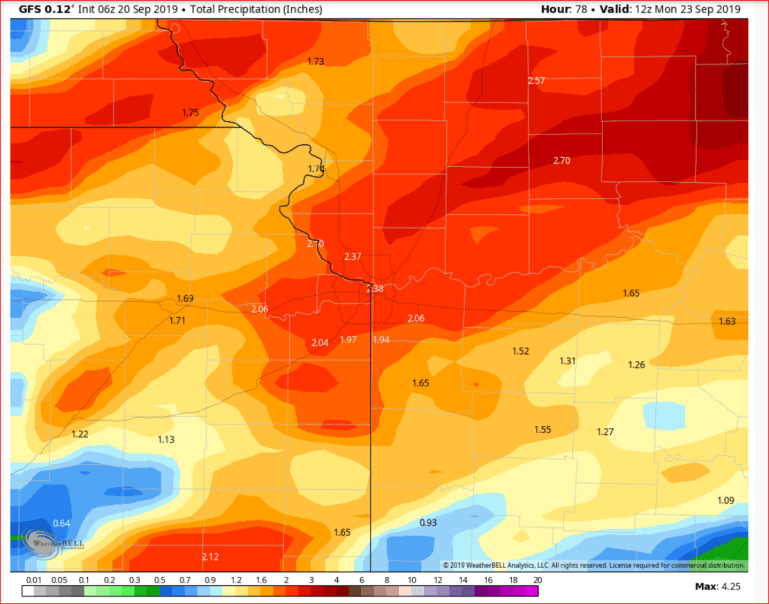 This is all through Monday morning.

Most comes Saturday night into Sunday.

The Sunday forecast is a headache for obvious reasons (the home opener for the Chiefs game). The overnight data is mixed with a front coming through by 3PM on the GFS…by 1PM on the EURO…by around 1PM on the overnight NAM. That frontal passage will be a key to the forecast on Sunday. It will be pushed by the heavy rains/storms generating a rain-cooled atmosphere.

Look at these near 9AM temperatures from this morning… 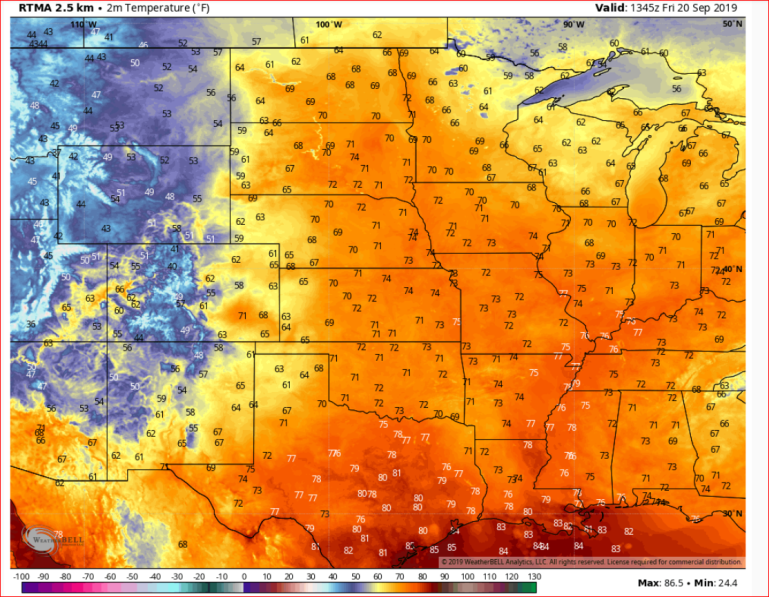 70° morning temps all the way up to the Canadian border region. 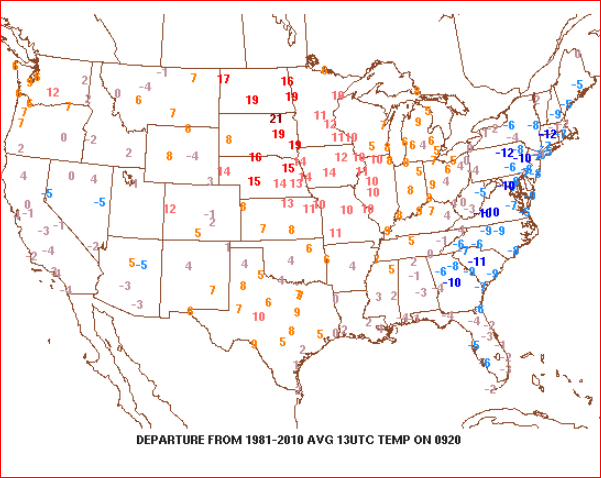 Note the cooler than average temperatures back east.

Moisture aloft is also streaming up from the southwest….

Within that moisture are small disturbances that will help to generate areas of rain…starting tonight in the southern Plains area. Those move towards the NE in the flow aloft.

So a lot of atmospheric moisture + disturbances coming towards the northeast…that is the set-up for tomorrow. Waves of rain then breaks.

A cold front will come together tomorrow in the Plains and slowly push eastbound. This is the set-up for tomorrow night into Sunday morning…with heavy rains VERY likely in that time frame. This continues at least though tailgating…perhaps even longer.

So the changes today are a slower frontal movement by a few hours…that is no good for the lead-up to the game. With this scenario…lighting could also be an issue as well. It may flat out be pouring Sunday morning for several hours at least.

The issue is will it end by Noon…or 3PM?

Monday is the 1st day of fall…looks wonderful with highs well into the 70s to near 80 after a cooler morning with lows in the mid>upper 50s!

Our feature photo comes from Kim McMullen‎ driving west towards Colorado with rain all around her she said. Taken yesterday! 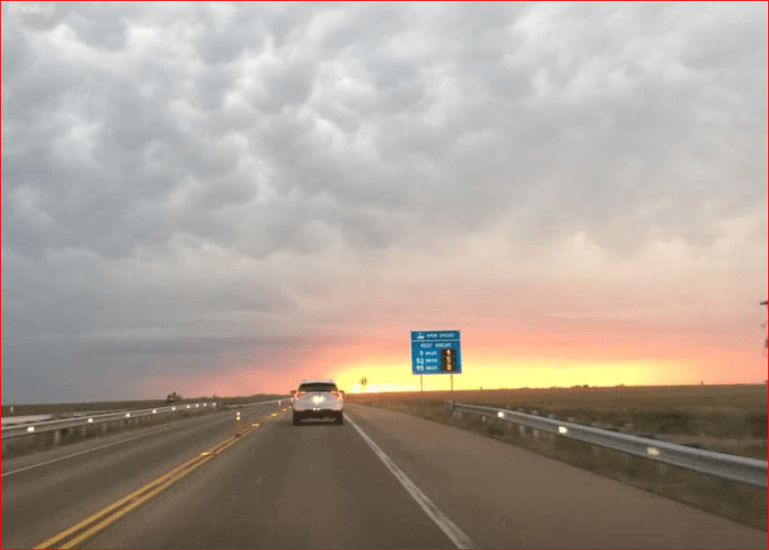