It’s a pretty start to the day around the region…some clouds out there but also quite a bit of filtered sunshine too! The dew points are starting to edge downwards this morning so it should be a bit better “feel” type day as well. The weekend looks “OK” but there are some speedbumps over the weekend that may bring at least some rain to some areas…so I’m not going to promise a perfectly dry weekend. This August has been wet for many…and it seems that while some areas are being missed…there’s been rain/storms (for some a LOT of rain) all over the place. So in this month of wetness overall for the region it seems like these systems are creating at least some rain in the area.

There are timing differences with the promised late next week cool down again today, like yesterday…but it still appears as if most of the holiday weekend may be very pleasant in the area.

The tropics are starting to wake-up a bit more as well with a system off the SE US coast that is trying to gather some organization. Right now this looks to be an ocean type storm but I’ll get more into that as well in the discussion.

Finally the Old Farmer’s Almanac came out with their winter forecast…that is below too!

Today: Partly cloudy and pleasant with highs in the lower 80s

Tonight: Fair skies and comfortable with some patchy AM fog. Lows in the lower 60s

Saturday: Variable clouds and mild with highs in the 80° range. Comfortable humidity

Sunday: Need to watch for rain chances later Saturday night into Sunday AM…not for all but the chance, especially from the KC area southwards bears mentioning. Drier in the afternoon with highs in the 80s possible although IF we have too many clouds it will be in the 70s.

So let’s start with the last topic from above…yes the Old Farmers Almanac came out with their winter forecast. These are just “fun” for some of you I think…but first let’s look back at the forecast for LAST winter. Again that was last winter…big ole swing and a miss I think…yeah we were snowy…but it wasn’t mild…and the northern Plains we’re warm and dry…at all!

So what about this coming winter?

We’ll see how that comes together…

The NHC has this as a 40% chance of development.

IF something forms of the eastern US…it might be a surf creator but overall not a big issue for the eastern US at this point. The EURO especially seems bullish in this getting to at least tropical storm status off the SE coastal area. Dorian would be the next named storm.

As far as the late next week cool-down goes…something is going to happen there…but I’m still not convinced it’s on Thursday or if it waits an additional 24-48 hours…the GFS is just a bit faster with the front than the EURO is. Both options would be on the table…but there will be a cool-down and a lower dew point air mass coming into the area.

Finally about our rain situation…

It doesn’t look like much right now…but there may be some showers around to start the day on Sunday…odds favor under 1/4″ if not under 1/10″ at this point…but it may be enough to mess up the car wash and be a nuisance during the 1st part of the day at least.

The next more widespread chance comes later Monday into Monday night with a cold front…that should usher in some drier air Tuesday and Wednesday.

So a few things happening over the next few days…

No blog tomorrow…iffy on Sunday due to weekend plans.

Our feature photo comes from Erica Kee‎ over in Kingsville, MO 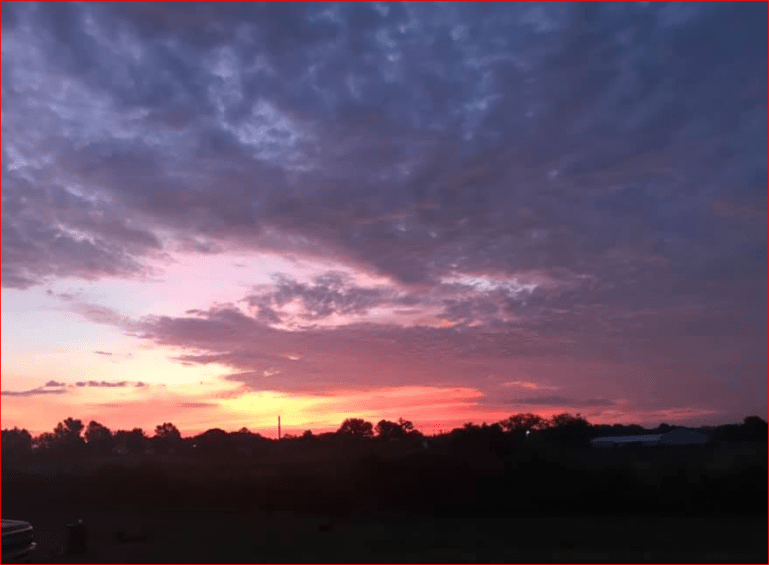 Good Monday to you...glorious weather out there with temperatures this morning in the 50s to start the day. The record is 54° set back in 1974. So no record today but we'll make a run at some potential record record values over the next few days.

This type of cool start to the month is unusual. It's the hottest time of the year on average, and we've had it pretty good for the last couple of days with more to come through Wednesday. It will get warmer as the late week and especially the weekend moves along. At some point rain will return as well when we make that transition back to the warmer weather.