One of these days (maybe Thursday) I’m going to take a day off from the blog…but with all this active weather happening it’s tough to do at this point. I want to be sure you’re in the loop as much as possible with the flooding rains…strong>severe storms and the various risks that we’ll be dealing with. The severe storm risk though will take a break…after tomorrow…for a few days…we’ll start to need to watch a couple of set-ups over the weekend but we’ll deal with that as the late week moves along.

Today: Partly cloudy and warm with with highs into the 80s. There may be a few isolated storms around as well…won’t last long.

Tonight: The main threat for storms appears to be towards northern MO. In KC partly cloudy and muggy with lows in the 60s. There may be strong to severe storms up towards the IA border tonight

Tuesday: Partly cloudy with a few storms around before 2PM. A higher risk of stronger storms after 3PM and especially after 5PM. Areas towards NW MO and NE KS will see a stronger storm risk after 3PM or so. Highs in the 80s with muggy conditions and breezy conditions too

Wednesday: Partly cloudy…a change is to put in a chance of rain from KC southwards and eastbound Wednesday night into early Thursday morning.

Well I tried to get on the golf course today…but two lightning delays conspired against me…so no go there (again). It’s been about 3 weeks sine I played last..maybe more…I don’t even remember the last time right now…the rain is a mess for all of us. More is on the way too.

While the timing is a bit more classic…roughly in that 3-9 PM timeframe for the Metro…there are going to be alterations to the types of weather we experience. There are parameters in the atmosphere showing the potential again of tornadoes…so that aspect of this can’t be ignored at this point.

I’m expected storms to form from near or west of Manhattan southwards after 2-4PM or so. Those storms would move towards the NNE or NE as the late afternoon moves along. Areas in NE KS and NW MO will be vulnerable to severe weather tomorrow afternoon. How this line comes together and how many storms form will go a long ways to determining the severe weather risks…whether it be wind/hail or isolated tornadoes as well. In some ways I can see a set-up where the storms arrive after 5PM or so…and we have to watch out again for the small spin-ups like what happened on Friday night. Something to ponder.

The SPC has placed the region in an “enhanced” risk of severe storms…this is the 3rd level of 5 in terms of the categories they issue. 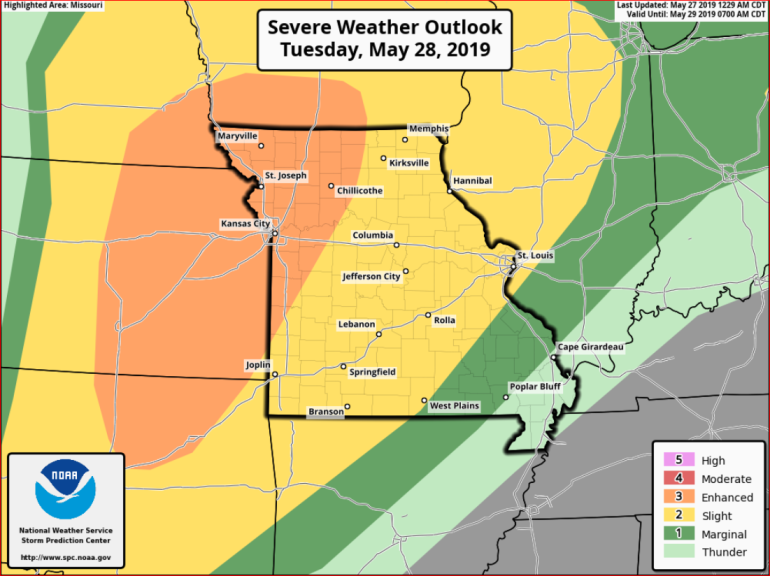 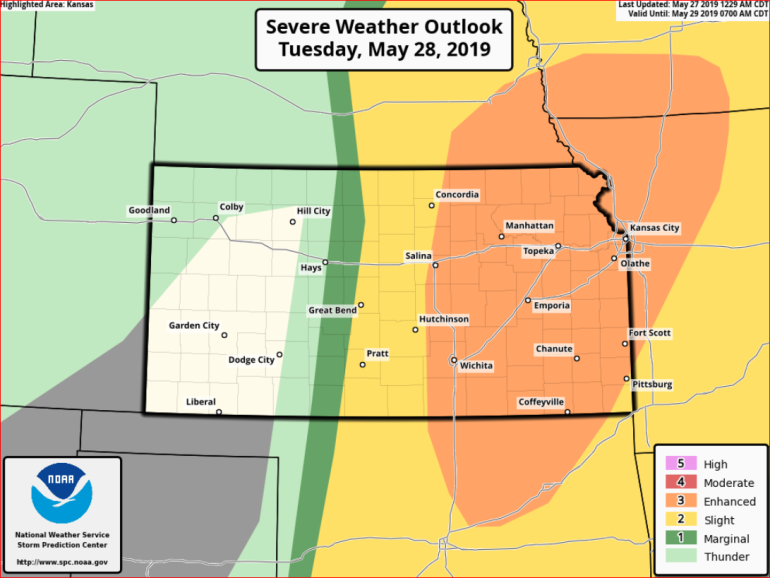 As I mentioned my expectations is that storms will pop after 3PM towards the west of the KC area…near the KS Turnpike towards Manhattan>Wichita.

There may be some pre-severe storms closer to KC tomorrow before 4PM. The issue with those would be whether or not any boundaries would be put down that then would interact with anything that moves in later on. Those are things that can’t be predicted from this point in terms of specifics but can at least be brought up as possibilities to watch for. Those small scale outflows can sometimes help enhance low level rotation aspects of additional thunderstorms.

Another thing to watch for is the cap that should hold pretty well till around 2PM or so locally in KC at least. The model data erodes this cap and there will be a LOT of instability for the storms to fire up with as the atmosphere will be strongly unstable it appears. There may be some activity BEFORE 2PM though…these would be considered “elevated” storms and form above the cap. Typically not severe for us.

What I’m watching for is some disturbance that could come up I-35 and spark the storms…there are some indications that there will be one coming…this helps to erode the PM capping that will be in place.

From there..we watch the storms advance in from the west and SW. This is where things get complicated. Will they be discrete? Will there be another squall line developing and the storms are fighting for instability as a mass instead of individually. IF that is the case…then we start concerning ourselves about those quick hitting mesovortex tornadoes again like this past Friday and last May. Typically not as strong or long lasting…but still potentially damaging.

Again there is enough wind shear in the atmosphere…mostly due to speed changes from the ground upwards to create low level rotation in the storms coming towards the region…hence the tornadic concern for Tuesday. Some of our model data is really going gangbusters for some various severe weather parameters for the region

So a lot may happen later tomorrow afternoon…and that’s why we want you to remain #weatheraware through the evening essentially.

The change that I mentioned to later Wednesday into Thursday early AM concerns a fast moving wave that is now across the PAC NW that will be dropping into northern Mexico on Wednesday AM then flying towards the northeast during the day and creating lift again later Wednesday afternoon…at first more clouds and then more rain/storms…so while the hope was, on my part last week, that we’d dry out WED>FRI…now we hope to sneak in 2 days (THU>FRI) with dry conditions.

So… how does this year compare to #KC's wettest year and it's driest? We'll, the past few weeks of rain have really given us a surge. #mowx #kswx pic.twitter.com/5fUuhWgUcx

OK that’s enough today…our feature shot comes from Becky Lewis…from yesterday. Got a few of these of the halo around the sun…this is a great example! Sun halos like this one are called 22° halos. The sun’s light goes through high thin clouds called cirrus clouds. They are composed of ice crystals. The sun’s light is refracted (light changes direction when it enters at an angle) through the crystals and boom you get a perfect halo. 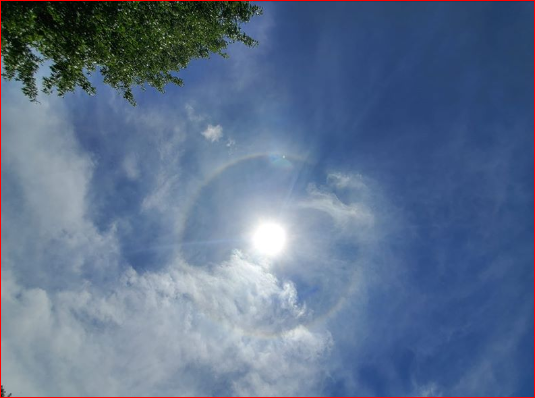